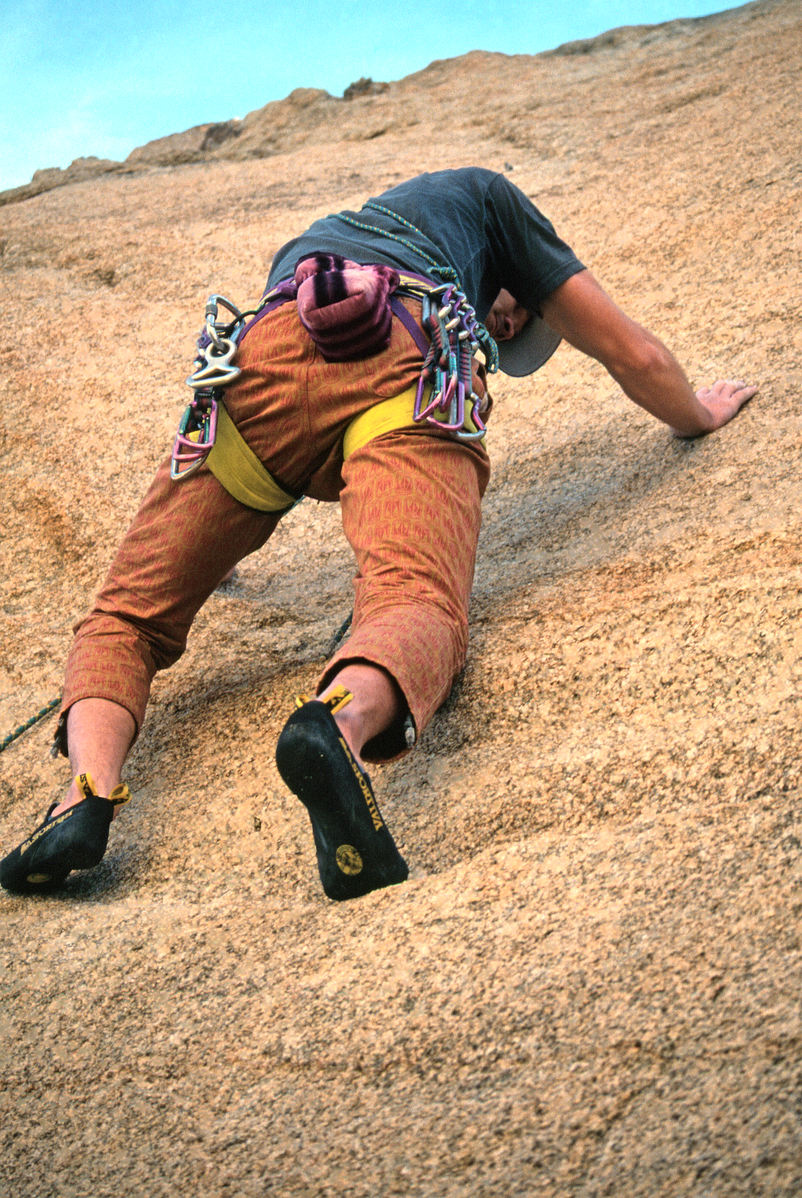 Pate has been climbing since the age of eight.
By Lindsay Bu

Emily A. Pate ’16 balls up her black winter jacket, tosses it on a bench, and walks away.

“We can just leave our stuff here?” I ask hesitantly. Maybe it’s my New York City roots kicking in, but I’m always wary of leaving my belongings out wide open in the public. She turns around and shoots me a smile.

“Yeah, definitely,” she says, and the blonde bun on the top of her head gives a little bounce as she nods. I look around the Brooklyn Boulders climbing gym and feel a sense of reassurance.

It’s very hip. The walls are covered in vibrant graffiti: Spiderman stares at me from one corner of the room, orange fire frames every door, and neon pink tags span long corridors. It’s strangely, almost a little uncomfortably, reminiscent of a startup. The place is huge and open. Upstairs there’s even a workspace, furnished with long wooden tables and brightly-colored bouncy balls as chairs, offering an unobstructed view of the climbing walls. “It’s more of a lifestyle gym than a serious climbing gym,” Pate later tells me.

Pate has been climbing since the age of eight. She was raised by a gymnast mother and a mountaineering father, and she used to compete in the USA Climbing Youth Circuit. Despite her small frame—she looks just a few inches over five feet—she is clearly in incredible shape. Her arms and shoulders are toned, and she walks in rubber climbing shoes with light grace.

Pate excels at bouldering, which is a form of rock climbing performed without the use of ropes or harnesses. Artificial bouldering walls are usually less than 20 feet high, and climbers scale them using colorful bulges. A set of the same-colored bulges is called a “problem.” Problems are ranked on a V-scale, starting at V-0 and going all the way up to V-16.

The problem that Pate is currently working on looks difficult, but her climbing itself looks effortless. At one point her legs cross over one another as she almost dances across the wall to stabilize her footing; at another, she inverts her knee inward like a wheel to reach for another protrusion.

Sitting on the padded blue mats, I watch her in awe along with the company of her friends who cheer her on. There were four other Harvard students at Brooklyn Boulders by the time Pate and I had arrived: Ian G. Grant ’17, Eliza S. Hale ’16, Kevin A. Hornbeck ’16, and Evan R. Sandhoefner ’17. They’re all in good spirits, with white chalk on their hands and grins on their faces.

Eliza tells me that, beyond climbing, coming here is a nice way to hang out with friends. “Half of it is sitting on the mat and talking to people,” she says. Kevin nods in agreement.

They’re here quite often, too. On weeks with heavy workloads, they all come around two or three times a week, and on weeks with more downtime, they aim for between four and five visits. The group also has a diverse range of experience in bouldering: Ian started in high school, Kevin began three months ago, Evan has been climbing since freshman year, and Eliza was brought to Brooklyn Boulders for the first time by Pate during the fall of their sophomore year. Regardless, they all seem equally enthusiastic and eager to be here with everyone else. 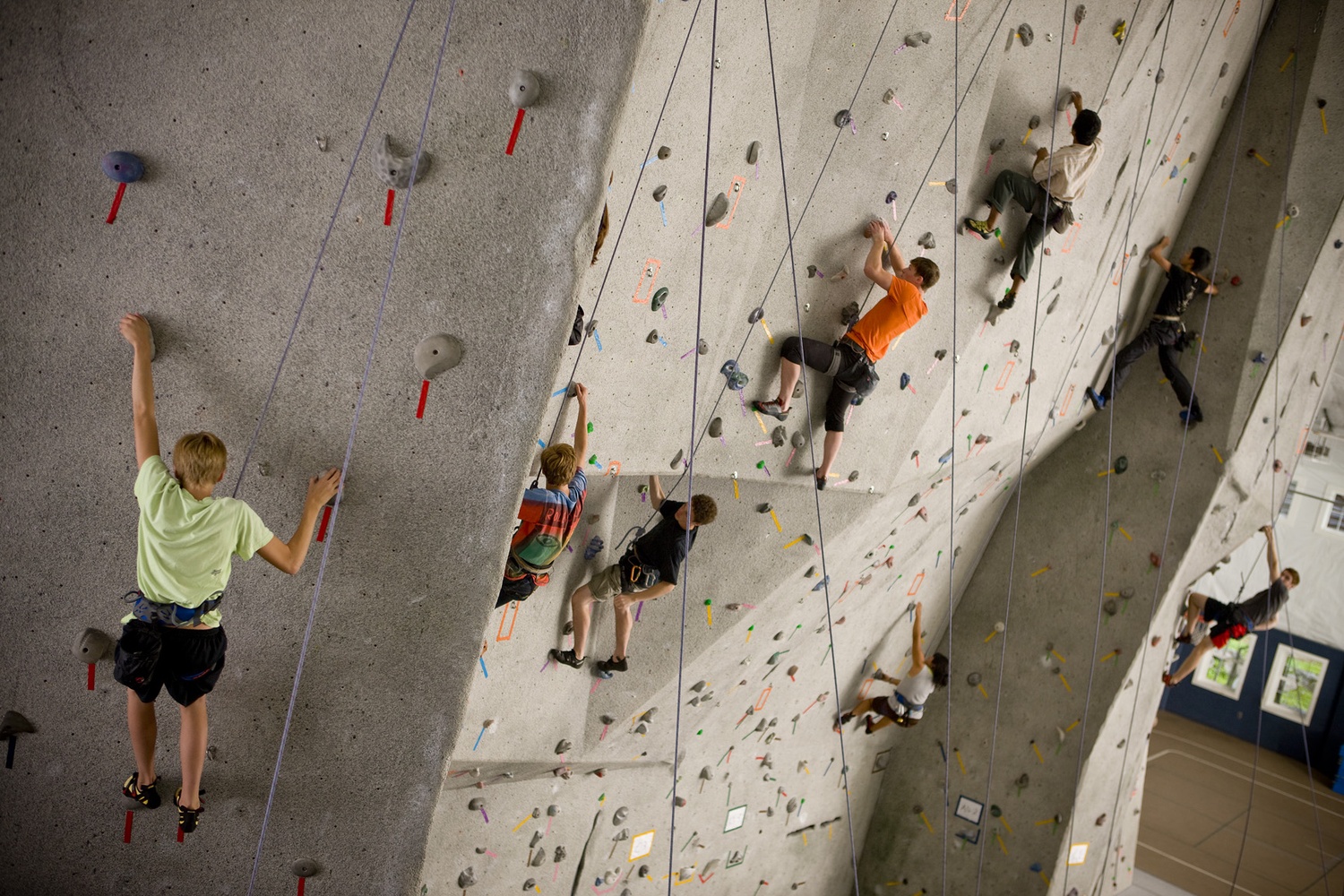 “I used to play tennis when I was younger, but bouldering is a lot different,” Pate says. “[Bouldering] can still be just as competitive, but, in many ways, everyone is a lot more encouraging.”

Perhaps that’s because the sport is just as mentally taxing as it is physically. “It’s really cerebral,” Ian says. “When you’re having trouble with a problem, you have to think creatively about the different ways you can approach it.”

Thankfully, the climbers have each other to help out. They watch each other climb and constantly shout words of encouragement. When one person falls or slips, the friends make suggestions as to what he or she could have done better. Maybe you could move your foot here, or grab that with your right hand instead, they say.

Together, they form their own sort of world. Beyond the gates of Harvard—the math problem sets, response papers, blocking group drama, and sometimes stressful social scene—there are five Harvard students covered in chalk, laughing and making their way up walls in a hip Somerville climbing gym.