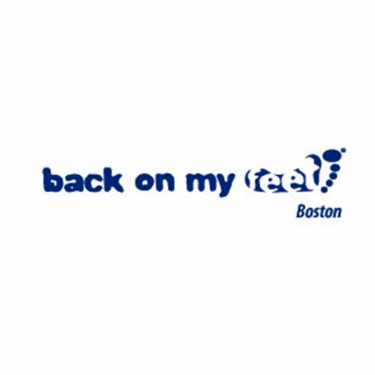 Taking Small Steps: A Run with Back On My Feet Boston

The organizations is aimed at fighting homelessness through a combination of extending community resources and promoting fitness.
By Hana S. Connelly

I show up to the "Back on My Feet" event at Barbara McInnis House in South Boston on an unusually balmy Wednesday at 6:30 a.m. The four runners gathered in the lobby look ready for anything, though running would not be my first guess. One woman holds onto a walker, another man leans on a cane, and a younger man walks with a limp. All of them have been walking or running—decked out in “Back on My Feet” gear—through every kind of weather Boston threw at us this winter. They are consistent participants in the nonprofit, which aims to fight homelessness through a combination of extending community resources and promoting fitness.

Today, the team is walking a two-and-a-half-mile loop up less-than-scenic Albany St., an urban area near a large highway interchange. We split into smaller groups; one participant lopes ahead, a large Dunkin Donuts iced coffee swinging by his side in rhythm with the chain around his neck. The two older men of the group stroll behind us alongside a volunteer.

I walk with Kathleen Lau, Back on My Feet’s program director, and Donna, whom Kathleen introduces as “a speed demon with a walker.” Decked out in leggings, a black windbreaker, bright sneakers, a white baseball cap, and a fluorescent yellow backpack, Kathleen looks like one of Boston’s most committed marathoners. In fact, she explains that she became involved with Back on My Feet after seeing their logo worn by other runners during a race. Now, she spends her mornings walking or running with one of seven community groups and her days recruiting and figuring out logistics for the organization. She has helped bring Back on My Feet into its sixth year, working with participants who are dealing with homelessness, unsteady housing, treatment programs, or recent incarceration. The volunteers who walk or run with them include doctors, retirees, and college students.

Many participants get involved with Back on My Feet at their doctor’s recommendation, because of health problems that can be addressed through exercise. Donna interrupts Kathleen’s pitch with her personal story: “I’ve lost 260 pounds with Back on My Feet. I weighed about 500 to begin with.” Now, she sets the pace for both Kathleen and me as she deftly maneuvers her walker over the bumps and twists in the sidewalk.

“I didn’t think you were gonna make it when you first started,” Kathleen says, in awe. “I don’t know how you did it, lady.”

Participants like Donna face challenges beyond health problems. When she first became involved with Back on My Feet, Donna was living in cramped, unsanitary housing so bad that it was eventually reported to the city. The organization, though, was up to the challenge: They aim to create a citywide network that can refer participants to jobs and housing. Forged through countless 5:45 a.m. runs in rain, snow, or shine, the group also provides support for members struggling with sobriety. “[A] couple people will still call me if they think they’re gonna use,” Donna tells me.

We turn back early at Donna’s request. This has nothing to do with her walker, which has not stopped her from participating in races—“You get lost, but you make it,” Kathleen laughs—and has certainly not slowed her down today. “I want to look for anyone who might have gotten stuck behind us,” she explains. “I like to watch out for everyone who walks with us.”