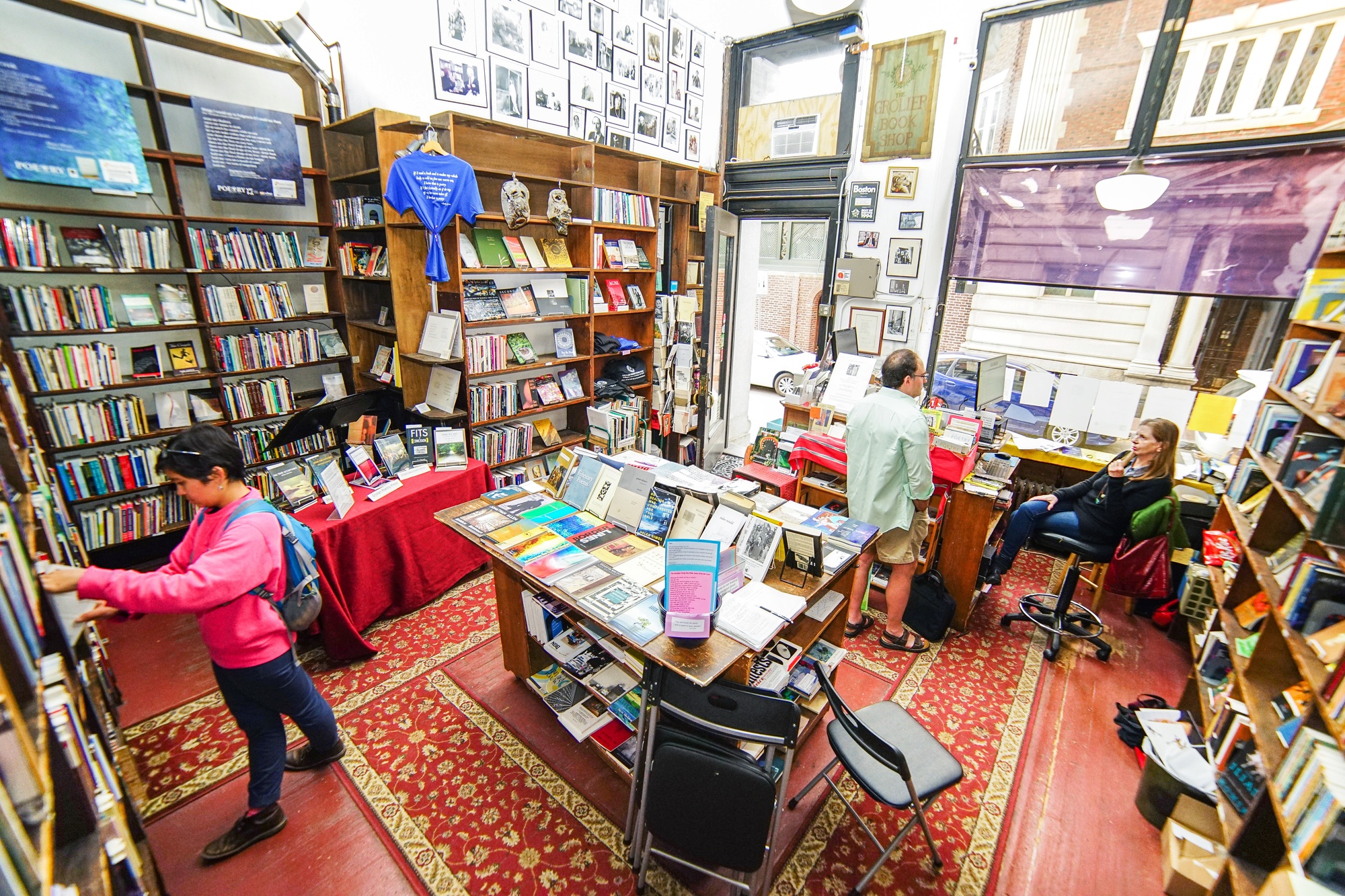 Grolier Poetry Book Shop is located on Plympton Street, right off of Harvard Square. It has been around for 90 years and is associated with famed Harvard poets, including T.S. Eliot.
Advertisement
Advertisement

​Behind a creaky door lies nearly a century of poetic history: The Grolier Poetry Book Shop has been an integral part of the Harvard Square community since 1927, making it the oldest continuously-run poetry shop in the US.
By Hayoung E. Ahn and Rachel H. Janfaza

Behind a creaky door lies nearly a century of poetic history: The Grolier Poetry Book Shop has been an integral part of the Harvard Square community since 1927, making it the oldest continuously-run poetry shop in the US. On the Grolier’s 90th anniversary, FM speaks with Ifeanyi A. Menkiti, who became the owner of the shop in 2006.

Menkiti was born and raised in Nigeria and came to the U.S. to attend Pomona College, where he studied philosophy and literature. At Pomona, Menkiti received an award for his thesis on Ezra Pound, which he highlights as the starting point of his fascination with poetry.

“I came to have a great deal of respect for Pomona,” Menkiti says. “That this fine American college didn’t second guess themselves, that they had the guts, the courage to give the top prize in the English department to an African student—it showed integrity.”

Menkiti went on to become a professor of philosophy at Wellesley College, a position from which he retired in 2014. While teaching at Wellesley, he purchased the Grolier.

“I had this association with good vibes about poetry from Pomona. I believed in the longevity and continuity of the language,” Menkiti says. “The fact that [the Grolier is] still there when the big companies like Borders and Barnes and Noble are being swallowed up by Amazon shows how poetry can help to move the world along.

“After 9/11, people didn’t ask to read a book of history, or a novel—they wanted to read a book of poems,” Menkiti says. “In a time of happiness or discomfort, people seem to fall back on poetry. What is it about poetry that has this hold on us, that allows it to be a source of solace, grief, and celebration?”

Menkiti proposes that poetry’s association with music could be a potential explanation. “It seems to me that music is hardwired in our brains. In language, there is musicality, rhythmicity, and cadence. You see the orchestrations of the rise and flow of the human voice. Sometimes we forget the musicality that is in the ordinary language of the human tribes of the world.”

In the coming months, Menkiti has a few events planned for the bookstore’s 90th anniversary. On November 14, he plans to show the poetry of Donald Hall and e. e. cummings set to music at the Oberon Theater. If all goes well, he hopes to throw a gala in the spring, and an event at Sanders Theater. Finally, he intends to close down Plympton Street in April or May for a street party with live poetry readings, music, and food.

Raucous anniversary celebrations aside, there is something pleasantly steady about Grolier Poetry Book Shop. As campus construction and Square reshaping continues around it, the Grolier is still embedded firmly on Plympton Street, unchanging. Menkiti thinks poetry has a similar sense of finality.

“Once a poem is finished, it’s done. If you are writing a letter, you might say, ‘Well, I really want to make a very strong point,’ so you tweak the letter a little bit and you can play with it,” he says. “But there’s something about the poetic form that is done. You cannot change centuries of tradition.”