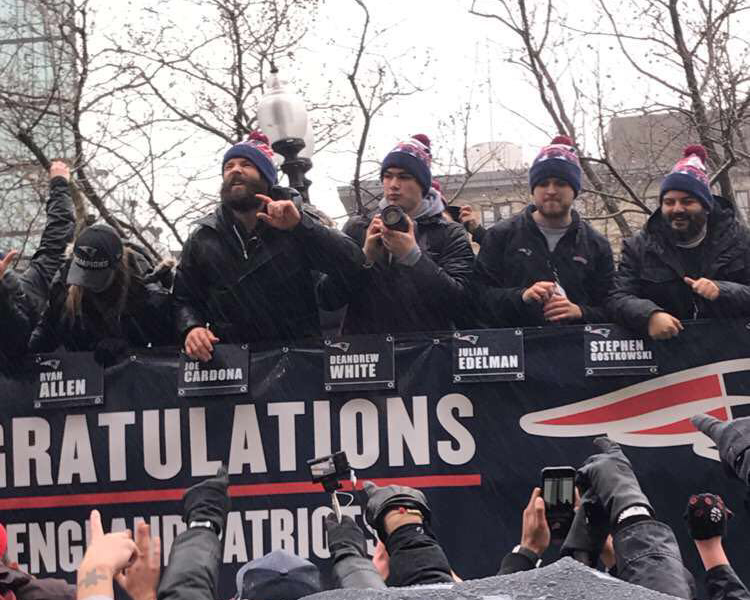 One for the Thumb: Patriots Parade

Even after a 45 minute delay, snow-covered New Englanders were lined up 10 bodies deep along the parade barricades.
By Aidan M. Fitzsimons

The spirit of New England has never seen a more fitting showcase than the Patriot’s fifth Super Bowl victory parade last week. On that bitterly cold, blustery morning, hundreds of thousands of Pats fans lined the parade route stretching from Boylston Street to City Hall. The weather seemed to deter no one. Even after a 45 minute delay, snow-covered New Englanders were lined up, five to ten bodies deep, along the parade barricades. They brought their Patriots hats, fanmade signs, and more Brady jerseys than Brady has passing yards (around 61,582).

Fans leaned out of windows and thronged along sidewalks from Berklee College to Boston Common. Although this is the fifth Super Bowl ring for Brady and Coach Belichick after 16 years of consistent divisional and conference dominance, the excited fans mucking about in the slush didn’t seem to take their 21st century football dynasty for granted.

The parade kicked off with Boston’s famous duck boats, vehicles that carry tourists around the city by land and by sea. Cannons mounted on the sides of trucks fired heaps of red, white, and blue confetti, which descended joyously onto the throngs of elated Bostonians. The players rode decorated truck beds, and each passing group of heroes inspired more and more frenzy from the fans. Tom Brady, referred to on many signs as the “G.O.A.T.” (Greatest of All Time), hoisted the Lombardi Trophy, eliciting wild cheers. Wide receiver Julian Edelman, who made The Catch that saved Patriots Nation in the fourth quarter, also easily riled up the crowd. Tight end Martellus Bennett and running back Legarrette Blount blasted Migos’ smash hit “Bad and Boujee” as they danced in celebration. Injured tight end Rob Gronkowski was acting like classic “Gronk,” catching the many beers the crowd threw to him.

The bad blood between New England fans and NFL Commissioner Roger Goodell over Goodell’s disciplining of Tom Brady in the 2014 “Deflategate” scandal simmered openly. Brady handled himself maturely at the Super Bowl, shaking Goodell’s hand despite the quarterback’s four-game suspension at the start of the season. Patriots Nation, however, was more keen to relish their vengeance than to let bygones be bygones. After Pats Defensive Coordinator Matt Patricia wore a shirt depicting Goodell as a clown on his flight home, the floodgates were opened.

“Fahk Rawgeh!” “Brady, Brady!” and “Fire Goodell,” they yelled, holding signs that read, “One last finger for Roger,” “Deflate these!” and the subtle, “Roger That.” While this conflict may seem a little childish to outsiders, the fairy-tale nature of Brady’s redemption story is hard to ignore.

After the festivities ended, wet confetti and hundreds of empty nib bottles were the only lingering reminders of the parade. Of course, there’s always next year, and Brady does have a whole other hand for more championship rings. Ready the duck boats!