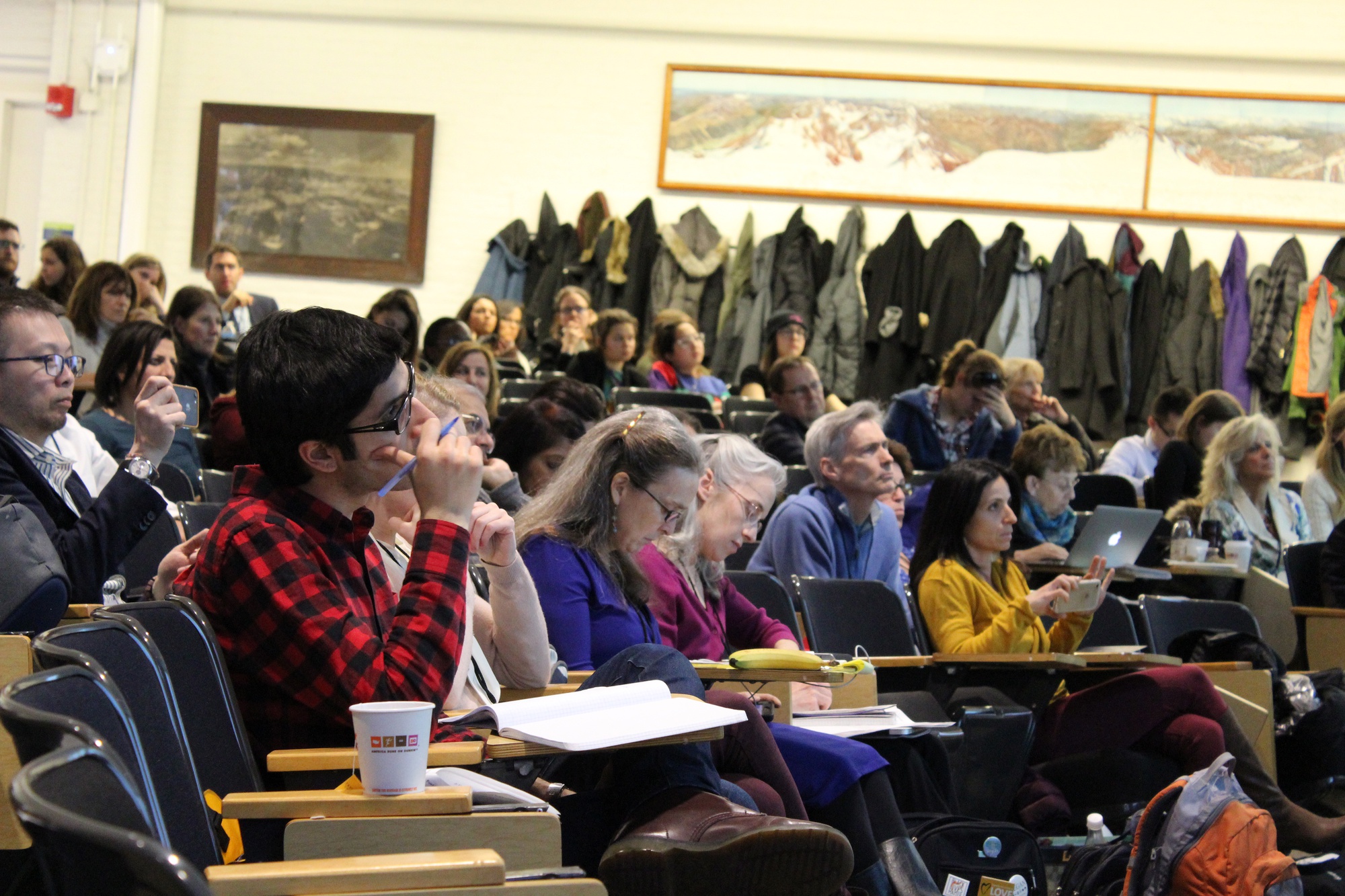 Attendees of the 2017 Ivy League Vegan Conference, which was held from March 24 to March 26.
Advertisement
Advertisement

“The purpose of the conference is to open up a dialogue about the potential power of plant-based diets to address the heaps of global issues,” Nina Gheihman, co-organizer of the conference, says.
By Frank M. Cahill and Norah M. Murphy

From March 24 to 26, Harvard hosted the 2017 Ivy League Vegan Conference—and there wasn’t a sign-wielding animal-rights picketer in sight.

“We really are focusing not on trying to convert or influence people’s personal ideologies,” says Nina Gheihman, a Ph.D candidate in Sociology and co-organizer of the conference. Instead, the conference presented itself as a platform for educational outreach and academic dialogue, attracting an audience less radical than one might expect: Students, academics, vegans, and non-vegans were all welcome at the event.

“‘Vegan’ is… not necessarily the best word because it does have this activist association,” Gheihman says. “The reason we use the word ‘vegan’ is because it’s just the most familiar colloquially. It’s a mouthful to say ‘plant-based’ or ‘bioethics.’”

For Gheihman, “veganism” is an easily accessible term to describe the intersection of many related fields—among them sustainability, environmentalism, animal rights, and food security. “The purpose of the conference is to open up a dialogue about the potential power of plant-based diets to address the heaps of global issues,” she says.

The Ivy League Vegan Conference is described by conference organizers as an “event concept,” meaning that there is no single event-organizing body. Instead, an affiliated organization at each participating school, such as the Harvard or Cornell Vegan Societies or the Yale Animal Welfare Alliance, spearheads the organization of each conference. The first was hosted by the University of Pennsylvania in 2012, and this year’s event, held at Harvard, was the largest yet with over 300 attendees.

The Harvard Vegan Society, a club open to students across all of Harvard’s schools, organized this year’s conference. Gheihman serves as the club’s president, and Matthew N. Hayek, who just completed a Ph.D in Environmental Science and Engineering at GSAS, is the club’s vice president. Both played a central role in organizing this year’s Ivy League Vegan Conference.

Reflecting the conference’s mission, a diverse line-up of speakers were invited to discuss a number of topics pertaining to veganism. On Friday, Law School professor Cass R. Sunstein spoke on behavioral economics and public policy. Another Law School professor, Kristen A. Stilt, addressed export practices of farmed animals. Saturday and Sunday featured various presentations and panels exploring topics from aquaculture and ocean ecology to biotechnology and its effects on public health.

This year was the first year that sponsorship played a role in the conference, and it left a corporate fingerprint. Stationed at the conference’s entrance in front of a shimmery pink curtain, Unicorn Goods, “the world’s largest vegan store,” sold clothing and accessories. Whole Foods provided lunch on Saturday and Sunday, and Purple Carrot, a plant-based meal-kit service, sponsored Saturday’s reception. These sponsors, organizers say, are helping make the idea of a plant-based diet more visible in everyday life.

“Right now, veganism is seen as this fringe movement and the [Ivy League Vegan Conference] is a really good concept to legitimize the idea of veganism and make it into a mainstream academic issue that’s worthy of serious engagement,” Hayek says. “It was incredibly important for us to highlight for people what the future of food tastes like. It tastes great.”