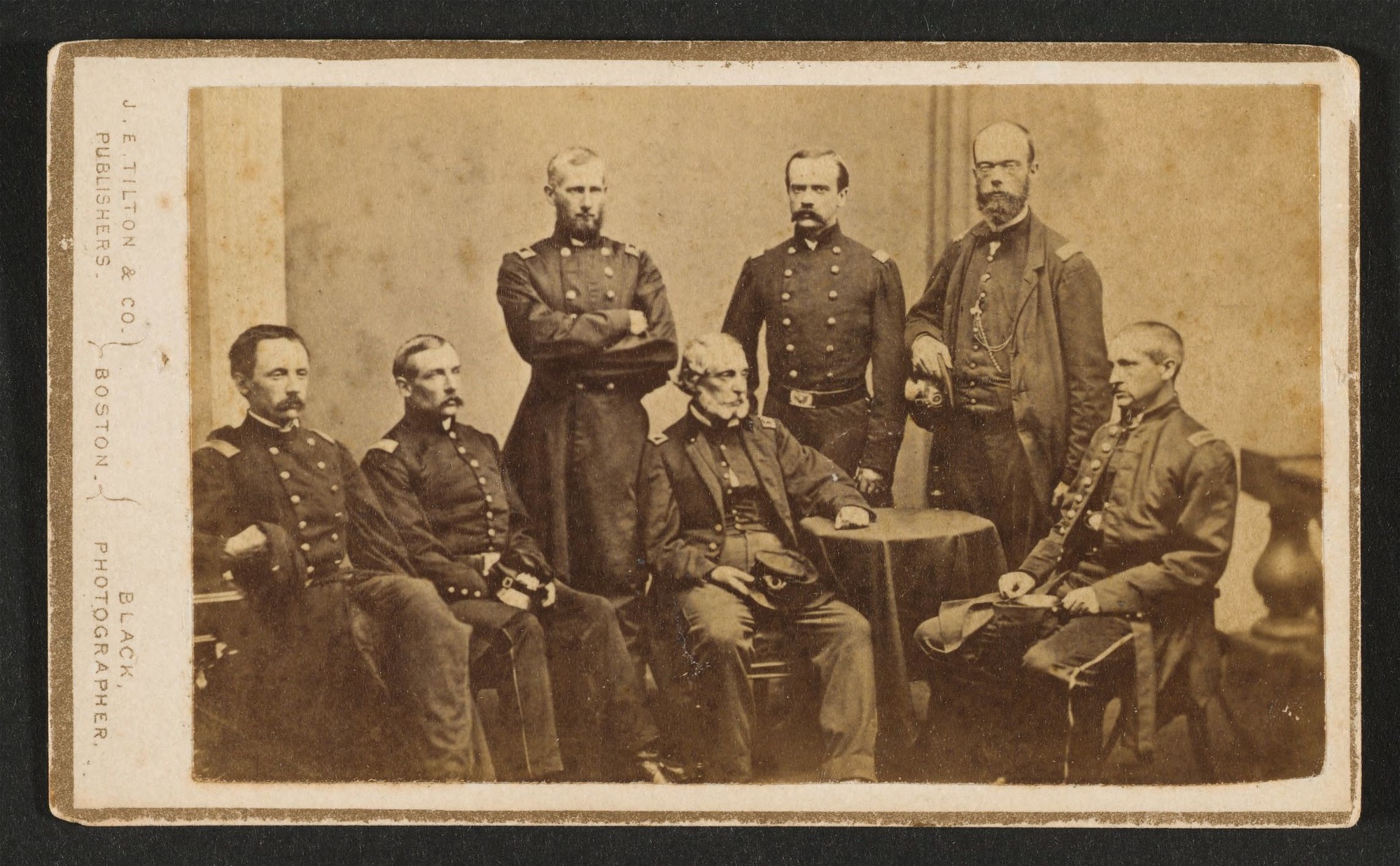 An 1861 photograph shows the surgeons and military leaders of the 20th Massachusetts Infantry Regiment. Paul J. Revere, Class of 1852, is fourth from the left.
Advertisement
Advertisement

"A Forgotten Name": The Harvard Regiment of the Civil War

The Twentieth Massachusetts Volunteer Infantry, was nicknamed the “Harvard Regiment” for its close ties to the College.
By Walter N. Paiva

When the first shots of the Civil War rang out at Fort Sumter on April 12, 1861, civilian soldiers mobilized from all corners of a divided nation. Harvard students were some of the many to heed the call.

One of these military units, the Twentieth Massachusetts Volunteer Infantry, was nicknamed the “Harvard Regiment” for its close ties to the College. If not fully a misnomer, the nickname at least mischaracterized the true composition of the force. According to Civil War historian Richard F. Miller in his book “The Trouble with Brahmins”, about half of the regiment was foreign-born. The leadership, however, better reflected the epithet: Seventeen of the regiment’s 36 officers had connections to Harvard.

Among the many Harvard students and graduates in the Harvard Regiment, several names stand out––for better or for worse.

Paul J. Revere, Class of 1852, carried the namesake of his famous grandfather but garnered praise in his own right. An unidentified friend described him in an 1867 letter as “brave, even among the bravest,” a man with “coolness, and sound sense, and a sentiment of honor that never failed.”

Norwood Hallowell, Class of 1861, was a white abolitionist who went on to command a primarily black regiment. According to Miller, Hallowell earned a nickname: “The Fighting Quaker.”

Henry L. Abbott, Class of 1860, crafted a legacy as one of the war’s most famous soldiers and tacticians. He was also xenophobic: He wrote to his mother that “the more foreign a regiment is, the more cowardly it is.”

Infused with patriotic vigor and

more than a little racism, the Harvard

Regiment boarded a train and made its way south.

In a letter dated September 15, 1861, Revere, writing from Poolesville, Maryland, just before the Twentieth faced battle the first time, detailed the allure of an unfamiliar land. “The country is very beautiful,” he wrote. “The trees are very fine; all the trees that we have at home, except elms and maples, and many that we do not have,—ever-green-oaks, gum-trees, and many others. The oaks are the finest that I have ever seen.”

But Revere’s idyll was short-lived. On October 21, 1861, the Union army endured a major defeat at the battle of Balls Bluff. The Harvard Regiment suffered 281 casualties, according to William F. Fox’s book “Regimental Losses in the American Civil War.” Revere survived but was taken prisoner, as was Colonel William R. Lee. The Harvard Regiment was left depleted and demoralized.

From that point on, the regiment continued on a tumultuous course. Leadership changed hands many times, and infighting grew within the ranks.

Tensions heightened in December 1861, when members of the Harvard Regiment imprisoned fugitive slaves and returned them to their oppressors. A letter delivered to Massachusetts g\Governor John A. Andrew noted that an officer had ordered “a Sergeant and a file of men with loaded muskets to escort the prisoners to their supposed owners.”

By the end, the Harvard Regiment had fought in most of the major battles of the Civil War. It had suffered through the carnage of Antietam and Fredericksburg, fought to repel Pickett’s Charge at Gettysburg, and helped to ensure a final Union victory at Appomattox.

The Harvard Regiment returned to Boston in 1865, shortly after the Confederate surrender. It had incurred more casualties than any other regiment from Massachusetts, and all but four regiments from across the Union.

Eventual-Supreme Court Justice Oliver Wendell Holmes Jr., Class of 1861 and also a member of the Harvard Regiment, reflected on the unit in an 1895 Memorial Day address. “The Twentieth,” he said, “has shrunk to a skeleton, a ghost, a memory, a forgotten name which we other old men keep in our hearts.”

Contrary to Holmes’s remarks, construction on Memorial Hall began soon after the war. Today, the towering Hall stands as a monument to the Harvard affiliates who died fighting for the Union.