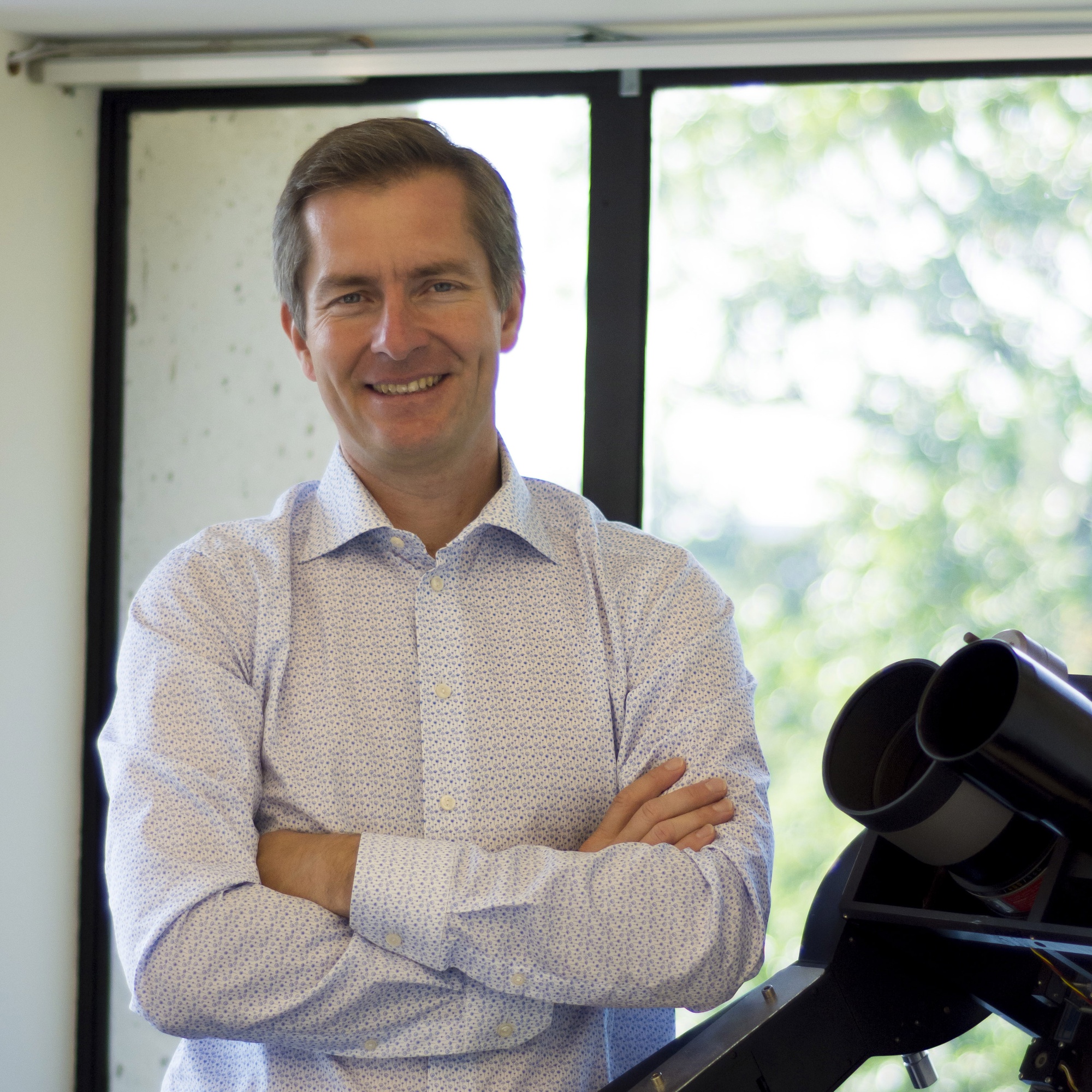 David Charbonneau was into exoplanets before they were cool.
By Ben G. Cort

A squat, chest-high hunk of metal sits in the corner of David Charbonneau’s office. It’s a telescope he cobbled together out of cheap parts while he was at graduate school, where he discovered his first exoplanet: a planet that orbits a distant star. Since then he has become an astronomer at the Harvard-Smithsonian Center For Astrophysics, a Professor in Harvard’s Department of Astronomy, and a recent recipient of the Blavatnik Award For Young Scientists. He keeps the telescope around not as a trophy, but as a reminder: don’t take shortcuts or you’ll spend all your time fixing cheap telescopes. Editor’s note: this interview has been edited for length and clarity.

FM: How did you originally get interested in cosmology and space?

DC: I remember in high school, in the summer, I was sitting out in the driveway and I was trying to read “A Brief History of Time” by Stephen Hawking. If you’ve ever read this book it covered all the big ideas–all the magical parts of physics and cosmology–like special relativity and quantum mechanics. Looking back now I realize that I didn’t really understand all of that. It was more sort of a form of poetry that really was speaking to something in me that I wanted to get out and explore.

FM: Could you walk me through how you got to making that first discovery?

DC: I moved from Canada and came to grad school here at Harvard. I was absolutely certain I knew what I wanted to do: theoretical cosmology. I got here and the first exoplanet had just been discovered a few months before. I got very excited. I was offered a project by a professor here named Bob Noyse. It just seemed so practical to me. Everyone was working on cosmology.

With exoplanets, nobody was working on it, and so it seemed like there was an opportunity to make a big contribution as a student. I decided to jump in. For my thesis project I went out to Colorado. I was working with a guy named Tim Brown in Boulder. We were looking for planets by transit. When they pass in front of a star, they block some of its light. We struck gold, and took the first measurement of a transiting planet. That was in 1999, and I never looked back.

FM: What projects are you working on now?

DC: The big thing that I want to help bring about is to proceed as quickly as we can to try to look for life on other planets.

There is a knock on the door.

I’m going to stop to get some coffee.

A pause as Charbonneau’s coworker pours him some coffee.

FM: How do you take your coffee?

Okay. So what I want to do is to try to help humanity figure out if it’s alone. The specific project I run is the MEarth project. It’s two robotic arrays of telescopes, one in Arizona, and one in Chile, so that we can see the whole sky. We’re searching all the very closest stars, and we’re looking for these eclipses of planets that are like the Earth. Then after we find them then the idea is that we’ll use future telescopes to look at light that passes through the atmosphere of the planet and imprinted on that is basically a little signal that says: “Hey! There’s life on this world.”

FM: Do you view life elsewhere in the universe as an inevitability?

DC: I’m truly open minded about it. I think that there’s great optimism that there is life on planets orbiting nearby stars because ten years ago we didn’t know if there were such planets, and now we do, so we’ve made enormous progress. My contribution as an astronomer is to constrain whether [life] is common or not.

FM: Do you enjoy sci-fi media?

DC: What do you think?

FM: I would imagine yes, although I have met some scientists who are very “I just do science.”

DC: But are they happy? Happy scientists?

FM: I think less so.

DC: Of course I love it!

FM: What’s some of your favorite sci-fi?

DC: When I was growing up, “Star Trek: The Next Generation” was the thing. If you look at some of the recent sci-fi that’s come out, if you look at “Interstellar”—it’s an enormous story, and I’m a dad with daughters so there’s a relationship there. The future of humanity being tied to the ability to find and get to distant planets. So yes, I love science fiction. I hate it when science fiction movies turn into car chases. I don’t mind car chases, but that’s not really science fiction.

FM: If commercial space flight ever takes off, do you see yourself wanting to go to space one day?

DC: There’s a big problem there. I’m not allowed to be an astronaut because I’m too tall.

DC: But if it’s commercial maybe those limitations won’t be there. I would be very interested in going. Who wouldn’t be? I guess there’s the element of danger. I’m sure you’ve heard this quote before, but I just saw this recently so I’ll say it. “A ship in the harbor is safe, but that is not what ships are for.” So yes, nobody will die in space if we don’t go to space. But that’s not what we’re here for. We are explorers, surely.

FM: What are some of your non-space interests?

FM: Do you think your daughters are going into the sciences after you?

DC: They’re young. The oldest is 11 and the youngest is four. So they don’t all have to be astrophysicists. Some of them could be astrobiologists maybe. Really branch out. They’re at this age where they say: “I’ll be a firefighter!” “I’ll be a farmer!” Or, “I’ll be a doctor!” I really think one of them should be the president. I think that would be a very good thing.