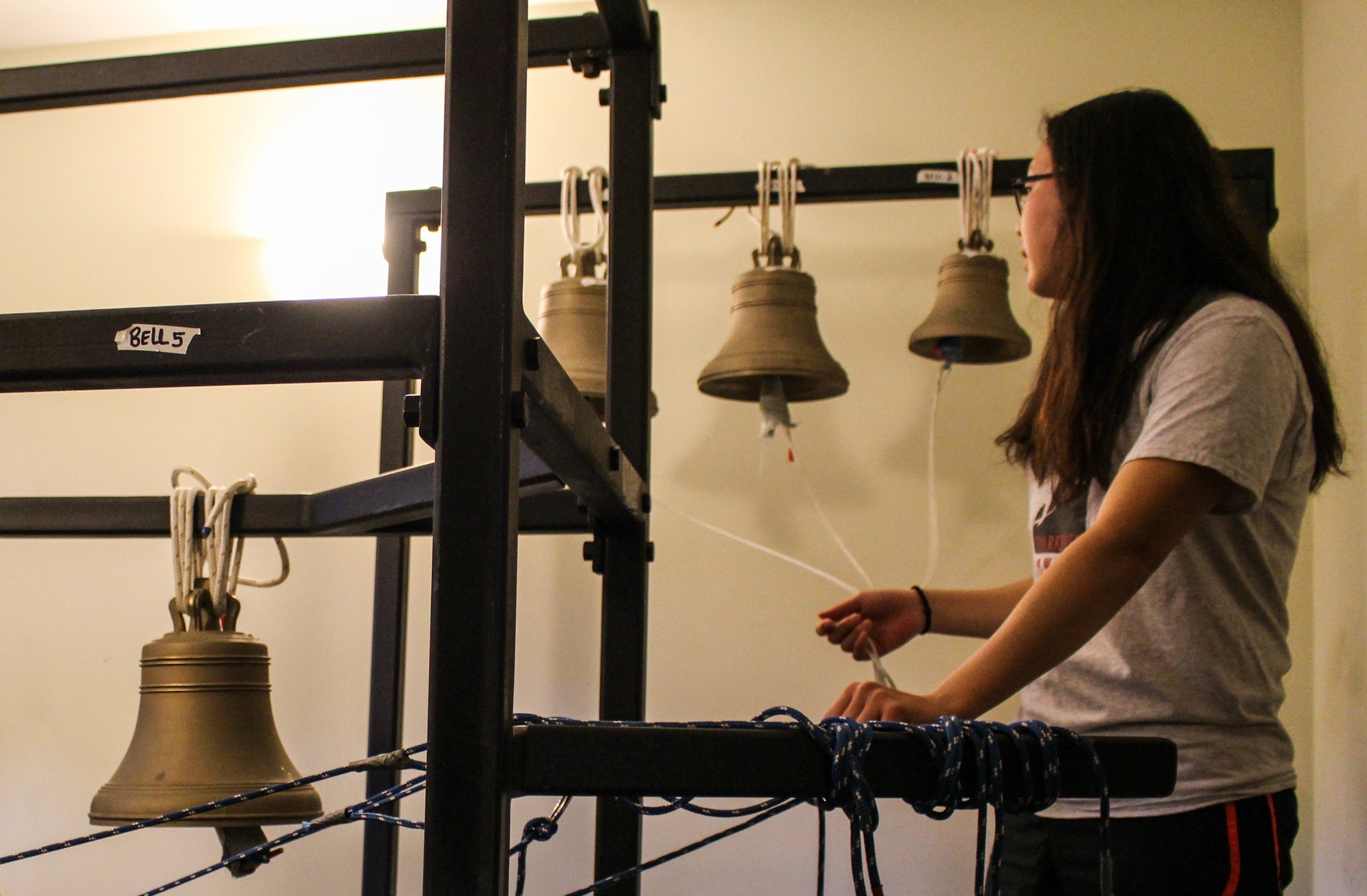 Jessica Ding '19, a member of the Lowell House Society of Russian Bell Ringers, rings the bells in the basement of 20 Prescott Street. By Hayoung Hwang
Advertisement
Advertisement

Notes from the Underground Bells

The bell ringers remain patient, awaiting the day they can return to their perch in Lowell. Until then, they are content with their humble practice set and the memory of their former glory.
By Natasha P.B. Lasky and Olivia G. Oldham

In a small, beige room in the basement of 20 Prescott, Jessica Ding ’19 and Peter Z. Hartnett ’19 yank on ropes and stomp on a floor pedal to clang several suspended bells. The sound fills the room and rings in your ears — but in gaps of silence, the hum of a vacuum and the drone of the laundry machines seep through. None of the grandeur of their former home, the Lowell bell tower, is present in their swing-housing practice space.

A set of Russian bells once sat atop Lowell House, sounding out deafening, harmonic peals every Sunday at 1 p.m. For years, The Lowell House Society of Russian Bell Ringers ascended the belltower every week to play a wide range of material for Lowell House denizens ranging from tonal improvisations to Taylor Swift’s “Shake it Off.” Depending on who you ask, they’re either keeping alive a sacred tradition of Russian bell-ringing and promoting cross-cultural dialogue ­­— or robbing Lowellians of their afternoon naps and study sessions.

But during the renovations over the past two years, Lowell’s massive bells sat idle: “Mother Earth,” the whopping 13-ton bell with a seismic roar, no longer pounded the hungover heads of Lowell residents. Instead, the Bell Ringers have gone underground — literally. They now spend their Sundays ringing a scant collection of tiny bells in the basement of Prescott. What was once an out-of-body experience that lured freshmen begging to ring Mother Earth herself is now “kind of sad,” according to Evander L. Price, a Bell Ringer and a Lowell House tutor.

According to Ding, who may or may not have changed her last name to accommodate her Klappermeister lifestyle, “Attendance is thin.”

“Bell ringers are a little bit in danger,” Price says. “No matter what, the tradition isn’t going to die, but this is the thinnest [the] bell ringers have ever been.”

Ding is trying her best to attract new members to the Society of Russian Bell Ringers, but, without the bell tower, her job has gotten significantly harder. After all, she told us, sitting in the noticeably bell-less Lowell Inn, that she originally joined the Society of Russian Bell Ringers for the view. “You got a really great view from Lowell bell tower… I’m looking at the picture…” She gestured back towards a postcard-perfect picture of the old Lowell bell tower hanging on the back wall of the dining hall, which offers a stark contrast to the squat, fluorescent-lit Lowell House Inn. “You got a great view of the river, the Boston skyline,” she says wistfully.

The old bell-ringing lifestyle breached on fanaticism, and members still cling to their glorious past. Price describes sacrificing all to hear the bells at their purest form, sans earplugs. He likens the experience to looking right at the sun: painful, exhilarating, and entirely worth it. “You’ve gotta do it once. You won’t go deaf. Right? Right? I’m not a doctor.”

But right now the only way to experience the earth-shattering clang of the Lowell House bells is in a disappointing online simulation. And the Prescott replacement bell set is underwhelming at best. “It’s a little sad,” Price says. “There are just a few bells down there, in the basement. It’s not the inspiring experience of having your entire body vibrated by Mother Earth. It’s, uh, uniquely not transcendental.”

“One of our bellringers really wants to learn ‘Call Me Maybe’ but it’s pretty hard on our practice set,” Ding says.

Even in the absence of the bell tower, though, the Society for Russian Bell Ringers have found other ways to amuse themselves. Ding and Price collaborated on an April Fool’s prank in which they told the unsuspecting Lowell House email list that their signature bells had been permanently relocated to the Eliot House bell tower. Nobody fell for it, but Ding got a few encouraging notes saying “Well played.”

Moreover, this summer the Society emerged from their subterranean lair to embark on their annual trip to Russia. They spent two weeks studying the art of bell-ringing with Father Roman of the Danilov Monastery. Roman is the “Justin Bieber” of bell-ringing, according to Price. A six-foot-four master bell ringer with a long beard and “sparkling eyes,” Father Roman can lead you up to any sacred belltower in all of Russia with a snap of his fingers. This man does not use earplugs — some say he has transcended entirely. Ding cites the fascinating history of the bells as her reason for involvement, but, at the very least, Price seems to have fallen under Father Roman’s spell. With a hint of awe, Price delcares: “He can ring bells infinitely.” Despite the sad state of the Lowell bells, followers of Father Roman remain true — and the Society of Russian Bell ringers plan to bring him back to campus once the belltower renovations are complete.

The bell ringers remain patient, awaiting the day they can return to their perch in Lowell. Until then, they are content with their humble practice set and the memory of their former glory.

We ask Ding: “Do you ever wander through the yard and hear the bells marking every hour, and get filled with deep sadness and envy?”

A previous version of this article incorrectly indicated that the Lowell House "Mother Earth" bell weighs 800 pounds. In fact, the bell weighs 13 tons.