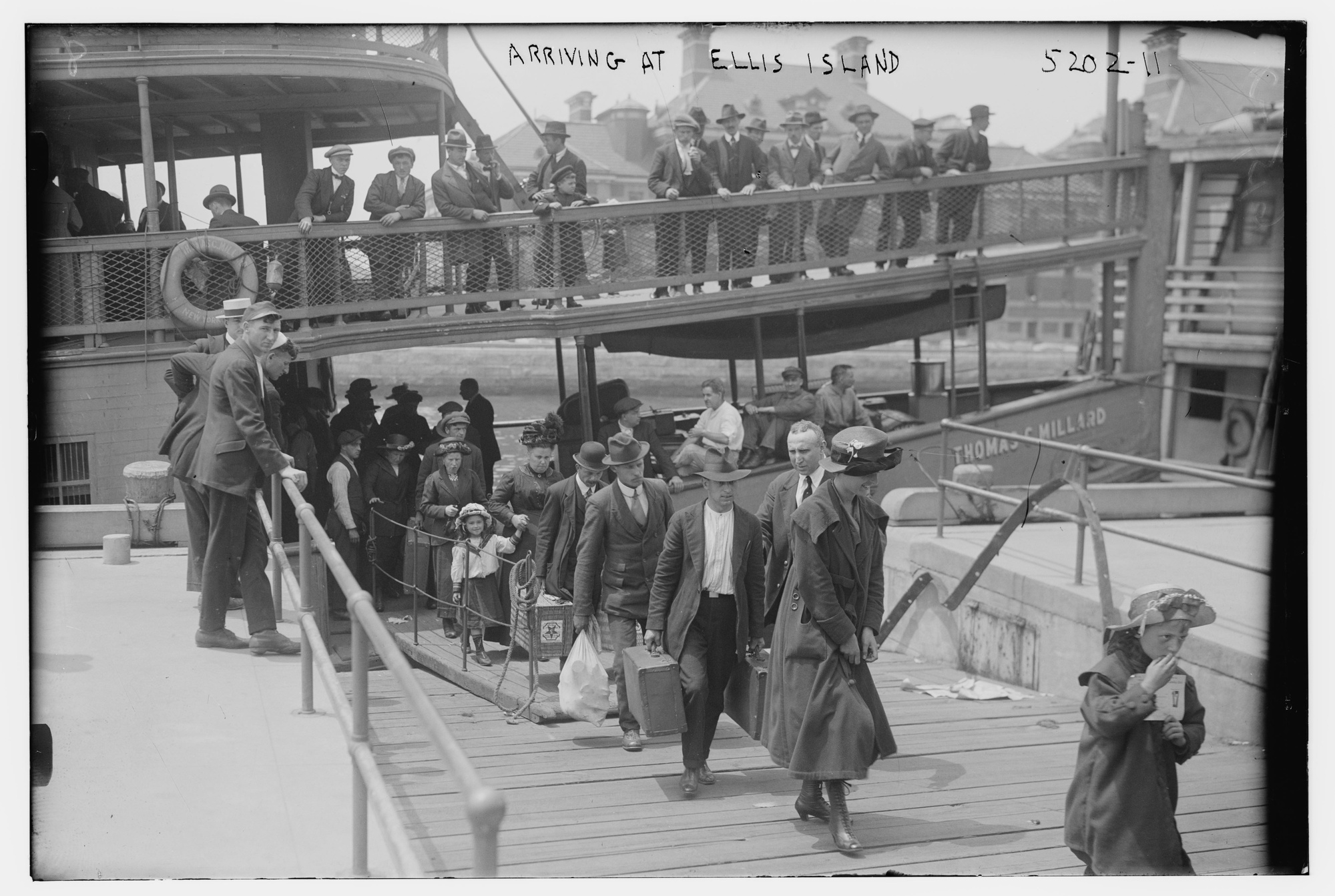 The Harvard Alumni Who Fought to Keep Immigrants Out

In the tradition of their Harvard educations, the League’s executives embarked on a faux-intellectual mission to build a scientific and logical basis for nativism.
By Matteo N. Wong

In April and December of 1895, two Harvard alumni — Prescott F. Hall ’89, a prominent lawyer, and Doctor Robert D. Ward ’89, a founder of American climatology — travelled to New York City to conduct research. Their subject: the caliber of immigrants. Unsurprisingly, their findings were xenophobic. The process for immigrant screening at Ellis Island “was radically defective and ineffective to keep out a large class of undesirable immigrants.”

Joined by Charles Warren, class of 1889, these three former Harvard classmates established the Immigration Restriction League on May 31, 1894 in Hall’s Boston law office. The aim of the organization was “exclusion of elements undesirable” from the country. Though less than a dozen core members executed the group’s operations, they amassed hundreds of paying members and played a critical role in the passage of the Immigration Act of 1917, which forced immigrants to pass a literacy test.

In the tradition of their Harvard educations, the League’s executives embarked on a faux-intellectual mission to build a scientific and logical basis for nativism. Until the League dissolved in 1921, they circulated flyers containing federal immigration statistics to hundreds of newspapers and every member of Congress in an effort to prove that an exponential rise in Eastern and Southern European immigrants had caused an “enormous increase in the number of criminals” and “the unemployed.” Yet they implored the public to “study these figures and draw your own conclusions,” claiming in an early publication that data was “essential to the intelligent consideration of this subject.”

Every letter the League circulated ended with: “The league advocates a stricter regulation of immigration, but not the exclusion of any immigrants whose character and standards fit them to become citizens.” In particular, the League was outraged by the way Ellis Island officials determined immigrant literacy. “The official figures as to literacy are not based upon actual tests,” they warned members in 1895, but relied upon immigrants truthfully disclosing whether or not they could read.

Hall and Ward brought flyers in several languages to Ellis Island, forcing over 1,000 immigrants to demonstrate their literacy. Not enough Italians were present during their first two trips, so, to maintain scientific integrity, they returned in 1896 and examined 3,174 Italians to obtain legitimate results.

To them, the evidence was incontrovertible: Upwards of 36 percent of Russians, Croats, Hungarians, Syrians, and Galicians were illiterate and a tenth of Italians lied about being able to read, according to their analysis. More importantly, the League traced an apparent relationship between immigrants from these countries and slums, finding “a very close connection between illiteracy and general undesirability.”

Hall, who served as the League’s executive secretary, was born in 1868 to a wealthy Boston family. He did not outwardly embody the image of an impassioned activist. He was a sickly child, his mother prevented him from playing with other children his age. He became a feeble and insomniac adult. Somewhat depressed, he found solace in spending hours observing flowers and insects in his garden, where he could not watch even a struggling worm without wanting to help it. “He never could bear to see anything suffer,” his wife wrote. This excluded Southern Italians, of course.

Hall’s infirmity reflected Northeastern elites’ insecurities at the turn of the 20th century. Nine million immigrants arrived between 1900 and 1910, nearly tripling the rate seen in the previous decade. Nativist sentiment rippled throughout the country with this sharp increase in Southern Italian and Eastern European immigrants.

“Boston Brahmins,” upper-class Bostonians, were, like Hall, especially troubled by what the League eventually labeled “racial suicide on the part of earlier settlers and their descendants.” They feared that “undesirable” immigrants would, through high birth-rates, eliminate the Anglo-Saxon, Brahmin class altogether.

The Immigration Restriction League was composed of these wealthy elites. Ward’s mother was a Saltonstall, a family line that descended from a London mayor, helped to found Massachusetts, and had attended Harvard since 1659. The Warrens, another prominent Boston family, had attended Harvard since 1759. And Hall had prepared for Harvard at Boston’s premier Nobles School, an all-boys feeder school that later became Noble and Greenough.

Beneath this aristocratic, intellectual facade lay deep racial anxieties. As of their first publication, the League’s rhetoric suggested the literacy test was just a politically expedient way to prevent immigration “of those who are without question the most illiterate and the most depraved people of that continent.” They stressed that English and Scandinavian immigrants — “of the most intelligent and of the most desirable races of Europe” — would pass the test with ease.

After its conception, the League mobilized an intense campaign to implement stricter immigration legislation, including a literacy test. They worked with dozens of labor unions, including the American Federation of Labor, and printed 140,200 flyers within four years. Their main advocate in Congress was Henry Cabot Lodge, a Massachusetts Senator from 1893 to 1924, with whom they exchanged sometimes daily letters over two decades.

Lodge regularly used the League’s statistics in congressional debates and took their suggestions when drafting legislation such as the Lodge-Corliss Bill. On Dec. 24, 1896, he wrote them, “I consider it one of the most vitally important measures which has been before Congress in my time.”

The bill passed both chambers, but was vetoed by President Grover Cleveland on March 3, 1897. The League was not discouraged and drafted nearly identical legislation to be considered by the next Congress. The League faced resistance from other sources. Chief among them were railroad and steamship companies who desired cheap labor. During another failed push to pass legislation, Lodge sent an urgent telegram on Jan. 7 1898, stating that “German steamship Companies making great effort against bill. Anything you can do should be done at once.”

Large sections of the public agreed. The League collected hundreds of editorials and columns from newspapers including the Los Angeles Times and Washington Post in support of such restrictions on the illiterate immigrants.
After decreased activity following the Spanish-American war, the League’s xenophobia became increasingly transparent in the first decade of the 20th century.

On Feb 1., the League published a bright-pink booklet titled “What of the Future?” It likened Russian and Southern European immigrants to the “barbarians” who overran the Roman Empire; accused Jewish administrators of placing “a black, obliterating mark drawn across the name of Christ or any reference thereto”; and said the aforementioned nationalities “contribute nothing to this country.”

Eugenics also came into play: Seeing as the “cruel and unusual punishment” clause of the Eighth Amendment would prevent actual eugenics, Hall wrote in 1908 that immigration could substitute in “eugenic results by selecting the better classes of aliens for the fathers and mothers of future citizens.”

Ultimately, the League’s idea of a literacy test was implemented by Congress. President Woodrow Wilson vetoed the bill twice, in 1915 and 1917, but — riding a wave of isolationist sentiment at the outbreak of World War I — his second veto was overridden on Feb. 5. Hall proudly logged the victory in the League’s record book in red ink. The act also established an “Asiatic Barred Zone” in line with the League’s belief that “orientals” were “still farther removed from the civilization of Northern Europe and America.”

The League was not done — in April of 1918, they proposed a Numerical Limitation Bill to set a quota on the number of Southern and Eastern Europeans immigrants. Any semblance of intelligent argument had vanished, with the League writing, “the effect of the reading test will presently diminish; partly through the natural spreading of education to the countries backward in that respect, partly because those same countries will make special efforts to promote elementary education.” Their racism against certain immigrants, regardless of education status, was fully unveiled.

The League disbanded in 1921, due partially to Hall’s death and partially to exhausted political capital — even Lodge saw no need to pursue further legislation. But Hall and his colleagues had helped spearhead a mass nativist movement — evidenced by versions of their literacy test passing Congress on four separate occasions.

Although their logic was widely accepted at the time, some people did see through the League’s intellectual facade. Joseph H. Senner, who had originally invited the League to Ellis Island to implement their literacy test, had a change of heart in 1898, and chose to start the rival Immigration Protective League.

In a letter circulated to German-American communities, Senner wrote, “The nativistic authors of such entirely superfluous new laws pretend that their only object is to protect the American laboring man against foreign competition. This is, however, only a poor excuse for their real scheme, dictated by that hatred of the foreigner.”