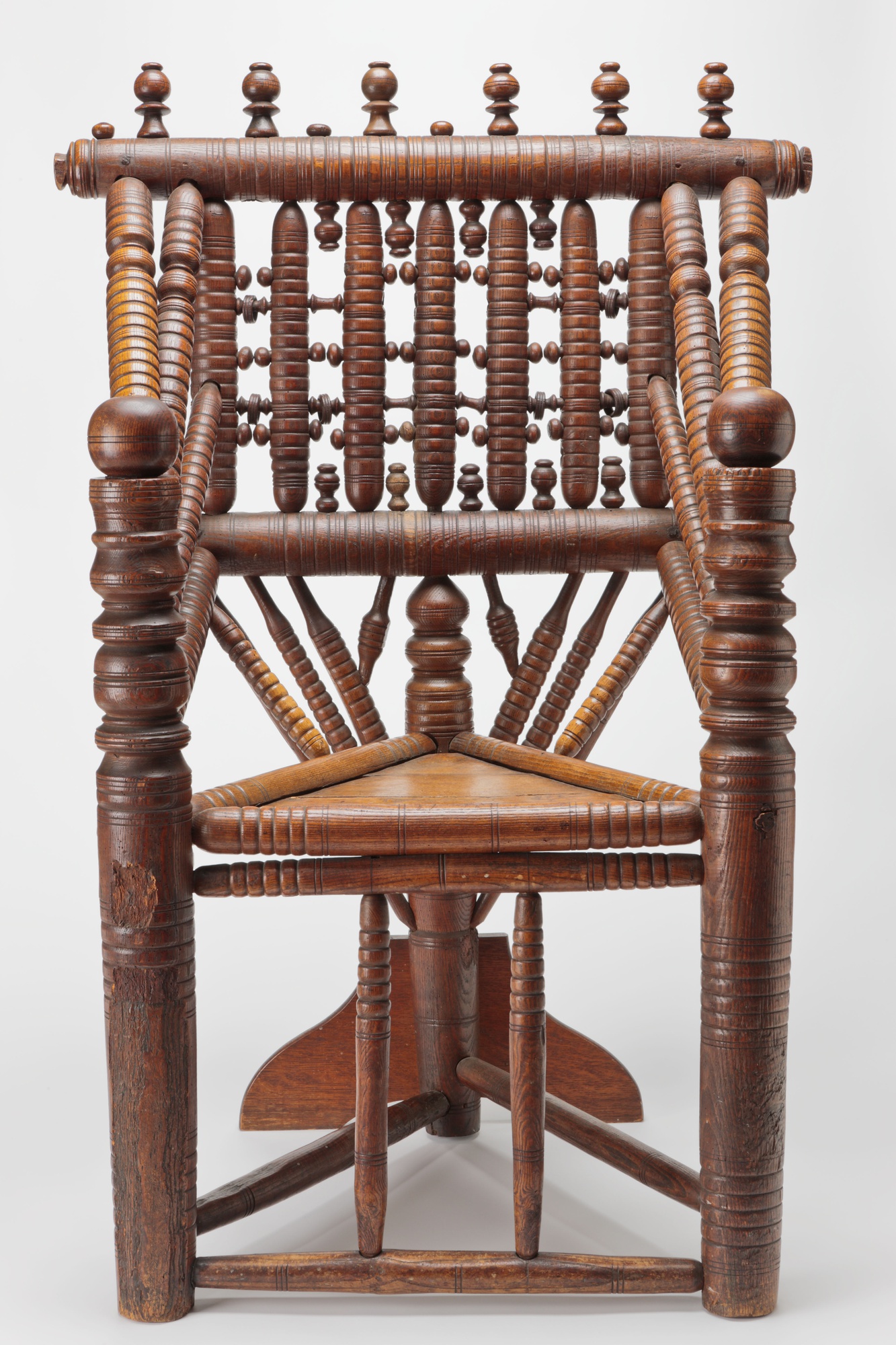 When The President Took A Seat

Though the chair’s course through Harvard’s history is vacuous at best, its role in Harvard’s presidential tradition is iconic today.
By Benjamin D. Senzer

During his 20 year presidency of Harvard College, things did not always sit well with Derek C. Bok.

“It was just uncomfortable… I don’t know how to describe it,” Bok says. “I’d have to think for a while before I could put it into words.” Bok is describing the Holyoke Chair, an approximately 450-year-old relic that has been a symbol of Harvard’s presidency since the 18th century. Aside from its much-needed cushion that Bok’s own mother embroidered for him during his time as president, the chair is one of the only artifacts stored in the Fogg Museum that periodically leaves the museum to be put to use.

As Bok and other presidents of Harvard College have noted (rather unfondly), the chair is famously uncomfortable and prone to tipping over, owing to its ribbed wooden dowels and its bizarre 3-legged construction. To this day, the chair’s unconventional design creates a rather harrowing sitting experience for the university president during long, drawn-out ceremonies, from Inaugurations to Commencements. Indeed, were it not for the addition of a stabilizing fin at the back of the chair in recent decades, the chair may have contributed to quite a spectacle. One 1992 letter from Ivan Gaskell, Professor of Cultural History at the Bard Graduate Center, imagines the worst: “I am sure that our present president is a delicate sitter, but one never knows what calamity might occur if the chair were ever used without the stabilizing ‘fin’.” 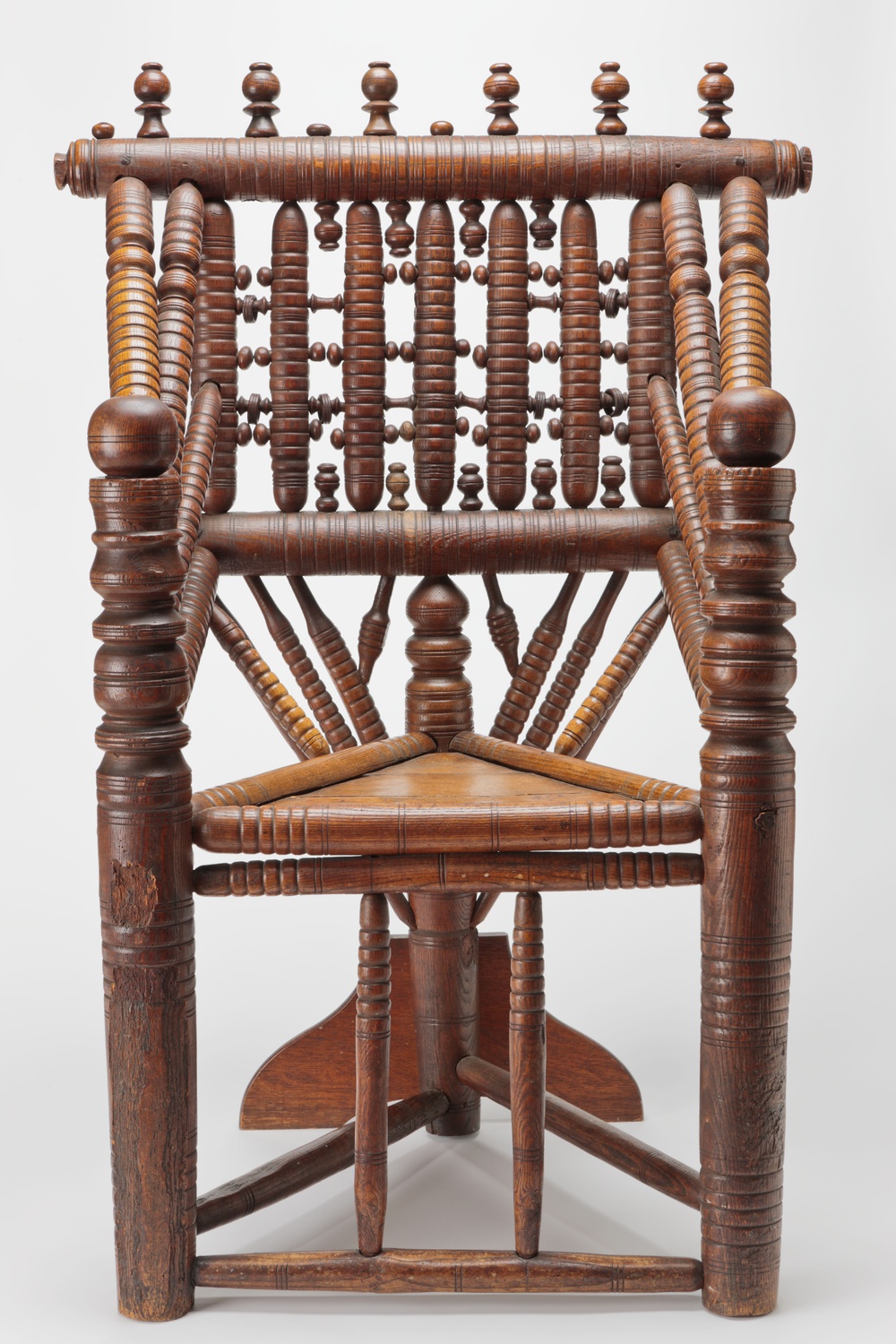 The Holyoke Chair, a symbol of Harvard's presidency since the 18th century. By Courtesy of Harvard Art Museums/Fogg Museum, © President and Fellows of Harvard College

The origins of the chair and how it made its way to Harvard are hazy. The chair is estimated to have been lathe-turned sometime in the 1500s and is constructed of European Ash, leading to speculation that the chair is English or Welsh in origin.

Despite contemporary critiques of its sitting quality, chairs of similar construction to the Holyoke Chair were all the rage in their heyday. “In the 17th century world, there aren’t many options. It’s not like there’s a couch you can choose,” explains Ethan Lasser, Curator of American Art at Harvard Art Museums. “This is actually the most comfortable chair in the orbit of British furniture circa 1660.”

Even as this style of chair grew out of style in the mid- to late-1700s, its then-La-Z-Boy caliber of comfort (to use Lasser’s comparison) was coveted by Europe’s wealthiest. Antiquarian Horace Walpole, 4th Earl of Orford, describes in a fervent 1775 letter to the Countess of Ossory that he “crammed [his] cloister with three cart-loads of lumbering chairs from Mr. Bateman’s, and at last [is] surfeited with the immovable movables of our forefathers.”

Across the pond, Harvard’s presidency had its own little obsession with European patriarchy, developing the habit of appropriating Medieval English artifacts as its own. Increase Mather was one of the first presidents to take on this trend, bringing a London-constructed telescope back to Harvard in 1692 after a four-year excursion to England. One theory suggests that the Mather family was entrenched through marriage in a dense web of wealthy English dignitaries, including Massachusetts Governor Thomas Pownall, a personal friend of chair-enthusiast Walpole.

However it ended up at Harvard, the Holyoke Chair is so named because it captured the eye of president and avid anglophile Edward Holyoke in the early 1700s. Holyoke saw ownership of the chair as an opportunity to legitimize Harvard’s name against a crop of time-honored English institutions like Oxford and Cambridge. At the time, he may have considered even the act of “sitting” proper to be uniquely aristocratic. “There wasn’t much seating furniture around, particularly in rural England,” Lasser says. “It was probably made for the patriarch of a family; he would have been in this chair, and everyone else would have been in stools or benches.” It is speculated that the modern-day administrative position of “chair”—say, for instance, the Chair of Fifteen Minutes Magazine—is derived from this tradition.

The chair became somewhat of a pet project for Holyoke, as evidenced by its pommels—the only feature of the chair other than the stabilizing fin to be composed of wood that is non-native to the European continent—which were turned out of American oak by Holyoke himself. Holyoke insisted on becoming the first in a long line of Harvard presidents to have an oil portrait painted of him while sitting in the chair.

The connection between Holyoke’s usage of the chair and the chair’s role in the present day is not well documented. Several sources suggest the chair may have landed in students’ hands sometime during the late 19th and early 20th centuries. It is then that the chair became the stuff of legend—a subject of mystery, jest, and at times, poetry.

When the chair was housed in Harvard Hall in the 1800s, for example, it is said to have been used for unsavory purposes: it granted male sitters the right to kiss any woman he was showing around the college. Timothy Bigelow (class of 1886) delivered an 1811 poetic oration to Phi Beta Kappa that tells it exactly as it was: “Now young gallants allure their favorite fair to take a seat in Presidential chair; Then seize the long accustomed fee, the bliss of the half ravished, half free-granted kiss.”

Oliver Wendell Holmes Jr. (class of 1861), who would later go on to become an Associate Justice of the United States Supreme Court, took interest in the chair’s cryptic origins during his undergraduate years at Harvard, crafting an elaborate creation myth in which one student—the mononymous “Smith”—would pass the chair from generation to generation for all eternity. “These are the terms, as we are told saide Smith said chaire to have and holde,” Holmes wrote. “When he doth graduate, then to passe to ye oldest youth in ye Senior Classe… and soe forever.” Smith was never heard from again.

Though the chair’s course through Harvard’s history is vacuous at best, its role in Harvard’s presidential tradition is iconic today. In addition to being used in public ceremonies, the Holyoke Chair has become a symbolic gesture of the presidency’s rich past.

As it turns out, Derek C. Bok, after enduring 20 years in the chair, was not actually shown sitting in the chair in his Holyoke-style oil portrait. “The reason was because I painted Derek Bok after he had stepped down as president,” says Jason Bouldin ’89, the artist who immortalized Bok on canvas. Instead, the chair is shown in the background—an inert, triangular decoration—while Bok is seen blissfully lounging in a cushy, four-legged wooden seat. “It was sort of a way to show that the chair and the robes… are sort of these emblems of state. I just thought it would be a nice way to say that he stepped aside for the next president.”

Laurel T. Ulrich has emphasized the chair’s significance in more recent years. Ulrich, the professor of a general education course that features a study of the Holyoke Chair, remembers curating a 2011 exhibit featuring the chair. “One of the devices we used—which was a lot of fun—was to misplace things.” Ulrich took the rare opportunity to place the chair in the Schlesinger Library next to the portrait of current President Drew G. Faust, along with a pair of embroidered slippers that once belonged to a former male president of Radcliffe College. “It was just a little comment on the transformation of the possibility of a woman [becoming president]. We were making a historical observation.”

When Faust leaves her historic 10-year tenure as the first woman president of Harvard College in June 2018, all eyes will be on Lawrence S. Bacow as he takes his first seat in the presidential chair.