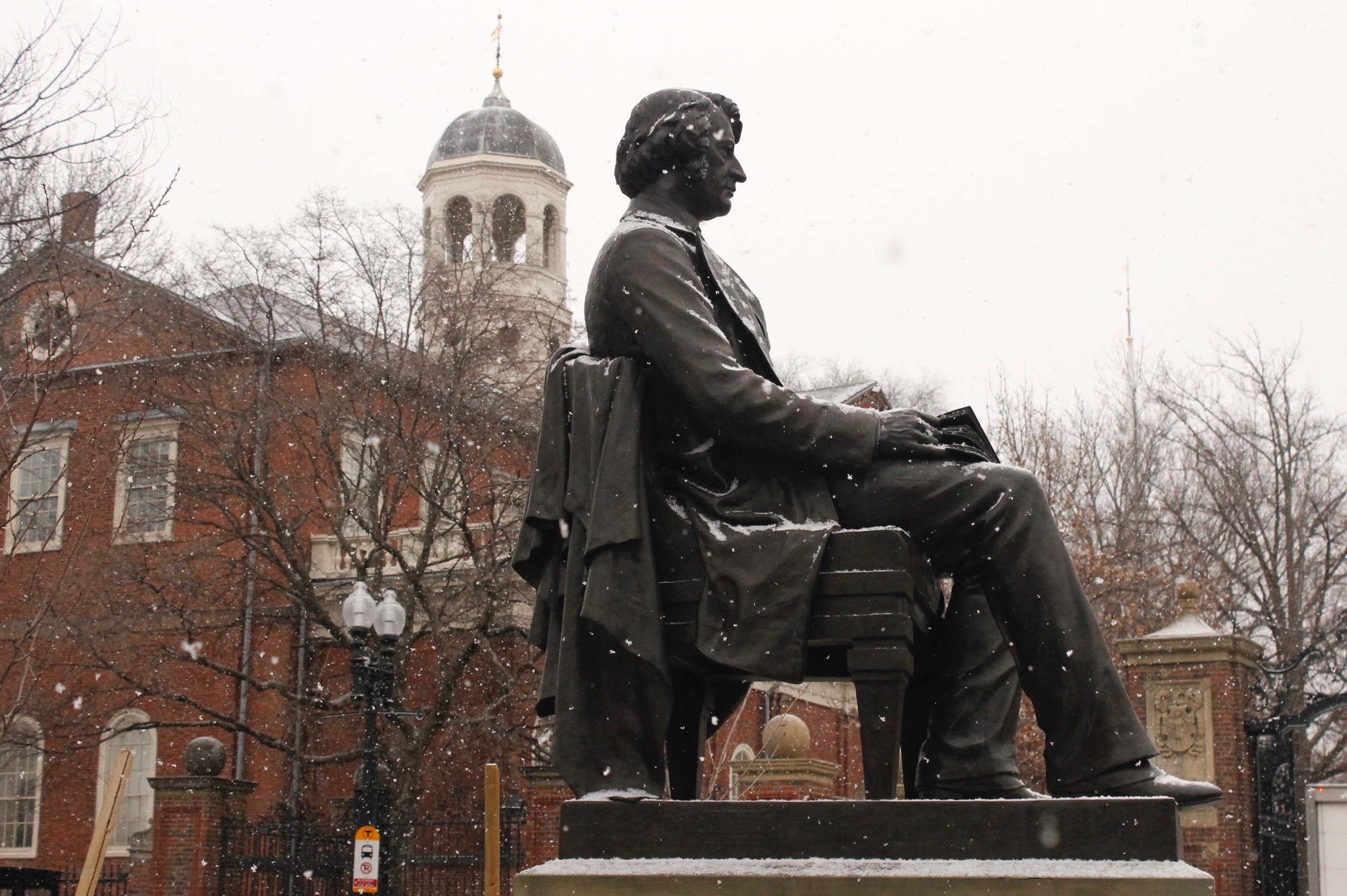 The Charles Sumner statue sits on an island right across the street from Johnston Gate, gazing over locals, students, and visitors alike.
Advertisement
Advertisement

A Tale of Two Statues

"Someone tipped off Committee members about what they considered a scandalous secret: It had been designed by a woman."
By Walter N. Paiva

Charles Sumner was one of Harvard’s favorite sons. He graduated in 1830 and seemed destined for greatness from an early age. Sumner’s classmate Rev. Dr. Samuel M. Emery recalled him as one who “never studied, as many young men do, for college honors, but for love of study and for cultivating his mind.” An ardent abolitionist, he would go on to represent Massachusetts in the United States Senate, leading the legislative fight against slavery during and in the wake of the Civil War.

When Sumner eventually passed away from a heart attack in 1874, the entire city of Boston entered a state of mourning. In his eulogy, Sumner was memorialized as “a ripe scholar, a profound statesman, an honest, earnest defender in the darkest hour, as well as at mid-day of freedom, justice and right.”

After his death, the Boston Art Committee looked to commemorate Sumner with a statue in his likeness, to be placed prominently in the recently constructed and now burgeoning Boston Public Garden. Towards this end, the Committee solicited designs for the statue from the greater community. They received countless submissions, including some from prominent architects of the day, before eventually settling on one which had been entered anonymously. The winner was a regal, seated version of Sumner, holding an open book in one hand and staring resolutely into the distance. Observers said it captured the great statesman’s thoughtful disposition.

Plans went forward on the statue, until someone tipped off Committee members about what they considered a scandalous secret: It had been designed by a woman.

Hysteria ensued. Outraged, the Committee deemed it obscene for a woman to model a man’s legs, and instead elected to construct its second-choice design, that of sculptor Thomas Ball.

While Sumner’s life story may have entailed a continual push for equality, the story of his memorial in many respects forms the opposite. The Ball statue and its upright, imposing portrait of Sumner—a far different depiction than the one first selected—has now stood in the Public Garden for over a century.

For Anne Whitney, the true originator of the neglected design, this likely did not come as a surprise. Born in Watertown, Mass., she was an enterprising female sculptor during an era when many deemed her craft appropriate for men alone. As a result, she had long faced discrimination.

An activist for much of her life, Whitney turned to sculpture during her 30s, seeing it as an ideal conduit for political dialogue. Her earlier works, most famously an 1869 statue of a Roman woman begging and an 1873 statue of Haitian revolutionary Toussaint L’Ouverture, stood out as unique because of the powerful positions in which she depicted her subjects. According to historian Elizabeth Rogers Payne, “most of her sculpture portrayed either champions of freedom or those oppressed by the lack of it.”

Writing to her brother and sister from Rome in 1875, shortly after learning of the snub of her statue of Sumner, Whitney wrote that she remained hopeful. “Bury your grievance, my dear Sarah and Edward,” she wrote. “It will take more than a Boston Committee to quench me.”

In the aftermath, she made sure to recover the original version of her Sumner statue, with the hope that one day it would finally go on permanent display. This early version in fact became part of a temporary exhibition at the 1876 United States International Exposition in Philadelphia. Nonetheless, soon after, the plaster prototype returned to some forgotten corner of Whitney’s Beacon Hill home where it began to slowly crumble away.

Her Sumner design languished for almost three decades until 1902, when the project was resurrected thanks to an anonymous donor. After being cast in bronze at a Chicopee, Mass. foundry, the statue was unveiled at the intersection of Cambridge Street, Kirkland Street, and Massachusetts Avenue, just outside of Harvard Yard’s Johnston Gate. Though she died in 1915, Whitney lived to see the debut of one of her final and most meaningful pieces.