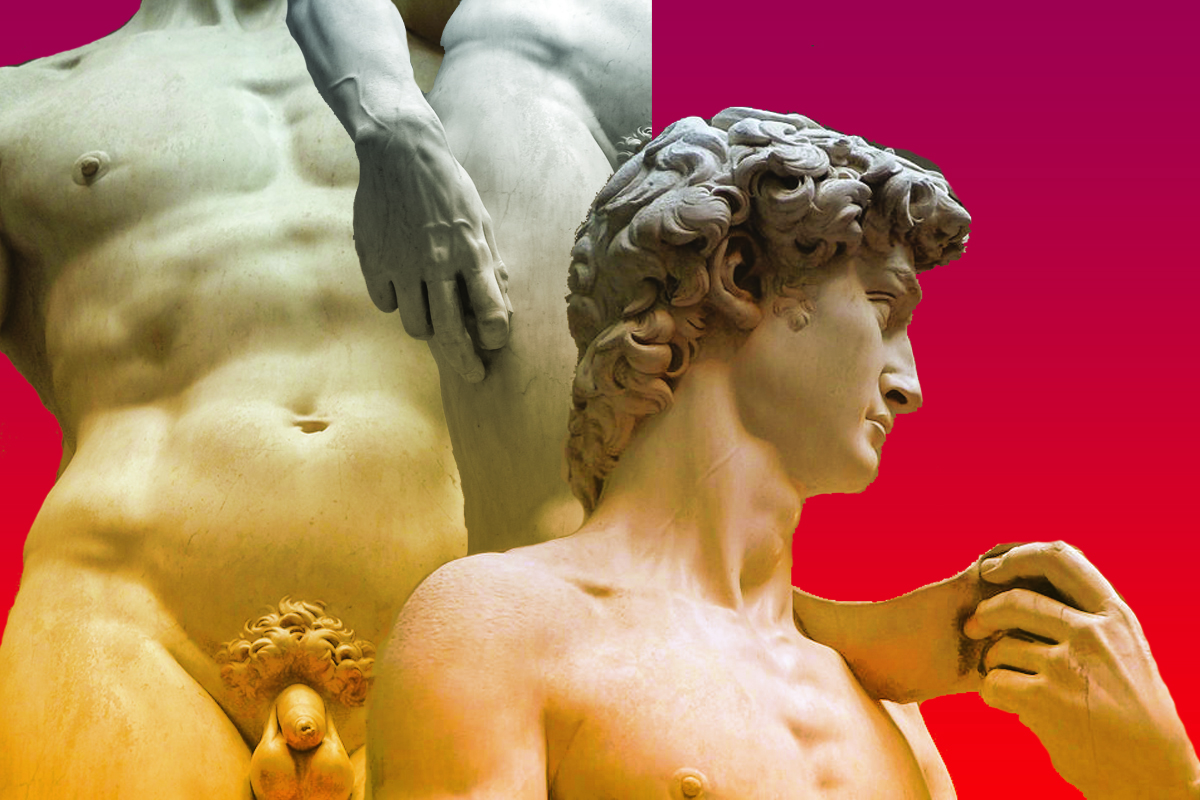 Naked in the Archives

Sargent believed precision was possible only when measuring students nude; the photographs likely served as an element of this extensive data collection, though he rarely referenced the pictures in his own writing.
By Clara J. Bates

A bronze, male statue stands on the fourth floor of the Peabody Museum, meticulously crafted for the 1893 World’s Columbian Exhibition in Chicago. Elevated on a pedestal, he gazes into the distance, his muscular arm tucked behind his back. Though the statue has received great attention, few are aware of the sources of data used to sculpt it: thousands of Harvard men, carefully measured—nude, for the sake of precision—and photographed.

The pink and beige data forms are in the Harvard Archives, available to any researcher. So are the thousands of naked photos, divided between 31 tightly-packed boxes.

The photos feature each man from behind, head-on, and in profile. In profile, the subject’s hand holds a vertical measuring stick outstretched. The three images are arranged side-by-side on a thick white note card, each of which is tucked into an envelope. Hundreds of envelopes line each box. The men gaze into the camera seriously, chins tilted up—for the most part, seemingly unconcerned with the prospect of a 19-year-old girl peering back at them 120 years later.

Paired with each photo is a notecard filled on the front and back with detailed measurements, handwritten in curly script. One side of the card lists sixty-five categories of measurement, including “strength of lungs” and “girth of ninth rib.” The other side offers basic information like the man’s father’s occupation and family medical history—one refers to death by train derailment, many more to death by consumption—along with the student’s name and his Harvard class year.

Taken between the 1880s and the 1910s, the trove of photos reflect one man’s fascination with precise measurement and data collection in pursuit of the perfect human form—Dudley Allen Sargent. Sargent, a physical fitness pioneer, served as director of Harvard’s Hemenway gymnasium from 1879 to 1919.

As a child, Sargent was drawn to gymnastics and worked in a circus. Sargent directed the gymnasium at Bowdoin College and went on to attend Yale Medical School, where he crafted a system of physical education guidelines, measurements, and apparatuses that quickly became well-known in schools across New England. But Sargent’s proposal to enact formalized physical education at universities—in which students could receive academic credit for regular attendance—were met with resistance. At Yale, President Noah T. Porter asserted he considered teaching physical education unworthy of a college-educated man. Sargent took matters into his own hands and opened his own independent gymnasium in New York.

In 1879, after Sargent shut down his New York gymnasium, he was recruited by President Charles W. Eliot to lead Harvard’s Department of Physical Training and Development at the newly renovated Hemenway Gymnasium. Sargent became director of the gymnasium and assistant professor of physical training, fulfilling his desire that physical education be taken seriously.

Sargent hoped to expand the reach of physical fitness beyond athletes to the general student body, tapping into what he called “the creative and constructive effects of athletics in augmenting power and in moulding character and conduct.” Sargent viewed physical fitness as a crucial tenet in overall strength of character, presaging Teddy Roosevelt’s later promotion of the “strenuous life.” Sargent recommended specific exercises based on deficiencies in individual students’ measurements in order to gradually approach human perfection.

At Harvard, using the examination techniques and data collection pioneered in his New York gymnasium, Sargent measured thousands of students.

He used special tools, including a steel “girth measure,” to measure and chart students’ bodies. Based on the measurements, Sargent would tell each student which muscles needed to be bulked up and would provide individualized exercise programs along with suggestions regarding diet, sleep, and clothing. Sargent believed precision was possible only when measuring students nude; the photographs likely served as an element of this extensive data collection, though he rarely referenced the pictures in his own writing.

Despite the growing crowds of students attending Sargent’s examinations, he remained unpopular with the Board of Overseers as well as with his colleagues on the faculty.

In 1885, Sargent served on the committee that banned football at Harvard for a season, citing safety concerns. Deaths on the football field were common at the time. Football was unregulated, unpadded, and unruly, and—in Sargent’s view—damaging to the power of human character. His personalized approach to health and beauty provided the superior alternative, he thought. But the move to ban football was extremely unpopular.

When his appointment came up for renewal in 1889, the Overseers stripped Sargent of his professor title, but let him remain as director of Hemenway Gymnasium.

Perhaps because of his troubles with Harvard’s faculty, Sargent held greater sway outside campus. Sargent led a public campaign to spread his gospel beyond Hemenway Gymnasium. A media craze ensued: in 1890, Sargent held a competition for the most perfectly symmetrical body, based on detailed measurement categories he designed. Sargent viewed the physical ideal not just as symmetry of one’s features but as proportional symmetry. For instance, Sargent commented that the female winner in his 1890 competition was in both the 82.5th percentile for height and 82.5 percentile for weight. Sargent was both a master of self-promotion and a man with a singular mission—spreading the gospel of physical education.

Sargent also wrote prolifically and gave interviews to newspapers across the country. He commissioned the two Peabody statues (one of which is female) using the average measurements gleaned from his research and from data sent in by researchers at other schools. Sargent believed the statues would serve as a clear benchmark for the progress of humankind over the years, and onlookers at the time compared themselves to the mean-measurement of the “Typical American” as displayed in the figures.

Yale, Wellesley, Vassar, and other schools required students to be photographed nude in the 20th century. At a time when subjects of those photos were still alive, the universities in many cases destroyed the photos or donated them to the Smithsonian. The surviving photos are closed to all researchers until 2050. Harvard, by contrast, makes its nude photos of students available for any researcher to view, though researchers are required to “disassociate the names of the subjects” when writing about the photographs.

Sargent expanded his reach beyond Harvard, founding the Sargent School of Physical Training—now the Sargent College of Health and Rehabilitation Sciences at Boston University. Upon his death in 1924, the New York Times referred to him as “America’s pre-eminent leader in the field of physical education.”

Few experts deny Sargent’s impact on physical culture. Fewer are aware of the thousands of nude Harvard men it took to get there.