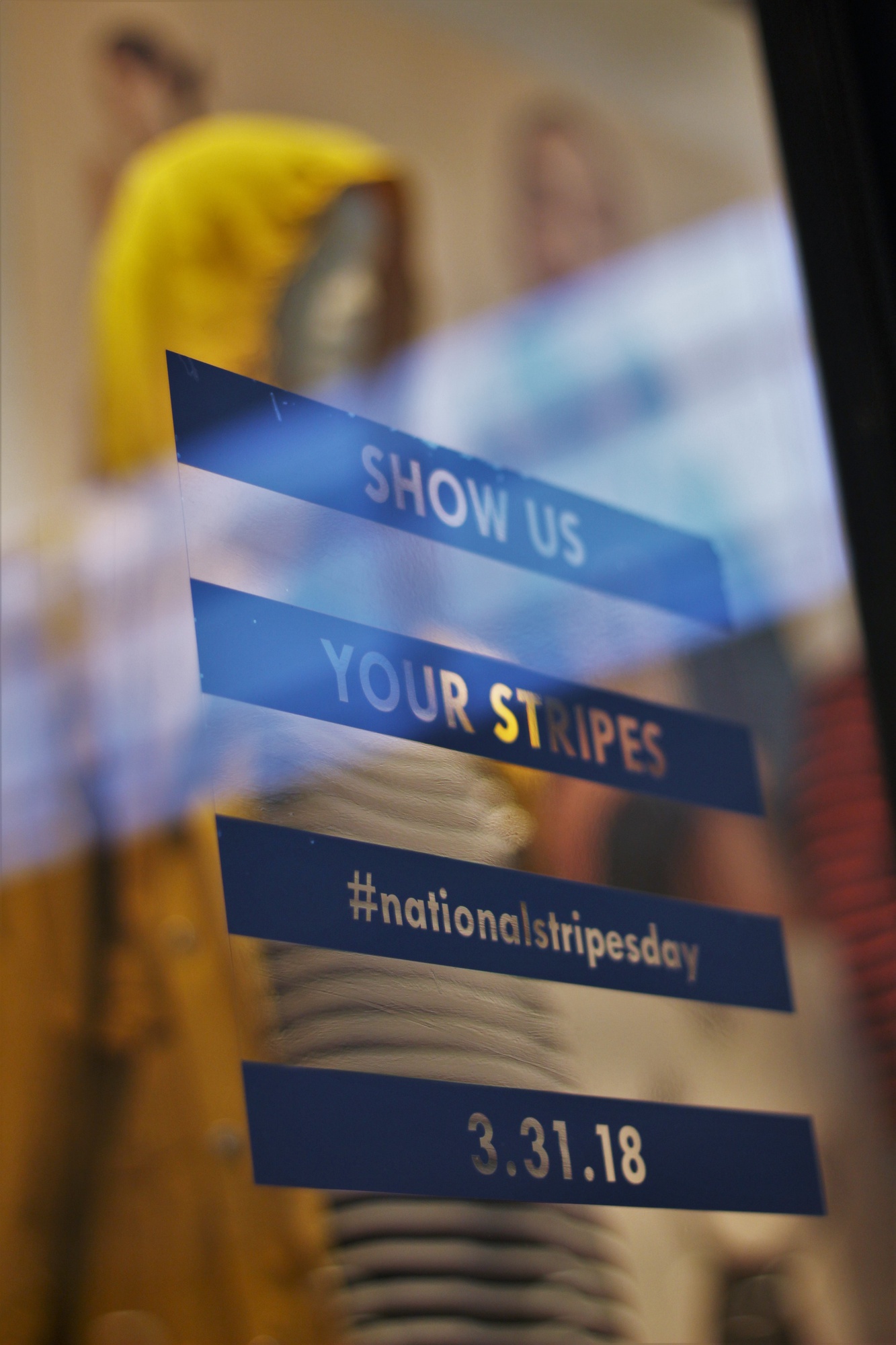 I was Duped by National Stripes Day and Now Resent J.Crew and Its False Advertising

However cheekily the company conceded that the holiday was “100% made-up” in parentheticals, J.Crew promised me an absolutely hedonistic abundance of striped goods—not only apparel but also, according to their website, “drinks, snacks and other fun striped surprises.”
By Jensen E. Davis

For the week leading up to the holiday, J.Crew celebrated the second annual National Stripes Day on Instagram by posting a different “limited-edition” striped item each day. Their captions reassured that “only x days” were left until the holiday, like the company needed a countdown to temper stripe-lovers’ zeal. However cheekily the company conceded that the holiday was “100% made-up” in parentheticals, J.Crew promised me an absolutely hedonistic abundance of striped goods—not only apparel but also, according to their website, “drinks, snacks and other fun striped surprises.”

But, when I arrived at Copley Place (a mall in Back Bay that, because of the tasteful gray marble floors and high ceilings, felt like an heiress’s luxury bathroom) and took the escalator up three floors to a J.Crew sandwiched between a Vineyard Vines and a Neiman Marcus, I could barely discern there was a national holiday celebrated behind the store’s glass double doors.

In the store’s window, 12 of the 13 mannequins wore some variant of a striped shirt. One wore an oversized navy t-shirt with thin white stripes, another wore a rugby-style shirt with thick pale pink and blue stripes, and yet another wore a long-sleeve with horizontal white and neon orange stripes. But stripes are probably the most common clothing pattern and each mannequin only wore one striped item. So the display didn’t look like the visual result of a post-Stripe Day bacchanal orgy like I had anticipated; it looked like a modest East Coast couple’s summer picnic party. The only hint of the holiday was a very small black chalkboard that read “Let’s Party!! Come celebrate with stripey surprises inside…” The sign was almos hidden under an even larger, brighter sign that read “Spring is in full bloom! 40% off your purchase!”

As I entered the store, a saleswoman wearing a white and ultramarine blue striped t-shirt greeted me with an enthusiastic “welcome to J.Crew!”—not even a simple “happy holidays.” And, while all the salespeople wore striped shirts, most shoppers did not, thus either ignoring or never even seeing J.Crew’s stipulation on the company Instagram story to “#wearstripes.” These people were shopping because of proximity to J.Crew, not their devotion to stripes.

The only celebratory surprise was hidden by a mannequin. Behind her torso was a metal basin filled with ten cans of La Croix and a cookie platter. Neither the La Croix nor the cookies were striped. A family of four women entered the store and the family tween exclaimed, “Fuck! They don’t have a bathroom. I’m trying Victoria’s Secret.” The tween’s younger sister, the only stripe-wearer in the family, noticed the cookie platter in her peripheral view and immediately ran to it. She used her palm to high-five every cookie. Her mother noticed, and dragged her from of the store.

However disinterested the Copley Place J.Crew seemed to be towards National Stripes Day, the CambridgeSide Galleria J.Crew’s disregard for their own holiday managed to surpass the Copley Place J.Crew’s scrooge-esque apathy. Of the five employees at this J.Crew, only two wore stripes. One employee even wore a different pattern: gingham. The store façade didn’t even reference the holiday.

It took me about ten minutes to locate the ‘stripey’ refreshments, which, again, were not striped. Another metal basin with half-melted ice and four La Croix and a platter of somewhat smashed donut holes held court at a table in the back corner of the store. Raspberry jam spilled out of one donut like blood gushing around an un-stitched gash.

The J.Crew factory store in Somerville did not even pretend to celebrate the company’s own holiday. Assembly Row, which overlooks the West bank of Mystic River, is a few blocks of East Somerville streets settled by an alarmingly large number of factory stores. It felt like a more overtly consumerist Disneyland. The stores were barely decorated, only one or two disheveled mannequins. And storespeople don’t bother restacking piles of sweatshirts because the name of the factory game is swift and purposeful shopping, not leisure or luxury. You go to a factory store for a fantastic deal, not to languidly browse through neat racks of beige cardigans on a whim. Accordingly, the J.Crew Factory Store didn’t bother decorating the store with half-hidden signs that explained, “When in doubt, STRIPES.”

But, while the J.Crew factory store was devoid of stale, mini-pastries, about three times the amount of people in the other two J.Crew’s combined populated this store. A line of impatient shoppers stretched from the register in the back of the store, snaking through disordered racks of mostly striped shirts and dresses. It felt like shopping during the week before Christmas—everyone was there for the explicit purpose of finding cheap sweaters as quickly as possible, a task that requires shoving, quick-walking, and eye-rolling at dawdlers. A 30-year-old woman pushed me with her shoulder because I was a roadblock in her route to the “Teddie Sweater” table, which offered a basic pullover in red, royal purple, navy, navy with a white embroidered pineapple, and navy with a hot pink embroidered flamingo for 60 percent off. Everyone in the store unwittingly celebrated the holiday with fervor by purchasing as many clothes, most of which happened to be striped, as quickly and aggressively as possible.

I walked out a few steps behind a mother-daughter duo each carrying a shopping bag in either arm. The mother, who was wearing a solid, cream-colored shirt, exclaimed, “We bought so much stuff!” and high-fived her teenage daughter. They had a happy National Stripes Day.