Students who voted “Yes” to unionization were two-and-a-half times more likely to disapprove of how Harvard handles issues of discrimination and sexual harassment than were students who voted “No,” according to an exit poll.
By Shera S. Avi-Yonah, Molly C. McCafferty, Brian P. Yu, and Phelan Yu 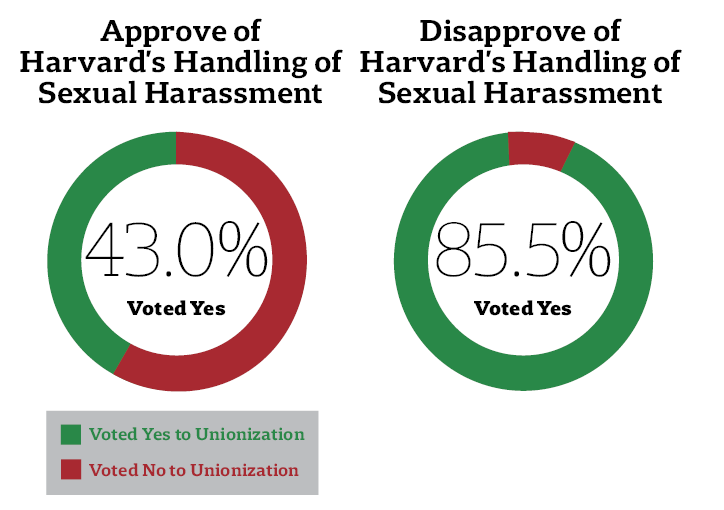 Students who voted “Yes” to unionization were two-and-a-half times more likely to disapprove of how Harvard handles issues of discrimination and sexual harassment than were students who voted “No,” according to an exit poll conducted by The Crimson.

Of all respondents to The Crimson’s survey, students studying at the Harvard Kennedy School, Harvard College, and Harvard Law School were most likely to indicate they disapprove of the University’s handling of discrimination and sexual harassment. Each school saw over 60 percent of affiliated respondents indicate disapproval, respectively.

Overall, female respondents were roughly 20 percent more likely to report disapproval than were male respondents. A majority—53.5 percent—of women respondents indicated they disapprove of Harvard’s procedures for dealing with discrimination and sexual harassment. By comparison, 41.6 percent of male voters and 40 percent of gender-nonconforming voters did the same.

The Crimson’s survey also asked voters to give their opinions of individual administrators. A plurality of respondents indicated they approve of University President Drew G. Faust—48.6 percent. Reweighting responses by the official election vote count suggests that 50.5 percent of those who cast ballots in the election approve of Faust. Pro-union survey respondents were over six times more likely to disapprove of University Provost Alan M. Garber ’76 than were their anti-union counterparts.

Eligible student assistants cast ballots April 18 and 19 to determine whether Harvard Graduate Students Union-United Automobile Workers would earn the right to collectively bargain with the University on their behalf. The final result showed 1,931 votes in favor of unionization and 1,523 against—a tally certified by the National Labor Relations Board Monday.

The Crimson conducted an exit poll on both days of the election, stationing reporters at the three polling locations in Cambridge, Longwood, and Allston for 78 percent of all hours the sites remained open. Reporters collected surveys from 1,295 voters, representing over a third of the total voting population.

The 23-question survey asked respondents for their opinions on collective bargaining, politics, and campus issues. Unless otherwise noted, the data presented in this story has not been corrected for any possible response bias (see below for methodology).

In the weeks up to the election, some union organizers argued establishing a union in Cambridge would help students advocate for better protections against sexual harassment.

Concerns over sexual misconduct recently spiked on campus—in March, the Chronicle of Higher Education reported that at least 18 women are accusing Government Professor Jorge I. Dominguez of repeated acts of sexual harassment over a 30-year period. Though administrators first sanctioned Dominguez for sexual misconduct in the early ’80s, he later rose through Harvard’s administrative ranks.

Following the Chronicle’s reporting, graduate students circulated a series of open letters expressing disappointment with how Harvard dealt with Dominguez across the decades.

Dominguez announced his retirement in March. The University has launched a Title IX investigation into the matter and the Government department has formed a committee to examine the culture that allowed Dominguez’s behavior to persist unchallenged for more than 30 years.

The Dominguez case and the #MeToo movement more broadly figured prominently in HSGU-UAW’s pitch to voters. Our Harvard Can Do Better, a campus anti-sexual assault group, endorsed the union in March and participated in organizing efforts in the weeks leading up to the election. The union also held events about the work of unions in combating sexual harassment.

Of survey respondents affiliated with the Graduate School of Arts and Sciences, Humanities and Social Sciences students were more likely to report disapproval of the University’s handling of sexual harassment and discrimination than were their counterparts in the Sciences.

Just 13.9 percent of survey respondents reported an unfavorable view of Faust. Around 49 percent indicated they view her favorably, while 37.5 percent said they have no opinion of the president.

Opponents of unionization were more likely to report approval of Faust than were supporters: 60 percent of survey respondents who voted “No” indicated they approve of the president, while 43.2 percent of “Yes” voters did the same.

Faust last gave an opinion on the issue of unionization in Sept. 2015, marking her only public remarks on the issue to date. At that time, Faust said she disapproved of the effort to unionize, arguing a union would change the nature of the “mentoring relationship” between graduate students and faculty.

She called the change “not appropriate.”

Asked for their views on Garber, a majority of respondents to The Crimson’s exit poll reported they have no opinion of the administrator—61.9 percent of pro-union voters and 61.6 percent of anti-union voters did so.

Garber has played an active role in providing information about unionization since Harvard’s first unionization election in 2016. At the time, he wrote an email to students defending the University’s appeal to the National Labor Relations Board.

In the run-up to both elections, Garber sent emails highlighting resources Harvard provides for graduate students absent a bargaining unit.

During both elections, union organizers have criticized Garber’s communications to students, arguing his missives misrepresent graduate students’ ability to advocate for policy changes.

The data presented in this story is entirely sourced from the exit poll of eligible voters The Crimson conducted during the two days of the April 2018 unionization election.

Crimson analysis of the raw exit poll data indicated voters in favor of unionization were more likely to fill out the survey than were voters who voted against unionization. Specifically, The Crimson calculated an oversampling factor of 1.32 for respondents who reported voting “yes.” The Crimson’s survey specifically asked students whether they voted in the Nov. 2016 election and, if so, whether they had changed their mind on unionization since the first vote.

Using the responses to these questions, The Crimson calculated the 32 percent oversampling by taking the percentage of respondents who reported they voted yes in both the April 2018 and Nov. 2016 elections (out of all respondents who voted in the Nov. 2016 election and indicated they did not change their minds in the interim), then dividing it by the actual percentage of voters who voted in favor of unionization in Nov. 2016. The Crimson utilized this response bias factor, in addition to a geographic correction that reweighted the data by polling site, to infer that approximately 50.6 percent of eligible voters who cast ballots April 18 and 19 voted in favor of unionization.

The official vote count Friday revealed that roughly 56 percent of those who cast ballots voted in favor in unionization, leading to an overall oversampling factor of 1.23. Unless otherwise indicated, the data reported in this story is the raw data from the survey and has not been corrected for this apparent response bias.