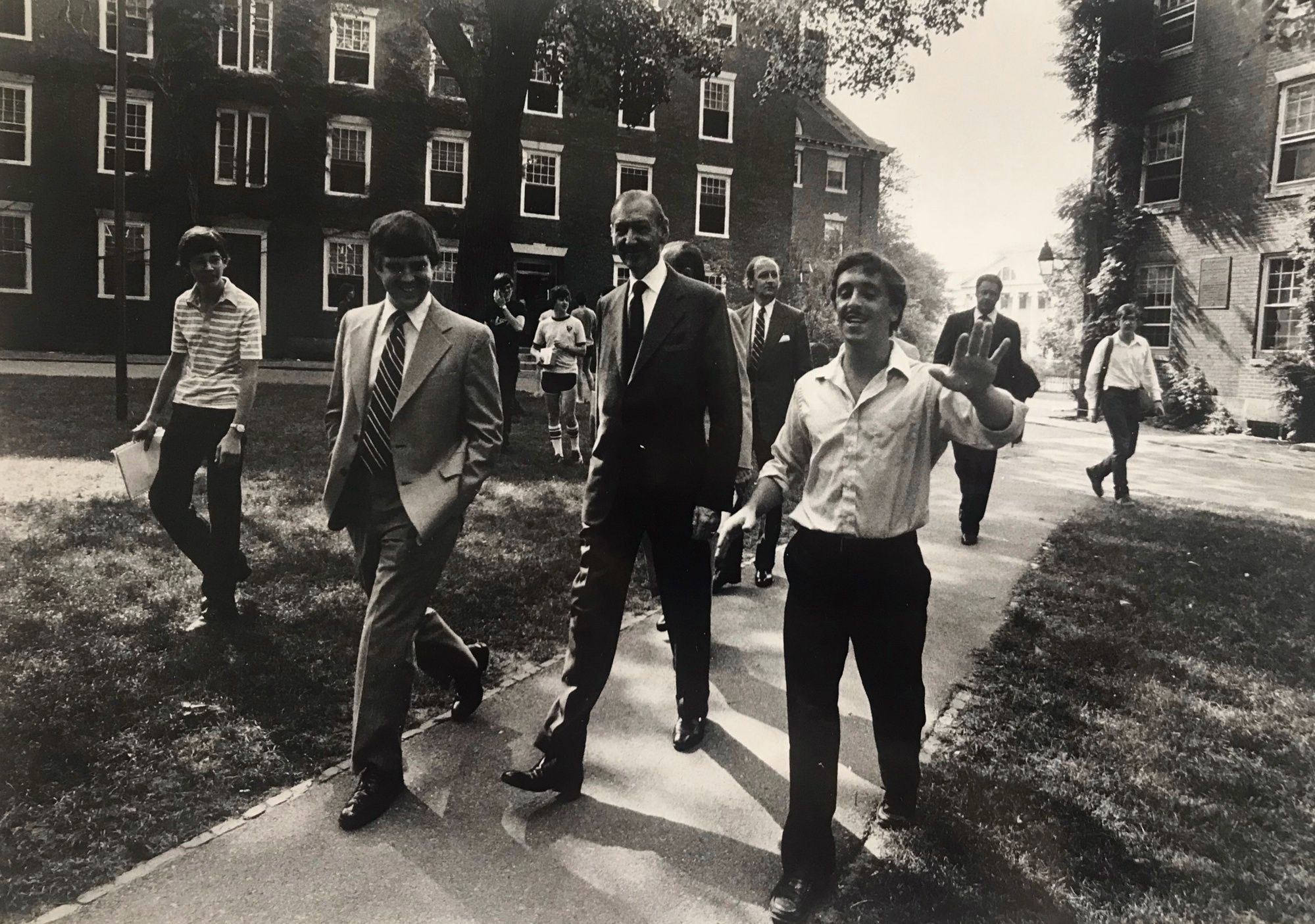 A Dragapella Star With a Law Degree

“I was just on my own and I was not going to be stopped,” he remembers. “It was scary but most people were” — he pauses, choosing his words carefully — “polite.”
By Clara J. Bates

“I just want people to know that if they participate in the Primal Scream they might end up a singing drag queen,” Benjamin H. Schatz ’81 declares.

For the uninitiated: Primal Scream is the semesterly tradition in which undergraduates sprint through Harvard Yard, totally nude, the night before finals period. Schatz claims to have initiated an early version of the tradition when he and his friends would gather in Pennypacker for a cathartic, stress-relieving scream (with their clothes on). But for Schatz and his pals, Primal Scream was not exclusively held during finals period. It took place every night at 11 p.m.

Schatz, now a professional, full-time, singing drag queen, started his career in activism in 1977 at Harvard, when the famously homophobic “The Anita Bryant Story” catapulted gay rights into the national conversation.

“I couldn’t lie to myself anymore,” he says, having thought, “This is who I am, so I’m going to do something about it.”

So Schatz “burst the closet door open” for other students on campus. He presided over and dramatically expanded the Harvard-Radcliffe Gay Students Association and started Gay and Lesbian Awareness Day. Under his leadership, the HRGSA went from being small and unnoticed — Schatz was one of three freshmen in the group — to one of the largest groups on campus, Schatz says.

Some students were hostile toward the group.

According to classmate, CNN commentator, and New Yorker writer Jeffrey R. Toobin ‘82, Schatz faced unkind reactions when he handed out HRGSA fliers at class registration each January, usually alone. Students would, at times, throw the leaflets on the ground or hurl them back at Schatz.

“It’s hard to remember how courageous that was,” Toobin says.

More than once, when Schatz and members of the HRGSA were publicizing Lesbian Gay Awareness Day around campus dining halls, Schatz says onlookers threw food at them.

Nonetheless, Schatz is upbeat about his college experience.

“I was just on my own and I was not going to be stopped,” he remembers. “It was scary but most people were” — he pauses, choosing his words carefully — “polite.”

Schatz went on to Harvard Law School, followed by  a career stint in civil rights litigation. He served as an attorney for the National Gay Rights Advocates for a few years, and then spent time working as a Santa Claus in a department store in San Francisco before he was offered the opportunity to start a program for HIV-positive healthcare workers. The organization became the Gay and Lesbian Medical Association, which he headed as its executive director from 1990 to 1999. Schatz also served as a member of President Clinton’s Advisory Council on HIV/AIDS.

At the peak of the AIDS crisis, the work was crushing. “I had all of my friends dying,” he says. “It makes you think about what is important in your life. When you don’t know if you’re going to be alive, if the people you love are going to be alive.”

That’s also when Schatz discovered he could combine his twin loves for theater and activism. One night, Schatz and a few friends went to a Bette Midler concert dressed in drag and discovered that they sang well together. From there, the men decided to start a “dragapella” group called the Kinsey Sicks. The group’s name is a reference to the Kinsey Scale, a scale measuring sexuality first popularized in 1948 that has since largely been refuted; A six on the Kinsey Scale signaled same-sex attraction. The Kinsey Sicks write and sing satirical songs, make music videos, and travel worldwide to perform.

From 1993 to 1999, Schatz straddled two roles: executive director of the GLMA and Rachel, his alter ego when performing for the Kinsey Sicks. Eventually the bureaucratic elements of Schatz’s office job became too much. The direness of AIDS work had taken its toll. Schatz made the Kinsey Sicks his full-time job.

For Schatz, the change was liberating. He says he felt pressured to be “respectable” as the AIDS panic struck. Now, Schatz says, “I don’t want to have to be respectable.”

“It’s very tempting when you’re at Harvard to assume that there are really only four careers: business, law, medicine, or academia,” he says. Drag queen wasn’t on the list.

Why drag? “There was a defiance,” Schatz says. “That was lifesaving. And it gave me so much more joy.”

Schatz has been the lyricist for the Kinsey Sicks for 25 years. Their songs are mostly politically charged; a mix of originals and parodies (“What Does Fox News Say” is a recent example). He is on the last tour of his career as a dragapella performer, the schedule of which is still being finalized.

“Should someone be foolish enough to bring the Kinsey Sicks to Harvard, I wouldn’t object,” he adds.

From proctors to bureaucrats to classmates, Schatz has always chosen the unorthodox. As he steps off the stage for good, citing fatigue with the intense tour schedule, he plans to keep writing — and making people uncomfortable.

Perhaps he’ll return to the stage, Schatz says. “I have no doors closed, except joining the Trump administration. Actually, I would probably accept that.” He laughs. “I don’t think I’d last for long there. It would be an interesting day.”

A previous version of this article incorrectly stated that Benjamin H. Schatz ’81 and his friends used to gather in Pennypacker when they were Harvard undergraduates in the 1980s and collectively scream while nude. In fact, Schatz and his friends kept their clothes on for this ritual.