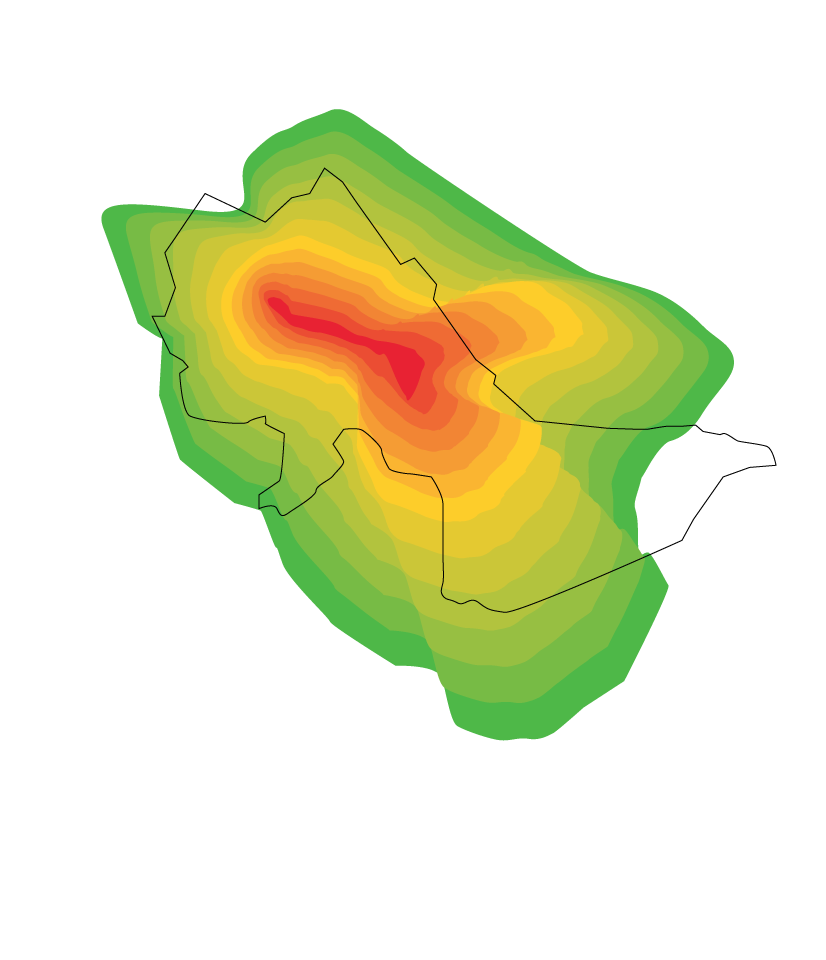 Eyes and Ears in Cambridge

While ShotSpotter is used nationally — in cities as large as New York and Chicago, but also as small as Somerville and Revere — its efficacy is still in question.
By Vivekae M. Kim

In front of an empty, overgrown lot, at an intersection a block away from Central Square’s Massachusetts Ave. hub, I crane my neck, looking for audio sensors that might be able to detect a gunshot.

In Cambridge, ShotSpotter, a gunshot detection technology, has been in use since 2014. On May 21, the sensors detected gunfire from the location where I’m standing and alerted police. When police arrived, they found five bullet holes in a building but no shell casings injuries.

Here’s how ShotSpotter works: Audio sensors are placed above street level — on the tops of buildings, maybe telephone poles — listening for what Sam Klepper ’87, senior vice president of Marketing and Product Strategy at ShotSpotter, describes as “loud, impulsive sounds.” If ShotSpotter employees deem the sound a gunshot, they alert the local police department.
To Cambridge police, ShotSpotter acts as “another tool in our toolbox,” says Jeremy H. Warnick, the Cambridge Police Department spokesperson.

Across the street, jumbled telephone wires hang low, and paint peels from a building. A woman in a bright red shirt pushes a shopping cart. The street is silent except for its metallic rattle. She stops in front of me. I stick out as some college-age kid with a notebook. She begins explaining that she needs to go get her laundry. Two days ago, she had open heart surgery. As she tells me this, she smiles sympathetically, as if I’m the one who had surgery.

"Here’s how ShotSpotter works: Audio sensors are placed above street level — on the tops of buildings, maybe telephone poles — listening for what Sam Klepper ’87, senior vice president of Marketing and Product Strategy at ShotSpotter, describes as 'loud, impulsive sounds.'" By Cat D. Hyeon

“You have a nice day,” she says, and the rattling begins again. I wonder if our conversation could be intelligibly recorded by ShotSpotter audio sensors.

ShotSpotter technology might not immediately inspire privacy concerns. After all, the sidewalk is public space — ShotSpotter’s sensors aren’t inside private homes or cars. But in 2018, as part of a growing national conversation surrounding police acquisitions of surveillance technology, Cambridge passed a first-of-its-kind ordinance in the Boston metropolitan area, requiring all surveillance technology to be reviewed by the city council for approval.

As a result, ShotSpotter’s future in Cambridge isn’t guaranteed. As debates about privacy and efficacy loom, a broader question remains: Does a technology like ShotSpotter belong in Cambridge at all?

Ears on the Street

There’s no guarantee that ShotSpotter’s sensors couldn’t pick up my conversation with the woman. It’s a concern that many privacy advocates share.

“Whether they are or are not used for that purpose [is] a legitimate question to ask,” says Chad A. Marlow, senior advocacy and policy counsel at the American Civil Liberty Union, regarding the ability of ShotSpotter to monitor street-level conversations. Marlow spearheaded the ACLU’s Community Control Over Police Surveillance campaign, which produced model legislation that inspired Cambridge’s surveillance ordinance.

A privacy audit conducted by New York University’s Policing Project concluded that “the risk of voice surveillance was extremely low in practice.” ShotSpotter has donated to the Policing Project since 2018, and ShotSpotter’s CEO, Ralph Clark, is on the organization’s advisory board. Still, the report allows that it’s possible that sensors will pick up and record “intelligible voice audio related to a gunfire incident.”

The city council guard of 2010 had expressed an interest in the technology. But, when ShotSpotter was finally installed in June 2014, the 2014 guard had no jurisdiction over its use — there wasn’t even a city council vote.

“But it was something that the council was notified of, in advance of it being activated in the public,” Warnick says.
ShotSpotter was acquired the same way many police technologies are acquired across the country — through Department of Homeland Security grants developed after 9/11, a product of increased Congressional “focus on state and local homeland security assistance,” according to a 2016 Congressional Research Service report.

The money for ShotSpotter comes from the Urban Area Security Initiative grant program, which is designed to help secure “high-threat, high-density urban areas” that might need to respond to acts of terrorism, according to DHS’s determination.

The Boston Office of Emergency Management distributes the funds — which, in 2019, totaled $16.9 million dollars. The only requirement is that UASI funds are used on items from the FEMA authorized equipment list, which includes gunshot detection technology as, “Network, Acoustic Sensor Triangulation,” but also air-purifying respirators and “explosive detecting canines.”

This process of funding local law enforcement through the federal government has spurred concerns among privacy advocates, because the outside funding allows municipal police departments to obtain new technologies without city council approval.

“We were caught in this cycle of effectively playing whack-a-mole, where technologies were obtained largely in the dark, behind closed doors without any public debate or democratic accountability,” said Kade Crockford, the director of the Technology for Liberty Program at the ACLU of Massachusetts.

While the text of the surveillance ordinance includes “gunshot detection and location hardware and services” within its definition of surveillance technology, the role of ShotSpotter specifically in Cambridge will be open to debate.

The surveillance ordinance went into effect on Sept. 10. By March, the city manager must submit a “Surveillance Use Policy” which proposes authorized uses, guidelines on data collection, and oversights for every department that “possesses or uses Surveillance Technology.” This means that Cambridge Police Department must release information on any other surveillance technologies in use, including ShotSpotter. Eventually, per the ordinance, the city manager will also have to submit an annual surveillance report to the Cambridge City Council, including an analysis of audits, costs, community responses, and the civil rights and liberty implications of a given technology’s use.

Last month, the Cambridge Police Department conducted routine tests of ShotSpotter. On Twitter, a video of the testing shows a dimly lit nighttime scene: Cambridge police officers shoot into a box propped on top of an orange truck.

The accompanying tweet from a Boston 25 reporter reads, “If you’re hearing gunshots right now in #Cambridge don’t be alarmed.”
Most Cambridge residents probably would be alarmed: Cambridge has relatively low rates of gun violence.

While ShotSpotter is used nationally — in cities as large as New York and Chicago, but also as small as Somerville and Revere — its efficacy is still in question.

ShotSpotter promises “a service level of at least detecting 90 percent of all outdoor gunfire,” According to Klepper. For shootings within its Cambridge coverage area, it has a detection rate of around 83 percent — 5 shootings out of 6 total detected.

But out of 22 ShotSpotter activation alerts in Cambridge thus far this year, only four have corresponded with actual confirmed shooting events. This gives ShotSpotter a false positive rate of about 82 percent.

Anything from a car engine backfiring to snowplows driving over manhole covers to even the noise of a bicycle tire popping can contribute to false positive activations.

In Fall River, the prevalence of these false positives led to an overextension of officer resources. Besides, shooting incidents that were later confirmed often had accompanying 911 calls from Fall River residents. So, in 2018, the Fall River police department shuttered its ShotSpotter program.

Even with the presence of false positives, Warnick sees ShotSpotter activations as just another call for service — similar to any 911 call. He hasn’t found ShotSpotter to create an additional strain on officer resources.

To that end, Crockford, the ACLU representative, suggests that the CCOPS-dictated approval process provides a critical avenue for evaluating a given technology’s efficacy.

Claims and metrics of the effectiveness of surveillance technology can be “cherry-picked by people who have a lot to gain, even financially, from the spread of these tools,” says Crockford. That’s another reason why the ACLU’s CCOPS ordinances are necessary: “What we need is a fuller picture, the complete picture actually, of how law enforcement is using these technologies,” she says.

Farhang Heydari ’07, the executive director of the Policing Project, says that using federal grant money to obtain policing technology isn’t inherently bad. Often, he says, departments have budgetary constraints that can hamstring attempts to acquire technologies that might improve policing. He pointed to an example: After the shooting of Michael Brown, an unarmed black teenager in Ferguson, Mo., the Department of Justice issued grants so that local law enforcement could invest in body cameras.

Cambridge is one of 13 jurisdictions in the nation that has passed a CCOPS surveillance ordinance that allows for elected bodies to dictate what kinds of police technologies exist in a community.

For now, ShotSpotter technology exists in Cambridge. Soon, it’s presence will be debated. Whether or not it remains in Cambridge is up to the people.