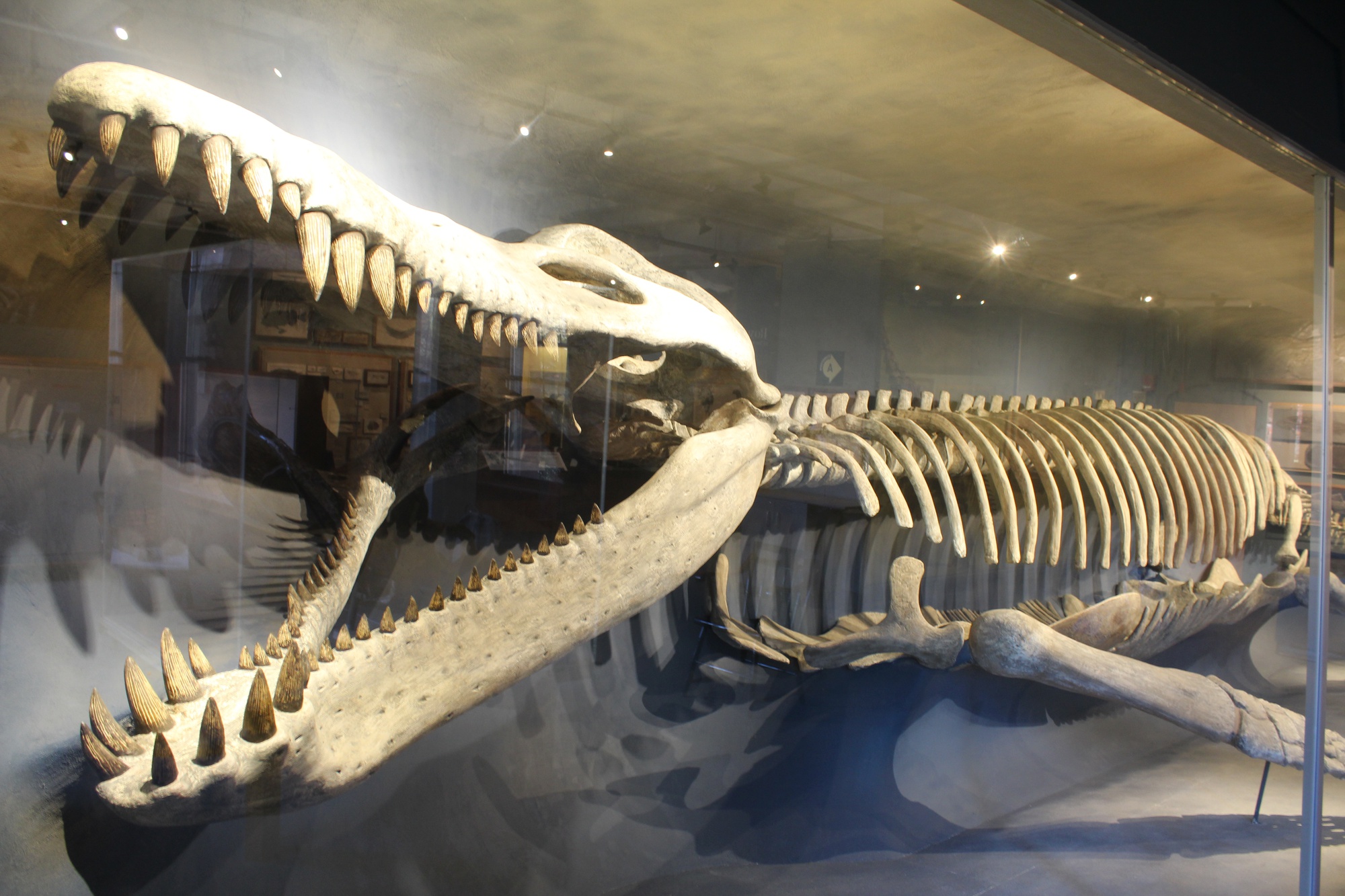 The Kronosaurus, K. queenslandicus, at Harvard University's Museum of Comparative Zoology, discovered in the 1930s, may have been reconstructed with too many vertebrae.
Advertisement
Advertisement

Almost 30 years after discovering a fossil in Australia, the Harvard Museum of Comparative Zoology displayed the largest Kronosaurus skeleton ever to be mounted.
By Claire B. Fridkin and Simon J. Levien

The jaws of the Kronosaurus skeleton — each of them longer than a human is tall — hang agape in a menacing bite, practically taunting any visitor who dares to approach its glass case in the Harvard Museum of Natural History. With a skeleton as long as the room that houses it, the marine reptile’s incredible size and stature contribute to its seemingly ominous character, but the discrete structures mounting the fossil to the wall are also key: The fossil, thought to be the most complete Kronosaurus skeleton mounted anywhere in the world, appears to be floating, as if it were a fresh catch off the coast of Australia — a 100-million-year-old live specimen, still paddling.

In 1931, the Harvard Museum of Comparative Zoology sent a six-person team to Australia to study native wildlife and obtain fossil specimens. Although the expedition yielded hundreds of mammals, amphibians, and insect specimens, their most notable discovery — the fossil of a Kronosaurus — was a complete accident. Graduate student William E. Schevill, class of 1927 decided to stay in Australia while the rest of the expedition team headed stateside. While touring archaeological areas in Queensland, Schevill met Australian rancher R. W. H. Thomas, who directed him to an unusual discovery in a field on his property. There, embedded in outcroppings of exposed limestone nodules, a few fossilized somethings jutted out. When unearthed, they would constitute the most complete skeleton of a Kronosaurus ever discovered.

The task of freeing the skeleton from its sedimentary case was arduous. The nodules, weighing more than four tons, were dynamited from the ground and shipped back to Harvard for preparation. Some Australian naturalists were none too happy with the undertaking, which one paleontologist referred to as “Yankee paleo-imperialism.” Even after the painstaking excavation process, a lack of money, manpower, and museum space caused long delays back at the Museum of Contemporary Zoology. It took eight years of meticulous preparations for the fossil to be exhibited — and even then, only the mounted skull debuted at first.

Despite the slow progress, the Kronosaurus was a hit. Media outlets kept frequent tabs on the restoration effort, so much so that MCZ curators assembled a scrapbook of Kronosaurus newspaper headlines.

A decade later, when the restoration process came to a standstill, MCZ Director Alfred S. Romer joked with philanthropist and sea serpent enthusiast Godfrey L. Cabot, class of 1882 over restoration costs. Romer vainly suggested that the Kronosaurus might cost “Oh, about $10,000.” To Romer’s surprise, a check signed by Cabot would appear shortly thereafter on his desk. The rest of the bones, which had remained encased in limestone, were then delicately excavated to reveal the full skeleton. 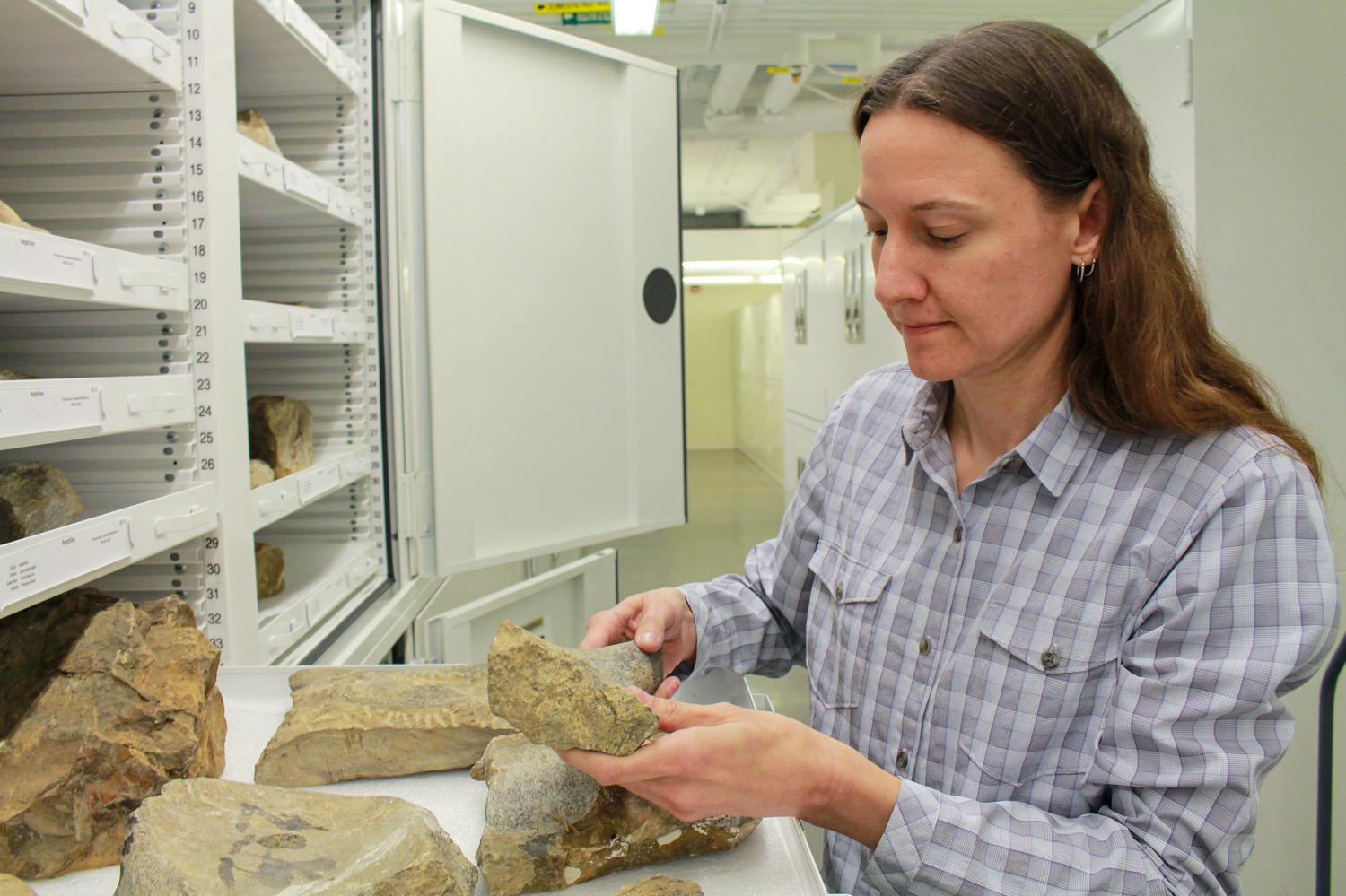 Since February 2001, Jessica Cundiff has worked as a Curatorial Associate in the Verterbrae Paleontology at the Museum of Comparative Zoology, working on projects including a collection renovation, a website redesign, and the digitization of collections data. By Ryan N. Gajarawala

Almost 30 years after its discovery, the fully mounted skeleton was finally unveiled on June 10, 1958. The mounting technology used by preparators Arnold D. Lewis and James A. Jensen was revolutionary in comparison to other skeletal mounts. Because it was designed to have no visible supports, the Kronosaurus appeared to be hovering in space.

This novel engineering feat comes with an unusual corollary: “We don't have a good record of how many bones in the mount are real,” Curatorial Associate Jessica D. Cundiff says. Because the skeleton of the Kronosaurus is not entirely complete, some of the missing bones were cast out of plaster to create the complete skeleton. And, since the entirety of the Kronosaurus was painted over to keep up physical appearances, “you can’t really tell what’s bone and what’s plaster,” Cundiff says. This ambiguity spurred rumors that Lewis and Jensen may have accidentally added extra vertebrae, which would imply that the museum’s current reconstruction is too long. This confusion has resulted in the fossil’s affectionate nickname: the “plasterosaurus.”

“We probably won't really ever know exactly unless we took it off of exhibit,” Cundiff adds, “but that would never happen because it’s such an important specimen, and it’s so big.”