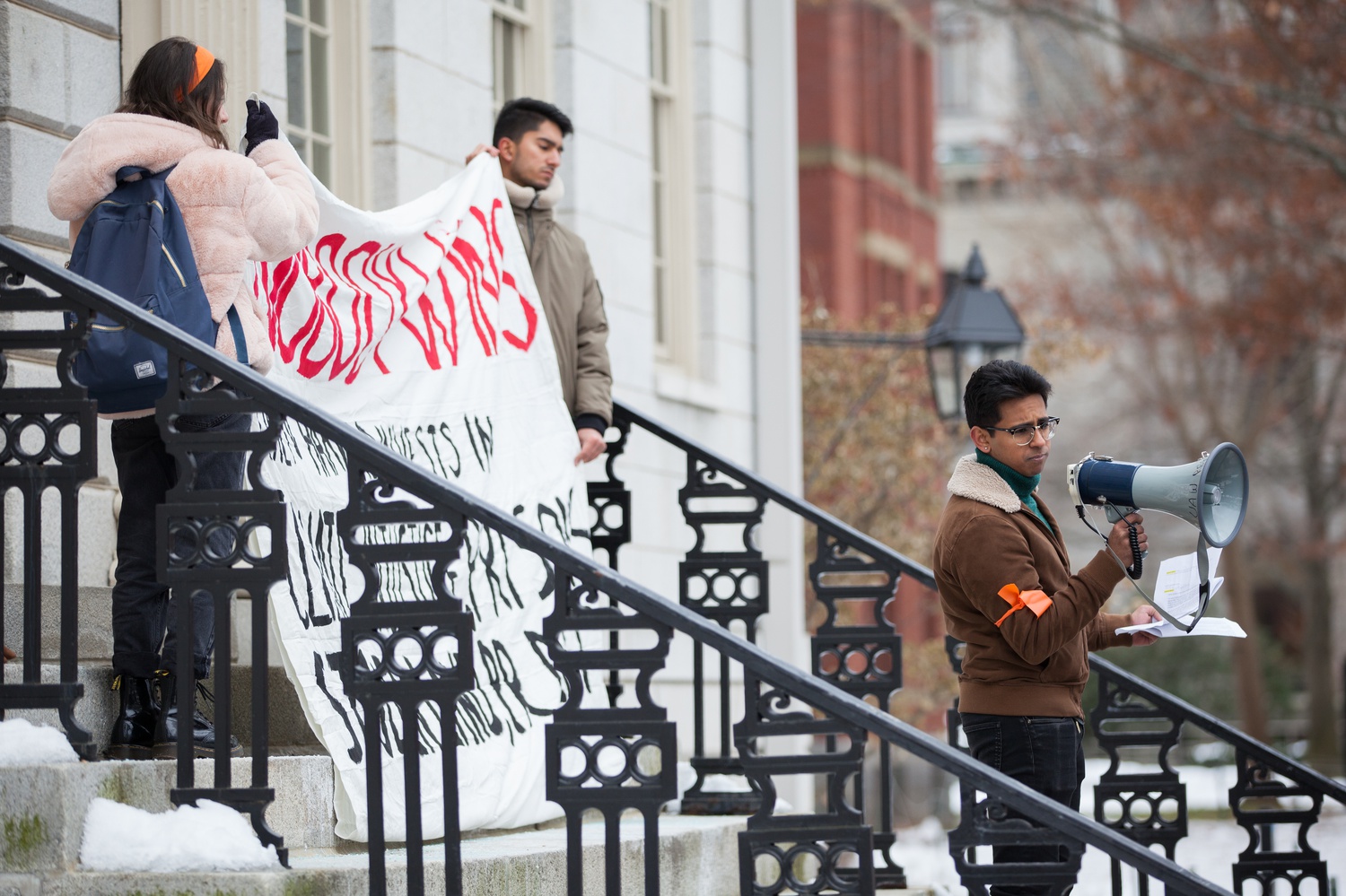 Divest Harvard — a student organization calling for the University to sell its investments in the fossil fuel industry — hosted a rally to push for fossil fuel divestment in coordination with picketers from Harvard’s graduate student union.

Harvard Graduate Student Union-United Automobile Workers began its strike Tuesday after months of negotiations between the union and the University. Throughout the week, strikers invited various campus activist groups to join them on the picket line.

Organizers connected the fossil fuel divestment and labor movements at the rally, urging administrators to divest from the fossil fuel industry and negotiate a fair contract.

"When Harvard makes superficial claims to support climate and workers' rights and then acts in ways that directly goes against those interests, our university needs to know that we will not be complicit,” Divest Harvard organizer Maya H. Levine ’21 said to those congregated at the rally.

Levine reiterated Divest Harvard’s demands that the University disclose its holdings and divest its endowment from fossil fuel companies by Earth Day 2020.

University spokesperson Jason A. Newton wrote in an email that while the University and divestment activists both agree on the “urgency” of climate change, they disagree on the methods of combating the phenomenon.

“Universities like Harvard have a crucial role to play in tackling climate change and Harvard is fully committed to leadership in this area through research, education, community engagement, dramatically reducing its own carbon footprint, and using our campus as a test bed for piloting and proving solutions,” Newton wrote.

The rally came two weeks after hundreds of divestment protesters stormed the field during halftime at the Harvard-Yale football game. On Friday, just before the rally, a Connecticut judge gave ten of the arrested Harvard affiliates five hours of community service.

At the same time Divest Harvard was rallying in the Yard, activists across the country were leading marches to demand action from government leaders to solve the issue of climate change.

“Today, while world leaders gather at the United Nations’ annual climate conference, we are gathered on this campus to demand that Harvard disclose, divest, and reinvest by Earth Day 2020,” Levine said.

Other activist groups on campus also attended the rally Friday. Members of the Harvard Prison Divestment Campaign — a group calling for Harvard to divest its endowment from companies tied to the prison industry — and the Ethnic Studies Coalition — a group of students protesting Romance Languages and Literatures associate professor Lorgia García Peña’s tenure denial — spoke at the rally to advocate for their respective causes and lend their support to the graduate student union.

“We have stood with the strike and the strike has stood with us for the past five days,” Rosa L. Vazquez ’20, a member of the Ethnic Studies Coalition, said in a speech at the rally. “We stand in complete solidarity.”

Ethnic studies advocates occupied University Hall for 48 minutes Monday to protest Harvard’s decision to deny García Peña’s tenure and call for the creation of an Ethnic Studies department. In addition, a protestor stood silently inside the Faculty of Arts and Sciences meeting Tuesday while dozens of students demonstrated outside in protest.

“HPDC stands with the Harvard graduate students union and your fight for a fair contract and for justice and respect for all workers and all people,” Zoe L. Hopkins ’22, an HPDC member, said at the rally.

“We are calling for jobs, not jails,” Hopkins added. “We believe in an abolitionist future in which fair pay, affordable healthcare, and protection from discrimination and sexual harassment are foundational.”