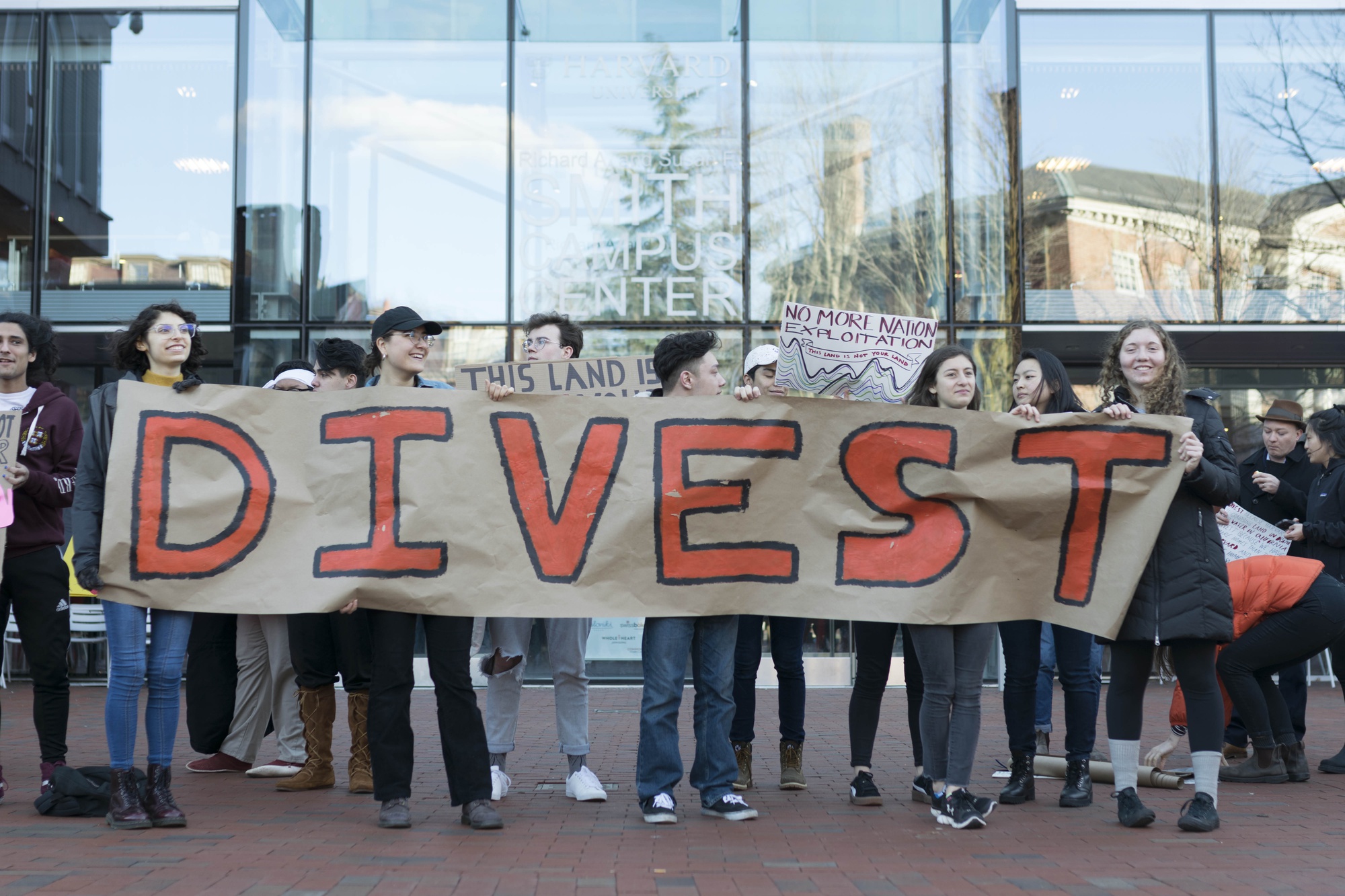 Students gather in front of the Smith Campus Center to protest Harvard's investments in Brazilian and Californian farmland.
Advertisement
Advertisement

The Rebirth of Harvard's Divestment Movement

The rally called for Harvard to divest from, and resolve all conflicts associated with, farmland across the globe. GRAIN, an international nonprofit working to protect small farmers, published a report last year accusing Harvard of buying and deforesting indigenous lands in Brazil and overdrafting water in drought-stricken California, along with other claims of unethical land management.
By Andrew Price and Matteo N. Wong

Two Harvard University Police Department officers block the entrance to Massachusetts Hall, watching nearly fifty people amass behind a poster with the word “DIVEST” written in massive orange letters. The students are a few dozen feet from the office of University President Lawrence S. Bacow. Accompanied by the cheerful strumming of a ukulele, they sing:

Isa C. Flores-Jones ’19 receives cheers as she enters Mass. Hall to give Bacow the group’s demands. She exits just moments later to another ovation.

Friday’s rally was the second event in a three-day campaign called “Land Under Siege,” organized primarily by Harvard Undergraduates for Environmental Justice. “Land Under Siege” consisted of a teach-in, the Mass. Hall rally, and an organizer training event.

The rally called for Harvard to divest from, and resolve all conflicts associated with, farmland across the globe. GRAIN, an international nonprofit working to protect small farmers, published a report last year accusing Harvard of buying and deforesting indigenous lands in Brazil and overdrafting water in drought-stricken California, along with other claims of unethical land management.

“The environmental movement is a social justice movement, so that’s the lens that we’re coming at it through,” HUEJ Co-President Arielle Blacklow ’21 says. The organization views the allegations against Harvard’s use of farmland as part of a larger conversation about environmental sustainability and fossil fuel divestment, according to Blacklow.

Despite the name “Land Under Siege,” however, the campaign’s events moved progressively away from land management, culminating in an organizer training session focused almost entirely on fossil fuel divestment.

Flores-Jones, the coordinator of Divest Harvard and a member of HUEJ, was a key organizer in the “Land Under Siege” campaign. She has watched the student movement for divestment and sustainability lose momentum throughout her four years at the college. “Land Under Siege” sought to recapture that lost energy.

One reason for declining student energy, Flores-Jones believes, is that climate change can seem abstract and seemingly distant from Harvard. “All of this is so, so, so far from the everyday realities of Harvard students,” Flores-Jones says. “We think of the University as so disconnected from these investment decisions.”

Divest activism focused on fossil fuels until she was contacted by Devlin Kuyek, a researcher at GRAIN, who brought her attention to land divestment. She says that Kuyek asked her, “‘here’s a place where Harvard’s active investments are hurting people right now and where the impacts of these investments are very tangibly being felt. Why aren’t you organizing around this?’”

More than two dozen undergraduates, graduate students, and Cambridge locals congregated in the Phillips Brooks House Association parlor room Thursday afternoon to learn about Harvard’s land investment practices and history from Kuyek, who Skyped into the room. He says that Harvard began investing in farmland during 2008’s global food crisis, and has spent approximately $1 billion to amass upwards of 2 million acres of land around the world.

Harvard Management Company spokesperson Patrick McKiernan wrote in an emailed statement, “The current natural resources team at HMC has made great progress in their multi-year repositioning of the portfolio. Their aim is to create a more focused and efficient portfolio that, in partnership with local managers, can meet or exceed our quality standards. As a result, we have sold a number of assets and are considering divestment from others.”

GRAIN calls for HMC to stop investing in farmland, resolve land and water conflicts with local communities ,and undergo independent assessments to compensate for any damage caused.

“Harvard Management Company focuses on environmental, social, and governance (ESG) matters for all of its investments, to ensure long-term value for both the asset and the communities in which we invest,” McKiernan wrote. “This commitment to responsible investing involves working with relevant constituents, including local authorities, to address any issues that arise during our investment, even if they predate HMC’s involvement.”

HMC’s sustainable investing guidelines include “respect indigenous people’s rights” and “factor in environmental sustainability,” though Kuyek alleged that Harvard has not been putting all of their guidelines into practice.

In order to transition to a more people-focused narrative, two HUEJ members — Roberta Jaffe and Steve Gliessman, owners of a small, family-run vineyard in California’s Cuyama Valley — joined in via Skype. They explained that though their groundwater supply had remained stable throughout California’s drought, it has been decreasing since Harvard opened an 850-acre vineyard nearby. Their powerpoint asked HMC to “stop exploiting land and water at the expense of local residents and natural resources.”

In April 2014, an HMC-owned company purchased 7,500 acres of vineyard land in the Cuyama Valley. The valley is one of 21 “critically overdrafted” basins in California, meaning that its groundwater, essential to agriculture during a prolonged drought, is not replenishing.
The teach-in ended with small groups workshopping the “Land Under Siege” demands.

The following afternoon’s rally begins with a group of around 30 students gathered outside the Smith Campus Center. They hold colorful signs made a week earlier at an art-build. One features bright pink and yellow hands on a globe and read, “Hands off the land!” Another, showing a cartoon-ish tree, reads, “Money doesn’t grow on trees, but it can protect them.” 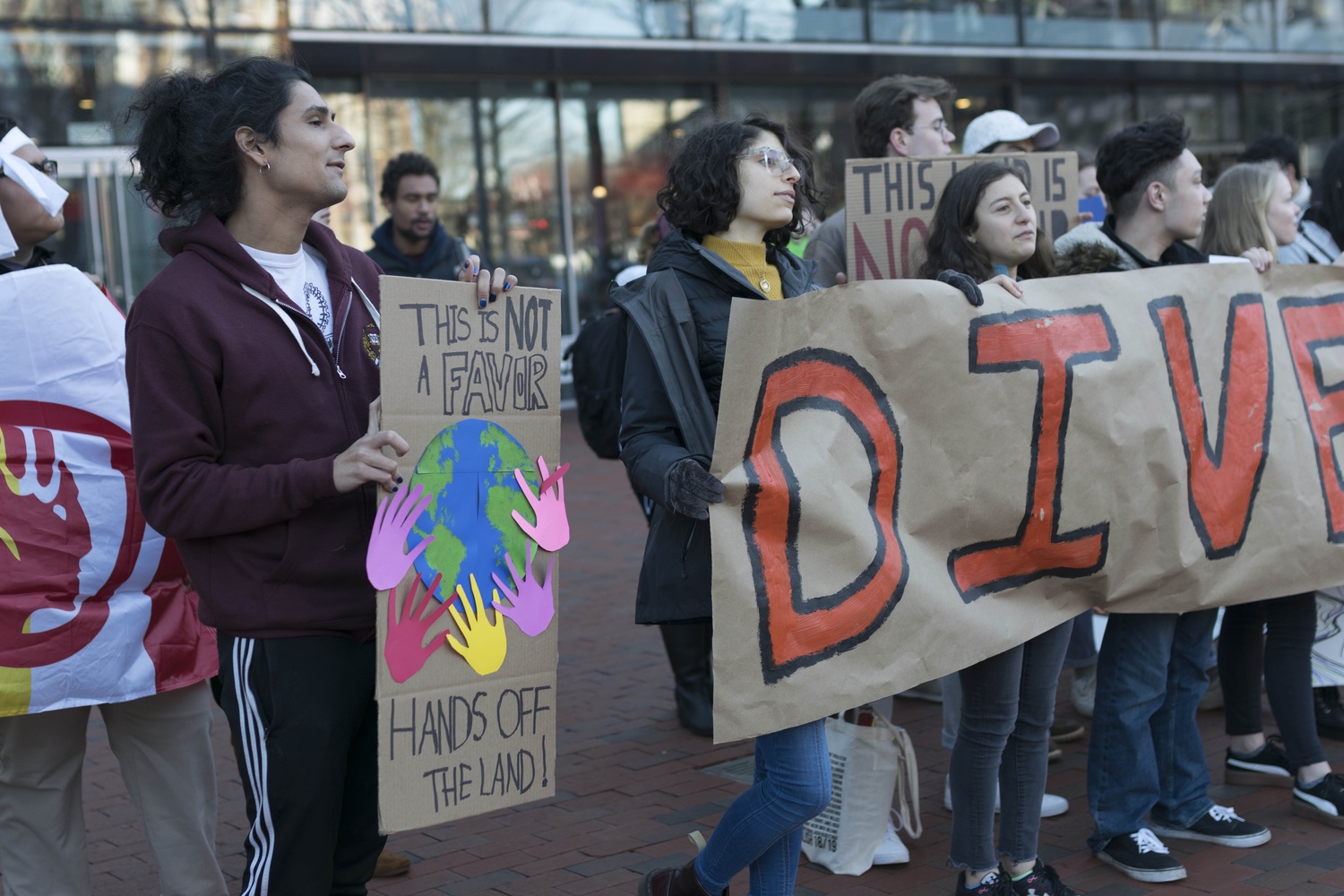 The Divest rally was a part of a three-day campaign called “Land Under Siege.” By Grace Z. Li

This rally also seeks to align divestment with other social justice movements by highlighting the disproportionate impact of Harvard’s investment policies on marginalized communities.

After a series of chants, which draw onlookers and swell the crowd to nearly fifty, James L. Walkingstick ’21, a member of Native Americans at Harvard College, leads the group in prayer while burning a bundle of sage in a large shell. NAHC was a co-sponsor of “Land Under Siege.”

“Coming from an indigenous background, this strikes me as something unacceptable, because land seizure over the past 400 years has been usually against indigenous peoples and that’s being seen with Harvard with what they’re doing in Brazil and Australia,” Walkingstick says in an interview. “Environmental justice is inherently indigenous.”

Fuerza Latina, a Latinx cultural group on campus, also co-sponsored the event. FM spoke to Xochitl Morales ’22, Fuerza Latina’s civil engagement chair, the day after the rally. (She clarified that she does not speak on behalf of all Fuerza Latina.)

“I got Fuerza Latina involved because this is something that affects several Latinx communities across the world, in Brazil where Harvard is investing, where Harvard is taking land,” Morales says. “Environmental justice is a Latinx issue.”

The rally’s focus, however, quickly shifts away from land divestment and the harms done to indigenous communities to fossil fuel divestment more broadly, with Zoe Grodsky, a junior at Middlebury College involved with Divest Middlebury, speaking next.

“Six years ago at Divest Middlebury we received a resounding ‘no’ vote from the board of trustees, and just one year ago they told us that Middlebury would never divest because it was at odds with maintaining the fiduciary responsibility to maintain the college in its perpetuity,” Grodsky says.

But, facing mounting student pressure, Middlebury announced in January that it would divest from fossil fuels.

“This initiative is truly a testament to the power of student activism and resistance,” Grodsky says, calling on Harvard students to join a global movement for divestment.

Critics of various forms of divestment often claim that, even if universities divest from fossil fuels, less environmentally-conscious companies will buy up those shares, which, as a result of divestment will be riskier and offer higher yields.

“The point is to diminish not just the finances of the fossil fuel industry,” says Ilana Cohen. “Divestment is about diminishing the reputation of the fossil fuel industry, of declaring publicly that it is unacceptable to invest in the climate crisis, the same way that divesting from businesses supporting the South African apartheid regime was really a declaration that it was unjustifiable to prop up an apartheid system.”

The first Divest Harvard campaign peaked in a week-long protest in April 2015 called “Heat Week.” Hundreds of students and several faculty members blockaded Mass. Hall for a week, occupied the Harvard Alumni Association headquarters for two days, and blockaded University Hall multiple times. But the University did not change its investment policies.

Flores-Jones began Saturday’s organizer training session with an account of this history, starting with a video released before Heat Week. She stressed the importance of establishing institutional memory, having seen divestment momentum peter out as past leaders have graduated.

During the training, approximately twenty people sat on colorful couches in the Lowell Inn around a tupperware container of chocolate chip cookies. Each person shared their name and how they were feeling in a single word — “optimistic,” “eager,” “energized,” “enraged.”

The training, which sought to harness post-rally momentum, touched briefly on land divestment, but devoted the vast majority of its time to fossil fuels, giving the impression that land divestment was being used as a vehicle to generate energy surrounding climate change.

Three members of Harvard’s faculty — Regina C. LaRocque, James M. Recht, and Caren G. Solomon ‘84, all of whom have appointments at Harvard Medical School and are signatories to the “Faculty Petition for Fossil Fuel Divestment”— spoke at the event.
Recht said he believes faculty can help in three ways: moral support, emotional support, and potentially by “[lending] our bodies for participating in civil disobedience.”

“You guys aren’t supposed to be in this position where you take care of things for us,” he said.

The faculty left, and the meeting transitioned to planning a series of semester-long escalations. Crimson reporters were politely told to leave.