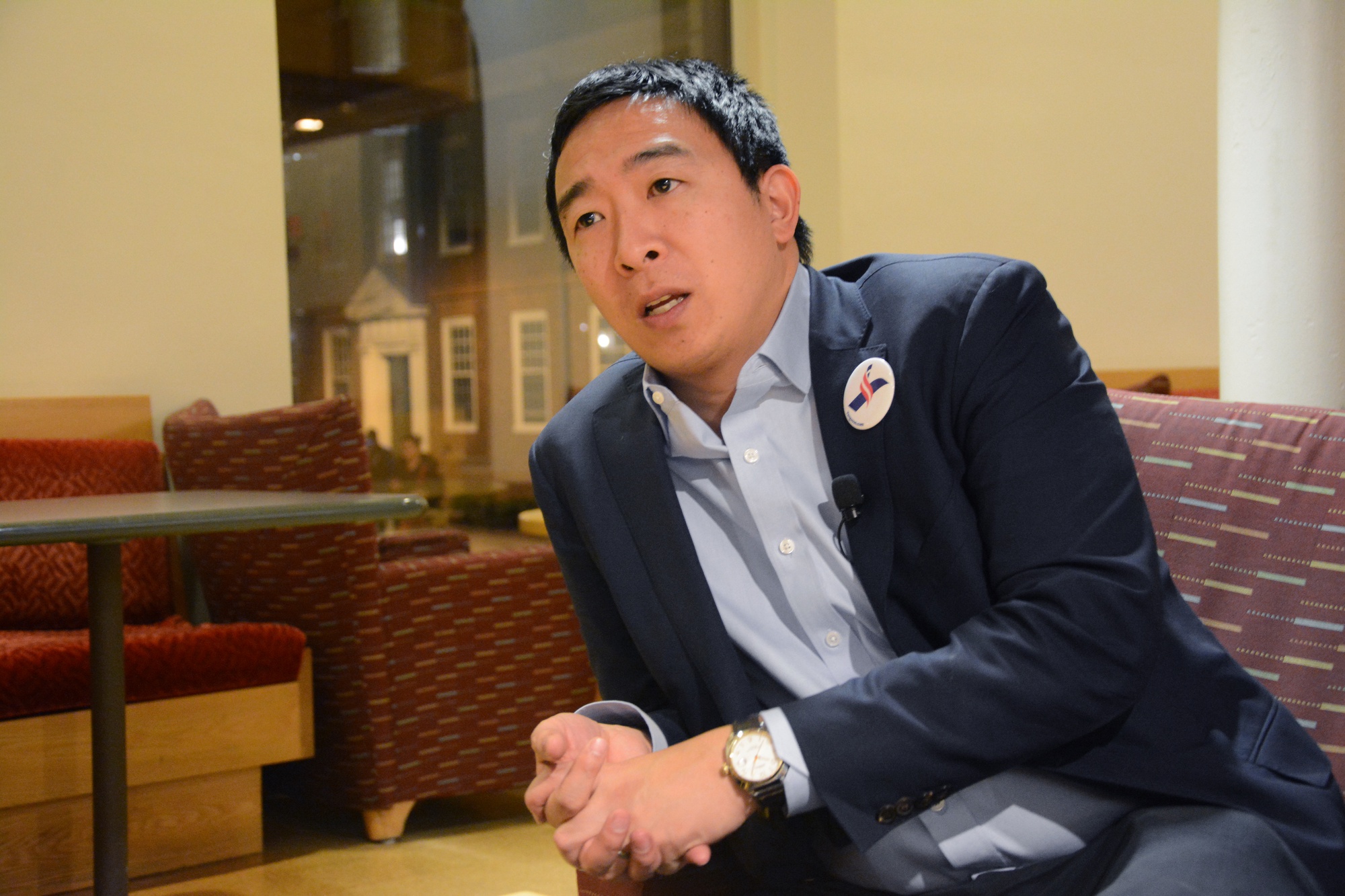 Is Andrew Yang the Anti-Trump?

“I certainly do not relish being compared to Donald Trump,” Yang says in an interview with Fifteen Minutes, calling such comparisons “unfortunate, because Donald Trump gives real entrepreneurs a bad name, and entrepreneurs like myself regard him as more of a marketing charlatan than a real builder.” As he tells the crowd, “the opposite of Donald Trump is an Asian man who likes math.”
By Madeleine M. Joung

It’s a Friday night, but Fong Auditorium is so packed that people are sitting in the side aisles. Everyone is here to see Andrew Yang, one of the contenders in a crowded field of candidates all vying for the 2020 Democratic primary nomination.

Yang is an entrepreneur who has never held elected office, and his candidacy has been dubbed “longer-than-long-shot” by the New York Times. Sound familiar? As late as September 2015, that same newspaper ran an article on “why Donald Trump is still a long-shot.”

So don’t count out Andrew Yang just yet. If Trump beat the odds in a crowded primary, maybe Yang can too. He’s currently in a statistical tie with Sen. Kirsten Gillibrand (D-NY); a Feb. 4 Monmouth poll rated both candidates likely to receive 1 percent of Democratic votes.

Yang portrays his outsider quality as more of an asset than a liability. “So many Americans have lost faith in our government to actually solve our problems,” he tells the auditorium. “They were so desperate they would turn to Donald Trump. And they’re looking for a new voice of reason.”

“I certainly do not relish being compared to Donald Trump,” Yang says in an interview with Fifteen Minutes, calling such comparisons “unfortunate, because Donald Trump gives real entrepreneurs a bad name, and entrepreneurs like myself regard him as more of a marketing charlatan than a real builder.” As he tells the crowd, “the opposite of Donald Trump is an Asian man who likes math.”

But Yang has focused his campaign on the imminent loss of jobs to technology — especially positions in manufacturing, retail, call centers, and fast food restaurants — in an appeal to voters similar to those targeted by Trump’s campaign.

“Donald Trump’s our president today because he got a lot of the problems right,” he tells the audience. “But his solutions are obviously the exact opposite of what we need: build the wall, freeze time, turn the clock back, and what I’m saying is we need to turn the clock forward.” The keystone of Yang’s platform is instituting a universal basic income policy – $1,000 per month for every American between the ages of 18 and 64 – to provide a safety net as technology eliminates certain jobs.

His warnings of the impending technological revolution are interspersed with moments of levity. He recounts to the audience that during a recent interview, when asked whether he’d always wanted to be president, he replied, “Obviously not. I’m Asian. The list from my parents went like doctor, lawyer, full stop.”

This draws laughs. The faces in the crowd are mostly East Asian; Yang has been invited to talk about “the Asian-American experience” by the Harvard Project for Asian and International Relations, the Asian American Brotherhood, and the Harvard-Radcliffe Chinese Students Association. (The organizers of the Feb. 8 event — Shivam A. Bhatt ’20, Charles X. Hua ’22, and Ryan S. Jiang ’20 — wrotein an emailed statement that their events “are not an official endorsement of any political entity; rather, [they] hope they serve as forums for discussion and education surrounding pertinent social issues.”) 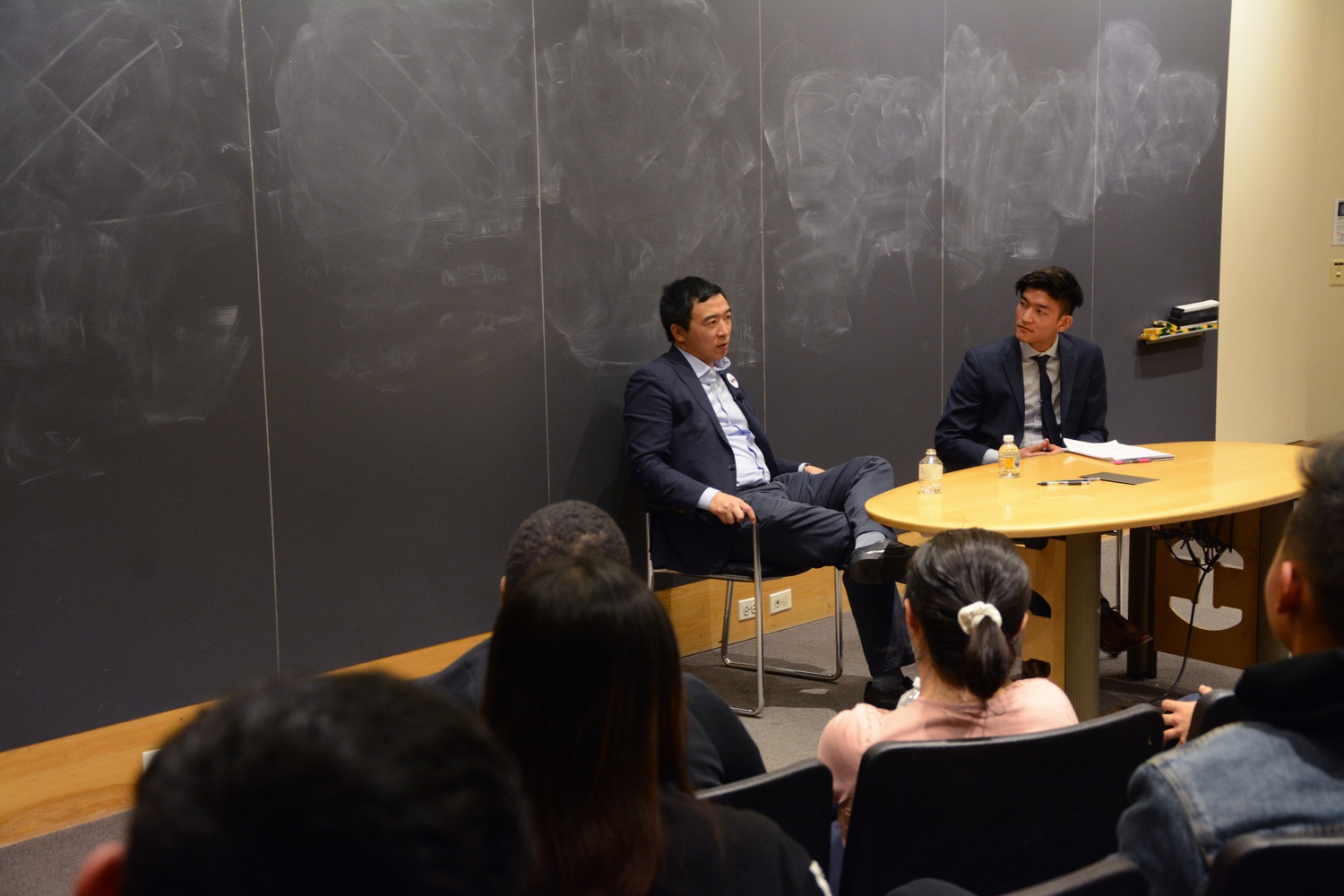 Yang has been invited to talk by the Harvard Project for Asian and International Relations, the Asian American Brotherhood, and the Harvard-Radcliffe Chinese Students Association. By Ryan N. Gajarawala

Yang is second-generation Taiwanese-American. “I grew up the scrawny Asian kid who skipped a grade in an all-white neighborhood,” he tells the crowd. “So I always felt like my masculinity was being questioned at all times.” In his own words, he “really Americaned up,” and his Chinese language skills are “terrible.”

But in adulthood, he didn’t feel his Asian-American identity was a roadblock until he hit the campaign trail. “I have never felt diminished in my career professionally, until this past year,” he tells the audience. “Now, not to say that I’m hurting over it, because I’m actually kinda kickin’ ass.”

In an interview with FM, Yang outlines a foreign policy platform that would decrease America’s international military presence. He supports withdrawing American troops from Syria — though he is quick to note that he doesn’t approve of the Trump administration’s execution — and he supports a timetable for a drawdown of troops in Afghanistan. He also supports direct negotiation with North Korea and says he wants to improve America’s relationship with China.

“I think China’s being set up as the antagonist by the U.S.,” he says to the crowd. “If we can see China’s rise as complementary, that would be the best hope. That, unfortunately, is not what I think is the American tendency. But if I become president, hopefully I can make it so.”

His platform on the relationship between China and Taiwan is not yet fully developed. “I have a lot of affection for the people of Taiwan,” he tells FM. “I think that right now, the situation that’s worked out well for both sides, where Taiwan helps China’s economic growth over the last number of years — and hopefully people on both sides of the street will be able to enjoy the future together.”

Asked by FM for his position on American arms sales to Taiwan, he replies, “I’d have to look at the policies that are in place, you know, when I’m in power. I have an open mind about the way things are done. So I wouldn’t want to talk about that until I was actually there and could look at the specifics.”

Near the end of the event, the topic of China comes up again. Yang announces to the crowd, “I’m a cult hero in China already. The Chinese government took three days to think about it, and then decided they really liked this — the Asian guy running for president. So they put my face all over Sina, and Weibo, and WeChat, and then the rest of it.” 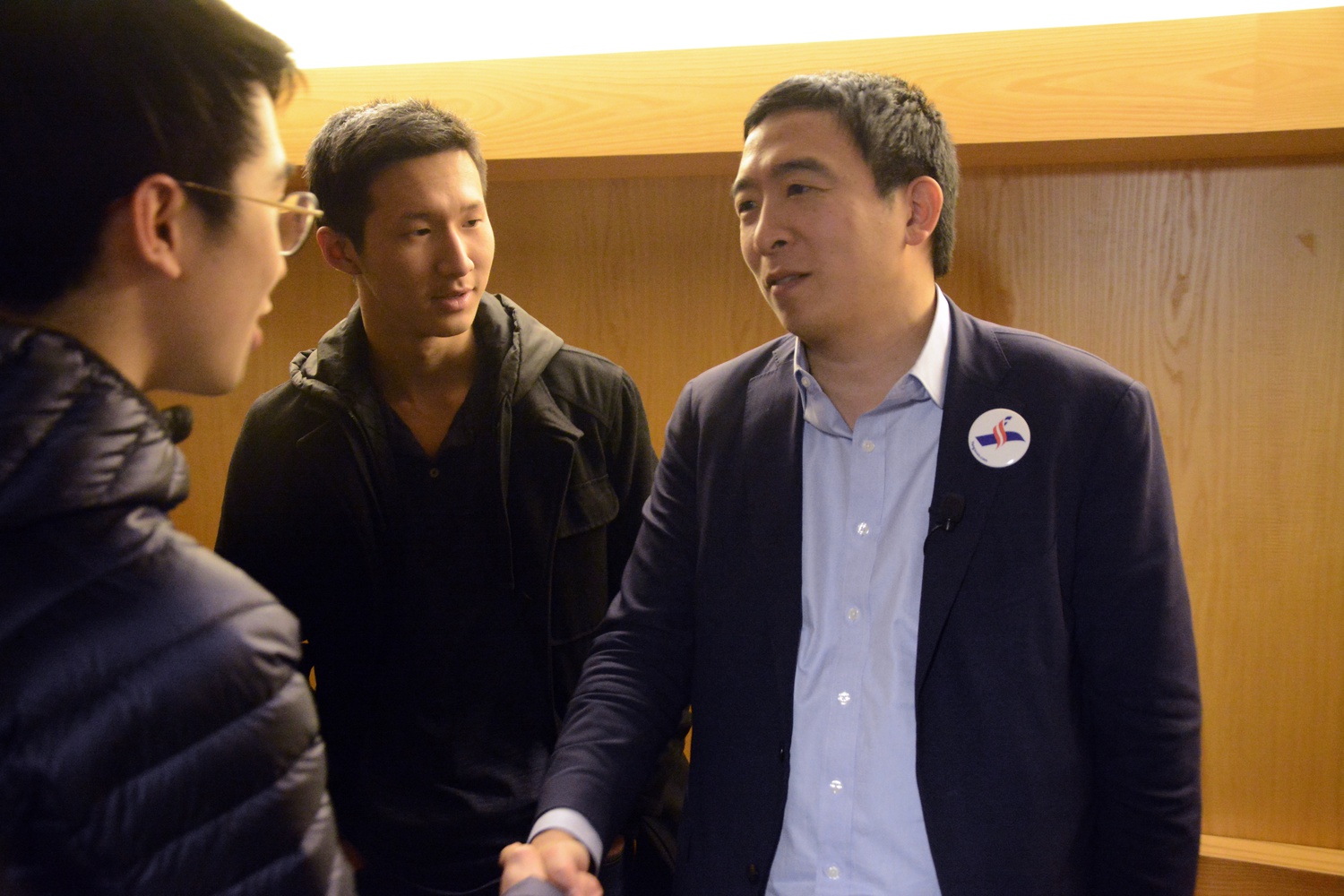 Andrew Yang interacts with Andrew Wang '22 and Ran Bi '22 after the event in Fong Auditorium By Ryan N. Gajarawala

At this, there’s some rustling in the audience. Yang is referring to Chinese social media platforms, which are closely monitored by the Chinese government through its State Council Information Office.

Yang goes on to tell the crowd a story about a consequence of his WeChat fame — “little old Chinese ladies” appearing to recognize him on the New York City subway.

Later, in a phone interview with FM, Yang says, “I appreciate the fact that people are proud of my candidacy really for any of a number of reasons, and you know, it’s not that I’ve done anything to reach out to folks abroad, but I appreciate their enthusiasm.”

He also emphasizes that “there is no relationship” between him and the Chinese government. “They have not reached out to me at all,” he says.

Is Yang concerned about the parallels between the Chinese government’s support for his campaign and the Russian social media meddling that boosted Trump’s candidacy in 2016?

“Well, you know, I mean, there would be zero equivalency there because it’s not like I’m reaching out to the Chinese government,” he replies. “There’s no one who has a financial interest in my election, and I’ve received zero indication that anyone’s helping me in any way. And, certainly, if I did think that there was some foreign actor that was involved in my campaign, I would notify the proper authorities, because I have zero desire to win the White House in some way that ends up tainting the process for the American people.”

On Yang’s campaign website, he writes he is concerned “foreign actors, particularly Russia, intend to do us harm and capitalize on our freedom of information.” In response, he wants to establish an FCC-controlled News and Information Ombudsman that would have the power to “impose fines as necessary” against companies that spread “demonstrably and deliberately false” news.

The same page on the campaign website reads, “We need to start monitoring and punishing bad actors to give the determined journalists a chance to do their work.” Yang’s ombudsman would have the online power to “work with social media companies to identify fraudulent accounts and disable and punish responsible parties.”

In response to concerns that monitoring and fining the media could create a slippery slope, Yang tells FM that he would like to “follow the BBC model, where what you do is you file a complaint about a particular thing, and then there’s like, a tribunal. And so there’d be some checks baked into it, you wouldn’t have some government agency with unfettered authority, you would have a civilian board.”

The BBC complaint system sometimes results in apologies and corrections, according to its website. Financial penalties may be assessed if the complainant appeals to the BBC’s regulator, the Office of Communications (“Ofcom”). The Ofcom website explicitly states that they regulate TV, radio, and on-demand content, but “don’t handle” other forms of media including “newspapers and magazines, or what people write or post on the internet.”

After the event, many of the attendees stick around for handshakes and pictures with the candidate, who introduces himself as simply “Andrew.” Half an hour later, some are still waiting their turn.

In the lobby, one woman asks her friend what he thought of Yang. “I think he was very down-to-earth, very humble,” he replies. “I could see him and Kamala Harris getting into a close race.”