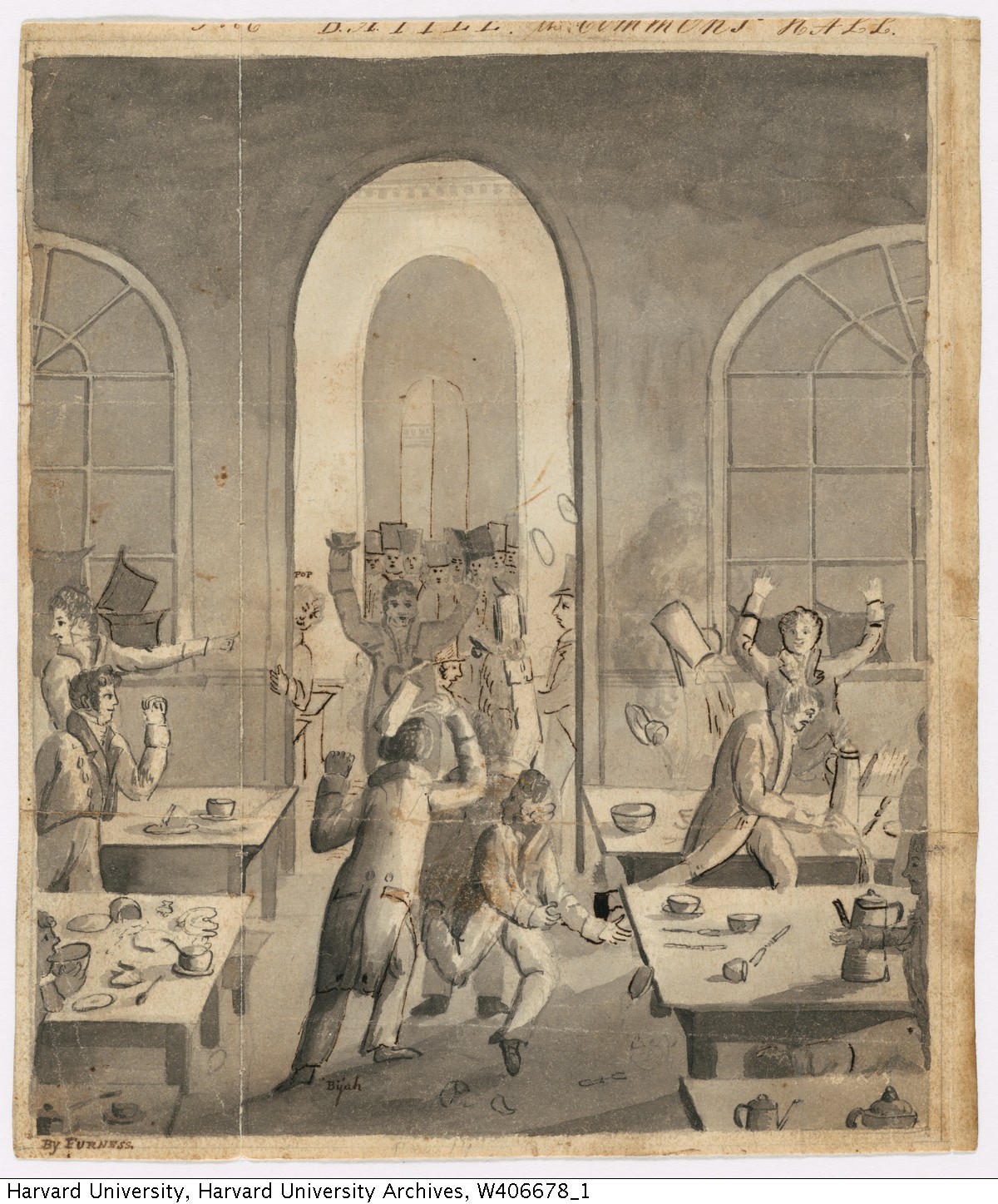 In the Rebellion of 1818, Harvard's most famous food fight took place resulted in the expulsion of all 80 members of the Sophomore class.
Advertisement
Advertisement

When the Sophomores Threw Potatoes

Two hundred years ago, a major food fight went down — and an entire class was expelled for it.
By Scott P. Mahon

Imagine students hurling red spice chicken and the HUDS “Catch of the Day” from table to table. Proctors and professors scurry around trying to avoid the army of students throwing mashed potatoes. HUDS workers take cover behind trays and countertops to avoid the flying Italian wedding soup, and glorious paintings are splattered with blue Powerade. But could a food fight ever really overtake a dining hall at Harvard?

In fact, Harvard’s most famous food fight took place just over 200 years ago.

In 1818, the freshman and sophomore classes participated in a food fight in Commons Hall, now University Hall, that left nearly all of the University’s crockery destroyed and resulted in the expulsion of all 80 members of the sophomore class.

It all started with a piece of buttered bread. Although Robert W. Barnwell, class of 1821, was the initial assailant, his motive remains unclear. Mary Prescott, who summarized witness accounts in a letter to her brother Charles, class of 1821, wrote that she believed the fight was started “in jest.” The Harvard Corporation, in its justification of the students’ eventual expulsion, attributed the fight to student unrest about poor food quality.

In the Rebellion of 1818, Harvard's most famous food fight took place resulted in the expulsion of all 80 members of the Sophomore class. By Courtesy of Harvard Archives

Augustus Peirce, a junior at the time, recounted the fight in a satirical poem titled “The Rebelliad.” He wrote of the beginning of the fight:

Nathan threw a piece of bread,

And hit Abijah on the head,

The wrathful Freshman in a trice,

Sent Back another bigger slice;

Which being butter’d pretty well,

Made greasy work where’er it fell.

Before long, the freshman and sophomore classes were engaged in an all-out food fight. The open architecture of Commons Hall provided ample space for students to launch food at each other. Potatoes dipped in gravy were an especially coveted projectile given their durability and gooey consistency.

Initially, two students were suspended for the mess, including Barnwell, the inspiration for “Nathan” in “The Rebelliad.” Less than a week after the food fight, the entire sophomore class marched around what they called the “Rebellion Tree,” chanting “never leave your class” as a battle cry for their suspended classmates. John Snelling Popkin, a professor of Greek language, was one of the few professors who tried to settle the unrest at the Rebellion Tree. Soon after, students formed a raucous circle around him, dancing and hollering. More students were suspended that day.

In response, the entire class of 1821 — including Ralph Waldo Emerson, future literary legend — dropped out in protest of what they believed was the tyrannical mistreatment and harsh penalization of their classmates.

Kirkland called a meeting with the Corporation, at which they formally agreed to expel the entire class for their “resistance to the authority of the College.”

Around a week after their expulsion, about 30 members of the class of 1821 — including Emerson — applied for readmittance to the University. They had to pledge to follow University rules and sign “an expression of readiness to submit” from Harvard.

A year after the 1818 food fight, David W. Gorham, class of 1821, reflected on the rebellion in a letter to his former classmate Charles Prescott. Despite being one of the students eventually readmitted to Harvard, he maintained his belief in the righteousness of the rebellion. He wrote that he felt “a little puff of vanity” as a leader of the movement against Harvard administration, and that he continued to feel “disappointed in several students’ non-committal behavior” toward the cause.

—Magazine writer Scott P. Mahon can be reached at scott.mahon@thecrimson.com.