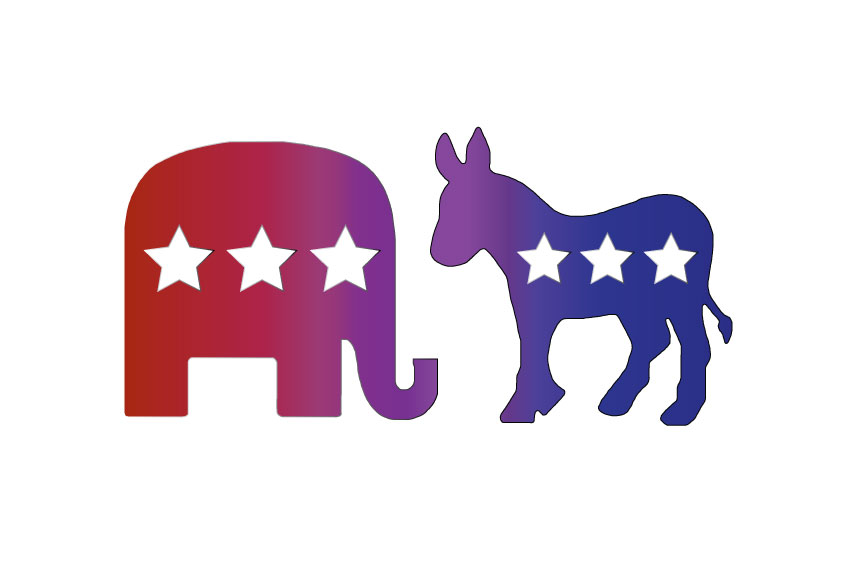 Can the Center Hold?

Alexis M. Mealey ’21 is skeptical of labels. Political labels, that is, like “Republican” or “Democrat.” Mealey’s personal beliefs, she says, do not fit neatly into the platforms of either party. Though she is the president of Harvard’s chapter of the Network of Enlightened Women, an organization for conservative women, she is pro-choice and passionate about prison reform.

“I think the state of U.S. prisons is repulsive,” she says, “and I would have loved to work with the College Dems on an initiative to handle that, but I don’t really fit the Democratic model, especially being a former Republican.”

This dissatisfaction with partisan politics led Mealey, along with her two co-founders Sarah B. Gill ’21 and Samantha J. Frenkel-Popell ’21, to found the Harvard Undergraduate Centrist Society. The organization had its first introductory meeting last month.

“I’ve been thinking about this since the Visitas debate,” Mealey says, referring to the annual debate between the Harvard College Democrats and the Harvard Republican Club during the College’s accepted students weekend . Both Mealey and Gill attended the debate, and both left feeling disappointed.

“At one point, they were talking about the environment,” Gill recalls, “and the College Republicans very clearly said, ‘We know this isn’t something that a lot of Republicans say… but yeah, we believe in climate change. Climate change is real.’ And one thing that discouraged me was that the Democrats were like, ‘Well then, you’re not a Republican.’ People aren’t really willing to compromise or talk about the issues. It’s more about the name you put on yourself with a political party.”

Gill ultimately joined the College Democrats, and Mealey joined the Republican Club, but both felt that these labels impeded “actually discussing issues in any kind of meaningful way,” Mealey says.

Frenkel-Popell, the Centrist Society’s other cofounder, worked extensively with independent movements and campaigns during her gap year. She says she also felt frustrated when it came to having productive political discussions.

The founders want the Centrist Society to be more than just a space for debate, however. The organization plans to adopt a legislative agenda each semester, focusing on one issue with the potential of expanding it to the next semester as well. “We’ll select [the issue] as an organization at the beginning of the semester and work from there,” Mealey explains. “That will include researching policy solutions, creating bipartisan policy proposal, and then bringing them to whatever relevant bodies exist.” This semester’s agenda has not yet been chosen.

Though the organization says its board members are evenly split between the center-left and center-right, they are not looking for a club comprised solely of political moderates, making “Centrist Society” seem almost like a misnomer. “We want Communists, we want anarchists, we want them all,” Mealey says. “It’s just about coming with a willingness to listen. That’s all we want people to do.”

Mealey believes that no particular political stances should be explicitly off-limits, though she does set some conditions. “If you’re invalidating someone’s identity by your political opinion, then yeah, it’s probably wrong, but we want an entire range of respectful opinions, no matter how far on the spectrum they fall,” she says.

When asked what differentiates a “respectful” opinion from an “invalidating” one, Mealey explains that it all comes down to intention. “We want people who are coming with political opinions that are grounded in fact and aren’t grounded in some kind of abject hatred that has no place on campus,” she says. “We don’t necessarily want to exclude anyone’s political beliefs by creating an oppressive environment for speech.”

Mealey is also the president of the Harvard College Open Campus Initiative, a pro-free speech organization known for inviting controversial speakers such as Charles Murray to campus. “My decision to join OCI was totally separate from my decision to start [the Centrist Society],” Mealey says, but she adds that the two groups address what she calls “a common theme” at Harvard: “We are very, very hostile to people’s opinions, even when we haven’t necessarily heard all of them.”

“That’s not to say we’re not working to reinvigorate the center. We’re doing work with independent movements and center-right, center-left movements and various campaign reform groups, because we find that really important,” Frenkel-Popell adds.

Within Harvard, student reactions to the Centrist Society seem to be largely positive. “We are very excited to see more political engagement on campus. We will continue our focus on progressive political activism, but we always welcome new ideas on campus,” says Riley E. Hoveland ’22, the communications director of the Harvard College Democrats.

Victoria M. Marquez ’20, the president of the Harvard Republican Club, feels similarly. “I support the mission of bringing together people of different ideologies to try and work together and find bipartisan solutions,” she says.

Some students, like Molly C. Nolan ’19, expressed doubts about the Centrist Society’s vision, which includes bringing together everyone from Trump supporters to Bernie fans. “I think that’s very idealistic,” she says. Though Nolan thinks bipartisanship is “a very good, very important thing,” her perspective is shaped by her understanding of politics in her home country of the United Kingdom.

“I identify as being center-left in the UK,” she says. “Our left-wing party and our right-wing party, they both split and formed a center group with politicians that ultimately don’t have that much in common... It’s a very rocky foundation.”

But Gill notes that the Centrist Society is gaining traction outside of Harvard. “Salve Regina, which is a school in Rhode Island, just asked us for our Constitution, because they are looking to make similar clubs,” she says. “So we’re just hoping that this kind of mentality of collaboration and going across the aisle spreads, because there needs to be a change in politics.”