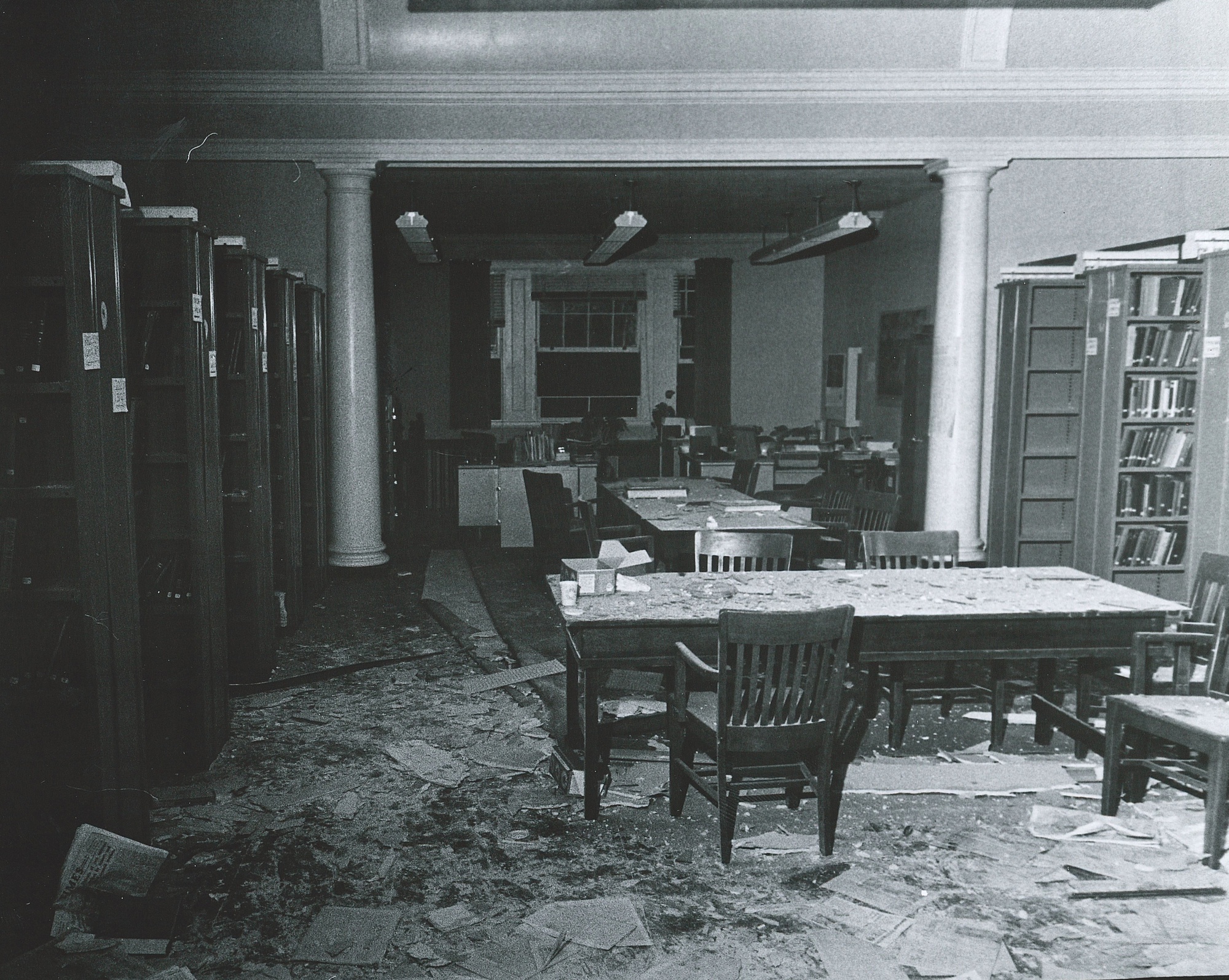 On October 14th, 1970, an explosion ripped through the third floor of the Harvard Semitic Museum, just north of Harvard Yard By Courtesy of The Harvard Archives
Advertisement
Advertisement

As the museum’s current deputy director and curator, Joseph A. Greene, notes, “the more interesting story here is the story of the story, not the story itself.” In the decades since the bombing of the Harvard Semitic Museum, the specifics have faded. “The facts about the event itself … get a bit lost in all the mythology,” Greene says. “That’s what I mean about the story of the story.”
By William C. Swett and Michael D. Wallace

Shortly after midnight on Oct. 14, 1970, an explosion ripped through the third floor of the Harvard Semitic Museum, just north of Harvard Yard. It left several offices demolished — but beyond its physical destruction, it also gave rise to an ever-changing mythology about the museum.

A few hours earlier, activists protesting America’s continued involvement in the Vietnam War had placed a bomb in an office on the third floor, timed to detonate when the building was empty. They had targeted the third floor of the Harvard Semitic Museum — then home to Harvard’s Center for International Affairs — because it had once contained the office of Henry Kissinger ’50 during his time as a professor. However, by the time the bomb was placed October 1970, Kissinger had long since relocated to Washington, D.C., to serve as President Richard Nixon’s National Security Advisor.

The bomb’s explosion caused major structural damage to the upper floors of the Semitic Museum, toppling bookshelves, blowing out windows, and causing part of the attic’s floor to collapse. Two offices were completely destroyed and a third was damaged. At the time, a Harvard spokesperson estimated that the cost of the damage was below $40,000. The Boston Globe later reported a figure closer to $20,000.

Following the bombing, both the Cambridge Police Department and the Harvard University Police Department conducted investigations. The next day, an anti-war activist group called the Proud Eagle Tribe stepped forward to claim responsibility, sending a letter postmarked from Cambridge to various news organizations in the Boston area. According to the letter, published in The Crimson on Oct. 15, 1970, the bombing was the first action of a “fall offensive … from Cambridge Commons to the ‘I’ Labs of M.I.T.”

The group described itself as a tribe of “revolutionary women” in the letter, and said its mission was to attack “the enemy every-where he shows his ugly face.” The bombing was the culmination of a series of conflicts between the CFIA and students in 1969 and 1970. The Proud Eagle Tribe said the CFIA researched “new ways for the Pig Nixon to try to destroy people’s wars in Asia, Latin America, and the Middle East” and produced “toads like Henry Kissinger, who left the Center to join Nixon's death machine.”

Cambridge police looked for two female suspects who were seen entering the museum on the day of the bombing, but they were never apprehended. In the end, despite involvement by the FBI, the investigations were unable to discover the true identities of the perpetrators. A few weeks after the incident, the feminist magazine Off Our Backs reprinted the Proud Eagle Tribe’s letter.

“Police are presently seeking two unidentified women in connection with the bombing,” the magazine wrote in an introductory note to the letter’s text. “Nobody knows if they are members of the Proud Eagle Tribe — or indeed if the Tribe really exists.”

The immediate impact of the bombing was minimal. It was condemned by student activist groups on campus. Harvard President Nathan M. Pusey ’28 was eager to move on, stating that he was, “confident the entire University will draw together in pursuing its work, sobered, thankful there was no loss of life.” Despite the high-profile nature of the bombing, the CFIA did not leave the Semitic Museum until 1978.

That seems a likely end to the story of the Harvard Semitic Museum bombing. It wasn’t.

As the museum’s current deputy director and curator, Joseph A. Greene, notes, “the more interesting story here is the story of the story, not the story itself.” In the decades since the bombing of the Harvard Semitic Museum, the specifics have faded. “The facts about the event itself … get a bit lost in all the mythology,” Greene says. “That’s what I mean about the story of the story.” 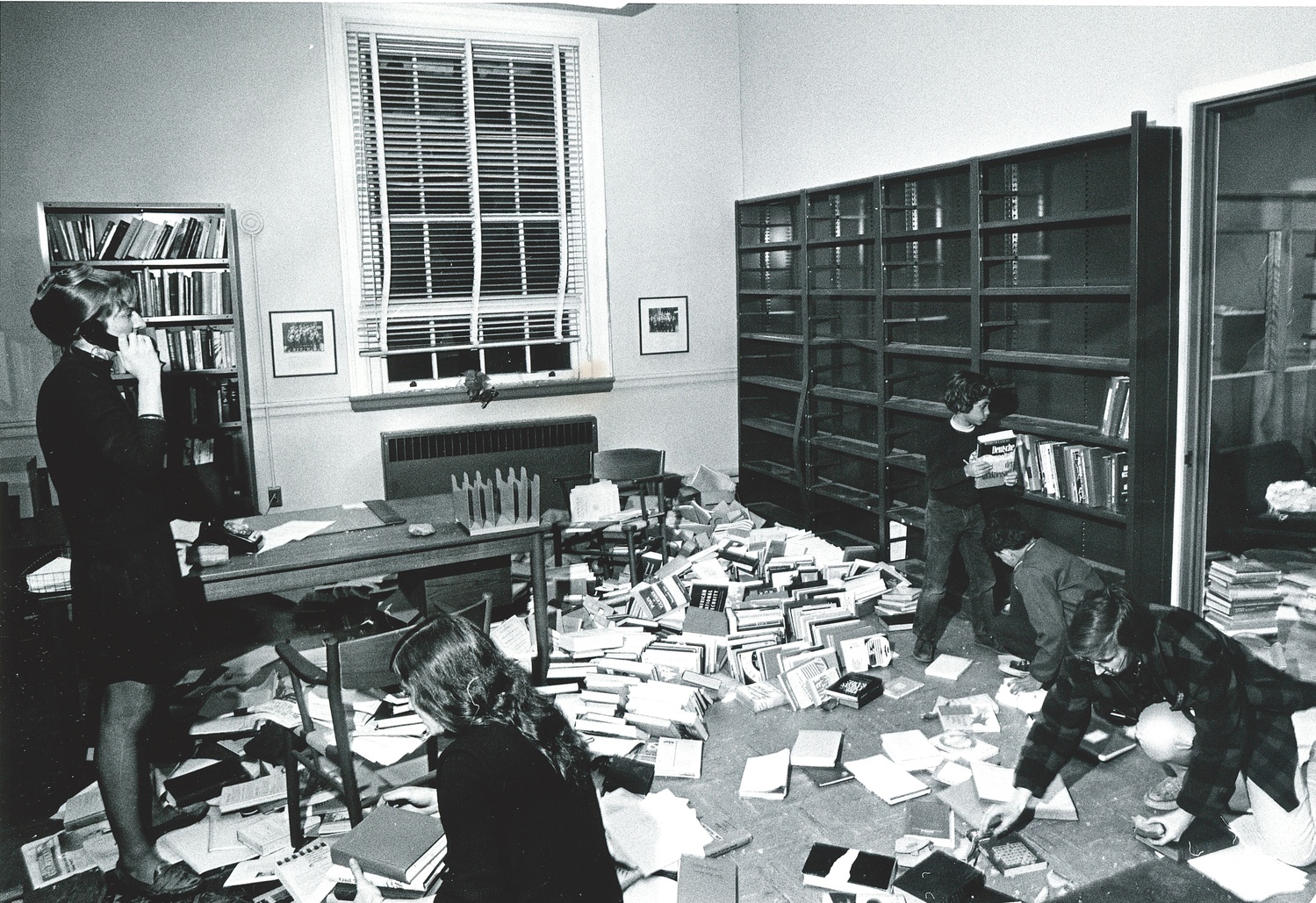 The bomb’s explosion caused major structural damage to the upper floors of the Semitic Museum, causing part of the attic’s floor to collapse. By Courtesy of The Harvard Archives

A key part of that “story of the story” involves the so-called Bonfils photographs, a collection of images of the Middle East that formed part of the Semitic Museum’s original exhibit in the late 19th century. Museum lore says the explosion uncovered tea crates filled with some 28,000 photographs, negatives, and other photographic materials stored in the attic. Supposedly, they had been forgotten for almost 90 years.

According to the myth, when investigators and museum staff cleared the debris and began repairs, they found a treasure trove of large black and white photographs of people and locations in the Middle East. Produced by Maison Bonfils, a printing house in Beirut, Lebanon, the photographs were widely distributed in Europe and North America to provide Western audiences with a glimpse into life and culture in the Middle East. Following their ‘rediscovery,’ the photographs became notable for the insight they provided into how the Semitic Museum had historically treated the region. Curators at the museum hurried to incorporate them into a new photographic archive in an effort to revitalize the museum, and the photographs remained on exhibit until the 1990s.

However, this version of the story is up for debate.

According to Greene, there was no great moment of discovery, no forgotten trove of photographs, and no excited rush to develop a new exhibit. Instead, most of the photographs had been catalogued and stored in the museum basement, and their number was far below 28,000 at the time of the bombing. Moreover, the exhibit, while real, opened almost a decade after the bombing, in the early 1980s. But these facts were lost in an effort to generate excitement for the photographs before the opening of the exhibit.

The story of the bombing has continued to evolve over the years. In a 1993 op-ed for The Crimson, Social Studies lecturer Martin Peretz wrote, “Found in the rubble of virtuous indignation was one of the world's largest collections of early Middle Eastern photographs, a treasure in its way as great as the archaeology and ethnographic materials which first gave the museum its reputation.”

The academic Barclay G. Jones used the example of the bombing of the CFIA in a 1986 book to show how disasters can sometimes reveal “forgotten cultural elements.” Citing the former curator of the Semitic Museum, Carney E. S. Gavin, Jones wrote that the bombing revealed, “the largest collection in the world of nineteenth century views of the Middle East, an enormously valuable historic record.” Greene suggests that even those who were alive at the time of the bombing have since absorbed the myth surrounding it — as Jones’s text demonstrates.

The story has also provided invaluable material for students looking for a topic for a term-paper or inspiration a for a thesis. In the past few years alone, several Harvard affiliates have approached Greene in hopes of finding out more about the Semitic Museum bombing.

“It recycles,” Greene says. “It is embedded in some of these articles that people read and believe, and it won’t go away.”

“In a couple years, another undergrad will approach and say, ‘Well, what about this bombing?’” And so the story of the story will start once again.