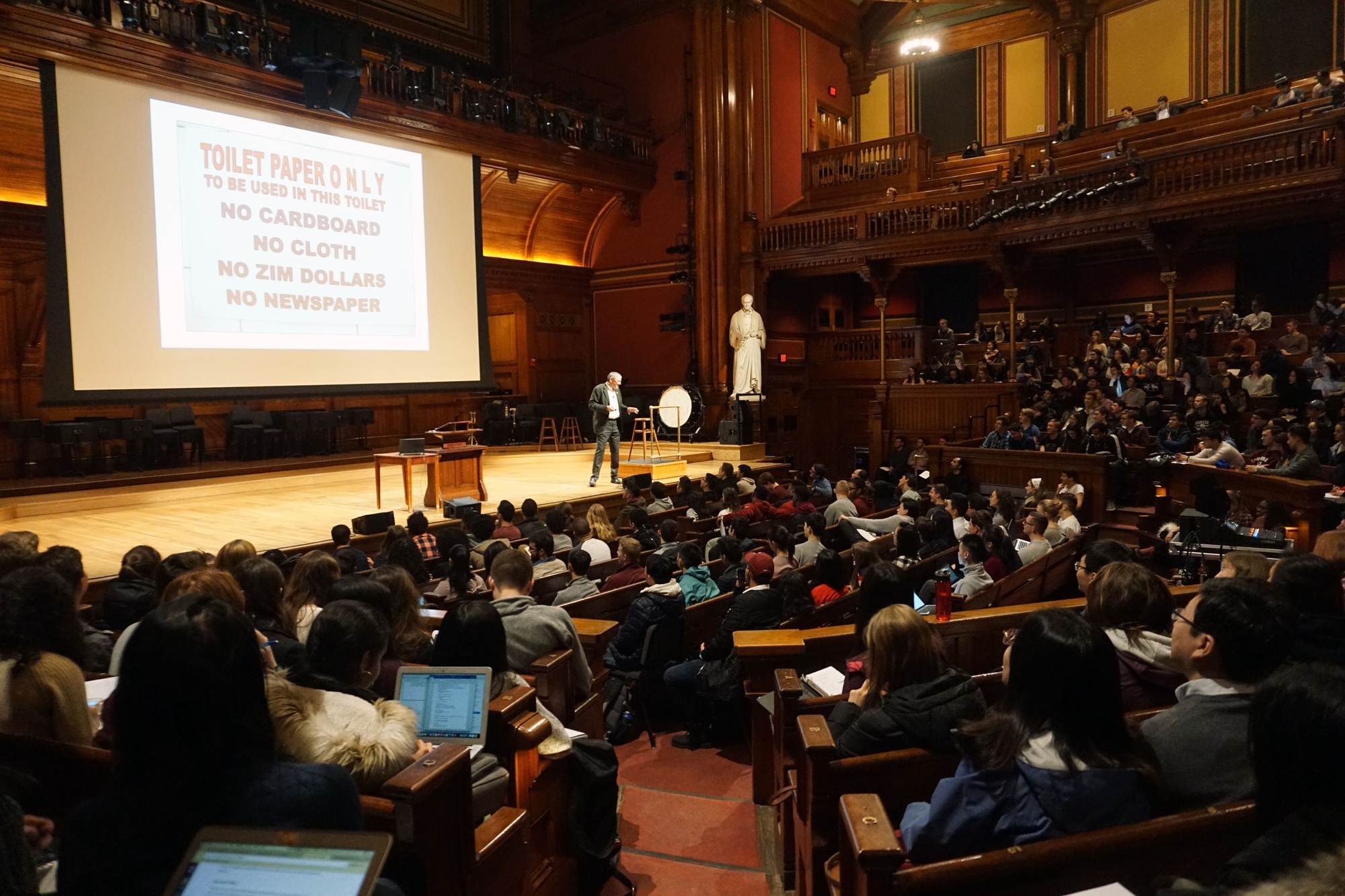 Professor N. Gregory Mankiw discusses the inflation of Zimbabwe dollars at the first lecture of Economics 10B: Principles of Economics in Sanders Theatre.
By Molly C. McCafferty, Crimson Staff Writer 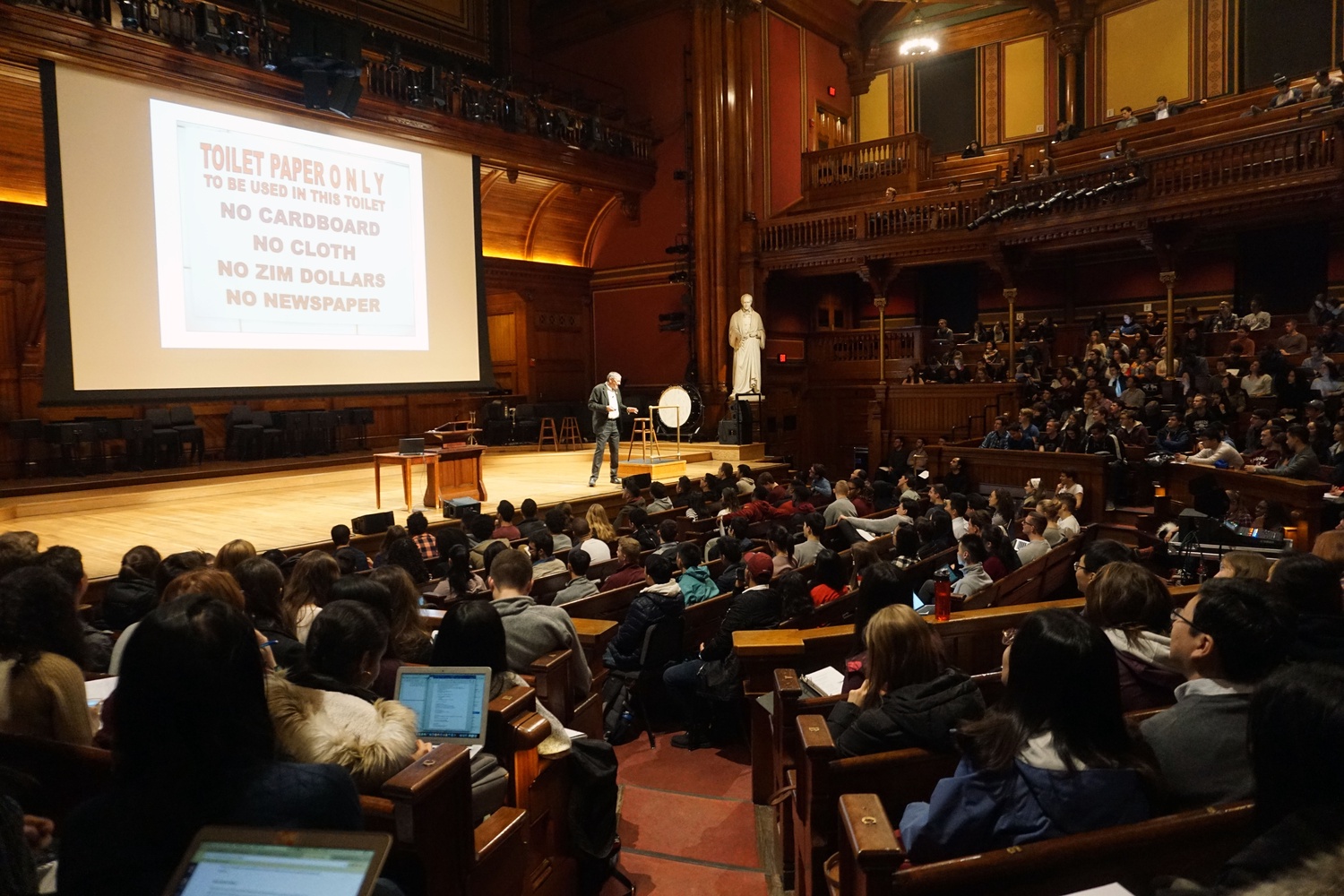 After more than a decade at the helm of one of Harvard’s largest courses, Economics Professor N. Gregory Mankiw announced in an email to graduate students Monday that he will step down from teaching Economics 10: “Principles of Economics” at the end of this semester.

The Economics Department has not yet found a replacement for Mankiw, who has taught Ec 10 — the department’s year-long flagship introductory course — for 14 years. Both the fall and spring iterations of the course consistently rank among the College’s most popular offerings, coming in at 585 students and the College’s top-enrolled class this spring.

Mankiw wrote in an email to The Crimson that he chose to step back from Ec 10 to pursue “new pedagogical challenges.” He also wrote that he plans to take a sabbatical next year and return to teach in 2020.

“After 14 years as ec 10 course head, as well as one year long ago as a section leader, I decided it was time to pass the baton,” he wrote. “Teaching ec 10 has been a wonderful experience, but I am looking forward to new pedagogical challenges.”

“Looking ahead, I would like to have smaller discussion-based classes, such as the freshman seminar I have been teaching,” he added.

Economics lecturer Thomas H. Baranga, who serves as head section leader for the class, said Mankiw has had an “enormous influence” over the structure of Ec 10 and “frames” the course around his textbook. Students are required to purchase Mankiw’s textbook for $132.

“Ec 10 in many ways reflects his missions of the principles of economics that people should be exposed to in their preliminary class,” Baranga said.

Baranga added that the department has not made any concrete plans to alter the structure of the course after Mankiw’s departure, but that the new course head will likely have some liberty to change the course as they see fit — with the department’s approval.

“Whoever is ultimately going to be course head will have their own opinion about pedagogy and the most effective way to teach undergraduate introductory economics,” Baranga said. “They will be given a lot of support and free range to shape the course that way.”

Mankiw wrote in his email to The Crimson that he told Economics Chair Jeremy C. Stein and Director of Undergraduate Studies Jeffrey A. Miron he intended to leave Ec 10 around a month ago. A committee of senior faculty members in the department began the hunt for Mankiw’s replacement immediately afterwards, according to Miron.

Miron wrote in an email that the committee is working “in consultation with the appropriate Deans” to choose a new head and hopes to make a selection “within a few weeks.”

Baranga said the department is taking the search for a replacement “very seriously.”

“Ec 10 is very much one of the flagship courses of the department,” Baranga said. “They’re concerned to find the best possible people to take the course on for the next 14 or 15 years.”