Feldstein To Hand Over Ec 10 to Mankiw 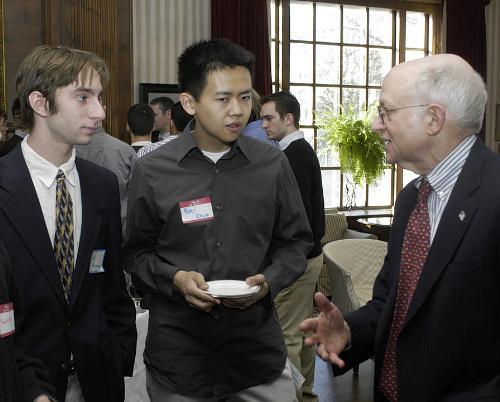 Mankiw, who authored the main course text used in Social Analysis 10, “Principles of Economics,” will return to Harvard this September after nearly two years as chairman of the Council of Economic Advisers.

Neither Mankiw, his colleagues, nor several Ec 10 teaching fellows (TFs) said they expect to see major changes to the course, which is required for economics concentrators.

“I see myself inheriting a successful institution, so my first job is to do no harm,” Mankiw said. “I think changes will be more evolutionary than revolutionary.”

Feldstein, who announced his decision at yesterday’s Ec 10 lecture, will stay at Harvard and continue to teach three other economics courses.

Feldstein and other economics professors said that the decision to leave Ec 10 was strictly his own, and described the change in leadership as a fortuitous coincidence of his own wish to lighten his workload and Mankiw’s return to Harvard.

“I teach a lot,” Feldstein said. “I thought I should give up something. Greg coming back was perfect timing.”

Mankiw said that both Feldstein and Ropes Professor of Political Economy Alberto F. Alesina, chair of the economics department, have approached him in recent months about the possibility of taking over Ec 10.

“Marty’s done a great job,” he said, “but I’ve been waiting for the day that the opportunity would arise” to lead the course.

Some undergraduates got an early opportunity to meet Mankiw yesterday, when he and Feldstein appeared at a Faculty Club party for students who had done exceptionally well in Ec 10 last semester.

One such student was Timothy H. Schmidt ’08, who called Mankiw “a really sharp guy” and “energetic.”

“I think it’s time to give Marty a break,” Schmidt said after the party. “Mankiw’s got a lot of energy he could bring to lecture.”

Mankiw, who sparked controversy last fall after suggesting that outsourcing jobs can benefit the economy, resigned from his post in Washington last month, just before reaching the two-year limit of his faculty sabbatical.

Feldstein—like Mankiw—came to Ec 10 in 1984, fresh from a two-year chairmanship of the Council of Economic Advisors. He also served as former President Ronald Reagan’s chief economic advisor, drawing criticism from inside the administration for stressing the need to stem the budget deficit.

Inheriting the course with an enrollment of 1,072 students, Feldstein eliminated the so-called “radical sections” of Ec 10, in which students learned Marxism alongside traditional economics.

Twenty-one years later, Ec 10’s enrollment has fallen to 625 this semester—still the highest of any undergraduate course.

The decline has been attributed in part to the new introductory economics course taught by Barker Professor of Economics Stephen A. Marglin ’59. The course, Social Analysis 72, “Economics: A Critical Approach,” was first offered in the fall of 2003 after students circulated a petition criticizing Ec 10 for failing to incorporate a liberal point of view.

—Sara E. Polsky contributed to the reporting of this article.