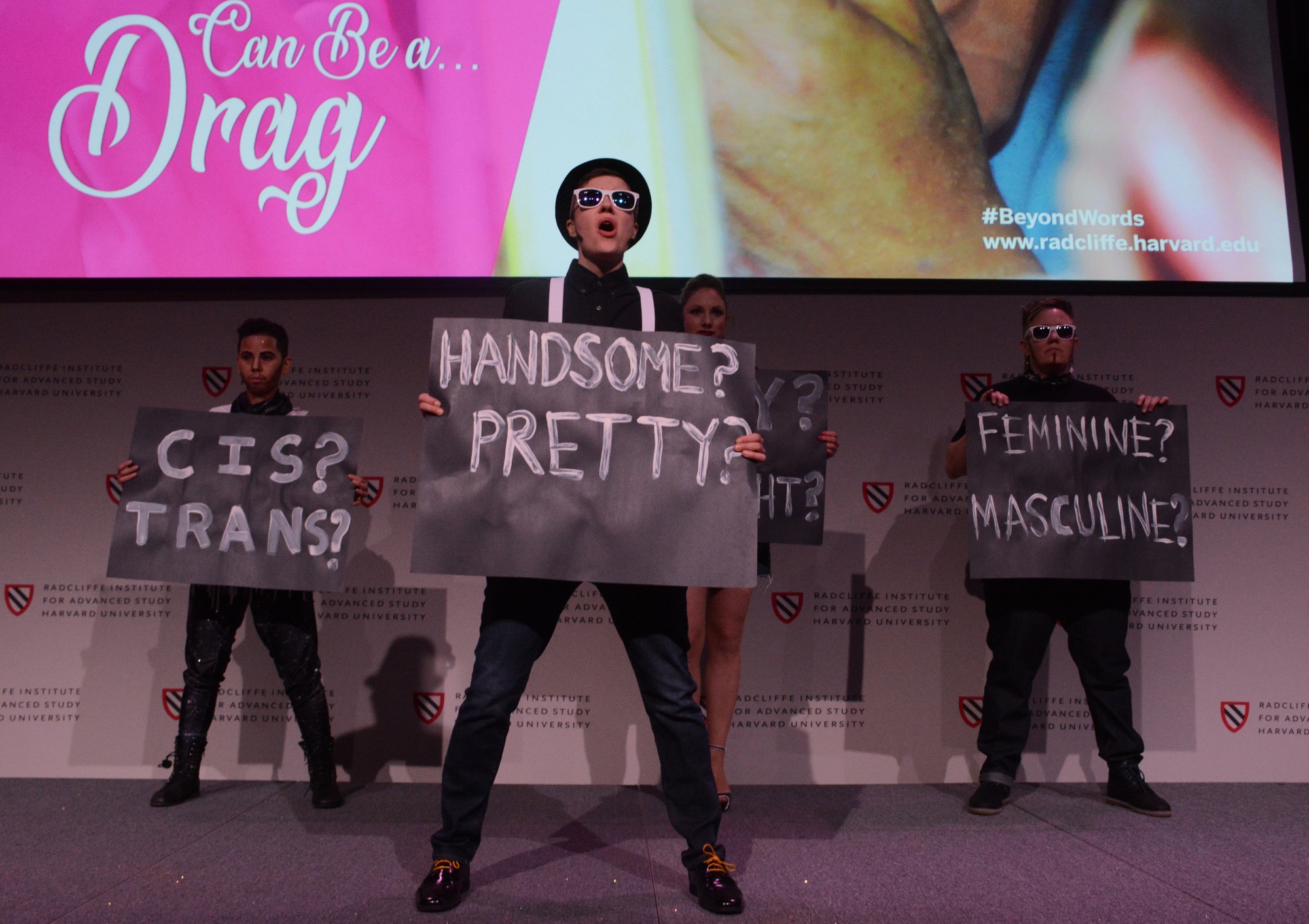 The opening session of the Radcliffe Institute conference “Beyond Words: Gender and the Aesthetics of Communication” included live drag acts.
Advertisement
Advertisement

The Kings and Queens of Radcliffe

The sisters’ film project, six years in the making, emerged from one of Gabrielle Burton’s experiences: She attended a drag show starring her friend’s husband, aka Virginia West, an award-winning drag queen in Columbus, Ohio.
By Mollie S. Ames and Nuriya Saifulina

On the right side of a brightly lit stage in Radcliffe Yard’s Knafel Center, a figure sits cross-legged on a stool. She sports a black-sequined dress and a glossy bob wig, blinking fluttery false lashes that cast a delicate shadow onto her perfectly contoured face. On the left side of the stage, a similarly made-up person poses, grinning, in a black suit.

Just two hours earlier, this elegantly styled drag queen was delivering the opening remarks for the Radcliffe Institute’s “Beyond Words: Gender and the Aesthetics of Communication” conference as Shigehisa Kuriyama, the Director of the Humanities Program at the Radcliffe Institute. After these remarks, the crowd witnessed the live, on-stage transformation of Kuriyama, as well as History Professor Robin Bernstein.

For one night only, the professors volunteered to adopt new personas for the conference’s kickoff, aptly named “Communication Can Be a… Drag.” In addition to these two metamorphoses, the spectacle featured several drag acts and clips from the documentary “Kings, Queens, & In-Betweens.” Jennifer Burton and Gabrielle Burton, two of the five sisters who produced the film, presented at the conference, offering insight into their inspirations and creative process.

The sisters’ film project, six years in the making, emerged from one of Gabrielle Burton’s experiences: She attended a drag show starring her friend’s husband, aka Virginia West, an award-winning drag queen in Columbus, Ohio. At the time, Burton did not expect that a highly creative and supportive drag community could thrive in this small, Midwestern city. “It was this spectacular presentation on stage of all the issues my sisters and I had been thinking about — about how we divide gender into these binaries,” she says. 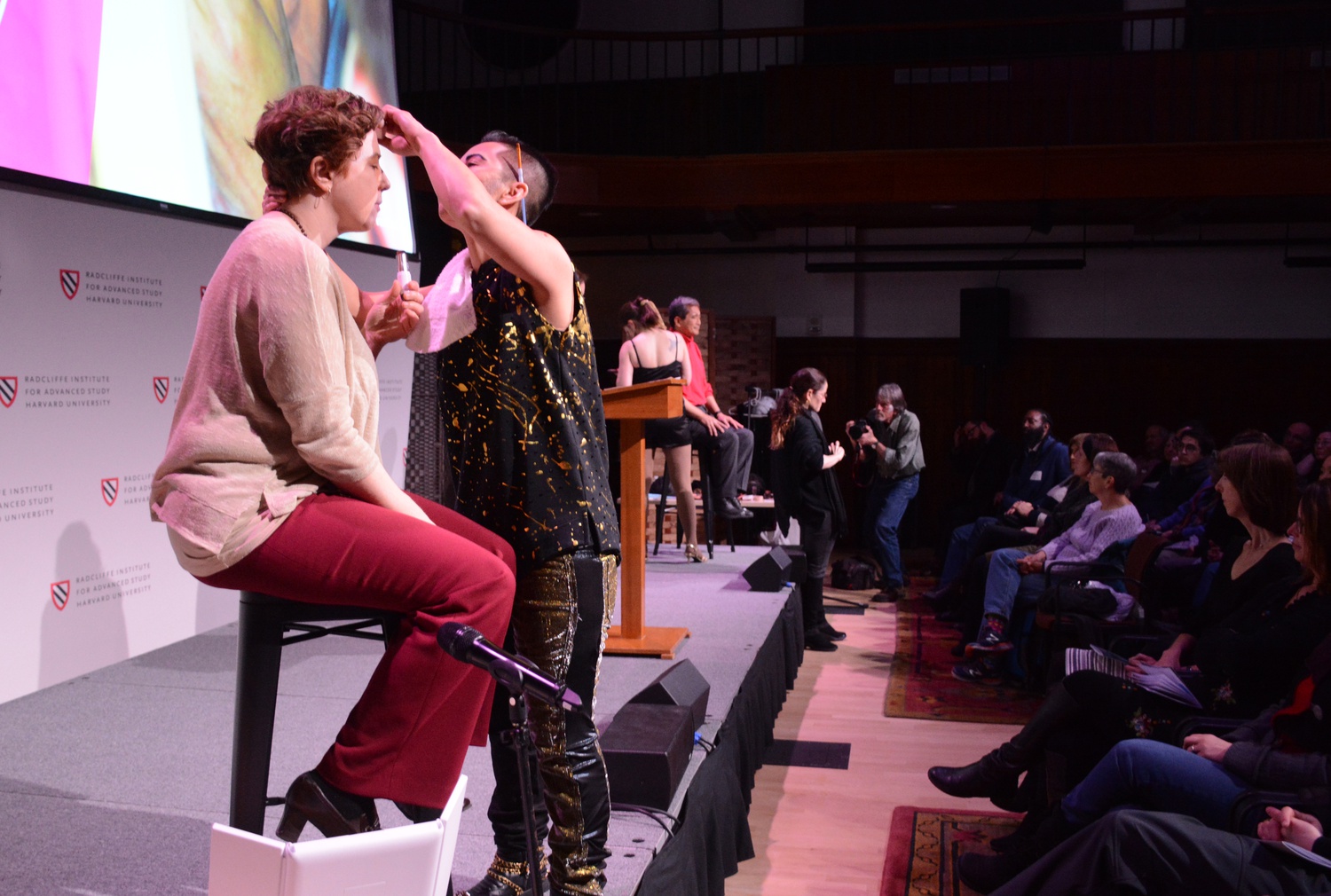 In their film, the Burton sisters hoped to reflect on the universality of gender fluidity. They set out to create “a slice of life film about a community and to use that to then reflect the diversity of our experience as humans,” Gabrielle Burton says.

The Burton sisters have approached gender issues from a variety of angles in their work for Five Sisters Productions, their LA-based production company. In their films—which range from features to shorts to documentaries to fiction—they seek to probe the limitations of traditional constructs. Four of the five sisters each have both a daughter and a son. Gabrielle and Jennifer Burton say that parenting has made them even more attuned to how rigid gender norms arise early in childhood in everything from toys and books to activities and friends. 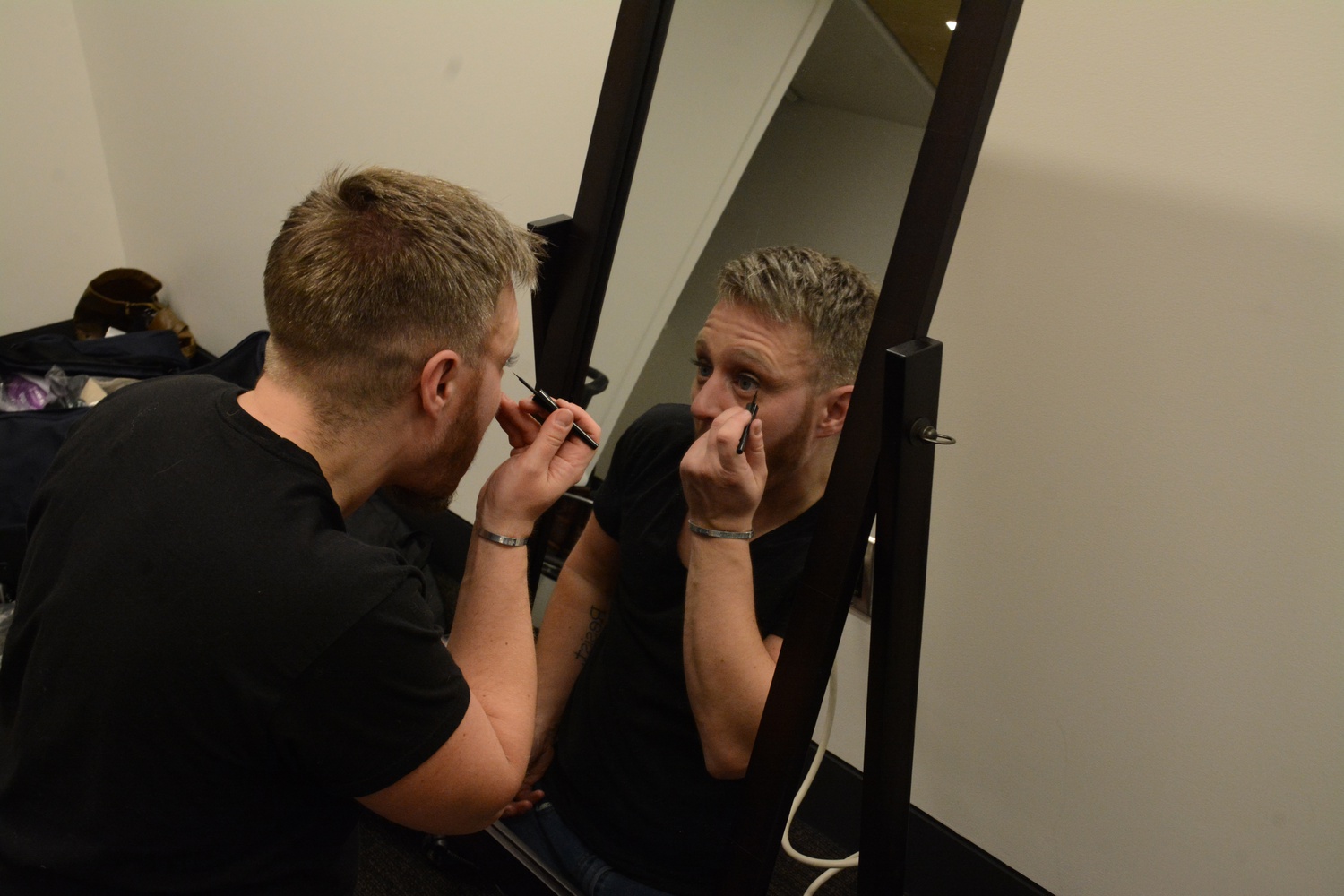 “Often traditional concepts of male and female can really limit us when they’re associated with power, right? So if you think of male behavior being more valued in certain ways or females being valued mostly when they behave in certain traditional ways, it can be very detrimental to people in society,” Jennifer Burton says. “Our event was really a way of opening up a lot of these questions in the very beginning that then reverberate throughout the whole conference.” To Gabrielle Burton, “Communication Can Be a… Drag” provided a fitting and “playful” introduction to a conference meant to examine gender expression.

At the Thursday night event, drag performers confidently stripped off bright orange construction vests to the beat of “We Built This City.” But, previously, many said they once had reservations about doing drag. Rebecca Harrison, aka The Reverend Roy Rogers never expected to do drag professionally. When Harrison’s current troupe of drag kings, The Royal Renegades, asked her to emcee one of their shows, she thought, “I’ll emcee, but there’s no way I’m gonna, like, put hair on my face. There’s no way I’m gonna ever be a performer, but then I threw my hat in the ring, and it was just amazing.”

Similarly, Corey Williams, aka Anisa Love, hesitated to enter the drag world at first. Williams was already a professional dancer and performer for Paramount and Disney. He never regarded drag as a creative outlet but reconsidered after entering a drag competition on a dare and earning his rent in one night. Willliams’s artistic expertise is clear in his drag performances: Anisa Love sashays through the aisles, her crimson lips mouthing the lyrics to “This is Me” from The Greatest Showman as her heavy, jeweled earrings swing to the bass.

For other performers, drag can open up paths for self-discovery. “I grew up female, and I guess I never really felt comfortable being a woman on stage, and it seemed like I was always striving for roles I was never was going to get because I wasn't a guy,” says Ethan K. Balk, aka Dr. Cool Ethan. As a stage performer, he had felt limited by the confined roles women were offered. “I’ve learned so much about gender and the differences between sex and sexuality and all these things, and now I’m able to have conversations with people about that and really help other people around me,” he says. 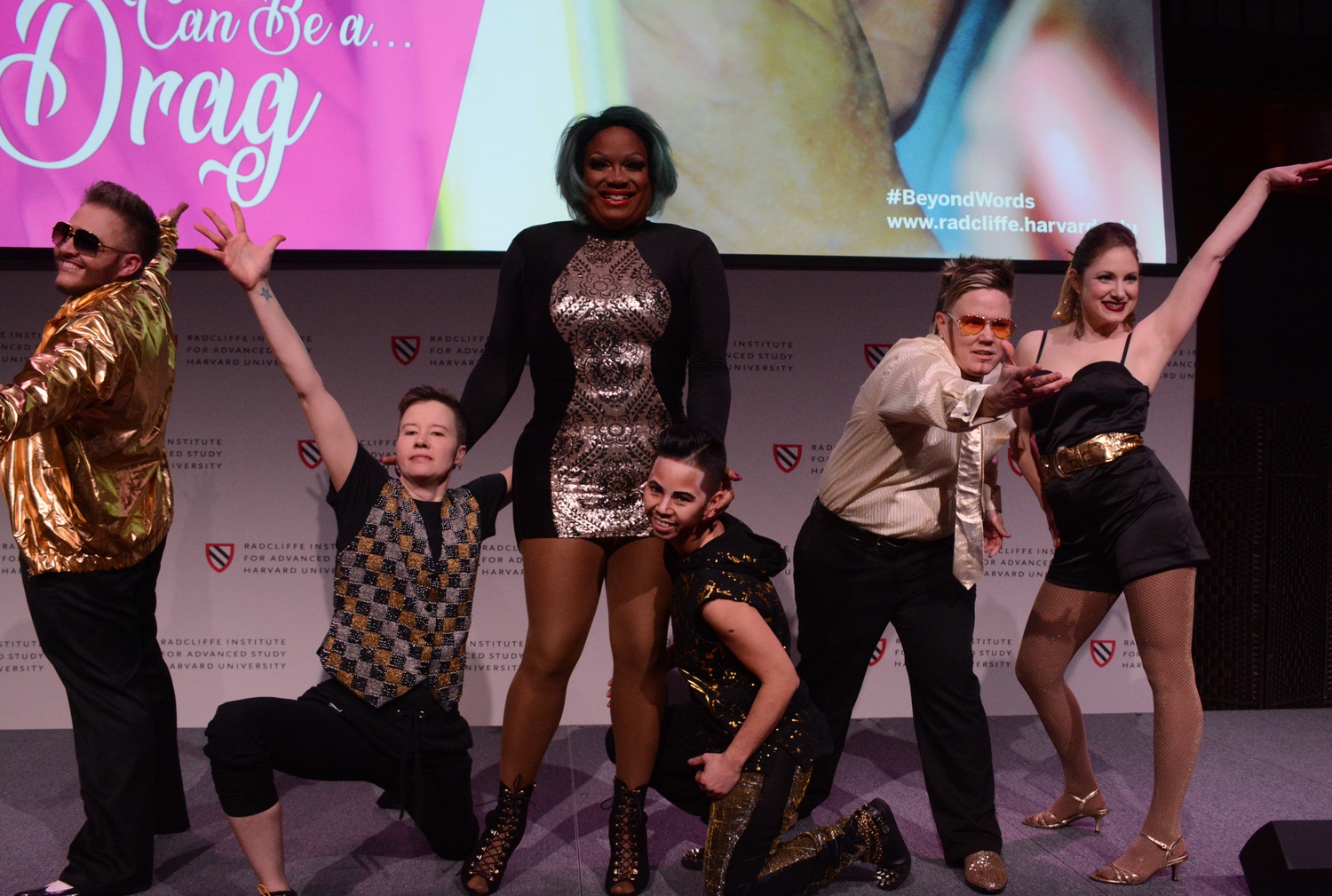 Drag performers from the award-winning documentary, "Kings, Queens, & In-Betweens," put on a show in the Knafel Center. By Nuriya Saifulina

But the impact of drag is not limited to those who perform it. “Whether or not you are a part of the queer community or not, everyone as a whole benefits from drag because what drag does is it pushes the binaries – what is considered masculine and what is considered feminine,” says Quyen Tran, aka Jayden Jameson KA St. James, an award-winning Boston-area drag king and host of public drag transformation workshops. “What we do on stage forces you guys to think about that type of thing.”

Both Tran and the Burtons see the drag stage as empowering to audience members, granting them the space to ask questions of themselves and discover variations of the gender spectrum that they may have never imagined.