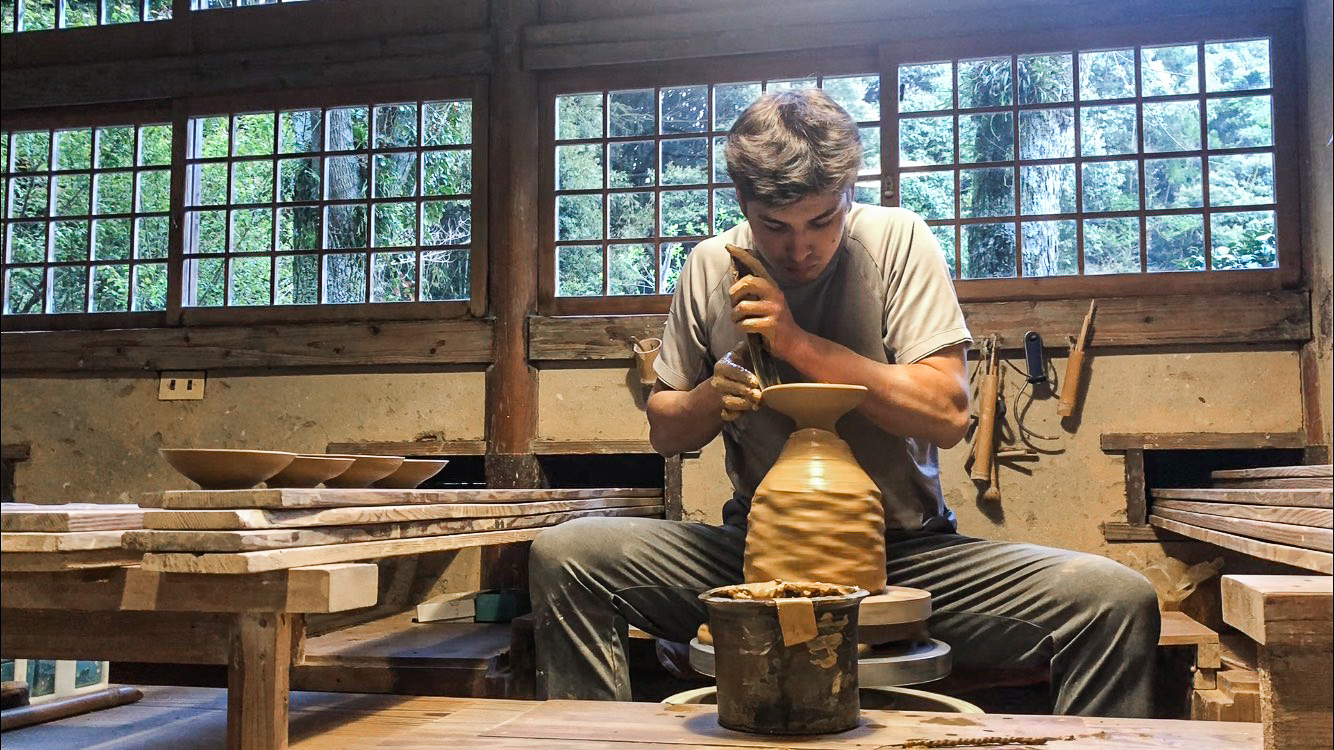 After two years at Harvard, Everard decided to return to Japan to work under master potter Taki Nakazato.
Advertisement
Advertisement

Striving to meet Nakazato’s — and his own — high standards, Everard made more than 5,000 plates during his first six months of apprenticeship. Most were destroyed before they reached the kiln, and their clay was recycled for later use. Every piece that enters the kiln must be perfect.
By Amanda Y. Su and Michael D. Wallace

On a stage at the Harvard Education Portal, Koji A. Everard ’20 sits before a potter’s wheel, patiently crafting a small vase from a lump of clay. A cellist plays beside him.

As the performance reaches its conclusion, Everard reaches beneath the vase with a wire, and in one fluid motion, he splits it cleanly in half. The audience’s rapt attention disintegrates into chaos as he gleefully holds up the remains of the destroyed vase.

That was a year ago, at the opening reception of the 10th annual Harvard Student Art Show. Now, Everard works in a rural pottery workshop in central Japan. He still creates pottery — and he still destroys it.

Everard has spent the last year as an apprentice to the master potter Taki Nakazato, whose family has been working with pottery in the city of Karatsu for fifteen generations. Nakazato and his family produce handmade ceramics for distribution across the world. They specialize in tableware that is both artistic and practical.

“Their technical excellence and skill levels are really unprecedented,” says Everard in a phone call.

Striving to meet Nakazato’s — and his own — high standards, Everard made more than 5,000 plates during his first six months of apprenticeship. Most were destroyed before they reached the kiln, and their clay was recycled for later use. Every piece that enters the kiln must be perfect.

Since beginning his apprenticeship with Nakazato, Everard’s technical skill has grown substantially. “What I thought was my best work, what I believed I loved a year ago, has changed,” he says. “I look back on the things that I used to think were my best work … and I inevitably find flaws where it's lacking in some way or another. ”

Everard’s introduction to pottery began with his grandfather’s East Asian pottery collection. Though he never paid much attention to the collection while living with his grandfather in Tokyo during elementary school, he says that being around it kindled a “subconscious interest” in pottery.

He began to pursue this interest in high school, when he enrolled in an introductory arts course that largely focused on using a potter’s wheel. Even though he only took that first course to fulfill a graduation requirement, he enjoyed it so much that he continued with successive courses each year. Eventually, he pursued an independent study project in pottery.

“I find that when everything's clicking, and I'm on the wheel, and I'm really producing work more efficiently than I could before or smoother than before, that feeling is really sublime,” Everard says. “It's about how it makes me feel. It's not really about what I produce.”

Before he came to Harvard, Everard’s mother suggested he take a gap year to learn how to make Japanese pottery. He researched six prominent kilns in central Japan, each with a history reaching back to the 12th century. He wrote letters to the regional pottery guilds that oversaw the kilns, relying on his grandfather to vouch for his talent. He ultimately drew the attention of a few guilds and travelled to Japan to visit them. 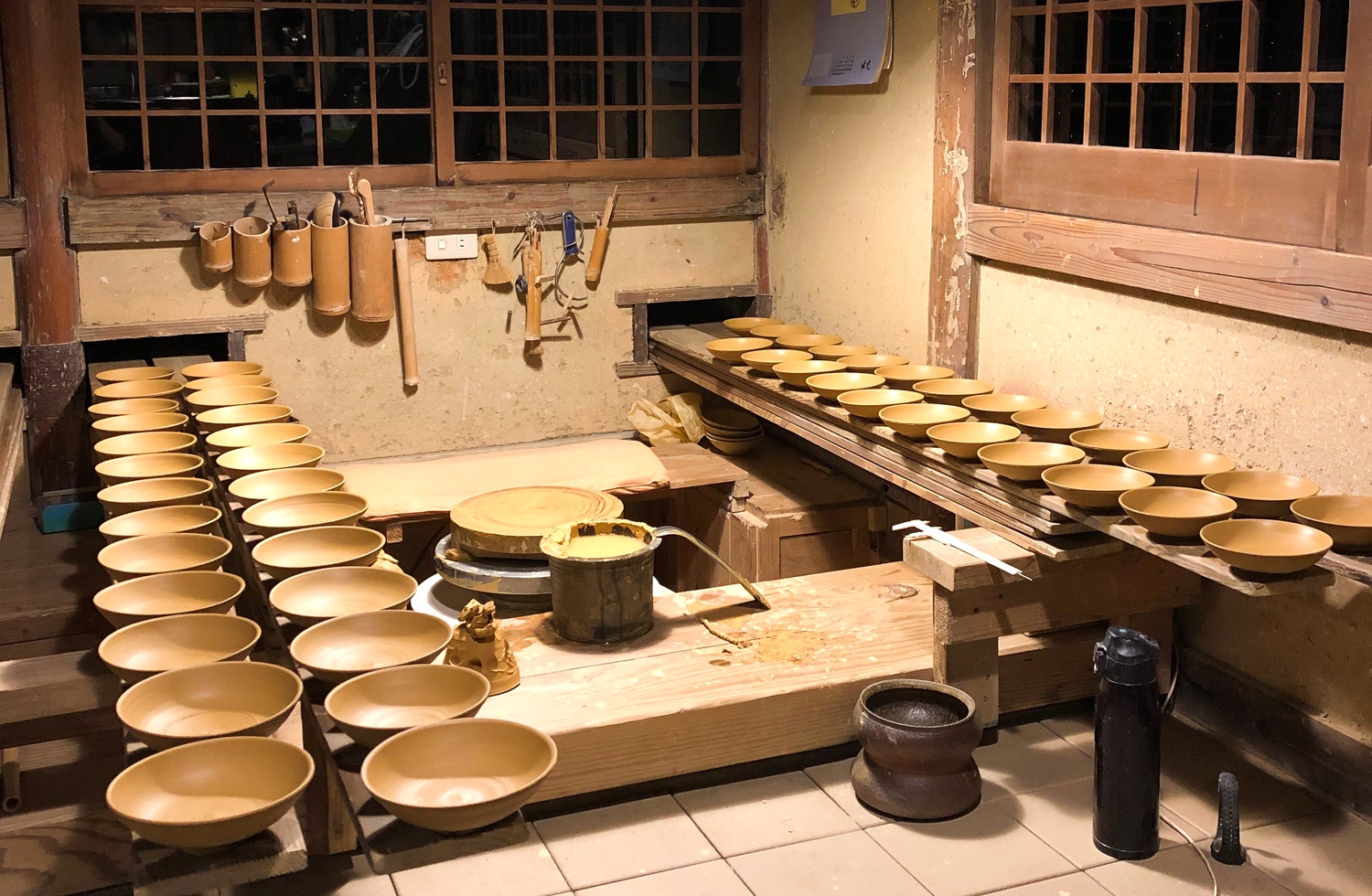 Everard made over 5,000 plates during his first six months of apprenticeship. By Courtesy of Koji Everard

Shortly after graduating from high school, Everard began to work with a potter in the city of Tamba, Japan.

“For me, it wasn't really like an apprentice-teacher relationship,” he says. “I was there to just learn. I wasn't being paid. I was more his friend than anything.”

After two years at Harvard, Everard decided to return to Japan to work under Nakazato. But he quickly realized that this apprenticeship would be nothing like his gap year in Tamba.

Now, training alongside another apprentice, Everard follows the strict curriculum of the Nakazato family. He begins a typical day at 7:45 a.m., preparing and cleaning the studio. Throughout the rest of the day, his jobs include glazing, cutting grass, procuring and processing clay, and chopping wood for the kilns — by his count, 12 tons of wood so far.

“Sometimes, I think it’s work a non-sentient being could do. Just hire a monkey, honestly,” he jokes. “But it is rewarding in a very different way. It's very different from doing a p-set or turning in a paper. You really see the result of your labor before your eyes.”

Everard finds creative ways to differentiate himself from a hired monkey. While cutting wood for five hours straight several days ago, he says he ruminated on the opening line of Leo Tolstoy’s Anna Karenina: “All happy families are alike; each unhappy family is unhappy in its own way.”

At 5:30 p.m., Everard finally sits down at the potter’s wheel. Before his apprenticeship with Nakazato, he enjoyed creating tall, elaborate vases. In the first six months of his apprenticeship, however, he spent every day making plates. By the end of the six months, he was allowed to fire only 90 of those plates in the Nakazato kiln.

Through his apprenticeship, Everard has also internalized Nakazato’s “waste not, want not” philosophy.

“I broke a brush once because I just handled it too strongly — but the brush was 10 years old, it was going to break anyway,” he says. “And then I told the other apprentice, ‘Hey, this brush broke. Can we just buy a new one?’ And he's like, ‘No, we’ve got to fix that before the sensei notices or we’ll get in trouble.’ Okay, shit, how do you fix this?”

This philosophy also extends to Everard’s recycling of clay. Because the Nakazato family makes all of its clay from scratch, every ounce is valuable. “Most studios in the U.S. … you buy your own clay, but here we don't buy clay. We have a huge amount stockpiled that we've gathered over the years,” he says. “We literally take rocks that we dug, and we process that into clay, which requires several different machines and a lot of labor.”

Everard will carry these philosophies back with him when he returns to Harvard in the fall. He plans to continue his involvement in the Ceramics Program at the Office for the Arts, but he is unsure of where pottery will take him after he graduates.

“I'd like to do it my entire life,” he says. “It's something you can do at any age, as long as you can move your hands, basically. There's no real age limit to it, which is really something that's beautiful about it.”

“I feel very fortunate that I found something that gives me so much joy at this young of an age.”