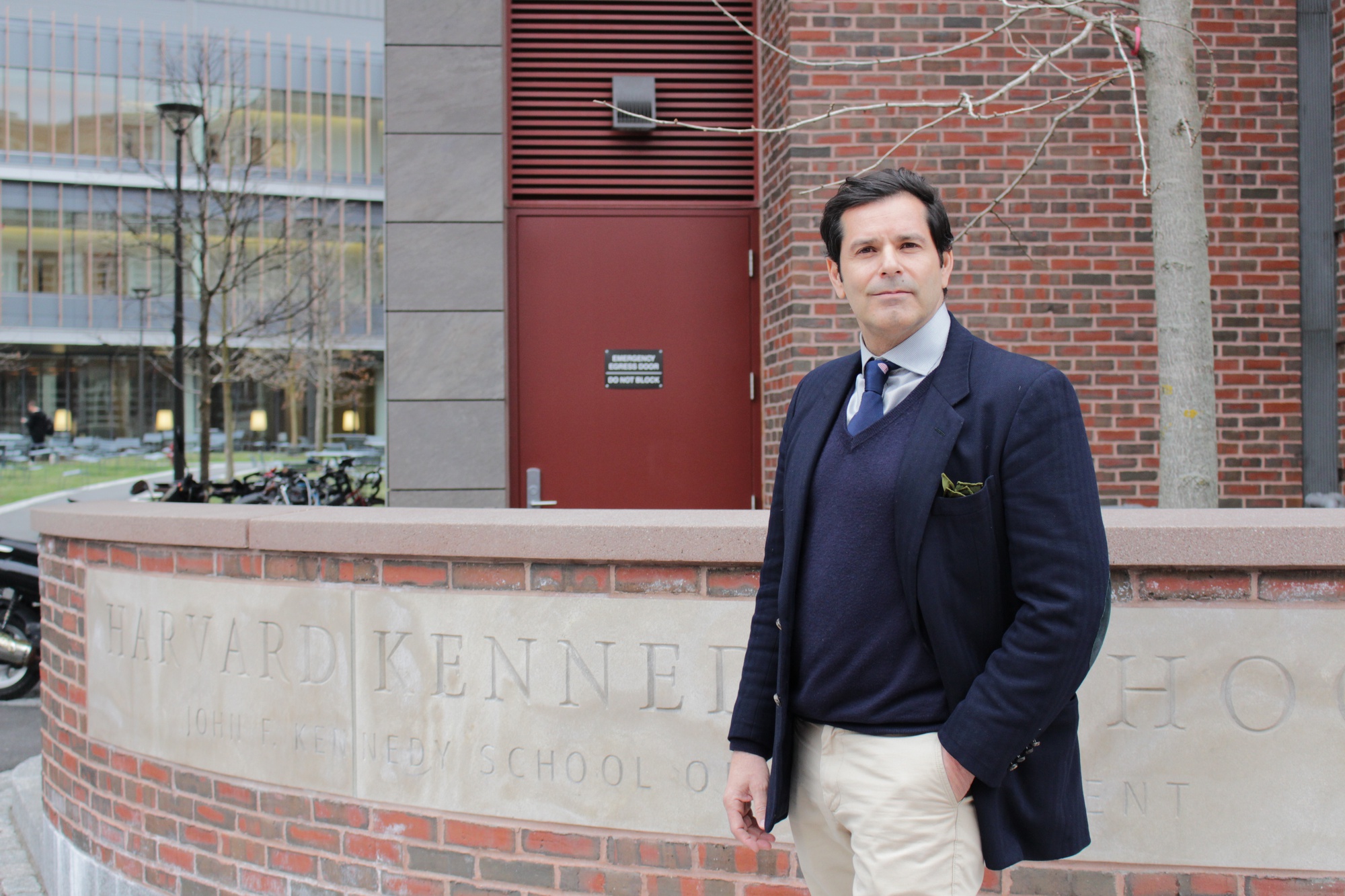 Surfer, Monk, Diplomat: The Odyssey of Isaias A. Medina III

“I've wanted to change the world since I can remember,” he informs us. “This is something printed in my heart.”
By Chloë F. LeStage and Kainoa S. K. Lowman

“Let me tell you something to begin with: I’m an idealist.”

That’s how Isaias A. Medina III begins the conversation. “I’m a dreamer, man,” he adds.

Medina, a 53-year-old lawyer, is also a kite-surfing instructor, Vaishnava monk, former Venezuelan diplomat to the United Nations, and current Mason Fellow at the Kennedy School.

“I've wanted to change the world since I can remember,” he informs us. “This is something printed in my heart.”

In late 2016, he was told, over Friday afternoon drinks at the UN delegate lounge, that he was

“Harvard material.” A colleague and diplomat from Cyprus told him about a Harvard program she had completed, the Mid-Career Master in Public Administration Edward S. Mason Program at the Harvard Kennedy School. He decided to apply.

“I did my essays that whole weekend,” he said, “just locked myself in my apartment, let my dreams out.”

Fast forward to early 2017: The situation in Venezuela under Nicolás Maduro was becoming a humanitarian crisis. Medina, awaiting his acceptance from the Kennedy School, watched from the UN Headquarters in New York as his country fell apart. Police murdered student protestors, people died of starvation and illness, and his delegation sided with Maduro.

For Medina, the situation forced a reckoning. “I just had to draw the line in cement,” he says.

Medina resigned from his position on June 14, 2017, two months after his acceptance to the Kennedy School, and promptly began receiving death threats. He deferred his enrollment for a year to advocate for intervention in Venezuela full-time from his New York apartment. He was eventually granted political asylum in the U.S., which has allowed him to stay here since leaving the UN.

“I wanted to go home with these guys and fight in the streets, but I understood that my place was to be the voice of the voiceless Venezuelans for the international community … and I became that.”

Medina did 120 interviews with the press about the crisis in Venezuela in the first three months after he resigned.

He enrolled at the Kennedy Schoollast summer. The Mason Fellows are politicians, educators, entrepreneurs, and military service people from 60 developing countries, and they make up half of the 250-person class of the Mid-Career Master program. Medina says that his experience among the Mason Fellows has, thus far, mirrored much of what he loved about the UN.

“At the UN, we had meetings every hour and a half on completely different issues. You would go from climate change to diplomatic immunity to the ICC. And then I was doing security council. It was amazing; there were 50 different agenda items, so that is like [the Kennedy] to me.”

On the Tuesday of our interview, Medina’s Kennedy Schoolschedule was similarly packed and motley: he went from IGA 220: “The Politics and Ethics of the Use of Force,” taught by J. Bryan Hehir, to Douglas Johnson’s IGA 388: “Nonviolent Resistance in the Age of Authoritarians,”’ and then ended the day with a simulation of a negotiation in leadership for environmental conflicts. He says he hopes to apply what he learns here to situations back home –– if, someday, he is able to return to Venezuela. In the meantime, he is looking to create change from Harvard’s campus.

While in Cambridge, Medina is occupied with much more than his classes. In 2019 alone, he’s taken leadership roles with Tactical Governance LLC, a policy consulting firm advertising broad expertise, and Lazarus Institute, a think tank focused on “the maintenance of peace and security, and the resurrection of democracy, justice, and freedom in Latin America,” as he describes it.

Medina also serves as president of We Care 2030, an environmental advocacy group. “Together, we will be the trend setters of clean environments and vital ecosystems that will provide a healthy future for generations to come,” proclaims We Care’s website in bold, capitalized print. It lists seventeen goals to be achieved by the year 2030, many of which — “no poverty,” “zero hunger,” and “gender equality” — are not related to the environment.

Medina does have a strictly -environmental pet project, an early stage app called the Earth Club, which awards its users credit for environmentally -friendly behavior.

“[When] responsible consumers are responsible producers,” he says, the effect is revelatory. “Boom! You change the world immediately.”

“We need to change the economy in order to change the world. Today, what's rewarded is to accumulate money, which is paper. What's money gonna be worth if we don't have a world to live in?” 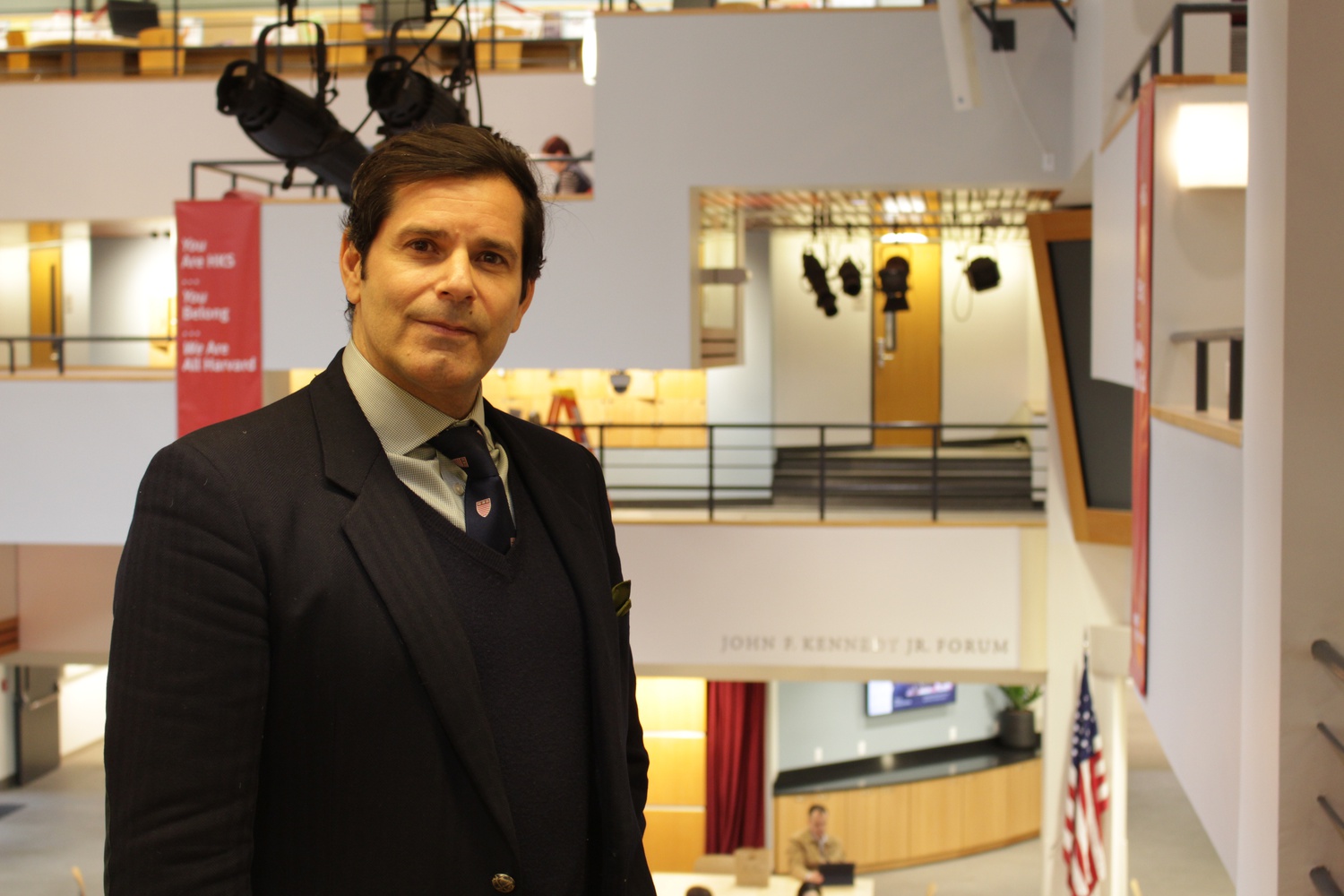 Medina was formerly a Venezuelan diplomat to the United Nations. By Ryan N. Gajarawala

The third Isaias Medina attended a Canadian boarding school, returned to Venezuela for college and law school, and then began a career in the private sector. He worked as legal counsel for Corporacion Venezolana de Guyana as it privatized Venezuela’s aluminum industry, and later served as a foreign associate at Gibson, Dunn, and Crutcher LLP, a corporate law firm on New York City’s Park Avenue.

Medina had aspirations of making partner there, but that changed, he says, when his father passed away.

So Medina left corporate life for a 15-year-long world tour.

From 2001 to 2007, he resided in Venezuela, California, and India –– “following my heart and my spiritual master, Srila Govina Maharaj” as a Vaishnava disciple. Now, Medina practices Buddhism.

Then, he traveled to Margarita Island, north of the Venezuelan mainland, and began the next phase of his career.

Kite-surfing quickly became his new passion. “The kite's name was ‘Inferno.’ Can you imagine the speed? I learned for the first time, and I became an instructor.”

He stayed on Margarita Island until 2009, when Medina, as he tells it, “fell in love with the island next door, which was called Isla de Coche.” He left kite-surfing behind and hopped one island over to begin building a holistic hotel, until the deteriorating political situation in Venezuela delayed construction.

“And then I moved to Costa Rica: same thing, man.” He lived on a turtle reserve with no running water or electricity, where he would go every day to collect freshly laid turtle eggs and bring them inside to hatch. “They'd be born, then you take them back. It was beautiful.”

He also led eco-tours, surfed, and ran a vegetarian restaurant in Playa Hermosa. When that got old, he moved to another island, Cubagua, where he lived amongst the island’s other inhabitants –– seven fishermen –– and slept in a hammock.

It wasn’t until 2015 that Medina returned to the mainland. Back in Venezuela, his mother’s friend, Justice Hildegard Rondon de Sanso, offered him a position in the country’s UN delegation over breakfast. Medina surprised the judge with his “long hair, earrings, tattoos. I came [there] in my flip flops!”

Nevertheless, his experience secured him the job, and he was ready for the next chapter of his odyssey, excited as ever.

“I’m gonna keep doing what I’m doing,” he promises. “Fighting the good fight, speaking for the voiceless, bringing about change.”