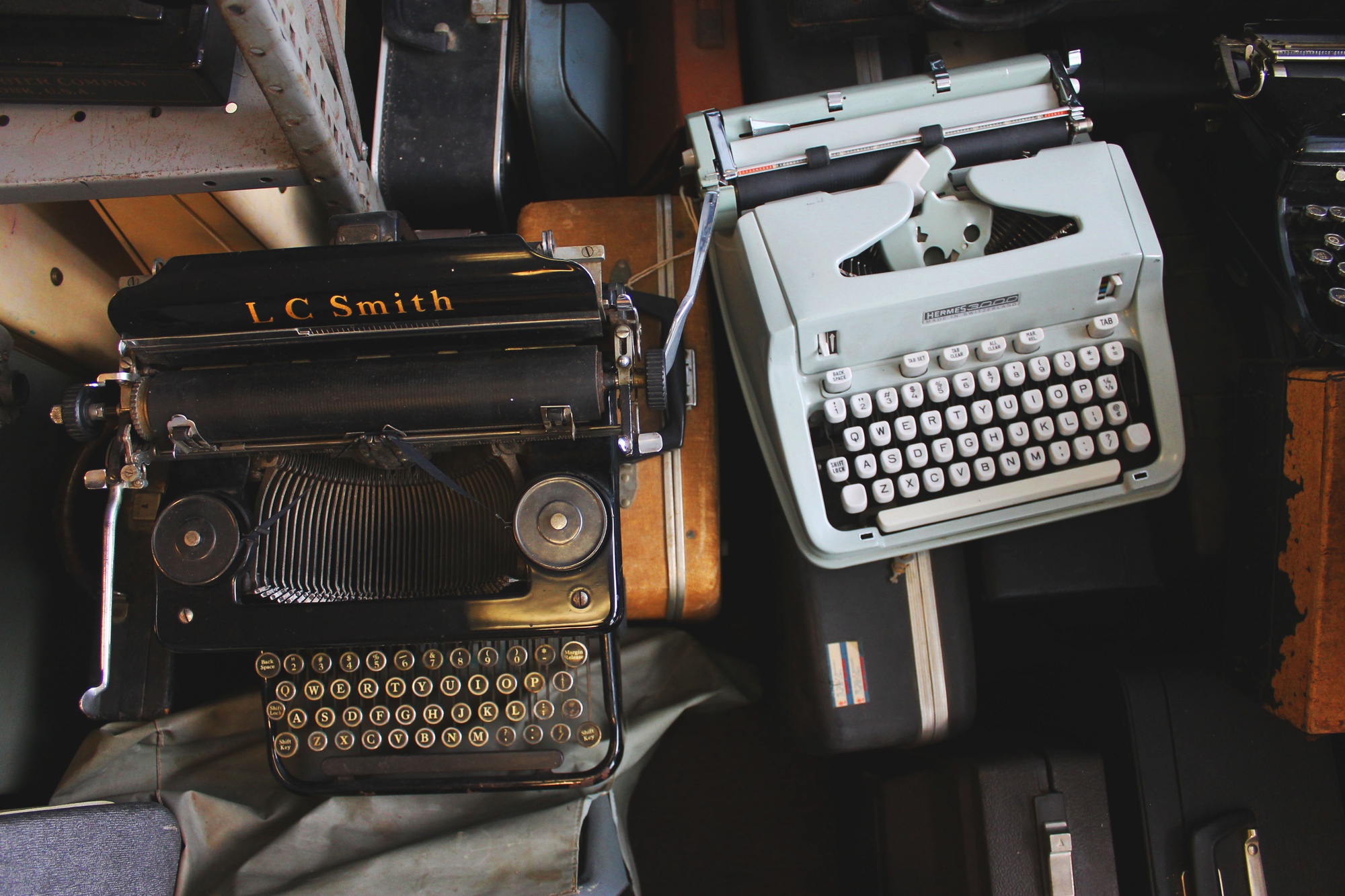 A blue Hermes 3000 and a black LC Smith sit in Cambridge Typewriter Company waiting to be repaired.
Advertisement
Advertisement

“People just come in — sometimes not to buy anything,” explains Thomas J. Furrier, owner of Cambridge Typewriter Company. “They love typewriters — to talk about them, try them.”
By William C. Swett

Though the shop was empty when I visited, I couldn’t help but imagine the clickety clack of hundreds of keys as visitors tried out different models. The shop’s interior resembles a library reading room, though with typewriters instead of books. The bulky machines fill every available space, even covering parts of the floor in a clutter of metal.

“People just come in — sometimes not to buy anything,” Furrier explains. “They love typewriters — to talk about them, try them.”

Furrier started work at the shop in 1980 as one of four typewriter technicians. Furrier recalls that at that time “there were typewriter shops galore in this area.” That all changed at the end of the 1980s, when he began to notice a significant number of closures. Then, in 1990, his boss decided to retire. Furrier decided to buy the business, moving the shop from Cambridge to Arlington to save on rent. “Everyone thought I was crazy buying [it],” he says. But despite the discouraging comments, he remembers, “I just felt like I could do it.”

The late 1990s were not easy for Furrier: The shop almost went out of business twice. In 1999, he was a month away from closing. He remembers telling people, “I’m done, I’m gonna call the landlord.”

But business suddenly started to pick up in the early 2000s. Groups of high school students started to frequent his shop, and he began to feel optimistic. Furrier remembers thinking, “I’m gonna hang in there and see if something happens.” And he was right. “Very quickly I could tell that there was a new direction for young people that was gonna get into typing — it was a vintage comeback type of thing,” he says. By 2009, business was better than ever. “It almost became a mainstream thing.”

Customers under 30, who had grown up with iPhones and laptops, drove business. Furrier attributes Millenial and Generation Z interest to the “sensory feedback” one gets from hitting a typewriter key.

Today, Furrier receives visitors from all over the country. “We had a woman visiting from Northern California. She was here with her husband on business, and it was her main thing to come here — she’s a typewriter fanatic. She came in and spent the entire morning,” Furrier says.

Though hipsters and nostalgics keep the business thriving, there remains a strong contingent of people who never stopped using typewriters.

Among those is author David McCullough, who first brought his typewriter in to be repaired about four years ago. Furrier still remembers the day he first handled McCullough’s typewriter: “I’m carrying the thing, I’m cradling it, I’m walking baby steps. I’m afraid to drop it, you know, kill his mojo, but I got over that.”

Furrier’s customers include Harvard affiliates. Jill Lepore, an American History professor, and Leah Price, an English professor, spent several hours in the shop to purchase typewriters for their class on the history of recording devices. “They spent a couple of hours on the floor going through a pile of about one hundred machines up front and having the best time,” Furrier recalls.

Typewriters of past fame have also found their way into the shop. Furrier used to have two typewriters owned by the poet and winner of the first Pulitzer Prize in Correspondence, Paul Scott Mowrer, but he sold them to aspiring poets. “I specifically wanted to sell them to a young poet and tell them the story of who owned the machine for inspiration,” Furrier says. 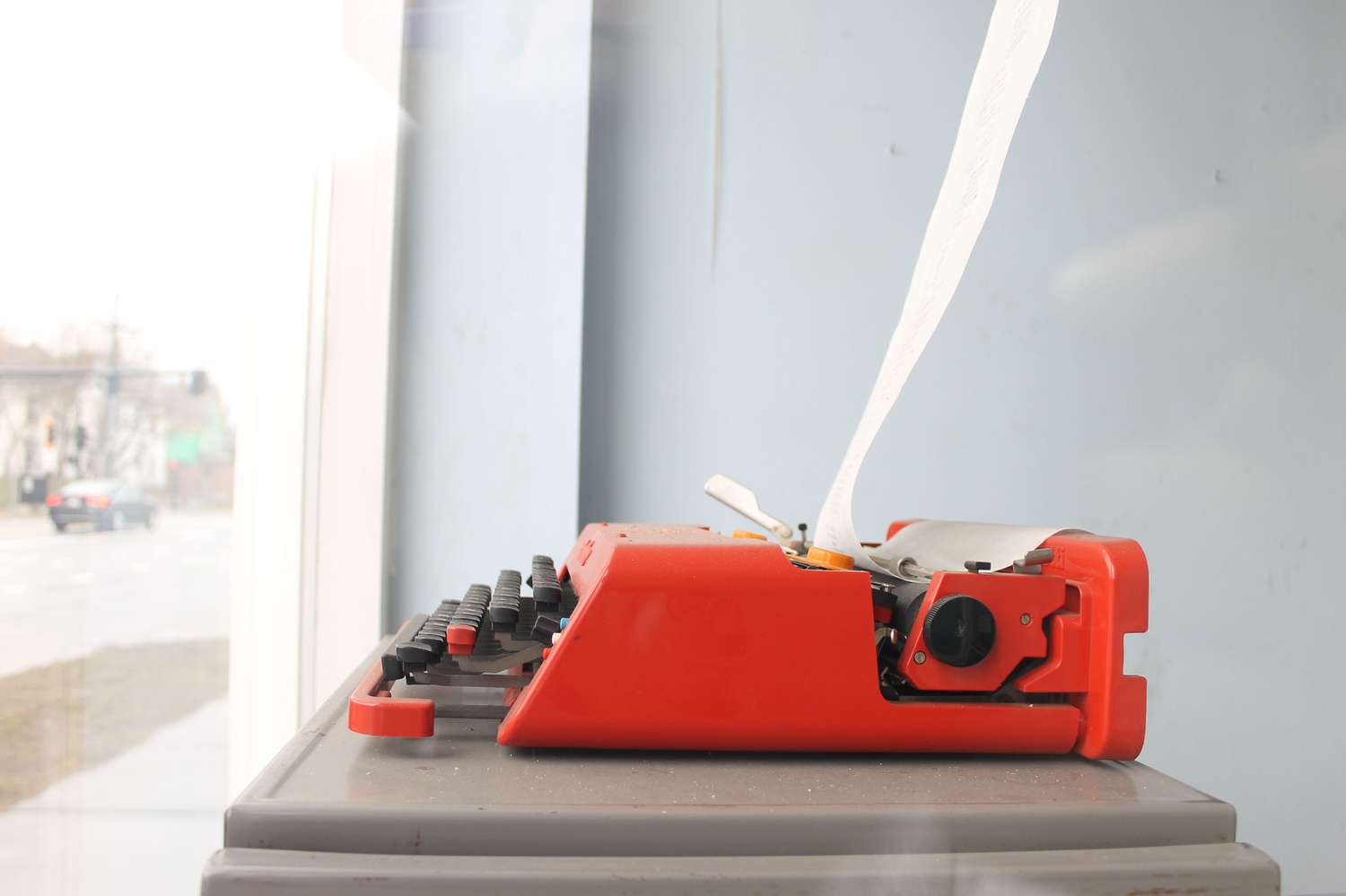 A red Valentine typewriter watches over Massachusetts Ave from the window of Cambridge Typewriter Company in Arlington, Massachusetts. By Rachel D. Levy

Artists are not the only factor bolstering Furrier’s business. “Downtown, a lot of companies still use typewriters,” says Furrier. These aren’t vintage typewriters, and they aren’t always there just for convenience. Law offices never stopped using typewriters. While all hospital forms have been fully digitized, Furrier claims that many legal forms are still typewritten.

Eventually, Furrier accumulated so many stories about typewriters that he began a blog. In over one hundred blog posts (all typewritten, scanned, and then uploaded online), Furrier describes everything from typewriter ribbons to local authors who use his typewriters.

But he refuses the label of writer. “I’m a typewriter technician repairman,” Furrier clarifies with a grin. “I still think of us here as just a local neighborhood repair shop even though we’re a much bigger footprint.”

When I first visited the shop, I was unsure why such heavy and expensive pieces of equipment were so popular. Furrier claims that Tom Hanks once said, “You shouldn’t pay more than $50 for a typewriter in the wild.” Prices in Furrier’s shop begin just below $300 — well above thrift store prices.

But then I began typing on one of the machines, and found myself unable to stop. Each model gives a different amount of resistance. The keys are active, like the strings on a violin: Apply too much pressure, and the key gets stuck, but apply too little and only the faintest blot of ink is left on the demo piece of paper.

“Part of it is just getting back to an old school thing — slowing down, shutting out all the noise from the digital this, that, and everything,” Furrier explains. “A typewriter is just one thing that gets people to slow down, slow their brain down, and relax, and enjoy.”