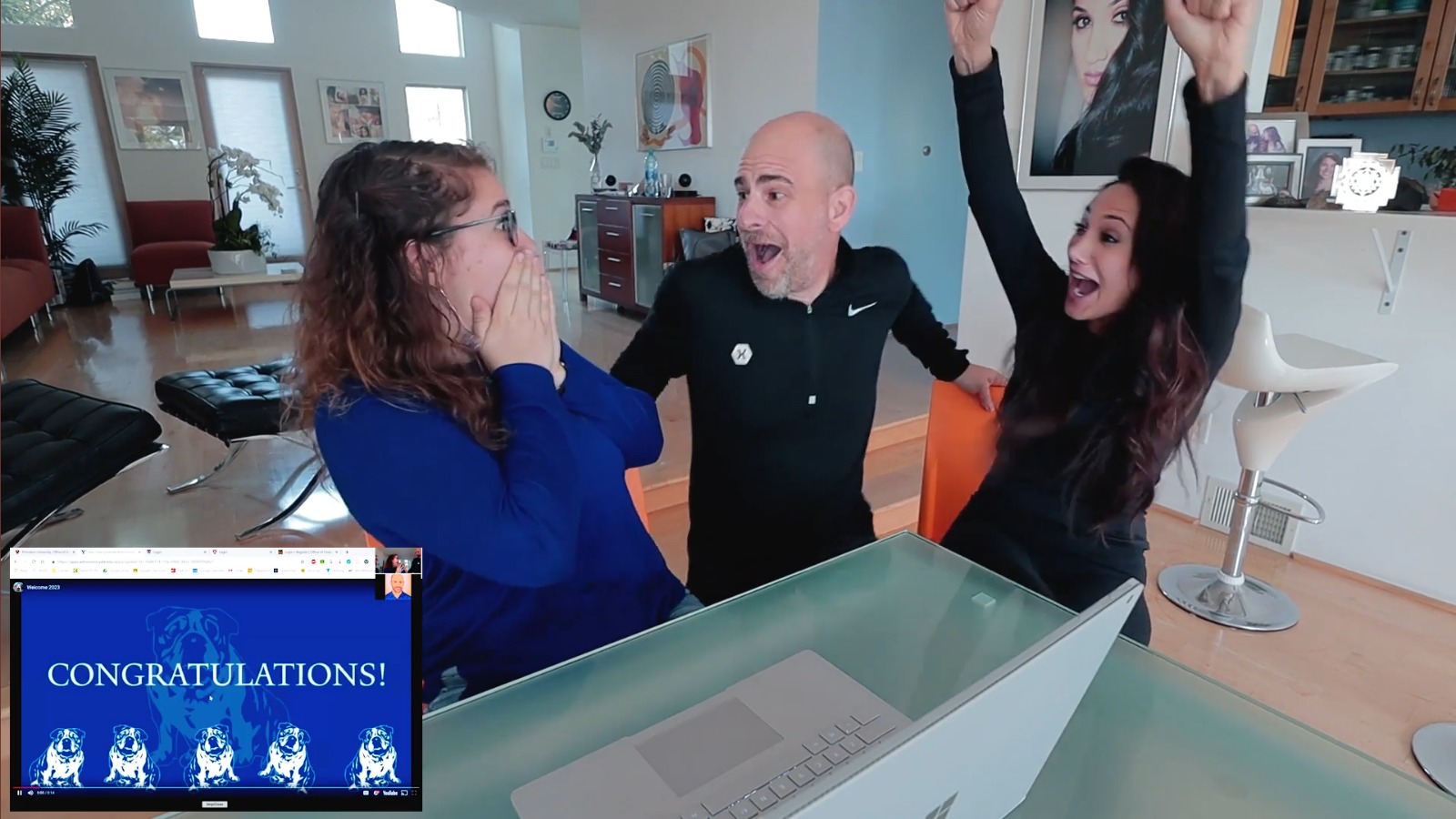 Hannah Morrison, who was waitlisted for Harvard University's Class of 2023, posted a video on her Youtube page about her college acceptances.
Advertisement
Advertisement

“I’m about to get rejected three times in a row. Which is, just so you know, really hard to take.”
By Jensen E. Davis

Right before Ella J. Biehn opens her University of Georgia admissions letter on November 16, 2018, she looks down at her camera and tells her future YouTube viewers, “I just got back from a Latin Club meeting.” The camera focuses on her as she opens her online admissions decision letter, and, after her eyes quickly scan the screen, she reads it aloud: “Congratulations on your admission to University of Georgia!”

Four months later, on March 28, after opening eight other admissions letters on camera, Biehn sits at a desk and tells her viewers “it’s Ivy day.” She rests her hands together in a prayer position as she tells the camera “I’m about to get rejected three times in a row. Which is, just so you know, really hard to take.” Of the three letters she opens that day, from Harvard, Brown, and Tufts, she opens Harvard’s first. She starts shaking her head and says, “alright guys, rejected from Harvard.” She grabs her face as she tells the camera she’s rejected from Brown and Tufts too.

Between November and March, Biehn filmed herself opening 13 admissions letters from various colleges and universities and, once she opened them all, edited the video into an 11-minute compilation of all her reactions. Though Biehn has only 61 subscribers, this video — the only one on her channel — has 11,732 views.

It’s impossible to pinpoint the origin of the “college decisions reaction” genre, but the earliest of these videos available on YouTube dates back to 2011. That year, only two were uploaded. This past week alone, more than 35 were uploaded to YouTube. In some of these videos, students are surrounded by family and friends as they open the letter; in others, students open them alone. Regardless of their in-person audience, many students address their generic future YouTube viewers, explaining the intimate experiences of the college admissions process.

Biehn says her imagined audience “made it a lot more bearable to do, like, something that’s really nerve-wracking.”

“When you’re reacting for an audience, you’re performing a little bit,” she explains over Skype. Biehn confesses that she edited out portions of her reactions to rejection letters, and she also didn’t show the finished video to her family. “I don’t know if [my family] would be interested in it,” she says. “I think it’s almost made for an audience, and not for people who know me.”

Biehn, who has since committed to Wesleyan University, decided to film and post her admissions reactions because she had enjoyed watching them throughout her own college application process. “I found that it was really entertaining and also made me feel better about the whole process, to see other people going through the same thing,” she says. “I think it’s really helpful for people to see that things don’t always work out the way you think they’re going to. That’s okay, that’s just how it is. Other people are living through that reality.”

Like Biehn, John A. Kubinec started watching these videos when he was stressed about college applications during high school. When it came time for him to open his own letters, he knew he wanted to record and post a video like the ones he loved to watch.

In his video, posted this month, his reactions are subdued. He stands by his kitchen table, surrounded by his mother, his father, and, via Facetime, his brother. When he opens his Harvard letter, he picks at his mustache and calmly says, “Oh dang it, I got rejected.” Then, Princeton: “They cannot admit me to Princeton. Man, oh for three!” When he opens the last of five letters, from Cornell, he throws his hands into the air and screams “Ayyyy we got in!” His parents clap their hands over their heads and give him huge hugs. The video isn’t as overtly emotional as some — there are no tears or collapsing onto the floor — but, still, it has 43,337 views and counting. The premise of the video promises drama to the audience, and Kubinec’s four consecutive rejections deliver. But the allure of the video isn’t simply theatrics.

Over Skype, Kubinec explained that, when students look at colleges online and scroll through the Internet for admissions information, “we see five percent acceptance, ten percent acceptance. They’re just numbers to us.” On the popular websites College Confidential and Niche, the students admitted to Harvard are consolidated into one average high school GPA and acceptance rate. On Naviance, an advising website some high schools use, students can abstract themselves into a data point and place themselves on a graph — SAT score on the y-axis, GPA on the x-axis — to calculate their chances of getting accepted to a specific college. Red, green, and blue dots on the graph represent prior applicants from the same high school who were rejected, accepted, or waitlisted, respectively. Reaction videos allow anxious high schoolers to look at actual faces who have experienced the college application process, rather than simply stacking their data point against the statistics of years past.

As Abby Ohlheiser recently wrote in the Washington Post, these videos present authentic accounts of how students celebrate and grieve. They capture the reality of the College Process, like a crossover between shaky home-movie footage and a Bravo reality TV show. But, more than just presenting the reality of college admissions — the excitement of getting accepted and, more often, the banality of rejection — the personal anecdotes in these videos help many navigate the drawn-out, mysterious process.

“With schools people are generally really curious about — like Harvard, Yale, Stanford — people want to know people that get into those schools, because it’s such a small percent,” explains Hannah S. Morrison, who uploaded her own admissions reaction video this spring. This fascination with elite universities is evident in Morrison’s views. The four music-related videos previously uploaded to her channel garnered about 1,000 views each, while her reaction video, entitled “College Decision Reactions (Yale, Harvard, Georgetown, UPenn, UChicago, Princeton, etc.),” reached 155,069 views in three weeks.

Morrison explains that, to some extent, she’s surprised that her own video attracted so many views. But, as someone who endlessly watched admissions reactions throughout high school, she knew that such videos often went viral. “A lot of people in the college application process, even if they’re applying to not those schools specifically, want to know who gets in. It’s an insider thing.”

Personalizing the statistics of admissions allows applicants to imagine colleges as real places populated with real students — potentially students like themselves. “[Reaction videos] were opening an almost unreachable gateway to these high level elite schools that you hear about but you don’t know much about,” says Christine Lee, a high school senior who has committed to Harvard. Throughout high school, Lee was “obsessed” with college reaction videos and videos about college life in general. As she applied to college herself, she watched reaction videos because “seeing that it was a culmination of their hard work kind of gave me the encouragement to continue with my own high school career and really strive towards getting that moment for myself.” Because of these personal clips, she could imagine herself at schools that seem to exist only on glossy brochures.

In an email, Kubinec clarified that “college admissions YouTubers are important because the college application process disproportionately favors students with good guidance counselors or parents who can afford online admissions counselors.” Through YouTube, prospective applicants don’t have to pay a professional to learn how to get into these schools — they can learn about the process from the students living through it.

That’s why Lee decided to film her own reaction video: “I wanted to make it clear to the people who followed me that I didn’t have any huge spikes — I’m not a legacy student or anything like that, I don’t really have anything particularly special about me, I just want to reassure the underclassmen and the people looking to apply to these colleges in the future that there are students like me who are low-income but work hard and aim for these schools.”

Of course, despite this increasingly popular trend, college admissions remain opaque — candidates upload some essays to the Internet and a committee of people, of an amount you will never know, whose faces you will never see, compare your essays and test scores against some unknown rubric. Consequently, for the people who personalize the process online, they become clear, visible checkpoints on the way to admissions.

“I’ve been approached by underclassmen that I’ve never seen before at my high school,” explains Lee, who opened Princeton, Yale, and Harvard acceptance letters in her video. “I’ve been getting so many DMs and comments and stuff like that from random people. The biggest request I’ve gotten is like, what are your stats, what are your extracurriculars, give me tips on the college application process.” Morrison even created a GroupMe, now with 432 members, to more efficiently share such information with her viewers. A mother commented her daughter’s high school course load on Kubinec’s video and asked if he thought the work might overwhelm her.

While college reaction videos make the college process concrete and human, the sudden credibility given to high school students online, because of their acceptances, reflects the enduring mystery of the acceptance letter. Lee feels as though she abruptly transformed from someone scrambling to get into college into an expert on college admissions. She confesses, “I’m still not really sure how to view myself and my position in this whole crazy process.”