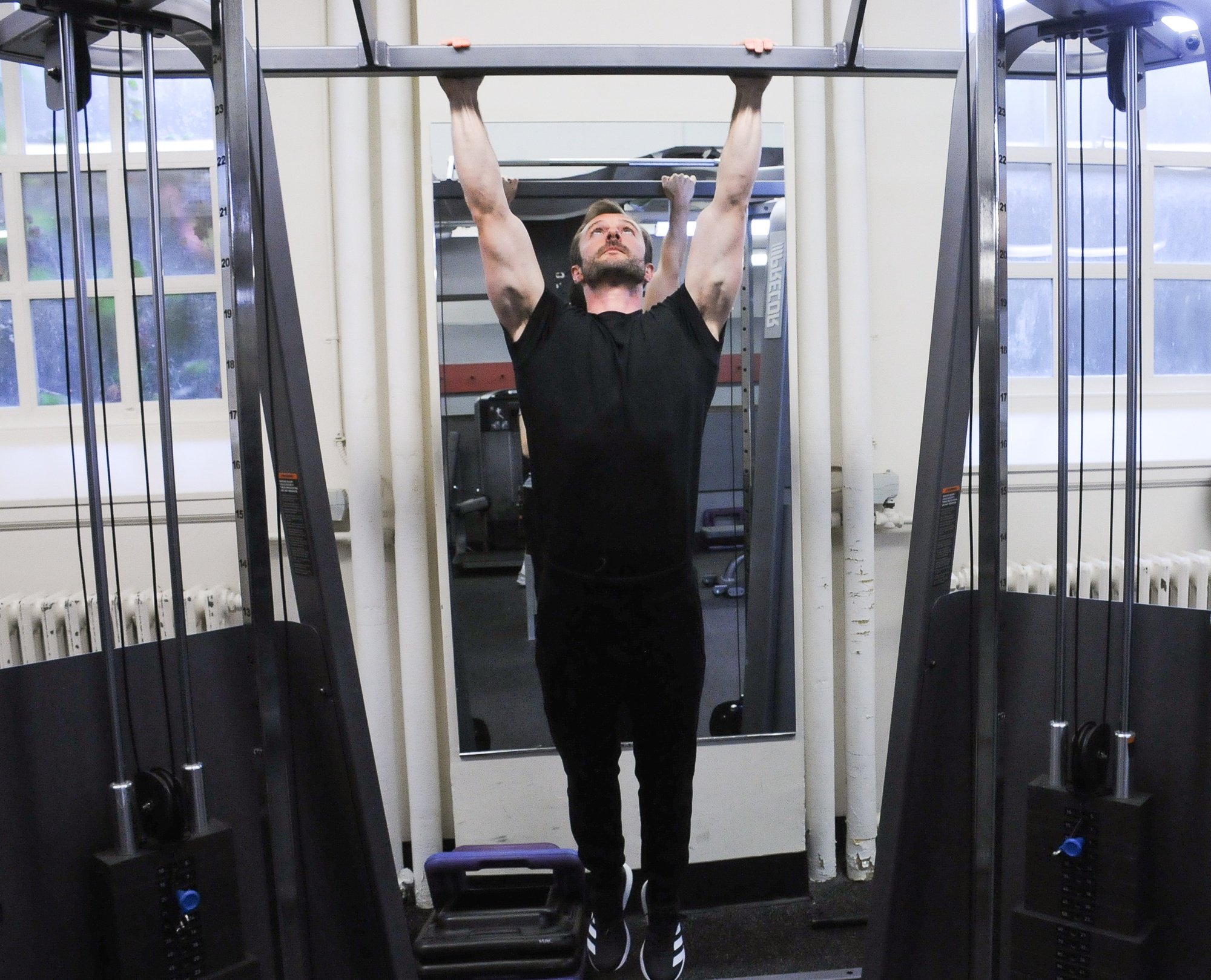 Working Out With Professor Pull-ups

Sandel hopes to continue combining his interest in philosophy with his interests in both law and fitness. “I try to take lessons that I would learn in the gym and apply them to life more generally,” he says. “Your goal is an event in its own right; pour everything you have into that and don’t look at the finish line. That is something you learn from training for these pull up competitions.”
By Scott P. Mahon

While most athletes prepare for big competitions by staying well-rested, eating well, and keeping calm, Adam Adatto Sandel ’08 has added an unconventional practice to his pre-competition ritual: reading ancient philosophy.

Sandel, a lecturer in Social Studies who sometimes goes by “Professor Pull-Ups”, took back the Guinness World Record title last December for the most pull ups in one minute. This is his fourth time holding the title; he clocked 68 pull ups most recently. Philosophy is integral to his performance: Plato and Socrates, according to Sandel, have a “very strong sense of the fragility of life — not only the possibility of failure,” but also the “difficulty of making a victory last.” In other words, philosophy helps answer a question that’s increasingly relevant to Sandel: “What do you do if you win?”

When I met Sandel in the lobby of the Malkin Athletic Center, he emanated a confident yet approachable vibe, and ushered me around the gym, which is still familiar to him from his days of college training.

Sandel worked out in college to stay fit for baseball, but he didn’t become serious about fitness competitions until after college. In the summer of 2015, the headline on the front page of the Boston Globe — “Marblehead man breaks multiple strength world records” — caught his attention. Marblehead man, otherwise known as Ron Cooper, had broken the world record in “Most pull ups with a 60 lb (27.2 kg) pack in one minute” — and Sandel, who loved pull ups, wanted to be his gym buddy. Sandel cold-called Cooper, who agreed to train with him. Soon after, Sandel became interested in setting a world record for pull ups himself.

In 2016, after a rigorous two-hour-a-day, six-day-a-week training schedule, Sandel succeeded, setting the record with 51 pull ups in one minute. Though Sandel and several others have gone back and forth in claiming the title, Sandel was determined to continuously up his game. When he achieved 68 pull ups in one minute last winter, he officially reclaimed the title. It has yet to be beaten.

Yet Sandel’s deep intellectual curiosity almost eclipses his athletic ability. Before college, Sandel thought social theory “just sounded so boring,” and had no intention of making it his profession. But his first year, Sandel took a course on justice and political philosophy which “grabbed” him, and by his junior year abroad, he was reading philosophy for his own sake. He packed only two books his junior semester abroad in Seville: Aristotle’s Politics and Thomas Hobbes’ On the Citizen. Sandel went on to pursue a Ph.D. in political philosophy at Oxford.

Sandel developed his interest in philosophy on his own, he explains, but his parents, Harvard Law professor and political philosopher Michael J. Sandel and Social Studies lecturer and scholar-in-resident Kiku Adatto, played an implicit role. “[My father is] a master at leading a dialogue, kind of like in the fashion of Socrates: asking questions, eliciting your viewpoints,” says Sandel. “He would do that all the time with [my brother and I growing up]. So in that sense, he certainly influenced me toward philosophy, in the sense of loving wisdom.”

Sandel returned to Cambridge in 2017 to attend Harvard Law School, where he has continued exploring his interest in philosophy and the law. He also teaches in the Social Studies department.

So what’s next for Sandel?

For fitness, he says it is obvious: “I like nice round numbers, so I want to get 70 pull ups and hold down the record. I hope someone beats it actually because that pushes me to get even better.” He also hopes to set the record for most muscle ups in one minute. (A muscle up is a pull up but one also needs to go over the bar.)

Sandel hopes to continue combining his interest in philosophy with his interests in both law and fitness. “I try to take lessons that I would learn in the gym and apply them to life more generally,” he says. “Your goal is an event in its own right; pour everything you have into that and don’t look at the finish line. That is something you learn from training for these pull up competitions.”

He is writing a book now, “Pull Yourself Up: Philosophy, Fitness, and The Good Life,” about the importance of “meaningful activity” to living a worthwhile life. He blogs about the connection between fitness and philosophy as well.

For Sandel, fitness is more than just a hobby or a path to a world record. “I look to training and fitness as… a powerful example, a personal example, [of] the kind of activity that draws together into various parts of your life into a narrative whole that gives you direction, but is also open ended and inspires you to keep going.”

—Magazine writer Scott P. Mahon can be reached at scott.mahon@thecrimson.com.