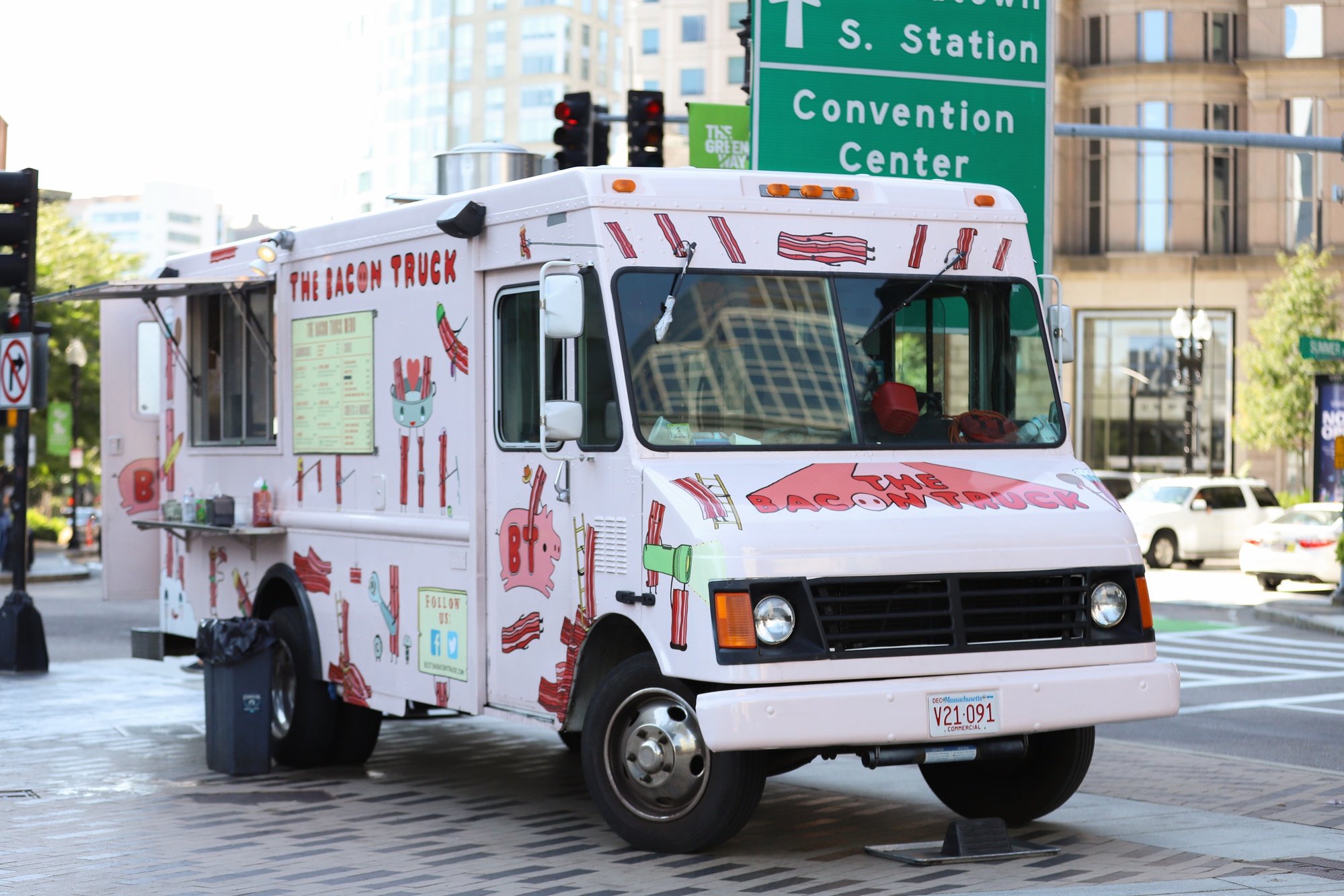 The Bacon Truck travels the Greater Boston Area throughout the week serving a variety of bacon-based items, from the classic B.L.T. to chocolate bacon truffles. By Amanda Y. Su
Advertisement
Advertisement

There are a half-dozen food trucks offering everything from lobster rolls to curry, but the dominant smell is that of smoky, greasy pork. The overwhelming scent wafts from the Bacon Truck, a millennial pink pigmented vehicle decorated with cartoon rashers.
By Matteo N. Wong

On Friday afternoons, Dewey Square becomes home to a drove of anthropomorphized bacon strips. A bacon spelunker teeters precariously on a ridge; a bacon window cleaner is hard at work; a bacon cowboy lassoes a much smaller strip of bacon; and two bacon strips recline in a skillet, in love and perhaps unaware of their fate.

There are a half-dozen food trucks offering everything from lobster rolls to curry, but the dominant smell is that of smoky, greasy pork. The overwhelming scent wafts from the Bacon Truck, a millennial pink pigmented vehicle decorated with cartoon rashers.

The Bacon Truck has been “fighting for the rights of those who choose to enjoy bacon in all of its glorious forms” since 2013, as per their website. Co-founders Sam Williams and J.J. Frosk are on a patriotic mission: “They hold these truths to be self-evident, that all foods are not created equal, that bacon is superior.”

Their menu offers typical bacon-centric fare, such as a B.L.T. piled with thick bacon and served with bacon-infused mayonnaise. Other items are more outlandish, such as Nutella-covered bacon. FOr, if for purists, they offer a “bunch o’ bacon” for three dollars.

“Recently bacon has been vilified and shunned in favor of foods such as quinoa, kale, granola,” the website continues. Yet nestled at the bottom of the bacon-filled menu is the green contour of a salad bowl and a friendly message: “Any sandwich can be prepared as a salad, just ask!” Beneath the outward appearance of boarish, bacon-mania, lies a shrewd business plan that has made this bacon haven one of the top-rated food trucks in Boston.

I met Williams in front The Bacon Truck in the early afternoon. Asked about the site’s porcine-nationalist parody, he says, “We’re just being silly. But I think you could say bacon is as American as the Declaration of Independence.”

Williams and Frosk have been friends since high school, where they first tossed around the “pipe dream” of opening a food truck. After graduating from college with degrees in communications and political science, Williams recalls thinking, “What the hell kind of a job is this going to get us?” So, they returned to their high school aspiration.

Opening a food truck was always the primary goal — bacon wasn’t essential, but it became the basis of a strategic business model.

“I love bacon, but I wouldn’t say that I’m bacon-obsessed,” Williams says. “For me, I wanted to come up with a food truck concept that really hit on all the nodes. Kids, yuppies, tourists — everyone loves bacon. It's kind of a universal language of guilty pleasure.” 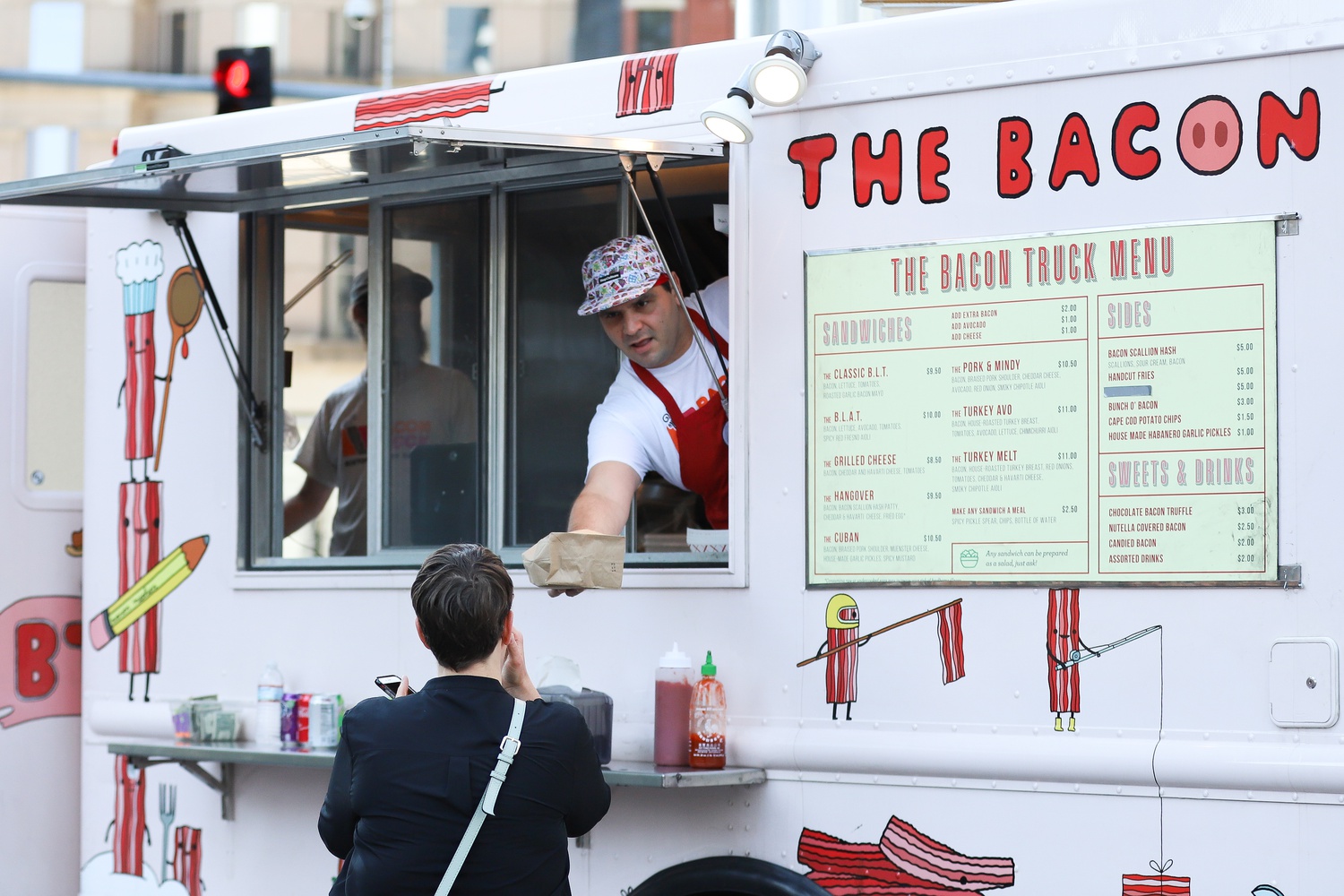 Williams and Frosk knew nothing about operating a food truck, so they embarked on two years of rigorous study — managing trucks and performing market research to learn the specificities of the Boston food truck market.

Despite extensive preparation, the operation has not always gone smoothly. To purchase their first company vehicle, the pair drove to the dealership in an old car that they had owned since high school, planning to trade it in.

“We're driving down the highway, there's a bunch of smoke coming out of this thing,” Williams says. “And some guy pulls up alongside of us and says, ‘Your car is on fire!’” They had to pull onto the side of I-93 and wait for emergency responders to extinguish the flames.

Williams looks back on the episode as a symbol of their perseverance. “For every crappy thing you power through as a business owner, as long as you can make it through it, you're usually better off in the end,” he says. They’ve learned a lot in the years since opening, overcoming early debt and tweaking their model to have enough in their piggy bank to last through the slow winter months.

The bacon-chauvinism and crusade against health food “quinoa, kale, granola” is also, to some extent, branding. “The market is a little oversaturated with healthy food trends,” Williams says. The truck’s salad option, then, is not a betrayal of this bacon-centric ethos, but instead part of their business plan, along with the vegan alternative (fried zucchini chips) offered at their cafe.

“Over the years we’ve learned that another effective way to grow your business is to appeal to a larger audience,” Williams says. “We’re certainly not opposed to vegetarians.” He, too, has been trying to limit his intake of unhealthy foods, including bacon.

This unabashed marketing of bacon and indulgence, coupled with accommodating health-conscious customers, has paid off. They now operate two trucks and a cafe in Charlestown, and have catered corporate events and a wedding, where they roasted an entire pig on a spit.

Yet even as The Bacon Truck saturates the food truck market with smoky, fatty pork, there may be such a thing — as Williams and his customers appear to admit — as too much bacon. As service winds down around 2 p.m., an employee from the nearby Vietnamese food truck, Bon Me, carries over a couple of boxes, likely filled with greens and pickled vegetables, for the Bacon Truck employees.