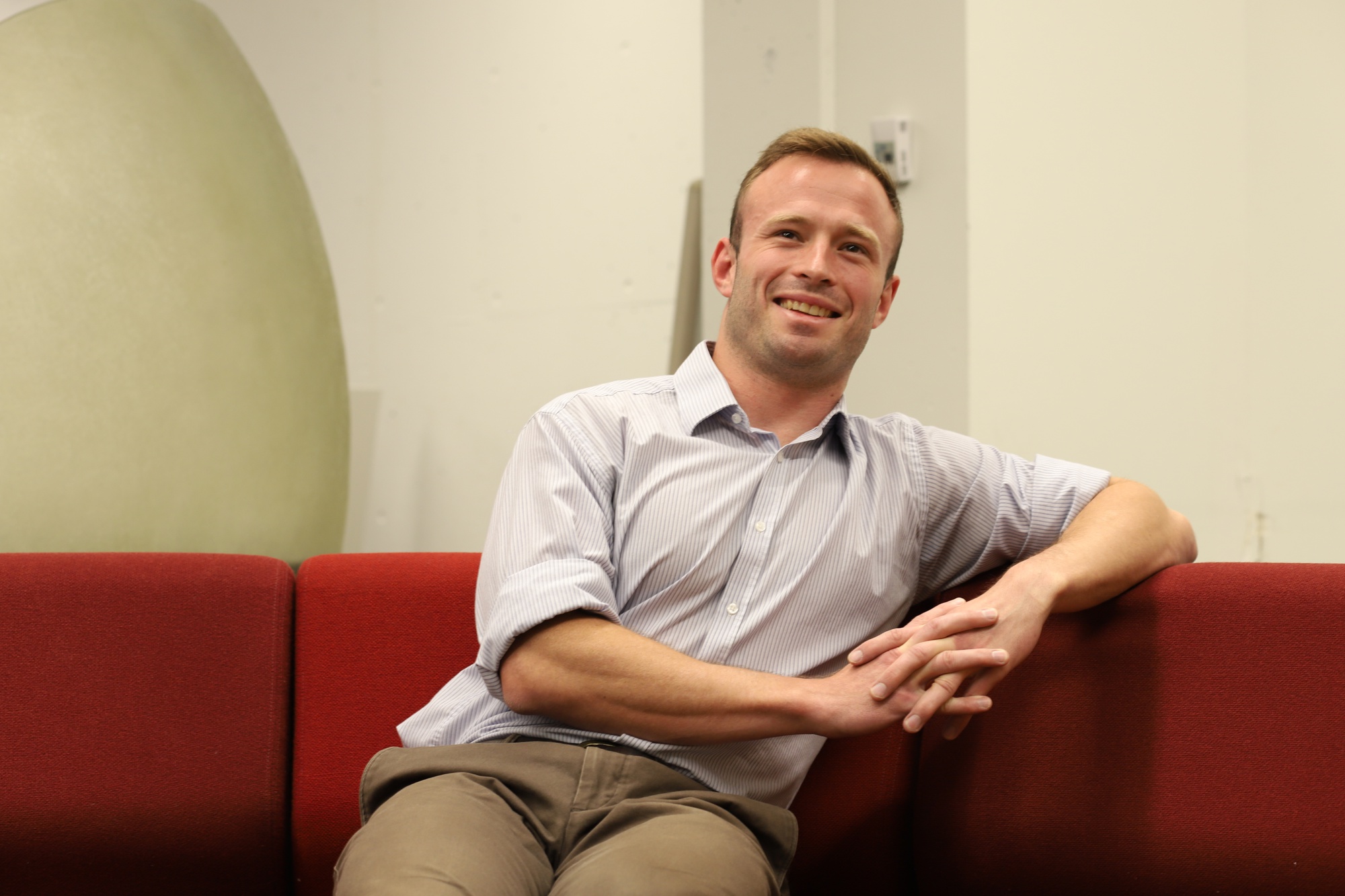 The Trigger Warning War at Harvard

Trigger warnings — advance notices that precede potentially disturbing material, often for the purported benefit of those with PTSD — have been the subject of great contention in recent years. Bellet’s studies claim to show that trigger warnings have a negligible impact on anxiety levels in response to “distressing” literary passages.
By Angela F. Hui

Like many graduate students in Psychology, Benjamin W. Bellet spends his time teaching sections, advising concentrators, and riding the elevator in William James Hall. He also enjoys reading and writing poetry and serves as a resident tutor in Currier. But Bellet has a special claim to fame: His psychological research on trigger warnings has been covered by outlets like the New York Times, Slate, and Vice and has sparked heated discussion online.

Trigger warnings — advance notices that precede potentially disturbing material, often for the purported benefit of those with PTSD — have been the subject of great contention in recent years. Bellet’s studies claim to show that trigger warnings have a negligible impact on anxiety levels in response to “distressing” literary passages. Some, like controversial author and University of Toronto psychology professor Jordan B. Peterson, have taken this research as proof that trigger warnings are “counterproductive,” while others have claimed that the researchers “missed the point of trigger warning[s] entirely.”

Bellet says he “didn’t expect [the research] to catch fire like it did.” Dealing with the maelstrom of attention, he says, was “pretty scary.”

It’s surprising to hear that Bellet wasn’t anticipating his research to go viral: After all, his first paper on trigger warnings was called “Trigger Warning: Empirical Evidence Ahead,” a title that Slate writer Shannon Palus has described as “trollish.” But it’s even more surprising to think that Bellet could be fazed by something as relatively harmless as 15 minutes of moderate notoriety.

With his close-cropped haircut and perfect posture, Bellet has the look of a military man. It’s easy to see him fitting in at West Point, where he majored in kinesiology, and at Fort Benning, where he completed basic training.

Now in the third year of his PhD program, Bellet originally joined the military to “see what [he] was made of” and “do something different.” Beyond the five years of active duty required of all West Point graduates, he had no long-term career aspirations. “I hadn’t really thought through it,” he says. “I just wanted to have adventures.”

During his second deployment, Bellet began to consider the possibility of studying psychology. The prospect arose, he says, in part from his “abiding interest in literature.” Reading “Notes from the Underground,” Bellet was struck by Dostoevsky’s ability to capture the quirks and nuances of human consciousness. His interest in psychology also developed from talking to his platoon about how they coped with difficult experiences.

“That led to the question, you know, how do we make meaning of suffering?” he says. “And how does that relate to how we end up adapting to it?”

Bellet took the GRE and applied to graduate programs in psychology while stationed in Kuwait City. He ultimately gained admission to the University of Memphis, where he earned his master’s degree. In 2017, he began his Ph.D. studies at Harvard.

Transitioning from the military to graduate school proved challenging. Bellet initially “felt like a fraud,” he says. “I did not make good grades in undergrad, so I never felt like the academic type.” Socially, he missed “that intimacy that you find in a combat unit” — relationships forged in close quarters under the looming “prospect of violence… [and] death.”

He was also struck by the noticeable difference in the “discourses” used by academics and members of the military. “It's kind of a corny joke,” he says, “but coming from the military, trigger warning meant something much different from what it does here.”

The “catchy” title of his paper, he says, grinning, was an “attempt to reconcile the military discourse with the academic.”

So foreign was this “trigger warning” discourse, in fact, that Bellet had never heard of the term until graduate school. In 2016, Richard J. McNally, the head of the laboratory where Bellet now does his research, wrote a New York Times op-ed opposing the use of trigger warnings in academia. The summer before Bellet came to Harvard, he found himself discussing the op-ed with Payton J. Jones, another psychology PhD student.

Before long, Bellet, Jones, and McNally decided to run a study on the effects of trigger warnings, with Bellet taking the lead as first author. They enlisted several hundred online participants, screening out those who had experienced traumatic events or been diagnosed with PTSD as well as those who failed attention checks. “In social psychology research,” Jones explains, “it’s a constant arms race between trying to get valid participants and appropriately screening out bots and things like that.”

“Ultimately,” Bellet explains, “what the study says is when you’re talking about anxiety levels, trigger warnings are neither helping nor... harming... with the exception being people who have a strong belief that words can harm them. For those people, trigger warnings were increasing anxiety.”

Shortly after being published, the paper began to make the rounds in the news and on social media. When asked whether he feels the study was covered fairly and accurately by the media, Bellet is blunt. “No,” he says, before offering a qualification: “It depends on which media outlet.” According to Bellet, some journalists overstated the conclusions that could be drawn from their “first-time exploratory study.”

Since the publication of that study, Bellet, Jones, and McNally have completed another study, which Jones first-authored. Titled “Helping or Harming? The Effect of Trigger Warnings on Individuals with Trauma Histories,” the paper is still undergoing peer review.

As suggested by its title, the study replicated the first trigger warning experiment using online participants who had experienced trauma and in some cases had been diagnosed with PTSD. Like the first study, the replication showed that those who were primed with trigger warnings did not show lower anxiety responses than those who were not.

On July 10, Jones posted a link to the pre-print of this study in a Twitter thread, which received a wide range of responses. Several Twitter users took issue with the study for evaluating the usefulness of trigger warnings based on their effect on anxiety. Erin E. Kane, an anthropology postdoc at Boston University, tweeted, “Like many other folks commenting, I use trigger warnings... not to alleviate students’ anxiety but to give students the autonomy to choose when to be exposed.”

In addition, a few Twitter users claimed that the trigger warnings used in the study — written as “TRIGGER WARNING: The passage you are about to read contains disturbing content and may trigger an anxiety response, especially in those who have a history of trauma” — were overly general and placed a heavier emphasis on anxiety responses and trauma than most trigger warnings used in real life.

“Of course, we always welcome feedback,” Jones says, though he found the “negative personal attacks” he received to be “frustrating.” Nowadays, Bellet doesn’t worry much about how his research is portrayed in the news or on social media. “[Jones] is more savvy than I am on that stuff,” he says. “I’d rather read my poetry.”

In spite of the research done by Bellet, Jones, and McNally, trigger warnings remain standard fare in some communities, though they indeed do not always resemble the warnings used in the experiments.

The Rape, Abuse & Incest National Network, the largest anti-sexual violence organization in the country, advocates for the use of trigger warnings in the entertainment industry. However, they are generally presented as “content warnings” or notices that “viewer discretion is advised,” says Erinn A. Robinson, RAINN’s press secretary, explaining that oftentimes “people don’t use the word ‘trigger’ in a more serious context.”

Similarly, the Boston Area Rape Crisis Center uses the phrase “content note” in their writing to precede potentially “sensitive” material, such as personal accounts of sexual assault, according to Jessica L. Atcheson, BARCC’s marketing and communications manager. The phrase “trigger warning” is not used.

Atcheson says these warnings are meant to help readers, particularly survivors of sexual assault, “make an informed choice” about whether and when to engage with potentially distressing content. Likewise, some responses to Jones’s tweets have compared trigger warnings to the consent forms that need to be signed by participants before experimentation in the scientific community.

Bellet, however, draws a strong distinction between trigger warnings and consent forms. Consent forms, he says, constitute “content notification,” or an “objective statement... about what you’re about to encounter.” Trigger warnings, on the other hand, include a “suggestion about the possible... psychological consequences of engaging with that material.”

It remains to be said, then, whether Bellet’s characterization of trigger warnings matches the way they are used in practice. Perhaps, in some contexts, the warnings have evolved into something quite different from what Bellet and his colleagues studied. In any case, Bellet has decided that his research interests are “kind of moving away from trigger warnings for the time being.”