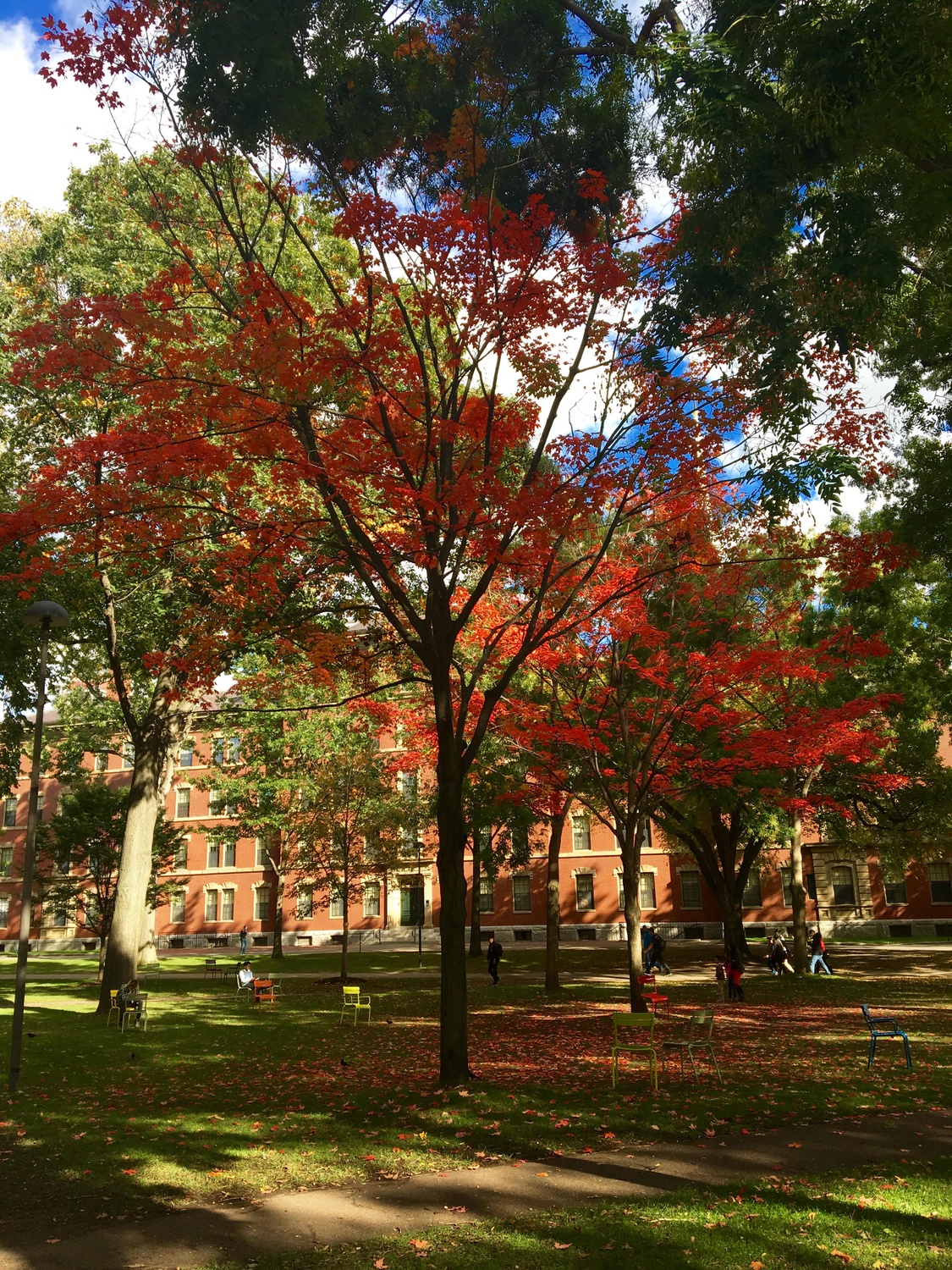 This year, the fallen leaves in the Yard are a symptom of a much larger problem: the significant drought currently affecting Massachusetts. By Courtesy of Valerie Elefante
Advertisement
Advertisement

Brittle yellowed leaves cluttered Harvard Yard in early August, well before they typically change color. The fallen leaves are a symptom of a much larger problem: the significant drought currently affecting Massachusetts.
By Talia M. Blatt and Shelby N. Tzung

Brittle yellowed leaves cluttered Harvard Yard in early August, well before they typically change color. The abridged autumn transformation of Harvard Yard seems to represent only a subtle, minor casualty in light of the health and social justice crises plaguing this semester. But the fallen leaves are a symptom of a much larger problem: the significant drought currently affecting Massachusetts.

Between May and September, Boston received 7.2 fewer inches of rain than is typical. That drop-off in precipitation, compounded by record high temperatures, created the perfect conditions for a dry fall. According to the most recent data available from the Massachusetts government drought monitor, from Sept. 4, 2020, all seven regions in Massachusetts are in a Level 2, or “significant,” drought. In three towns, the Massachusetts Department of Environmental Protection has declared water emergencies, compelling local officials to implement water restriction measures.

“Clearly once we get into Level 2, and as we’re seeing drying conditions continue and likely even getting worse, the impacts on environmental and natural resources are particularly high,” says Vandana M. Rao, the Executive Director of the Massachusetts Water Resources Commission. The most pressing issue, Rao says, is a lower water level, which directly affects the water supply for humans and impacts the aquatic habitat of plants and animals. Low water levels also magnify the concentration of toxins, lowering water quality. A secondary, yet still imminent and observable, concern is the heightened likelihood of wildfires, which pose a threat across the United States. Dry, dead plant matter is highly flammable, so the initial plant die-off from insufficient moisture becomes tinder. This year alone, more than 1,000 wildfires have erupted in Massachusetts and burned over 700 acres of land. Since fire officials rely on their local water supplies to combat fires, the decreased supply has only exacerbated the forest fires.

“The public water supply systems are also stretched thin because, especially this year, a lot of people have been at home and using a lot of water,” Rao says. The shortage of water is particularly concerning for farmers. The cranberry, an iconic Massachusetts crop, requires large amounts of water to harvest, but dried-out bogs are damaging this year’s yields, causing withering and decolorization.
“Much of the cranberry industry is located in the Southeast region of Massachusetts, and that region in particular has been hard hit in the last few months,” Rao says. “We will have to think creatively about how to create pathways for them to meet their water needs for the harvest.”

Adaptation is easier said than done. “I’ve talked to a number of [Community Supported Agriculture organizations] and local farmers who are well aware of the issues, but it takes resources to change and to adapt, and so they’re put into a hard place. To continue to be viable while having to innovate is an extra stressor in what is already a difficult business,” Huybers says. “I think the will and the capability are there, and I hope that the resources can match.”

Intense droughts are not unprecedented in Massachusetts: A drought in the 1960s lasted the better part of the decade and brought Quabbin Reservoir, the water supply for most of Greater Boston, to 45 percent of its holding capacity. But that drought was considered an anomaly, a once-per-century freak weather phenomenon. The state’s current record-breaking drought comes only four years after the 2016-2017 “flash drought,” the most severe and rapidly deteriorating drought in Massachusetts since the 1960s. These back-to-back, sustained, and damaging events are evidence of a broader trend towards warmer and more unpredictable weather, Huybers says — a shift scientists attribute, at least partially, to climate change.

“There’s a really powerful relationship here,” he suggests. He explains that global warming rapidly increases the amount of water that air can hold, which contributes to depleted soil moisture. “If you warm the air by one degree Celsius, the air can hold seven percent more water vapor. That’s a percentage increase, so it’s compounding. It’s a massive change,” he stresses.

Rising water temperatures and sea levels associated with climate change concentrate precipitation in intense storms rather than distributing it as rainfall. Not all precipitation is created equal, Huybers clarifies. “The style of the rainfall matters a whole lot,” he says. “If you get five inches of rain in a single day, it’s going to run off. It’s not going to percolate into the ground; it’s going to cause its own flooding problems.”

Asked if climate change policies and drought management are connected, Rao responds enthusiastically. “Climate predictions are saying that we will likely experience more short-term and long-term droughts and with what we’ve already seen in 2016 and now, some of these droughts tend to be fast-moving,” she says. Despite acknowledging the connection between climate change and increasingly disruptive weather patterns, Rao also points out that there is not much her department can do on its own to prevent future droughts. As global weather patterns shift, more frequent dry conditions and sporadic storms become increasingly inevitable — and impossible for a single environmental department to tackle alone.

“Part of our new drought plan is providing guidance to communities to think through preparedness, what they should be doing and putting in place even when there is no drought so that, once those conditions do set in, they are much better prepared,” Rao says. “Part of that is really to be as efficient in our water use as we can so that we can make do with far less water.”
“Every drought is different and each is a learning experience for us,” she says.

Huybers believes this comes back to Harvard, where debates about the University’s role in fighting climate change have escalated in recent years. “There are strong reasons to walk the walk,” he says. “Harvard has global reach, and an ability to address questions at a broad scale."

Huybers views droughts as a learning experience, but one that can be applied to tackling broader climate challenges. “Because water is something we can only bank up so much, it’s one of the environmental limitations we begin to feel most immediately. We actually have to change our living patterns,” he says. “Most things we can push off to other years, and future generations. Like ‘Oh, it’s getting warmer this year, but am I going to actually change the way I live?’”