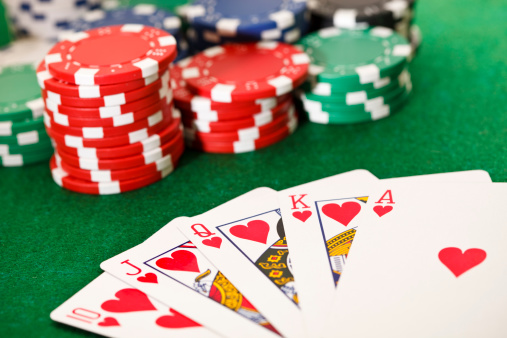 From the Poker Table to the Zoom Screen

The complexities of poker are what drew co-president Dasha Metropolitansky ’22 to the game in the first place. “I picked up a few pretty simple poker math books and realized very quickly that this game, which you can learn in ten minutes, was infinitely more complex than I thought it was.”
By Sarah W. Faber and James C. D. Quillen

“Today’s poker is different from the poker played five, ten years ago,” says Aaron W. Chen ’22, founder and co-president of the Harvard Undergraduate Poker Club. Chen refers to what’s known as the “Moneymaker effect” — poker’s boom in popularity after accountant Chris Moneymaker won the 2003 World Series of Poker without being a professional gambler. “After Moneymaker made poker more mainstream, people started devoting more time and resources into studying poker and fleshing out the theory,” Chen says.

The club, founded last spring by Chen, Nic Xu ’20 and Anders Angerbjorn ’20, aims to create an inclusive space for students of all skill levels to learn about poker. HUPC offers workshops once a week and runs games twice a week. These workshops are open to all, but since so many new players have expressed interest this semester, the club has started with beginners. Metropolitansky says the workshops “really [teach] the fundamentals of poker from the ground up.” The club hopes that by aiming these workshops at beginner players, they will be able to include those who do not have prior experience with the game and build up a strong and diverse base of poker players at Harvard.

On Nov. 7, the club invited world poker champion Maria Ho to speak to the club about her experience as a professional player.

“She’s one of the best female poker players, but she is also one of the best players in the world, period,” Metropolitansky says. “In 2018, 3.8 percent of the competitors in the World Series of Poker Main Event were women. In 2019, that number was 4.1 percent — so still constantly below five percent, which is kind of crazy,” she continues. “A big goal of our club is just to make sure that people feel that they have a community of people like them who are there to support them.”

Historically, Harvard’s poker scene has existed underground and largely consisted of men; in a 1967 Crimson article, a poker “shark” on campus claimed that “women are poker’s worst enemy. Women and poker just don’t mix. They play just like they drive.” By inviting such a prominent female player to speak, the club hopes to move beyond the perception of poker as a male-dominated activity and create a space at Harvard where anyone can get involved with playing poker, no matter their identity or background.

The same article details instances of huge financial losses on the part of students, including one “ who gambled away a semester’s allowance in a night. Then he put his Lotus Elan and his title (he was a Baron) on the table — and lost them both.” HUPC hopes to remove all financial burdens by hosting tournaments with no buy-in — students don’t have to pay to join games. To do this, the club has two sponsors: Citadel Financial Group, and Susquehanna International Group.

“Sponsors provide us with money and funding for a tournament and in return they receive resumes from our members; they’re allowed to have recruiting events,” Chen explains. “So it’s a pretty transactional relationship.” Chen and Metropolitansky note that firms, especially hedge funds,are looking to recruit people with the kinds of skills one can learn from poker: the ability to stay calm under pressure, manage risk, and make decisions in the face of uncertainty.

The club has received an overwhelming amount of interest from Harvard students studying remotely. When Chen first sent out an interest form, over 200 people replied, and over 100 RSVPed to their event with Maria Ho.

The interpersonal aspects of poker, which can be lost online, are something that the club is striving to retain even when it is forced to meet on Zoom. Despite an entirely virtual semester, HUPC creates Zoom rooms during the biweekly games so that players can still converse and get to know one another between hands.

“This is just the beginning,” Metropolitansky says. “I think a lot of people want to play poker and want a place to do it consistently, and I think that’s even more true now with the pandemic — people are at home, they miss seeing their friends and having fun, and this is a great opportunity for people to do something that doesn’t have to be done physically or in-person.”