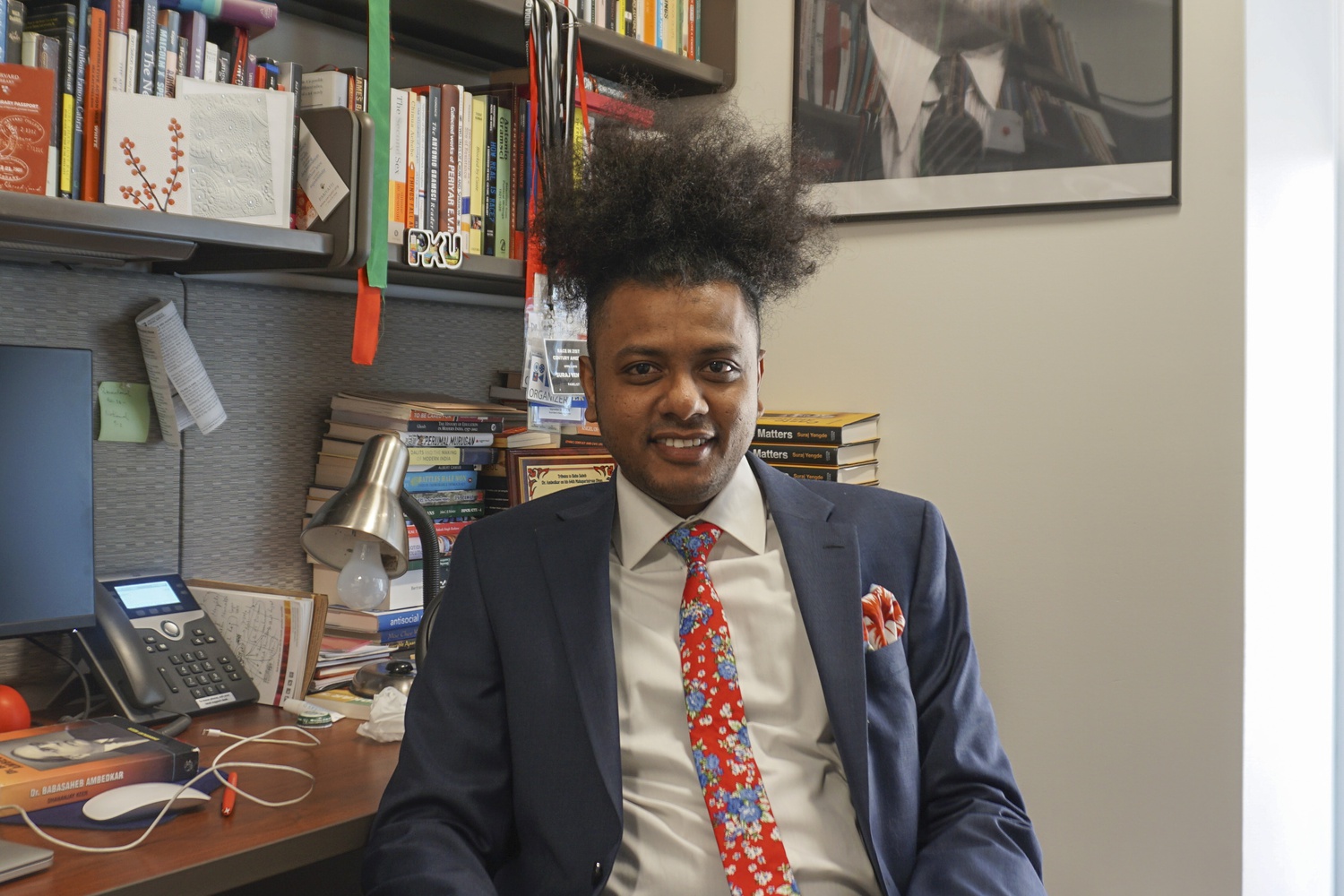 Suraj is an author of the bestseller "Caste Matters," which was recently featured in the prestigious "Best Non-fiction Books of the Decade" list by The Hindu. By MyeongSeo Kim
Advertisement
Advertisement

Suraj Yengde and the Struggle for Dalit Liberation

"You don’t even dream of this shit,” he says. “You dream what is in your limits.” Suraj Yengde has spent his entire life doing the unimaginable: attending college in India, studying in England, pursuing a Ph.D. in South Africa, and, in 2016, coming to Harvard.
By Matteo N. Wong

Suraj Yengde grew up in a room similar in size to his office at the Harvard Kennedy School, about 100 square feet. But while the office is his own, he shared his childhood room with five others. His desk sits where a raised bed would have — he gestures above, below, and to the sides of the wooden desk, pointing to where each family member would have slept. Then, he sketches loose rectangles into the air with his fingers: Instead of the smooth white walls of his current office, decorated with large, framed portraits of Angela Davis, Malcolm X, W.E.B. Du Bois, and B.R. Ambedkar — a hero of Yengde’s credited with beginning the Dalit Buddhist movement to advocate for Dalit rights and helped write the Indian constitution — his home was made of unmortared brick topped by a corrugated metal roof, with sand perpetually blowing into the room through its cracks.

Yengde, himself a member of India’s Dalit, or “untouchable” caste, is a postdoctoral fellow at the Kennedy School. His research and activism focus on the caste structures that produce Dalit oppression, as well as Black Studies and migration in the Global South.

Most of India’s over 200 million Dalits face segregation, extreme poverty, and prejudice — products of a caste hierarchy that, Yengde says, not only physically traps Dalits, but also circumscribes their ambitions. Attending college, let alone studying abroad, were almost unthinkable to most Dalits living in Nanded, India, where Yengde grew up: According to census data, only two percent of Dalits in India have a college degree. Though Harvard has over 600 Indian international students and scholars, Yengde knows of only three others of his caste.

Yengde has spent his entire life doing what he at one time believed to be unimaginable — attending college in India, studying in England, pursuing a PhD in South Africa, and coming to Harvard in 2016 to finish his dissertation.

“You don’t even dream of this shit,” he says. “You dream what is in your limits.”

While Yengde’s journey is extraordinary, he says the caste-based oppression he has encountered is typical. He grew up in what he called a “slum,” where open sewer-lines were the norm; across India, more than 20 percent of Dalits lack access to clean drinking water. When he ran for student union in college, lackies working for a rival candidate kidnapped him and physically harassed his family (despite this, he won three years in a row); tens of thousands of anti-Dalit crimes, many of them violent, are reported each year. At the University of Mumbai, students and professors ignored, belittled, and infantilized Yengde, even artificially lowering his grades to prevent him from being top of his class. (He ranked third, marks high enough to earn the scholarship that allowed him to study in England.) 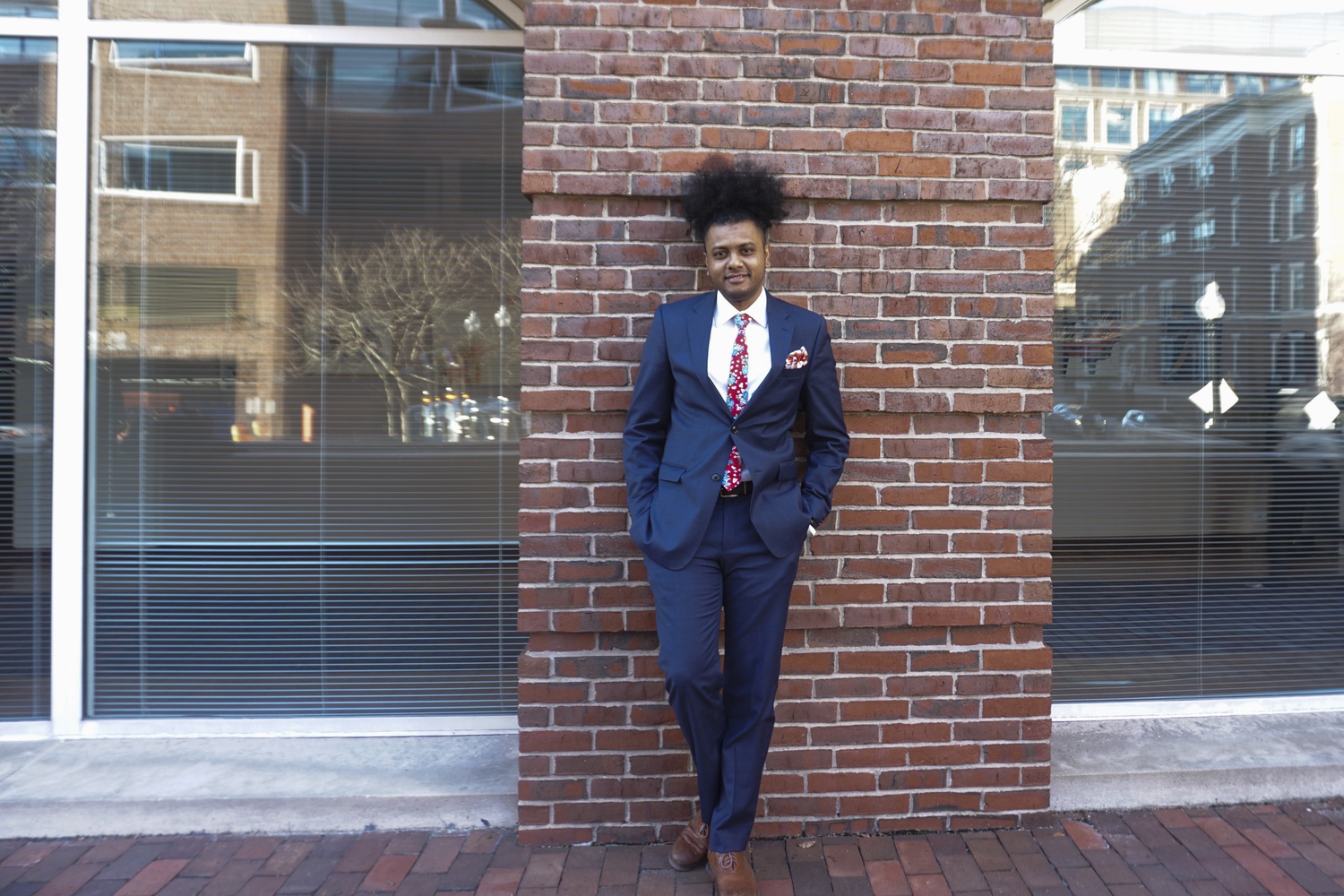 Suraj is a postdoctoral fellow at the Initiative for Institutional Anti-racism and Accountability, Shorenstein Center on Media, Politics and Public Policy at the Harvard Kennedy School. By MyeongSeo Kim

Yengde’s drive to push the limits set by his caste, to pursue an education, and to fight for global liberation, was in part inspired by his father, who was a member of the Dalit Panthers — a political organization styled after the Black Panther Party. Size is not the only thing Yengde’s childhood home and Harvard office have in common — books are another constant. Today hundreds of books by Amiri Baraka, Ambedkar, Audre Lorde, and others fill his many shelves; as a child, his father, who had a ninth grade education, shoved a plank into the brick wall and piled it with his own collection, with authors including Tolstoy and Einstein, influences that have stayed with Yengde throughout his life. It was his father who urged him to pursue a law degree.

During his final year of college, Yengde began looking abroad. “I decided that the education system was not nourishing my intellectual hunger,” he says. His vision encompassed the globe, whereas everyone around him wanted “to be the king of a small palace.”

Caste, again, stood in his way. Yengde had little money, and nobody in his community knew anyone who had been abroad. He travelled alone to a city six hours away to seek help and information, knocking door-to-door before finally learning about a scholarship for Dalit students to study abroad. Lack of education, resources, and knowledge make such scholarships and similar affirmative action programs inaccessible to most Dalits. In 2003, only 1.5 percent of Indians in the U.S. were of the Dalit caste or other lower castes, and today over 90 percent of Indians abroad are from the upper castes.

“One of my quests is that Harvard makes the concentrated effort to get more students from the community I come from, because that will be an actual investment into correcting certain historical measures,” Yengde says.

I first met Yengde in Harvard Square on a rainy night, where he was setting up for a 24-hour protest against India’s Citizenship Amendment Act. He emphasized the law’s discriminatory effect on Dalits. As Yengde has traveled across the globe for his education and activism, he’s often found himself to be the only Dalit. “It has been quite a good and bad, but lonely, life,” Yengde says. “But it’s for a purpose.”

“What [the protest] tells to the people across the world is that within the Harvard institution there is a sensitivity,” he told me. “That there is fighting for the human, civil, political rights of the people who don’t have that.”

When Yengde left India, his caste categorization followed him. In England, Indian students of higher castes beat him up. During his first three years at Harvard, he generally avoided socializing with other Indian students, some of whom have heckled and slighted him.

Even the very names of other Indian students can be haunting: “My experience has been of trauma,” he says. “The last names that people have, I have had horrible experiences with them growing up, because they were the masters — these were the landlords, these were the supervisors, these were the managers.” The burden is on the bearers of “hegemonic names,” Yengde says, to earn his trust.

Despite this isolation, Yengde says he has also found incredible support at Harvard, especially from Black students, scholars, and activists. “My colleagues around, they really understand my value,” he exclaims, leaning back and spreading his arms wide. “Isn’t it amazing — that someone actually realizes what you bring to the table?”

Divinity School Professor Cornel R. West, along with Khalil Gibran Muhammad, a professor of History, Race, and Public Policy at HKS, have been key mentors.

“Suraj is the towering young Dalit intellectual of his generation,” West says. “He’s brilliant, he’s courageous, and engaged in the struggle for freedom.”

Yengde is working on five book projects with two future ideas in mind, writes a column for one of India’s prominent English-language newspapers, intends to co-teach two classes — one with West and one with Muhammad — and engages tirelessly in the movement for Dalit rights and global justice.

“Desperation creates energy, in your mind, in your brain, in your heart, in your body,” Yengde says. “You know it, it works like an electric current with you, until you achieve what you aim to achieve.”