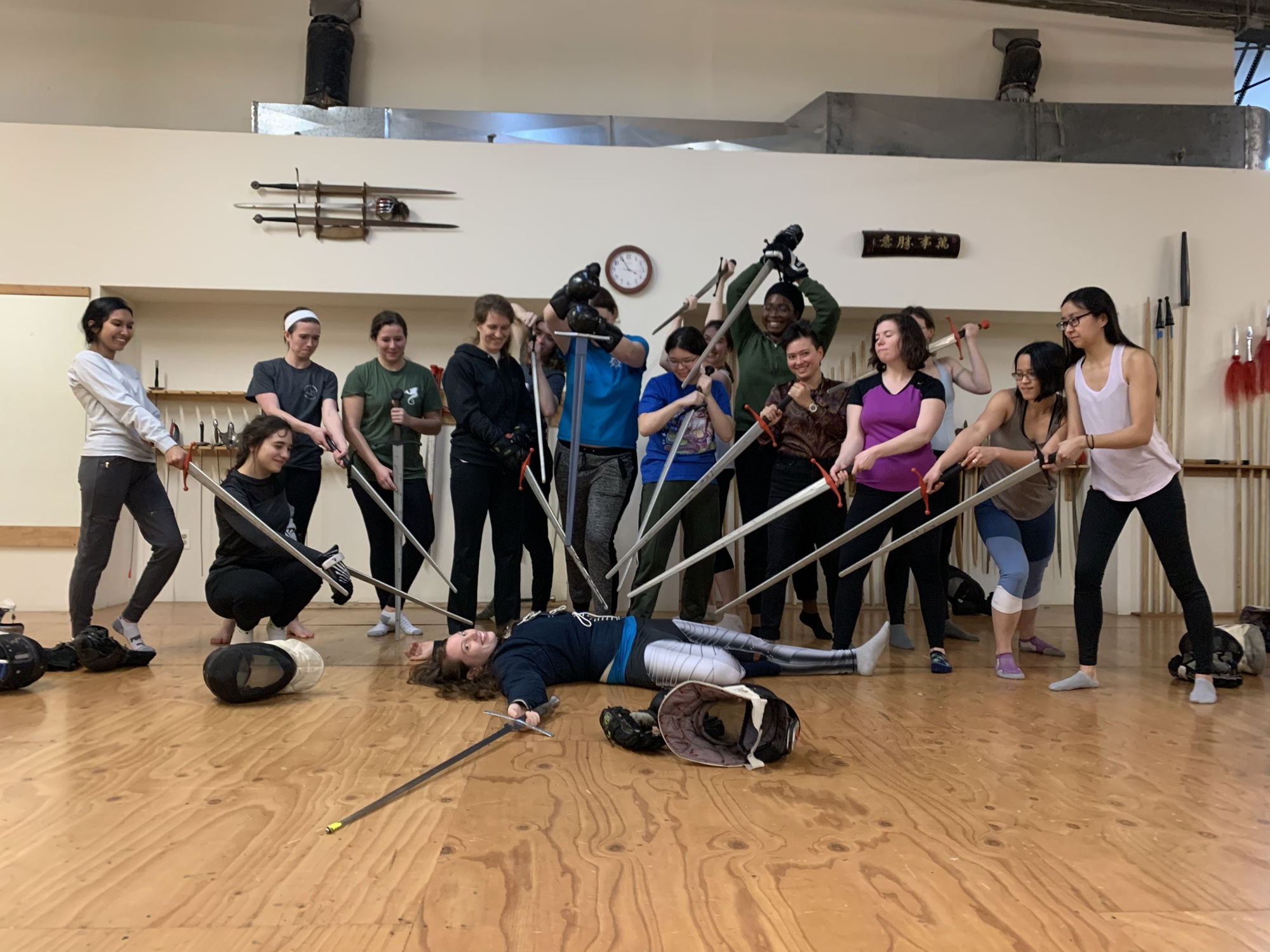 When Twombly first looked up “sword fighting” on a whim and joined the Boston Armizare, she was the only woman in the club. She was determined to bring her hobby to a wider audience, however, and set out to show other women that they, too, can enjoy martial arts.
By Sophia S. Liang

As I pull the mask over my face and peer through the black steel mesh, I can’t help but smile. I am standing in the middle of a remodeled industrial warehouse with 14 other women, ranging from middle school students to working professionals. With our leggings, graphic tees, and mismatched socks, we could’ve gathered for a yoga class — if it weren’t for the three-foot-long swords we held.

We are wide-eyed and fidgety as we wait in anticipation of our first lesson in Historical European Martial Arts (HEMA). We’ve gathered on a Saturday afternoon for “Give a Girl a Sword!”, an introduction to sword fighting workshop for women hosted by the Boston Armizare at the Athena School of Arms. Over the next four hours, instructors Christina R. Twombly and Jackie D. Doyle lead us in footwork, cutting, and thrusting drills, and then guide us step-by-step through a fighting sequence.

Rarely have I wielded so much as a large kitchen knife, and the heavy — albeit blunt — sword feels awkward in my hands. My movements start out uncertain, unbalanced. I instinctively flinch when my partner strikes my mask’s steel netting, inches from my eye.

“Don’t be afraid to hit harder,” Twombly tells me. I swing again.

As Twombly and Doyle explain, the Boston Armizare studies and recreates the teachings of Fiore dei Liberi, a 14th century knight and fencing master whose manual Flower of Battle depicts a variety of fighting techniques. Although there have been famous female warriors throughout history — Joan of Arc, Boudica, Ching Shih — sword fighting has been, and remains, a male-dominated sport.

When Twombly first looked up “sword fighting” on a whim and joined the Boston Armizare, she was the only woman in the club. She was determined to bring her hobby to a wider audience, however, and set out to show other women that they, too, can enjoy martial arts.

“You see it all the time in the media, just men wielding swords, and that’s fine,” she says. “And little boys grow up and they’re like, ‘I want to be a knight,’ and that’s cool. But then when girls do it, it’s like, ‘Oh, no, you want to be a princess.’” Twombly, who is now rated 9th in the nation for women’s longsword, rolls her eyes.

The Give a Girl a Sword campaign was created by Esphinges, the first female international HEMA network. Last year, Twombly proposed the workshop to her club, and she was given control of its instruction and design.

“This is going to be for women; it’s going to be taught by women,” says Mike J. O’Brien, president of the Boston Armizare. “It’s inclusive to all women. So cis women, trans women, non-binary identifying people — we wanted this to be very open and a safe space for them to come and try something new.”

Twombly also addresses the economic barrier to entry for her hobby: “Equipment costs a lot of money, because it’s pretty specialized,” she says. In order to increase HEMA’s accessibility, she has made this workshop free of charge.

This is the third Give a Girl a Sword event hosted by the Boston Armizare, and, according to Twombly, each event has garnered more interest than the last. All 15 spots in the workshop were filled within seconds of the RSVP opening online — set just one minute past midnight. Twombly partly attributes the surge in interest to popular media like Game of Thrones and Wonder Woman, “where we see women being badass.”

Indeed, it is pretty damn cool when my motions become smoother and I grow more confident performing the sequence of attack and defense. I feel the energy flowing up through my arms, ending in the satisfying, powerful contact of sword on sword. By the end of the workshop, our nervous giggles have been replaced by the clacking of blades echoing off the walls.

As we take off our gloves and put on our shoes to head home, Twombly explains to me the meaning behind her workshop’s unofficial motto, “Fight like a girl!”

“The original term was used as a derogative, to mean ‘badly’ or ‘weakly’ or what have you,” she explains. “Now we can kind of turn that around on its head,” Twombly says. “Now we’re like, yeah, we’re proud of that. We fight like girls. Yes we do.”