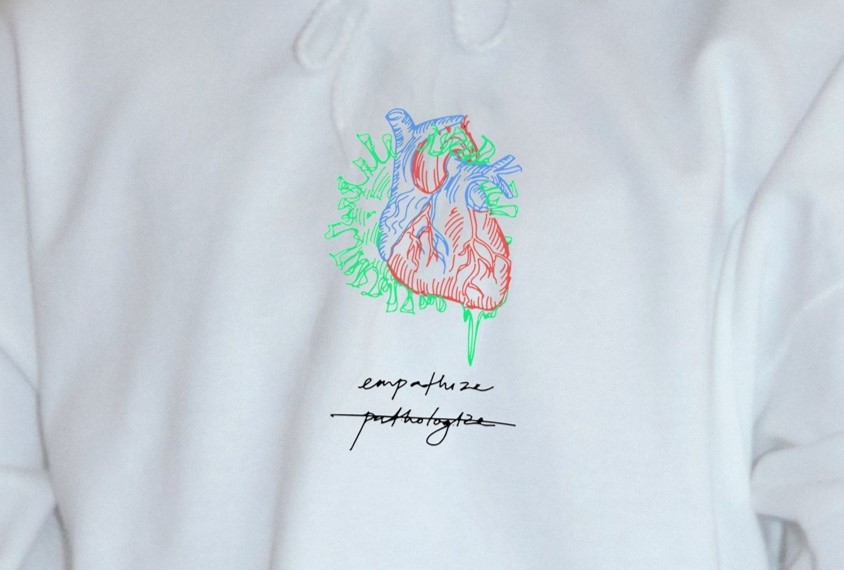 The newest item released by Kelsey Chen's fashion startup Bodhi Parts features an embroidered design: a blue and red anatomical heart intertwined with a jagged outline of a virus — and under it, the word “pathologize” crossed out and replaced with the word “empathize.” By Courtesy of Kelsey Chen
Advertisement
Advertisement

Bodhi Parts is a progressive-branded fashion start-up founded by Kelsey Chen '22 that is working to stop stereotypes about Asian-Americans amid the Coronavirus pandemic and instead encourage people to empathize with others.
By Maliya V. Ellis

If you scroll a couple panels downwards on the Bodhi Parts website, you’ll see Kelsey Chen ’22 perched atop a refrigerator in ripped jeans and the fashion brand’s newest product: a COVID-19-inspired “empathy hoodie.”

The white hoodie features an embroidered design: a blue and red anatomical heart intertwined with a jagged outline of a virus — and under it, the word “pathologize” crossed out and replaced with the word “empathize.” This hoodie’s design is Bodhi Parts’s response to the increase in anti-Asian racism following the spread of the coronavirus.

Bodhi Parts, Chen’s progressive-branded fashion start-up, originally grew from her passion for upcycling thrifted clothes. Chen would post her creations on her personal Instagram — black jeans with “tease” painted on them in lime green gothic font, and bright orange cropped shirts, among others. Last year, after receiving attention on campus for her designs, Chen decided to turn her passion into a clothing line. Her brand now has its own website and Instagram page and has grown to include a team of eight people.

Originally, Chen planned to release Spring/Summer and Fall/Winter collections for 2021. However, the coronavirus pandemic set the stage for an earlier opportunity to merge fashion and social change into a cohesive product, its first major item for sale.

“There was a lot of thought behind this design of communicating how the current virus is exposing this other virus that’s also taking over — not just people physically, but also their mentality towards Asian Americans,” says Samuel Y. Leung, a first-year Rhode Island School of Design student and co-designer of the hoodie.

“We are finding a very disgusting resurgence of a lot of yellow-peril-age rhetoric which speaks about Chinatowns as dirty places, which criticizes ‘Asian eating habits’ as disgusting and illness-inducing,” Chen says. “And we just think that it’s so important at this time to not be scapegoating, to not be pathologizing and to have some empathy towards people that are suffering.”

According to a San Francisco State University report, researchers documented a 50 percent increase in the number of news articles related to the pandemic and anti-Asian discrimination between Feb. 9 and March 7. Other reports of violent attacks on Asian Americans have emerged across the country.

Through the sale of the hoodie, the brand hopes to counter these threats. Chen believes fashion provides a uniquely visible vessel for tackling social issues. “The first thing that someone is going to see when they see me is me and the clothes that I’m wearing,” Chen says. Clothing is an integral part of “interpersonal interaction,” and constitutes a space for contesting “systems of domination, like racism.” According to Bodhi Parts, buying and wearing the empathy hoodie is one way to contest and interrupt racism.

The sale of the hoodie will also support those affected by the pandemic. The brand will donate 80 percent of its profits from the $60 hoodie to COVID-19 relief groups, including Doctors Without Borders, Futures Without Violence, Feeding America, Meals on Wheels, Wuhan Task Force, and homeless shelters in hotspot cities.

This particular intervention in the pandemic is reflective of the brand’s broader mission: On its website, Bodhi Parts defines itself as “a luxury, high-end streetwear brand that is dedicated to enacting an anticolonial future,” and, according to its Instagram page, it seeks to “unmake aesthetic and material hegemonies.” 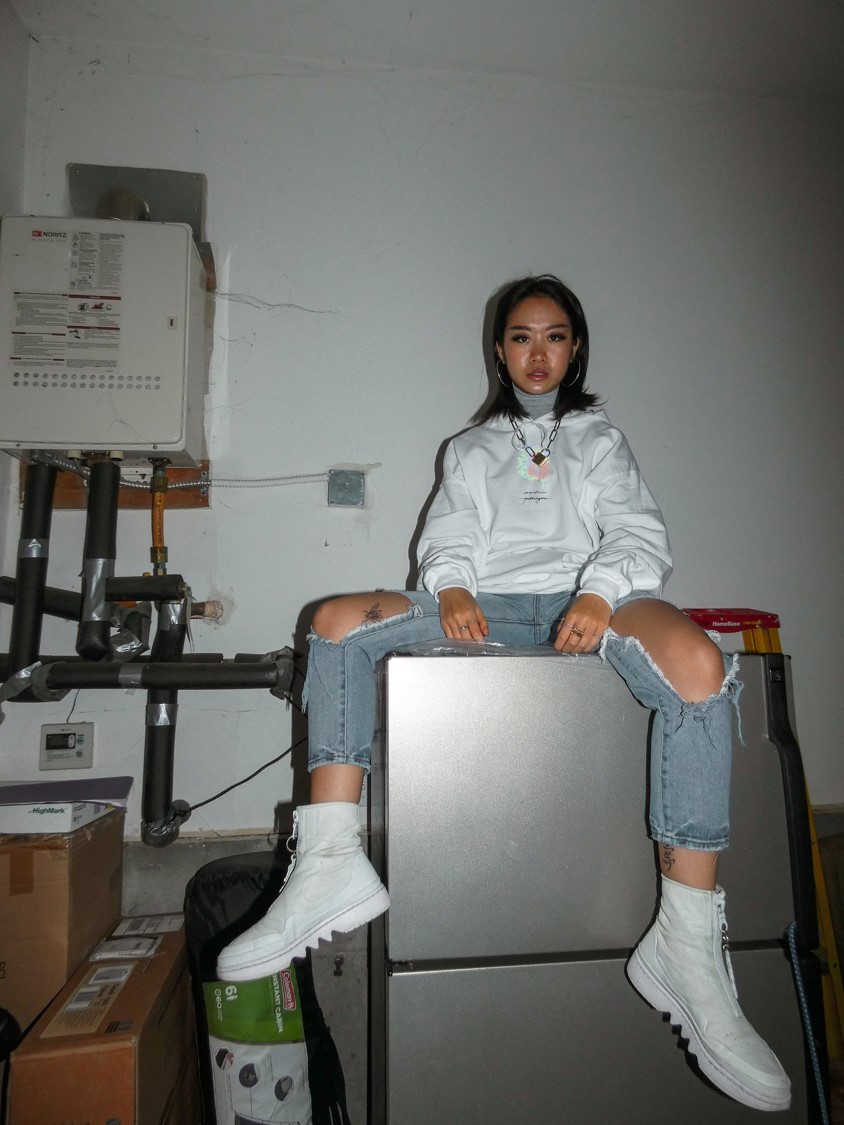 Chen cites the dominance of Western silhouettes in mainstream fashion is one example of this regime, as reflected in the global standardization of Western business and evening attire. She points to ubiquity of the three-piece suit as well as Parisian-style dressmaking as exemplifying these aesthetic hegemonies in the modern day.

“Western business attire is a standard of any professional practice — why is that?” Chen asks.

“The fashion industry is such a site of disgusting racism and cultural appropriation,” says Chen, citing as examples white celebrities wearing dreadlocks and the fetishization of the traditional Chinese qipao dress. Particular communities that inspire fashion designs often do not enjoy the profits from their sales. Leung echoes this sentiment: “There’s so many people involved in this process that are forgotten about.”

To mitigate this exploitation, Bodhi Parts hopes to engage in “ethical consumption.” For Chen, this means choosing designs that don’t tokenize cultures, committing to rerouting some profits to communities in need, and sourcing production from a Pakistani company she says is “environmentally sustainable and socially sustainable.”

But Chen also recognizes that ethical consumption can sometimes run contrary to accessibility. Chen says the brand recognizes the challenge of working “within a capitalist market system and needing to think about the sustainability of the business practices that we’re doing, and also simultaneously having a very insurrectionary, revolutionary spirit.”

Christian P. Lansang, a law student at the University of Pennsylvania who helps with the business side of the company, believes this tension can be reconciled. “Something good about having a motivated, mission-oriented team is that we’re really willing to be super nimble with the business model of each specific drop that we do.”

The empathy hoodie’s steep $60 tag, he says, is only priced as such to provide as much immediate support as possible for relief efforts. He points to the brand’s “nostalgia crewneck,” which is priced on a sliding scale, above a base fee to cover the cost of material. The “HRVRD”-embroidered crewneck has a suggested price of $80, but allows customers to pay what they can, as long as it is above the minimum of $30.

Beyond the financial, Lansang recognizes that Bodhi Parts is unique in explicitly combining fashion with social change — and in using terms like “material and aesthetic hegemonies.” The brand’s website features a “Manifesto” page, which outlines ten demands, above a graffitied photo of Michelangelo’s David. One demand states: “We will murder a Michelangelo. We will make a Frankenstein from it. We will graffiti it and then we will give the finger.”

Scrolling through the page feels like happening upon some kind of performance art. Chen explains that at the outset, “the creation of this brand was very much a performative thing for me. I wanted to make a statement.”

Despite the highly academic language of the brand’s mission, Lansang hopes it will still be accessible and attractive to consumers. “Language that we’ve deliberately chosen to use on the website can hopefully be articulated and communicated in a way that’s not speaking from an ivory tower and comes out in our work — that we actually do care about the people that we write about, and that we design clothes that are inspired by these communities,” he says.

As of a week after the empathy hoodie’s release, the brand is hopeful. “It’s always tricky to get sales, but given where we are and where we started, we’re very happy with the response that we’ve seen so far,” says Lansang.

For Chen, the social theory language in the brand’s mission comes from her own creative process. “It made a lot of sense for me to be using language that rendered this project as a whole as an act of poiesis for myself,” she says.

Tentatively, the brand hopes to release an Asian-American-inspired collection in the future, although none of the designs have been finalized. They’re thinking about rerouting some profits from that collection to anti-gentrification and arts efforts in Boston and San Francisco’s Chinatowns. At the same time, “I do want to note that we don’t want this just to be an Asian brand that is dedicated towards an Asian audience,” Lansang says.

Chen admits it is difficult to represent culture in her designs while avoiding the appropriation the brand protests against. “I’m not sure if there is a good answer or if there’s ever going to be a good answer to how I can produce Asian American things without self-Orientalizing, because I think that there is something about the subject position of being Asian American that will make every creative production, everything that I make subject to a certain kind of Orientalism when subjected to the white gaze.” One solution she is considering is placing traditionally Asian motifs in new spaces, such as designing qipao-inspired evening wear to challenge the dominance of Western evening wear.

The brand’s name, Bodhi Parts, comes from a Chinese translation of a Sanskrit word meaning “enlightenment,” a concept central to the Buddhist tradition. “I definitely grew up in a cultural Buddhist background,” Chen says. “And one of the things that my parents constantly said to me that I loved was that breaking something would release you from a future trauma.”

— Magazine writer Maliya V. Ellis can be reached at maliya.ellis@thecrimson.com.