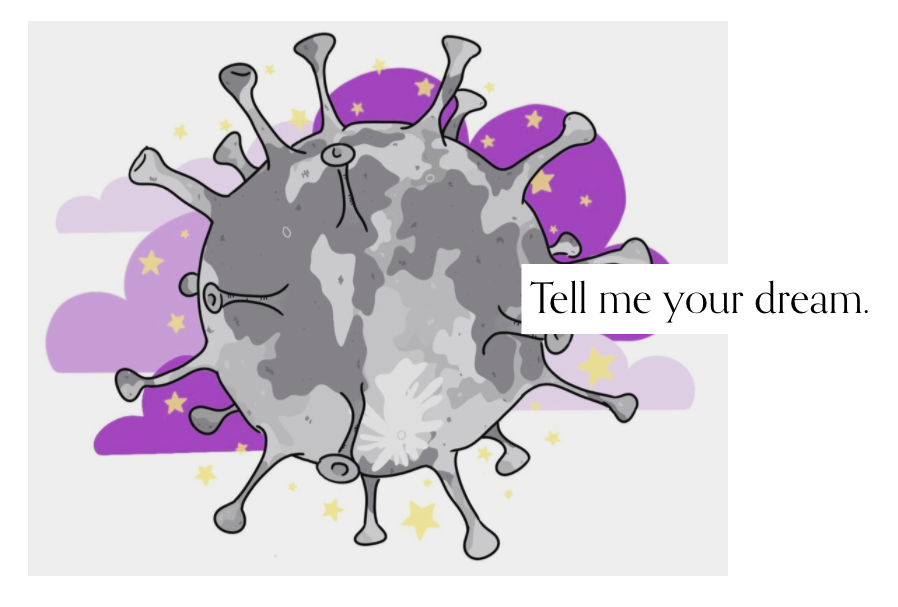 Erin and Grace Gravely, two sisters from California, have created idreamofcovid.com, an impromptu, literary magazine-esque website where people can read other people’s dreams and submit their own.
Advertisement
Advertisement

As the future becomes less certain, our sleep is becoming increasingly animated by quarantine-related dreamscapes.
By Anna Kate E. Cannon

Four weeks into quarantine, my dream self boarded an airplane.

I didn’t know exactly where I was, or which school I had just been kicked out of. All I knew was that I had been forced to leave campus because of COVID-19.

I was walking past the flight attendant to board the plane when she began to scream. Her voice echoed through the airport as she waved her arms in anger, foam gathering at the corners of her lips: Nobody else would be allowed on;more passengers would make it impossible to social distance on the flight. I had just made it.

The plane appeared military-cargo grade, with thick netting hanging from the ceiling and ramshackle seating too close together. Rows and rows of angry people, sporadically seated in the half-empty plane, shouted at their seat mates for breathing.

They turned to follow me with their eyes as I passed, unmasked faces twisted in jealousy, some licking their lips. I was wearing a mask; they were not.

Before I slept that night, I told a friend that the first thing I wanted to do when all of this blew over was to travel somewhere. Maybe my hellish dreamscape is a harbinger of what air travel will look like. Maybe not.

As the future becomes less certain, our sleep is becoming increasingly animated by quarantine-related dreamscapes.

Deirdre Leigh Barrett is an expert on dreams during crises. An assistant professor of Psychology and Psychiatry at Harvard Medical School, he set up a survey to collect dreams related to the COVID-19 pandemic soon after the United States started to close down. When we spoke over the phone in mid-April, she had collected roughly 5,000 dreams from 2,300 people.

Barrett’s book “Trauma and Dreams” includes dreams she collected from Kuwaitis after the Iraq invasion of 1990 and from Americans after the Sept. 11 terrorist attacks. Many of the dreams feature strong visual elements: In the wake of 9/11, people dreamed of plane crashes, buildings falling down, hijackers with knives, images they had seen on television. But during the COVID-19 crisis, where the “enemy” is invisible, metaphors take over.

“Within the metaphoric dreams, the biggest sub-cluster is dreaming about insects. I’ve seen just about every kind of insect,” she says. “Swarms of flying insects coming at the dreamers, cockroaches running at them, masses of wriggling worms. There was one with a grasshopper with vampire fangs. I think that’s maybe the most common because we use the word bug as slang for having a virus.” Barrett has also seen an uptick in dreams about natural disasters — tidal waves, earthquakes, and fires — which are common among people who have lived through catastrophic events.

Dream collection isn’t confined to scientific work — Erin and Grace Gravely, two sisters from California, have created an impromptu, literary magazine-esque website where people can read other people’s dreams and submit their own.

When you first load idreamofcovid.com, you’re greeted by a cartoonish, black-and-white illustration of the COVID-19 virus itself, hovering before a background of pastel purple clouds and yellow stars like a character from a morbid children’s book. Superimposed over the virus are the words “Tell me your dream.” in a pleasant, Georgia-esque font, below which awaits the submission form. Erin goes through 50 to 100 submissions per day, and Grace illustrates the ones that Erin selects – about ten percent. The final products live on a black-and-white homepage decorated with drawings of inanimate objects.

Erin was partially inspired to create the site by a book she read last year, “The Third Reich of Dreams.” The book — out of print and currently listed for nearly $2000 on Amazon — was published in Germany in 1966 by Charlotte Beradt, a Jewish journalist who had secretly collected about 300 dreams from her friends and neighbors in the years following Hitler’s rise to power. Barrett — the Harvard Medical School professor — also mentioned “The Third Reich of Dreams” during our conversation, citing it as one of the largest historic collections of trauma dreams.

Around the same time that Beradt was collecting dreams, so was Major Kenneth Hopkins. Hopkins was a doctoral student in psychology who was captured and held in a Nazi prisoner of war camp in 1940. He collected the dreams of his fellow inmates, 640 in total, planning to finish his dissertation when he was freed. He was never able to do so, however, because he died of emphysema in the camp in 1942. His dream-filled notebooks sat in the Wellcome Library of London, where Barrett found them in 2011. She and six other authors published a paper analyzing the dreams’ contents in 2013. While many historical archives contain some records of dreams, including individual dream journals, few of them are as extensive as Beradt’s or Hopkins’ work, and even fewer deal with dreams during large-scale trauma.

Some of the dreams collected during times like World War II and the aftermath of 9/11 were clearly related to the trauma people were experiencing at the time — but many others were seemingly random. Today, many of the dreams people are having appear to have nothing to do with COVID-19. The Gravelys have published dreams about goldfish, home invasions, Queen Elizabeth, and apartment showers the size of living rooms.

I don’t normally dream, but since being home in quarantine, I have dreamed almost every night. My dreams are vivid and storylike, often highly emotional. And apparently I’m not alone: lots of other people have reported unusually frequent and striking dreams since the pandemic started.

“last night i had a dream that my family was having a family reunion at this pond and i created a skinny e boy bf for myself who i’ve never seen before,” a friend from home texted me. “i wanted to drink a lot of beer but i was hiding it from my family and i told my bf that once i got drunk we could make out but after that he disappeared.” After I responded, “nice,” she texted back: “i miss him already.”

The dreams I heard about while researching this piece ranged from mundane to fantastical. My blockmate was scratching a lottery ticket on the floor of a train and woke up right before she saw how much money she had won. A friend of a friend dreamed about yelling to his dad about it being “absolutely essential” that they subscribe to the Fiona Apple Streaming Service. A freshman friend dreamed that she attended Humanities 10 on a cruise ship on Lake Michigan and accidentally took Louis Menand’s seat, but someone thought she was Louis Menand because she was wearing a cool blazer.

Barrett theorizes that people who are “normally a little sleep deprived” are catching up on sleep and therefore entering more phases of rapid eye movement (REM) sleep each night. According to Patrick J. McNamara, dreams occur in all phases of sleep but are much more “vivid and story-like” when they take place during REM sleep. McNamara, an associate professor of neurology and a sleep researcher at the Boston University School of Medicine, explains that it’s also much easier for someone to remember a dream when they wake up from REM sleep, which happens more often when waking up naturally rather than from an alarm.

Dreamers and dream collectors alike have noted an uptick in anxiety- and fear-based dreams, some of which are directly related to COVID-19 and many that are not. The Gravelys have been keeping track of dream subject matter by essentially creating word clouds, where words appear larger the more times they come up; the word “anxiety” is the largest of them all. Many of Barrett’s respondents dream about themselves or their family members contracting coronavirus, being watched by colleagues or strangers on Zoom, or being coughed on by crowds not wearing masks.

A friend of mine dreamed that she was running from a man in the woods and finally escaped to a main road, only to realize that he had been following her with a drone and was going to find her. Another friend from home dreamed that she wound up naked at a party. One night I dreamed that I was swimming in a deep, dark ocean, next to a massive sunken structure that was blocking my only way to the surface; I could see the bottom of the structure but not the top, and I woke up as I was watching myself swim frantically upward, soon to run out of air.

“With respect to COVID, what we’re getting is a lot of what we call anxiety dreams,” McNamara says. “The neurobiology of REM is specialized to handle intense emotions... So what you get going on in a REM episode is a disinhibition of emotions. Every emotion you experience is more intense in REM sleep.”

Based on the dreams collected by people like Barrett and the Gravelys, some people are having worse anxiety dreams than others.

“[Health care providers’] dreams look like classic post traumatic nightmares,” Barrett says. “They’re much more literal than the other people’s dreams, and they do have visual images for them. They know what it looks like to watch someone dying on a respirator. And so they dream about being at a hospital taking care of a patient who’s dying and they’re desperately trying to save them and something goes wrong.” One idreamofcovid submission is from a Chicago ER nurse, who dreamedt that they incorrectly tested an immunocompromised patient who died before realizing their mistake. In another from a resident physician in Texas, all of the hospital’s personnel were herded into a large room to be infected with COVID-19 so the struggling hospital could collect the insurance money from their treatment.

I sit on the floor between my seats with my seatmate, who I think I might know, until the flight attendant comes back and laughs at us for sitting on the floor. Her laughter is forced, a little too loud to hide what might have been nervousness, and she tells us to prepare for landing. But we don’t land; I watch from outside the plane as we shoot straight up, chased by some entity that barrels through the clouds behind us. Although I am watching from somewhere in the sky outside, I can still feel myself on the plane, can hear everyone on board screaming.

As our pursuer grows nearer, I feel the plane’s engine start to wane. For a moment we hang suspended, vertical and dead in the air, until the entire plane bends in half, fluidly, like a diver reaching an apex, and then starts to plummet.

While we fall, reaching terminal velocity in a dead cargo jet, I start to realize that everything is going to be okay. We begin to slow as we get closer to the ground, our curve leveling like a car at the end of a roller coaster hill. We at last come to a stop in a swampy area, the plane suspended in a pond surrounded by thick trees and the sounds of chirping cicadas. In the middle of a calm water evacuation, where everyone mills about in the waist-deep pond, someone brings out a tea set. The sun is setting over a nearby ridge as we crowd together around the porcelain.