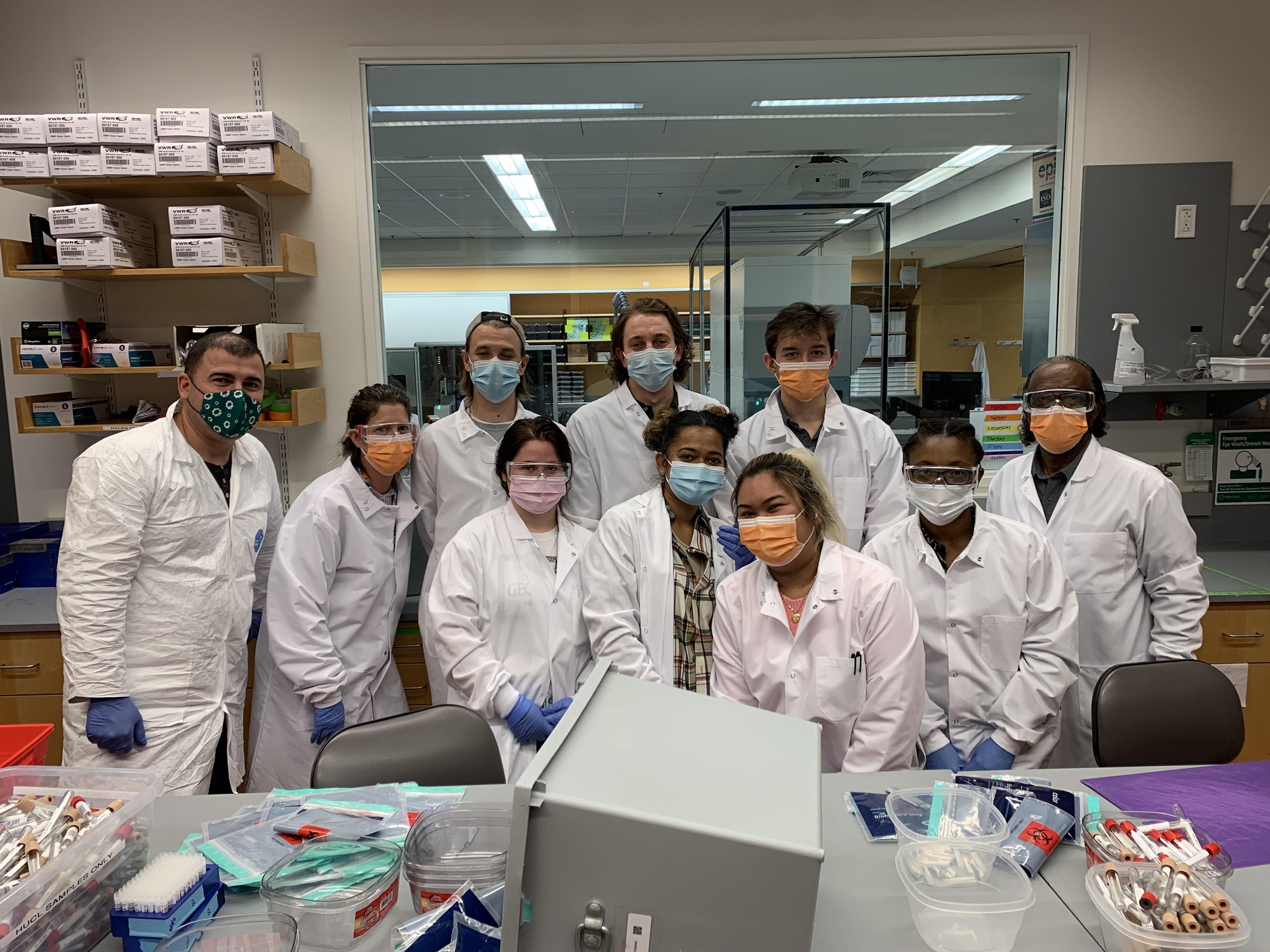 The Journey of a Covid Test

While many colleges have implemented regular testing as part of their reopening strategies, Harvard has gone a step further in establishing a self-sufficient testing site at the Harvard University Clinical Laboratory.
By Amulya S. Garimella and Amber H. Levis

A swab up the nose, a drop-off in a little gray box, and, some hours later, a text declaring the sample (hopefully) Covid-free — this is the greatest extent to which most Harvard students, workers, and faculty engage with the University’s Covid-19 self-testing program. But in the hours between the drop-off and the little ping of a notification, a complex system powered by dozens of people working from dawn to dusk sustains Harvard’s return to campus .

While many colleges have implemented regular testing as part of their reopening strategies, Harvard has gone a step further in establishing a self-sufficient testing site at the Harvard University Clinical Laboratory.

The HUCL testing initiative has been in place since spring of this year but only began to operate at full capacity this fall. Shortly after nearly 23,000 Harvard students and affiliates flooded onto campus in early September, Harvard scaled its undergraduate testing protocol up from once per week to three times per week after an initial spike in cases. Suddenly, the labs went from testing 5,000 samples per day to 50,000. Following the increase in testing cadence, the rate of daily positive cases has dropped from 0.3 percent to 0.07 percent as of the Thursday of publication. Michele A. Hope, a laboratory manager at HUCL, attributes the success of this transition to Harvard’s contingency planning — how the University handles spikes in cases — and to the dedication of her team.

The lab collects and tests Covid-19 samples around the clock, working meticulously to deliver results quickly. The day starts just before nine in the morning, when Harvard Mail and Print Services drops off the first round of tests. In order to send back results within 24 hours, the tests are processed with assembly-line efficiency: Groups of technicians store, sort, rack, and log each sample even before they enter the lab. Inside the lab, other technicians inactivate any potential live virus in the samples and set up the actual tests, working until the lab closes at 11 p.m. The fast-paced environment requires workers to constantly adapt to new challenges, such as equipment failures or a temporary reduction in staff due to sick days. “It’s very rarely a perfect day where everything goes fantastic,” Hope says. “I think people who work in labs like that environment. Every day is a little bit different because it’s a new challenge.”

The lab tries to anticipate these obstacles when it can. HUCL works closely with Harvard’s medical advisory board, the committee responsible for the changes in Harvard’s Covid safety protocols. Extensive contingency planning prior to this fall’s return to in-person learning prepared the lab for full-capacity testing, but the sustained rush of tests still proved to be a challenge. “We were prepared for that initial surge,” says Hope. “I think what we weren’t prepared for was sustaining that volume.”

To maintain efficiency at this unprecedented level, the lab works with the Harvard administration to expand its staff, purchase additional equipment, and coordinate shifts effectively to avoid overworking employees. To further manage the high volume of tests, some are sent to a lab at the Broad Institute, which is run jointly by MIT and Harvard..

In preparation for students’ return to campus, the lab needed to adapt. “Once we knew that testing cadence was going to change, we started pulling levers to really do some more long-term planning around that volume level,” Hope says. Even in light of Harvard’s recent scaling down of testing from three to two times per week, Hope adds that another surge could come at any time, especially considering the upcoming holiday season. It has ceased being a question of if another spike in positive cases will come — it’s a question of when.

There is certainly a level of stress that comes with doing this work. “There’s always pressure around the fact that the sample that you receive in your hand belongs to a person who’s waiting for a result,” says Hope. “In this case, it’s a result that’s important to prevent the spread of Covid throughout the Harvard community.” But it’s this pressure that also motivates Hope and her team.

After all, throughout the rollercoaster of the pandemic, only one thing has remained constant for the lab: “an understanding that we do have an impact on the community.”