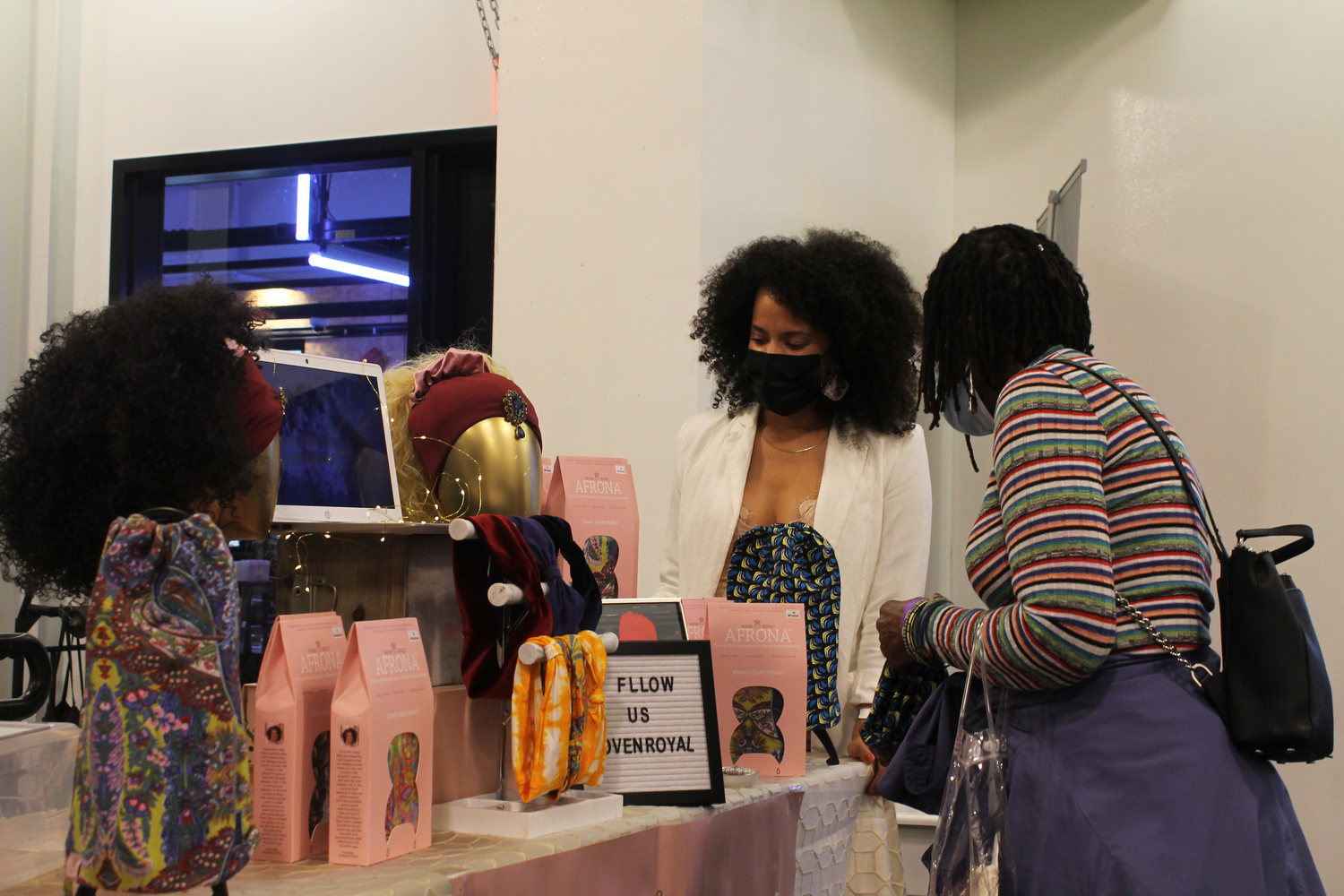 Charlene M. Pena (left) speaks with someone beside the Woven Royal display table at Soulfully Textured. Pena, the founder of the Massachusetts-based company Woven Royal, was one of the vendors at the event. By Sophia S. Kim
Advertisement
Advertisement

The event hall smells like a Black-owned beauty supply store: the distinct and complex combination of lavender, hibiscus, argan oil, shea butter, and coconut oil. Black women roam the event hall, sporting curly hair of all different textures and styles: One woman in her late 20s with kinky curls forming a tight afro, another with bright red locs that can’t be missed, another with a slicked back ponytail, and little girls running around with pigtail braids and twists with bright-colored beads. This array of hairstyles have gathered on Oct. 16, for “Soulfully Textured: A Natural Hair Experience.”

Nike Okediji, the event’s creator, deliberately chose District Hall in the Seaport District of Boston to house her event. She wanted to hold it “in a white space, so they can see us all coming together to celebrate ourselves,” rather than have it in traditionally Black areas such as Randolph or Dorchester. In doing so, Odkediji pushes the idea that natural hair isn’t political in Black spaces, but is in white spaces.

Professionalism and respectability politics tell Black people that they must behave and present themselves in accordance to standards set by white supremacy. This often manifests as code-switching or changing one’s demeanor and language in order to fit the dominant culture, ultimately serving to make white people more comfortable. For Black women in particular, these Eurocentric norms heavily affect beauty standards, especially with regards to hair. Perms and relaxers chemically damage one’s hair, stripping one’s curl pattern and straightening their hair; these practices have been normalized, however, because they bring Black women’s hair closer to a European beauty ideal. As a result, wearing natural hair is not just as an aesthetic choice, but rather an act of resistance and rebellion.

Okediji feels that when people see her with her natural hair, they assume she’s making a political statement. In reality, she simply appreciates the beauty of natural hair. “I just feel I should be able to just wear what grows out of my hair,” she says. She explains the dangers of the chemicals and toxins Black people put into their hair in order to change its natural texture, stating that wearing one’s hair naturally is “not a political choice, it’s a health choice.”

In turn, Soulfully Textured reflects an effort to create a space where Black people can come together and find the “empowerment in loving your authentic self,” exploring the power of embracing one’s naturally textured hair in a society that tells them to do the opposite.

The event boasted a wide variety of vendors, offering everything from natural hair and body products, to art and clothes. There was also space to facilitate conversation, including a screening of the movie “Back to Natural” and a workshop with the film’s director, Gillian Scott-Ward. Visitors could also discuss the CROWN Act, a bill that would prohibit both race-based hair discrimination, as well as the denial of employment and educational opportunities because of hair texture or protective hairstyles. 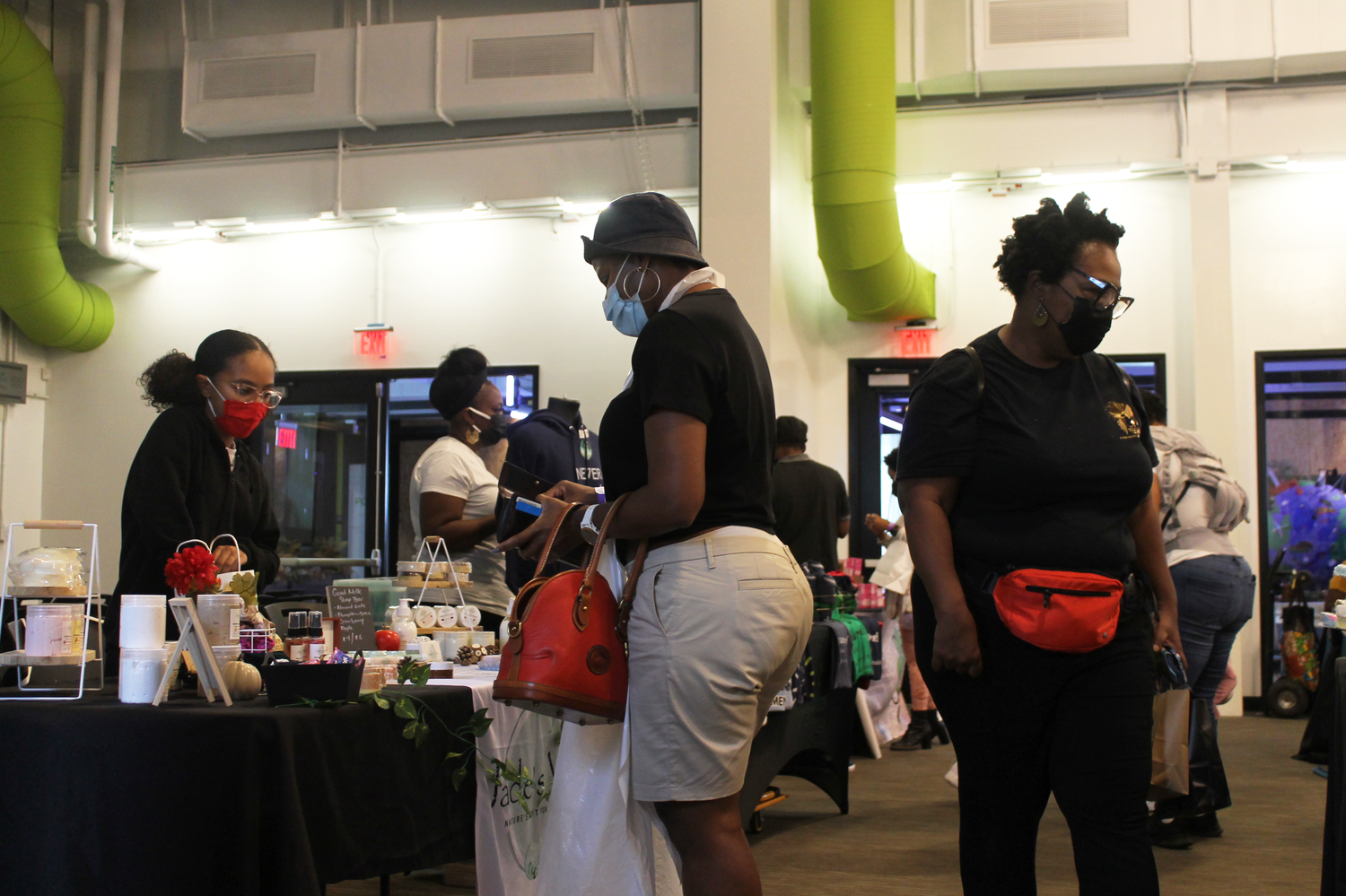 Vendors display their products for attendees at Soulfully Textured. The event took place at District Hall Boston in the Seaport District. By Sophia S. Kim

Okediji is wearing all-black with gold accents; her bouncy curly hair and joyful presence create an unapologetic demeanor that appears effortless. Yet, she struggled to embrace her natural hair, and struggled even more finding a community that would support her in the journey. “When you’re out in the community living your natural hair, I still feel like people aren’t used to that,” Okediji says, speaking to a room of women — one that she facilitated — where everyone has natural hair. Although Okediji experienced her own hardships, she now paves the way for younger generations, helping them avoid the arduous process of learning to love one’s natural hair. Rather, she is creating a culture where embracing your natural hair is inherent. Okediji twirls her curls as she expresses a need to “tap into the culture, but also just elevate the beauty of natural hair.”

When it comes to embracing natural hair, the choice doesn’t just fall on the individual; it is a broader question of the society they were raised in, representation they saw, and resources that they had access to. Widline Pyrame, however, is trying to diversify said representation through her doll company Fusion Dolls. The company focuses on representing natural hair, including styles ranging from afros to locs. “It’s really just embracing who you are and speaking out,” Pyrame says. “It’s okay for you to be yourself. Because all of us are unique in our own way.”

For Black people, this visibility is often difficult to find. But events like Soulfully Textured are essential to showing people, particularly those in predominantly white spaces, that Black people should be accepted as their natural selves.

The event constitutes only one step toward depoliticizing and normalizing natural hair. Natural hair has been increasingly featured in many commercials and fashion magazines, but their presentation of natural hair often feels superficial and commercialized, rather than something that can be practiced on an everyday basis. The path to progress is not through commercialization, but through changing our language and views surrounding natural hair in our daily lives.