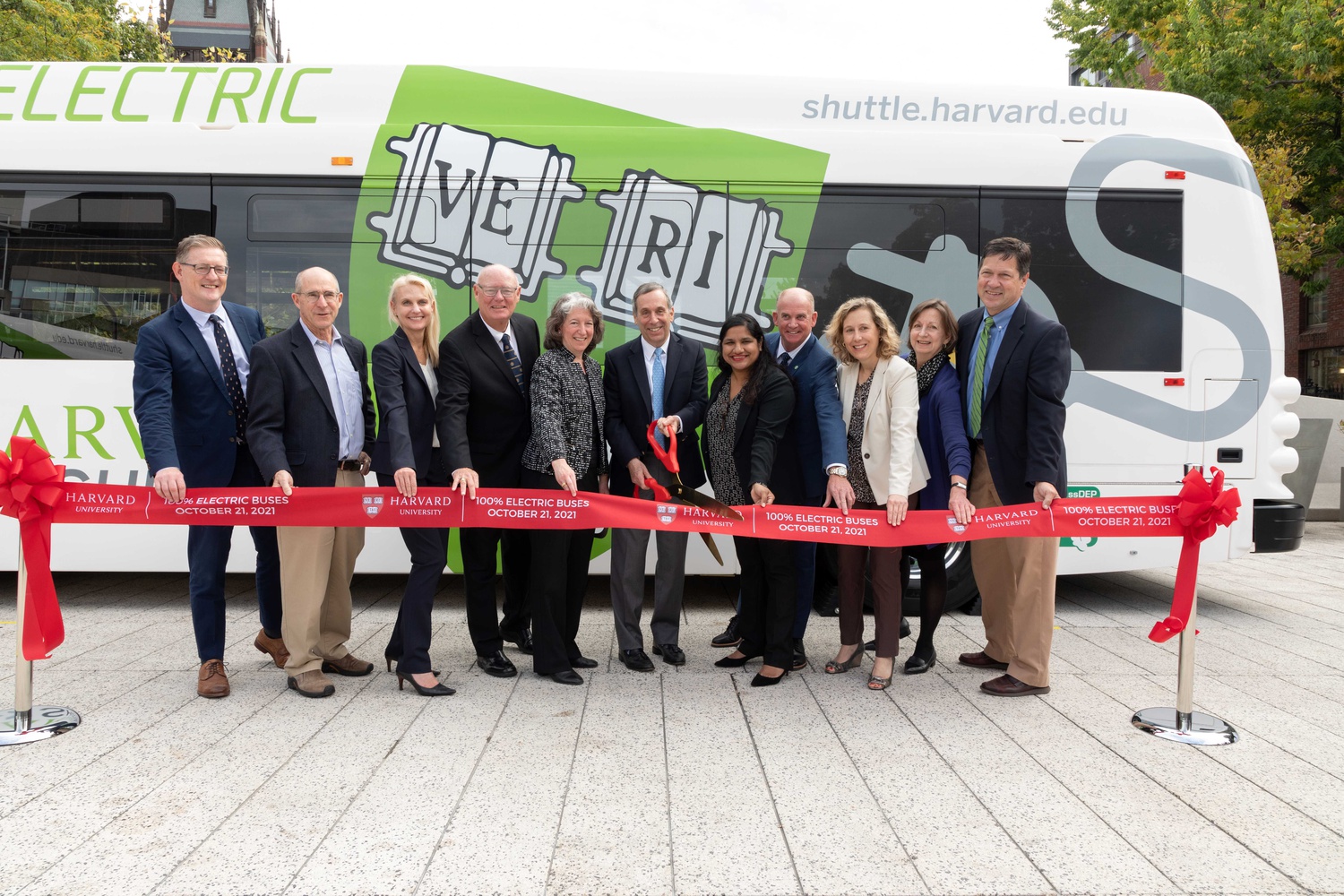 The shuttles, which the University purchased in February to reduce its use of fossil fuels, will replace four bio-diesel buses that make up more than 30 percent of the bus fleet at Harvard.

The performance of the new shuttles — manufactured by Proterra, an electric vehicle technology company — will also inform future efforts to electrify transportation services across the University.

In an address at the ceremony, Bacow noted that Harvard has both “special burdens” and “special responsibilities” when it comes to its role in creating a sustainable future.

“​​We are excited by the opportunity that we have to make a difference here at Harvard, to see our campus as a living laboratory where we can both experiment and demonstrate best practices,” he said.

At the event, Siddiqui discussed climate change on both a global and local scale, including flood maps that predict large portions of Cambridge will be underwater in 2070.

“The news that the climate legislation coming out of Washington will not be nearly strong enough, it's easy to feel overwhelmed,” Siddiqui said. “It's a reminder that no one is going to solve this problem for us. Cambridge must lead.”

Harvard’s shuttle bus fleet has an annual ridership of about 600,000 across its campuses, per a press release from Harvard Campus Services. The eventual electrification of all its buses is expected to lead to annual reduction of more than 220,000 pounds of greenhouse gases and other air pollutants.

In addition to lowering emissions, several speakers at the ceremony highlighted the impact of electrification on air quality and noise pollution.

“It's just better for everyone — less air pollution, less noise pollution — and believe me, in elected government, we get a lot of complaints around pollution,” Siddiqui said in an interview following the event. “I have so many complaints right now around noise pollution and specifically Harvard buses so this is great that Harvard is actively doing this.”

The Massachusetts Department of Environmental Protection helped fund the four electric shuttles with a $500,000 grant — part of a larger $7.5 million in funds to support nearly 100 similar projects across the Commonwealth, per a press release. A loan from the Harvard Green Revolving Fund also funded the electric charging infrastructure for the buses in Allston.

“The transportation sector accounts for 42 percent of the greenhouse gases that are emitted in Massachusetts,” Mass. DEP Deputy Commissioner Stephanie Cooper said in her speech. “This is a really important sector for all of us to do everything we can to reduce carbon pollution.”

These four electric shuttles won’t be the last for the University.

As a member of Recharge Massachusetts — an initiative that supports state organizations that use zero-emission vehicles for their operations — Harvard has pledged to implement a zero-emission vehicle action plan that includes replacing bio-diesel powered buses with 100 percent electric ones.

After the event, the sight of the buses parked on the Science Center Plaza piqued the curiosity of students who were travelling between classes.

“I was just out walking and I saw this and I think it's definitely overdue in terms of what Harvard should be doing,” Emmanuel C. Ngbemeneh ’22 said. “We share a lot about how we are producing more technologies and being more environmentally friendly, and I'm actually glad that we’re basically putting our money where our mouth is.”