The meeting comes as Tishman Speyer is soliciting public comment on the project notification form they filed with the Boston Planning and Development Agency for the ERC on Feb. 2. The feedback period will close March 15.

The ERC, per the developer’s updated filings, will span six acres and include a hotel, a conference center, and two acres of greenspace. Tishman Speyer is aiming to break ground on the development’s main buildings in early 2022, according to the plans.

Jessica Hughes, director of Tishman Speyer’s Boston operations, said the ERC will consist of two phases, A and B.

Phase A will comprise 900,000 square feet, and, per Hughes, will contain 70 percent commercial and 30 percent residential space. The “heart” of Phase A, she said, is the greenway, which would provide “two times the space” than originally presented in a 2018 development proposal.

By contrast, Phase B would span nearly 1,000,000 square feet. Though “not part of the scope of the proposed project at this time,” this phase would “eliminate” planned surface parking lots and instead focus on creating open space, per Hughes.

“Our vision for Phase B is to give the same high priority as our phase A plan to the creation of community open space that will ultimately connect Rena Park and Soldiers Field Road with a continuous greenway,” she added. 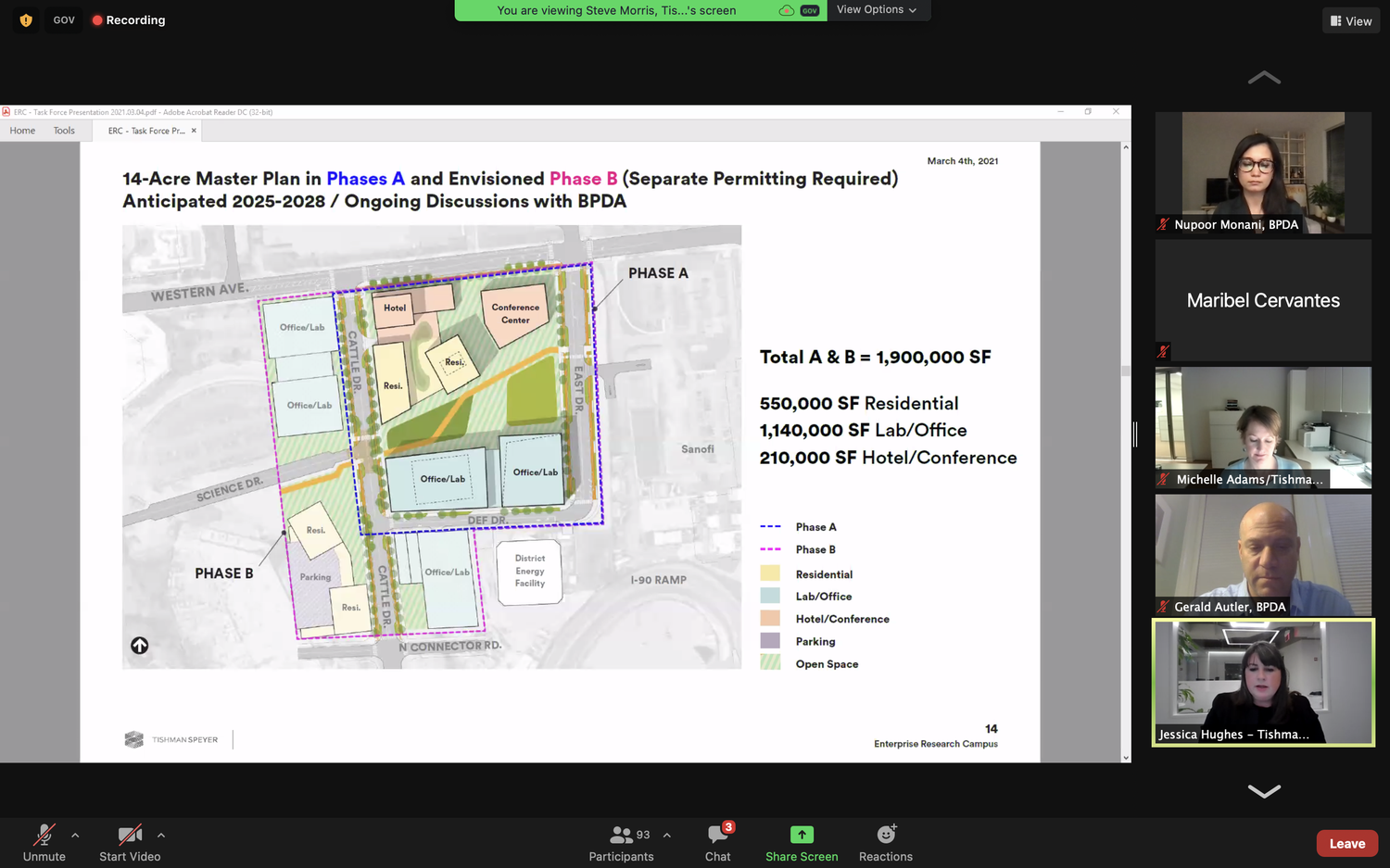 A diagram of Tishman Speyer's plans for the Enterprise Research Campus displayed during a meeting Thursday evening. By Maribel Cervantes
Advertisement

Jeanne Gang, founder of Studio Gang, said in order to ensure the sustainability of the project, the developers will consider the ERC’s layout so it is as energy efficient as possible.

“We’ve been working on sustainability from the very beginning, and it’s about how we scale and place our buildings in relation to the solar orientation to reduce energy use, and how we consider embodied carbon and manage operational energy,” she said.

Gang also said creating an ERC that is well-connected with the vicinity and encourages Allstonians to engage with its amenities is a priority.

“We’re really dreaming of an ERC that contributes to Allston’s unique character and exciting street life — with a pedestrian oriented environment — and that brings activities and climatic comfort every season,” she added.

Hughes stated that Tishman Speyer is committed to diversity, equity, and inclusion initiatives and will subsidize ground floor retail space for local businesses owned by women or minorities.

“We'll be doing a significant amount of outreach,” Hughes said. “I think we look at it as a combination of spaces, they’ll be, you know, permanent spaces pop up spaces, you know, test kitchens, that sort of thing where there’ll be a lot of opportunities.”

Ed A. Kotomori, also a member of the Harvard-Allston Task Force, said at the meeting that he would like to see rent subsidized to match 60 percent area median income to ensure that people in the neighborhood can afford to live there.

“We want to see not only an extension of 13 percent of IDP, but also an extension around the number, the percentage of affordability,” Barbour said. “If you can go from 50 to 60 to 70 to 100 percent so that there’s a mix of income, that’s really important.”

Anthony P. D’Isidoro, president of the Allston Civic Association and a local resident, said he was concerned about safe and equitable access to the ERC for low- to moderate-income residents, seniors, and those with disabilities.

“I have absolutely no confidence with the existing public transportation infrastructure in this site,” D’Isidoro said. “You’d be asking some people who really can’t walk that far or, you know, have accessibility issues, I think it’s almost like you kind of take them out of the picture.”

Gerald Autler, senior project manager for the BPDA, said that his agency and the Massachusetts Bay Transportation Authority understand the frustration with the current service and are discussing possible solutions, including working with Cambridge to better connect the area via bus routes.

“This team should be thinking long and hard about that, but it’s also part of this bigger picture, and we’re excited to hear more,” he added.