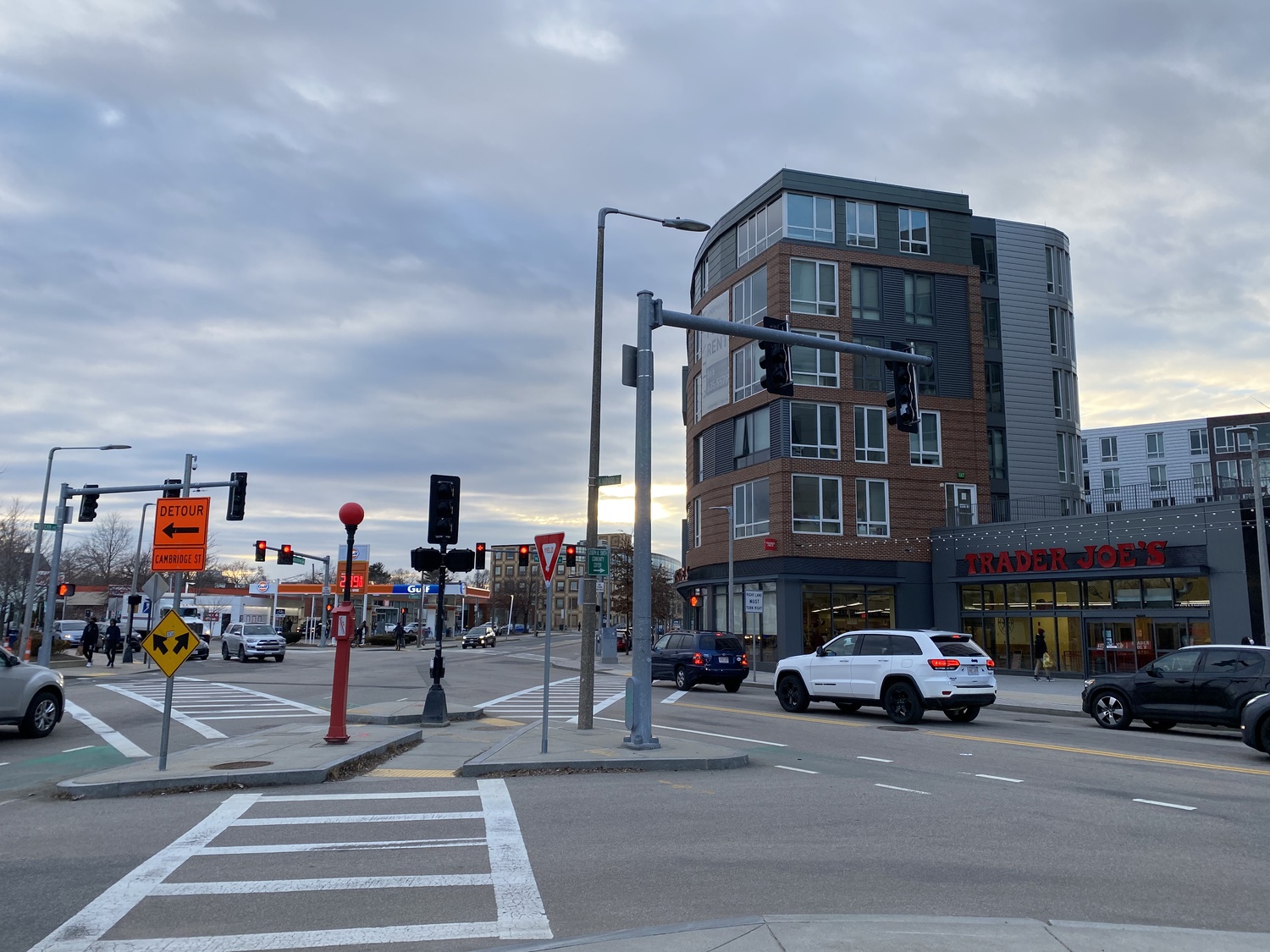 Barry's Corner is located at the intersection of Western Ave. and North Harvard St. in Allston. By Thomas Maisonneuve
By James R. Jolin, Crimson Staff Writer

As part of their third meeting together, the Harvard-Allston Task Force and the developers of the Harvard-owned land at 180 Western Ave. mulled the project’s public spaces and sustainability at a virtual meeting Tuesday.

Per the Boston Planning and Development Agency, the proposed seven-story development at Barry’s Corner will span 200,000 square feet — with 273 units of housing and space for ground-floor shops and restaurants.

The Harvard-Allston Task Force is a group of local residents and Harvard affiliates that meets regularly to discuss development projects in the area. Tuesday’s meeting comes two months after the task force’s last meeting, during which developers and stakeholders focused on the project’s access to green space and level of affordability.

On March 5, developer Samuels and Associates filed its project notification form with the BPDA, which is open for public comment until early April. This filing, along with the meetings with stakeholders, represents an important step the developers must take before seeking approval of their plans from the BPDA board.

Manfredi said the developers’ March filing stated the project will include “public realm all the way around the site” and expand the existing sidewalk to “17 to 21 feet.”

One alternative to that plan, according to Manfredi, is to increase the sidewalk space along North Harvard Street by 34 percent compared to the proposal in the project notification form. Such an alternative would open up the area planned as a “privatized café zone” to the public, Manfredi said. The plan would also increase the number of benches and allow for the planting of additional trees.

The other option the developers are considering is converting an area previously planned for private building amenities into public space along Bertram Street, which would increase outdoor space by 42 percent, according to Manfredi.

Residents of 180 Western Ave. would still have access to a rooftop gathering space on the second floor, he added.

Following Manfredi’s discussion of open space, Emily Paparella, vice president at Elkus Manfredi, outlined the developers’ plans around the sustainability of the project.

In addition to solar panels which will be installed on the development’s rooftop, residential units will rely on electricity for utilities, rather than gas, she said.

Per the developers’ slideshow, “all electric residential units” would result in a “27.5 percent” decrease in greenhouse gas emissions.

Task force member Christine A. Varriale pushed back on the developers’ “all electric residential units” plan, asking whether gas would still be the building’s main source of power as she said is the case at the nearby Continuum building.

In response to Varriale, Paparella said gas would heat the “common corridors” under the development’s current design.

Both Varriale and task force member Barbara Parmenter said they would prefer gas not be used as a power source at all.

Additionally, task force member Tim McHale said he hopes the developers will encourage more “cultural activity” in the development’s public spaces. He added that he would like to see a “lively community gathering spot,” which he thinks could be “the real signature for Barry’s Corner.”

Paula Alexander, a local resident who is not on the task force, expressed trepidation about the new activity the development would bring and said that a “seven-story-plus building looming over” Allston is “not something we want to see.” She added that she feels her concerns are being “ignored.”

“I’m tired of squeaking all the time,” she said. “But the squeaky wheel gets the grease, and I’m going to keep squeaking until I get some action.”

Part of the purpose for these meetings and public comment on the developers’ filings is to compile resident feedback that the developers will address in future filings, according to BPDA project manager Nupoor Monani.

“We’re creating a feedback loop,” she said. “[The developers] share something with us, which was the PNF, we collect the feedback from you all and our colleagues, give it back to the development team, and then they use that to send in another filing that answers the questions we are raising today.”

Tags
Harvard in the CityAllstonMetroFeatured Articles