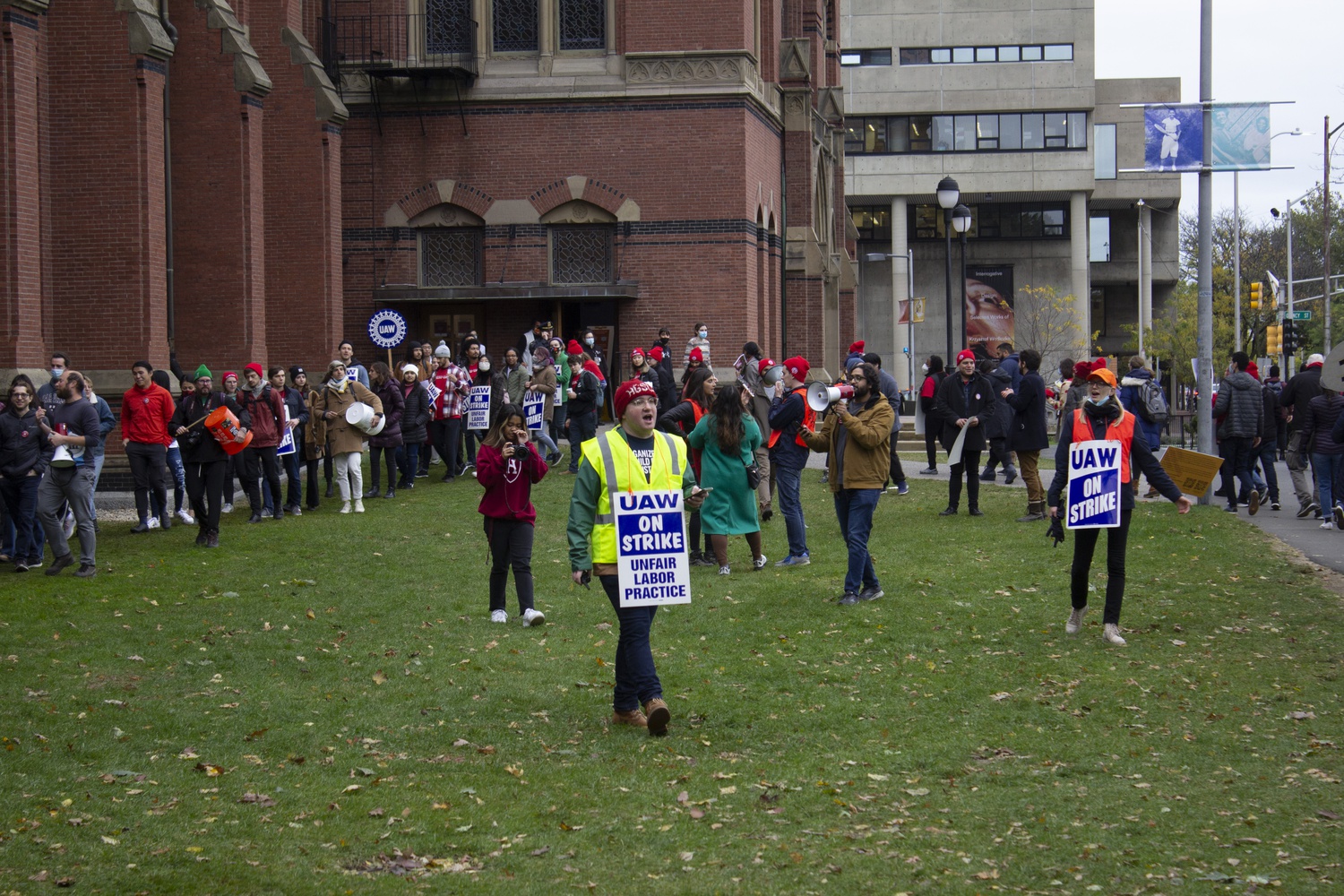 Bacow had barely begun his speech to freshmen and their parents for First-Year Family Weekend when Eshaan J. Vakil ’25 stood up and shouted, “President Bacow!” At least 40 students and their supporters followed suit, chanting for a “fair contract now” before walking out of the auditorium.

The walkout was organized by Student Labor Action Movement and Harvard College Young Democratic Socialists of America, two student groups that have been organizing in solidarity with Harvard Graduate Students Union-United Automobile Workers during its three-day strike.

The strike ends at midnight Friday.

“Hear me now,” Vakil shouted, with other demonstrators echoing him. “I am a first year. I stand with student workers, their working conditions, our learning conditions. None of us want abusers on campus.”

Some freshmen and parents who remained seated applauded the demonstrators as they exited. As chants faded, Bacow continued his speech, pausing only slightly to acknowledge the interruption.

“As I was saying, it’s a pleasure to be with all of you here at Harvard in person,” he said. “Let’s hear it for our students. A round of applause.”

According to Vakil, the group wanted to demonstrate against what they see as a lack of adequate pay and recourse for discrimination for student workers.

“We felt it was our moral duty to disrupt that speech because we need to show the world that this is not okay — this state of being and this situation where student workers and grad students and all workers at Harvard are being underpaid, and they don’t have any access to real recourse,” he said in an interview following the demonstration.

Jacob K. Ostfeld ’23, a member of YDSA, said the walkout was meant to inform parents of the union’s concerns. Ostfeld added that Harvard’s inaction at the bargaining table “forced” the demonstrators to take drastic action.

University spokesperson Jason A. Newton declined to comment on the walkout.

The event was only open to students and family members with badges for parents’ weekend programming, but the demonstrators collected the badges from supportive freshmen, distributed them to other undergraduates and graduate students, and worked out a script for the walkout, according to participants.

Katherine A. Cassese ’25, a member of SLAM, said she collected badges and wanted to join the walkout effort. She said she was “nervous” about possible disciplinary action before the event.

“I was so scared, but once it actually started and we started screaming, I was not nervous anymore,” she said. “I remembered why it was so important.”

While HGSU-UAW sanctioned and supported SLAM and HYDSA in coordinating the walkout, the union did not organize it, according to HGSU-UAW Trustee Andrew M. Bergman.

Parents attending Bacow’s speech said they were caught off guard by the protestors.

“It was a little startling at first because they started yelling and I was one row behind them,” said Melaine Osborne, the parent of a freshman. “But I get it. It was very strategic, and I get it.”

“I felt like the union handled it in a respectful way. They stood up, they made their point, and then they left,” he said. “But their point was obviously made clearly and forcefully, and everybody listened.”

Arya Kaul, one of the demonstrators and a Ph.D. candidate in the Medical Sciences, said he was “surprised” by some positive reactions from the audience.

“I think there was some confusion among family members about what was happening, and why a bunch of people were standing up and chanting,” Kaul said. “But, amazingly, I was surprised to see there was some applause, some support from family members in the audience who didn’t walk out with us, but wanted to offer their support.”

Vakil said he hopes the walkout will encourage other undergraduates to voice their opinions.

“What I hope is that more undergraduates who support the strike feel comfortable standing up and making sure that their voice is heard and that their thoughts are known,” he said.

After Bacow’s speech, Dean of the College Rakesh Khurana said in an interview that the demonstrators had a right to protest respectfully.

“They are supporting our community’s right to protest and then also to abide by the guidelines that we have for respecting people that are speaking, so always appreciate it when we are able to do both of those things,” he said.