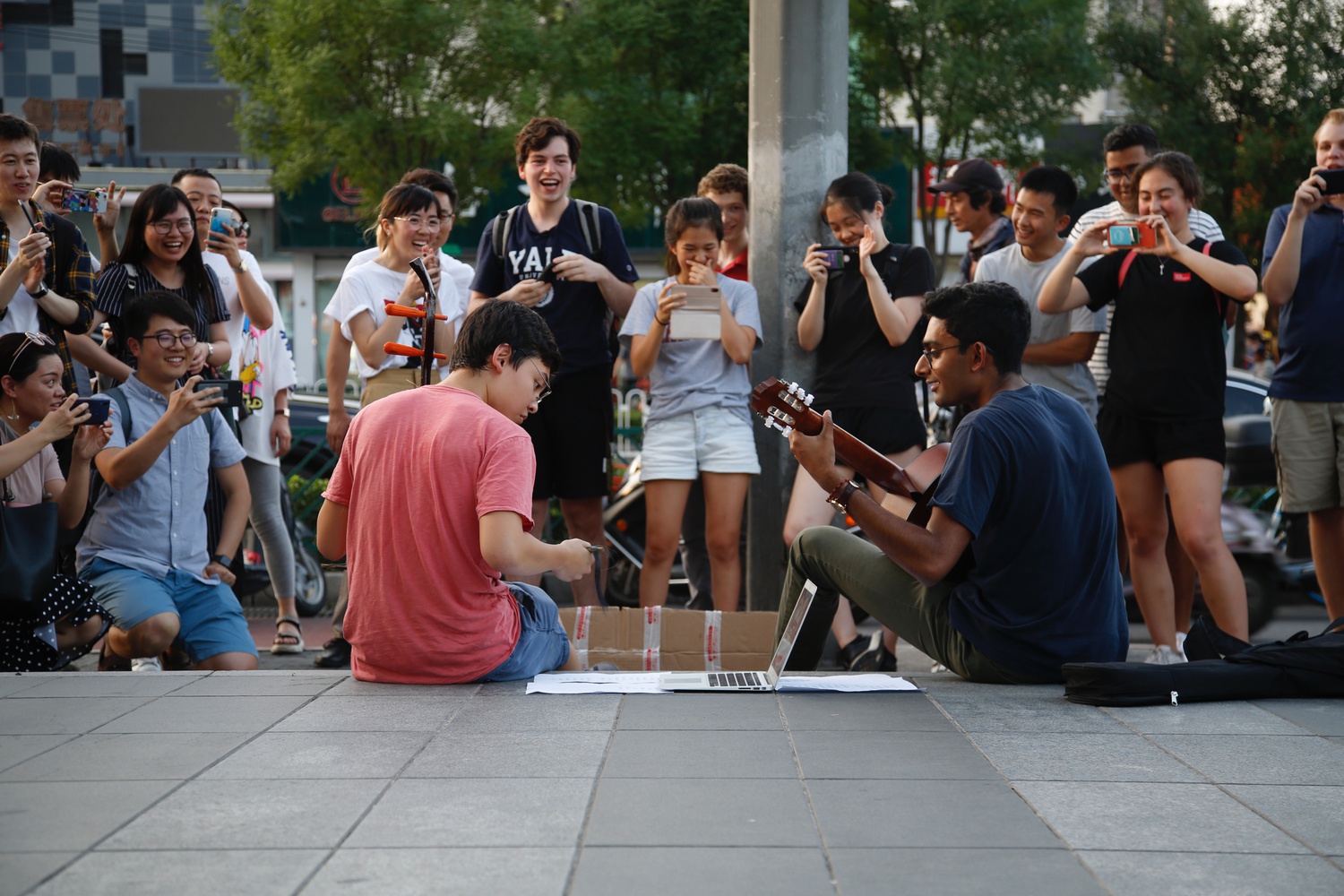 From singing Chinese pop songs to playing Mahjong to visiting the Great Wall, students in the Harvard Beijing Academy summer study abroad program have ample opportunity to explore Beijing while improving their Chinese. While these immersive experiences will continue, the program will move from Beijing Language and Culture University in Beijing, China to National Taiwan University in Taipei, Taiwan starting the summer of 2022.
By Io Y. Gilman and Isabel Wu

The sound of “Chong Ai” by TFBOYS fills up a Beijing mall plaza. Two Harvard Beijing Academy students – one on guitar and one on erhu, a traditional Chinese string instrument – are performing their own impromptu rendition. Other students gather around, cheering them on, trying to convince onlookers that they are American celebrities.

From singing Chinese pop songs to playing Mahjong to visiting the Great Wall, students in the Harvard Beijing Academy summer study abroad program have ample opportunity to explore Beijing while improving their Chinese. While these immersive experiences will continue, the program will move from Beijing Language and Culture University in Beijing, China to National Taiwan University in Taipei, Taiwan starting the summer of 2022.

According to Program Director Jennifer L. Liu, the program decided to move to Taipei due to a perceived lack of friendliness from the host institution, Beijing Language and Culture University. In recent years, the program began to have difficulties accessing the classrooms and dorms they needed. For instance, Liu noted that the BLCU did not provide a single dorm for all the students, instead requiring the program split the students into two different dorms of different quality, or to find a hotel that could keep their students together. “Given the condition they provided, we really couldn’t run the program with the quality that we are hoping to deliver to our students,” Liu said.

Liu suspects that the unwelcoming environment may be a product of a subtle shift in the Chinese government’s attitudes towards U.S. institutions, one precipitated by Xi Jinping’s rise to power. In past years, the program would typically host a small party to celebrate the Fourth of July, during which students and faculty would eat pizza and sing the national anthem.

However, in 2019, BLCU notified the program that it could no longer hold this holiday party. “We were told that our students we’re not allowed to sing, to celebrate,” Liu said.

BLCU did not respond to a request for comment.

While Liu can name one other previously Beijing-based institution that has since moved to Taiwan — a branch of the National Security Education Program’s Language Flagship Program — William C. Kirby, a professor of China Studies and Chair of the Harvard Center Shanghai, maintains that most Harvard-affiliated organizations are not moving away from China. Kirby argues that the Harvard Beijing Academy moved to Taiwan for purely logistical reasons, as Harvard broadly has been forming closer connections to China. He points to ongoing collaborations with Chinese academics in the Fairbank Center, the Harvard Kennedy School Asia Fellows Program, and the Harvard Center Shanghai, which has been running workshops and seminars, many of which were in person during the pandemic while other Harvard facilities were shut down.

“This is not a time in which this university is retreating from its engagement with China — it’s actually seeking every way possible to deepen it,” Kirby says.

With the move to Taiwan, the structure of the Harvard Taipei Academy has shifted slightly. Before, the program spanned nine weeks, with a week in the middle dividing two four-week terms for students to travel to other places in China for a research project. During her time, Ross travelled to Inner Mongolia and wrote a literary piece about commercialization in the area. Now, the program has been shortened by a week, so students will instead complete their research projects while covering course content.

Despite these changes, Ross believes the program will still be successful in Taiwan. Ross recommends the program, mentioning that the teachers she had and the immersion experience were “fantastic,” both of which will still be present with the new location. “It will be different, but I think people will like it a lot,” she said.

Liu is excited for students to explore Taipei, which she says has an interesting combination of modernity and tradition, and is still a great location to practice Chinese. Liu says, “No matter where the program is located, we are very confident that they will get the most out of it.”