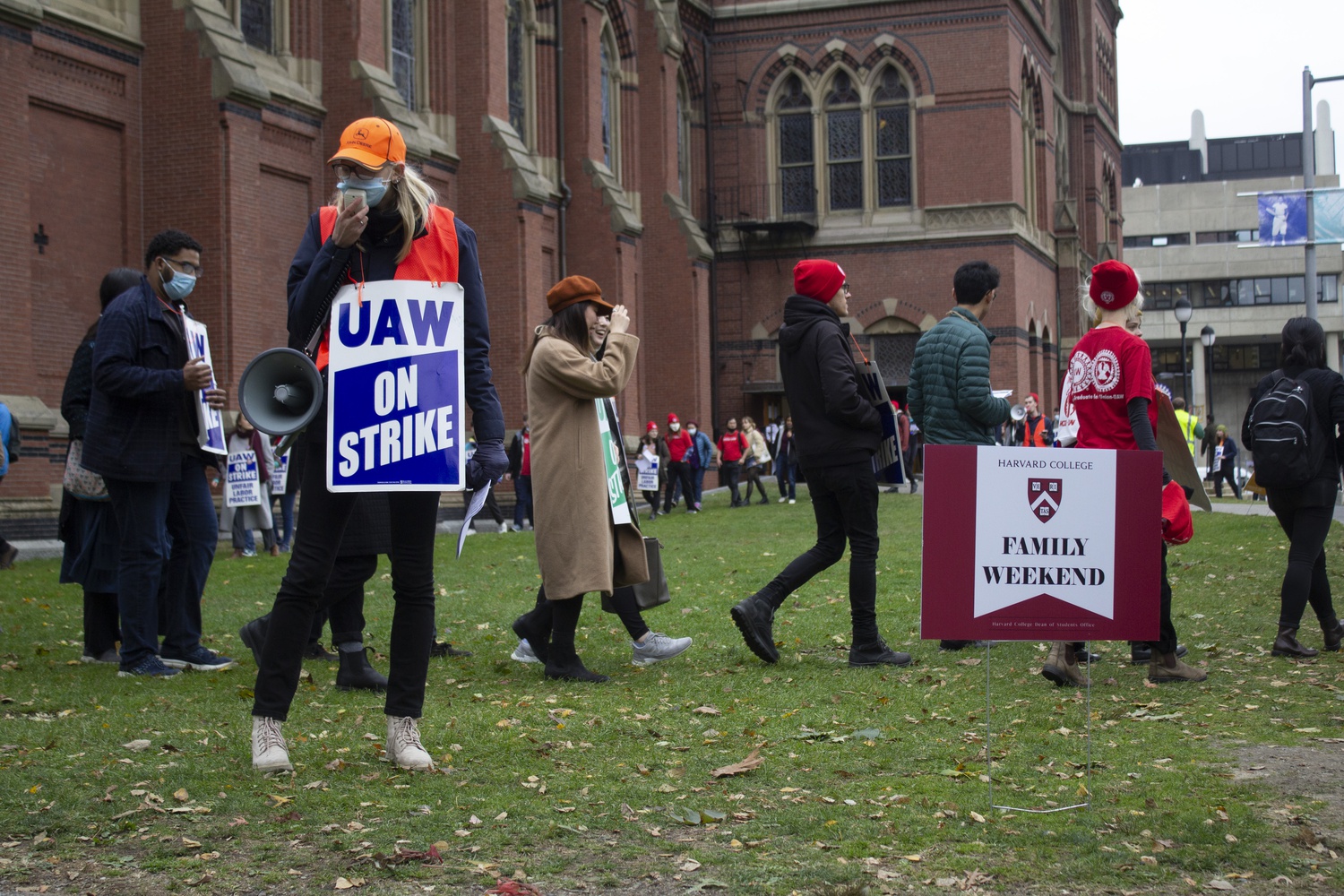 As parents checked in at the Smith Campus Center Thursday afternoon to receive schedules, maps, and badges, picketers marched through the building. On Friday, picketers passed out flyers in front of Sanders Theatre and the Science Center ahead of lectures open to parents. Strikers asked parents not to cross the picket line and that they email Harvard administrators in support of the Harvard Graduate Students Union-United Automobile Workers.

Arnold T. Stocker, a parent on his way to the Science Center Friday morning, said he found the picketing effective.

“I thought that whoever did the planning did an excellent job because they chose the family weekend to make a bigger impact on us, the parents coming in,” he said. “Now, we get an idea of how it affects our students, our kids.”

“We’re training [picketers] to be very positive and really engage in conversation, so not just hand a flyer but really try to connect with the individuals they’re talking to,” Rinberg said. “In some cases, parents will take a flyer and nod and keep going, but I’ve actually had a number of pretty involved conversations.”

The grad student union is striking to demand better wages and benefits, third-party arbitration and coverage of legal expenses in cases of discrimination and harrassment, and agency shop.

Rinberg added he thinks the union’s demands — specifically its push for new procedures to handle complaints of discrimination and harassment as well as its ask for higher wages given the University’s endowment returns — “really resonate” with parents.

“One of the big things we’re asking, of course, is not to cross the picket line,” HGSU-UAW member Steven A. Rizzo said from the picket line in front of the Science Center Friday. “The other thing we’re asking is for parents to contact Larry Bacow and Alan Garber, the president and provost, to let them know that the educators who teach their children are in need of a contract and better working and living conditions.”

Abbie P. LeBlanc, an HGSU-UAW member who was handing out flyers in front of the Science Center Friday, said parents’ reactions were “variable.” Some, she said, turned away; others seemed more receptive.

“I think they seem persuaded or they’ve encountered a new idea and are processing that, and some people aren’t receptive,” LeBlanc said.

Hea Pushpraj ’25 and her mother Aparajita Pushpraj did not attend General Education 1174: “Life and Death in the Anthropocene” to stand with student workers.

Though Aparajita Pushpraj said she is “in complete support” of the grad student workers, she lamented not being able to see a Harvard class after traveling all this way.

“This is the opportunity for me to see how she’s taking class,” Aparajita Pushpraj said.

Hea Pushpraj said she is morally opposed to crossing the picket line but empathized with her mom.

“She traveled a long distance to get here, and so she wants to see everything that was a part of the events,” Hea Pushpraj said.

“I’d like to see them get a living wage and be treated well,” Joshua Brown said. “I hope it works out for them. But honestly, it’s not really my battle to fight. If I cross the picket line, it’s because I want to go see what my kid’s doing, not because I do or don’t care about their concerns.”

Before 3:30 p.m., picketers marched outside of Sanders Theatre as parents lined up to attend Bacow’s welcoming address.

Inside, undergraduates and HGSU-UAW members interrupted Bacow’s speech and proceeded out of the auditorium in protest, asking families to join them. Strikers then picketed around the Science Center Plaza tent, where a reception was taking place.

Before the picket line dispersed as the three-day strike ended, strikers told parents: “We’ll be back!”

But the Browns said their priority is their daughter and her education.

“I want my child to receive an education which I’m paying dearly for,” Joshua Brown said. “In the end, I’m not so concerned how it gets sorted out. I just want to sort it out.”