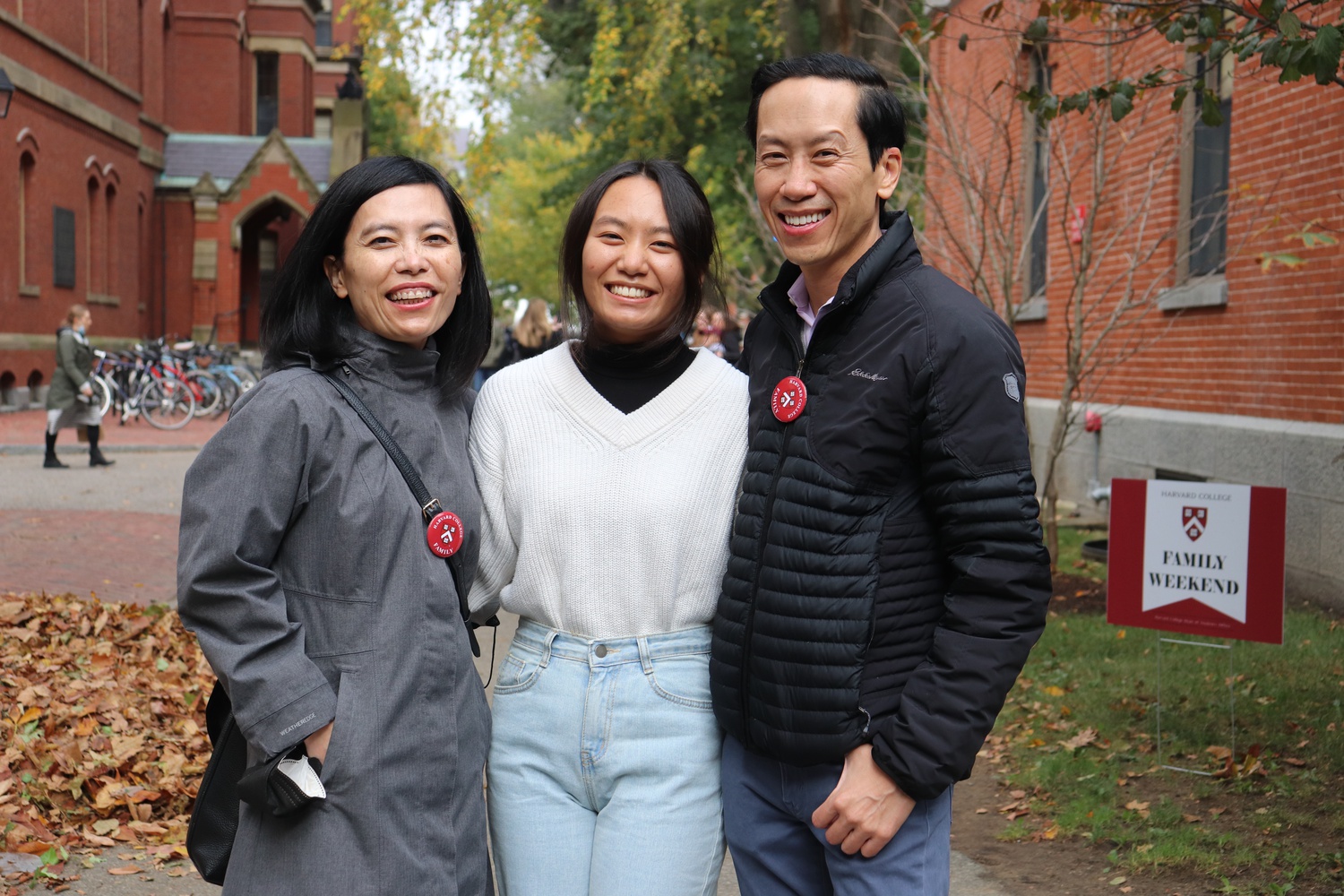 Parents, siblings, and relatives of the Class of 2025 had to dodge strikers and escape storms this weekend as they visited Harvard for First-Year Family Weekend.

Families began trickling into Harvard Yard on Thursday for the start of four days of programming. Wearing red badges emblazoned with “Harvard College Family,” parents explored campus, visited libraries, and attended classes such as Economics 10a: "Principles of Economics" and Computer Science 50: "Introduction to Computer Science."

The flagship event on Friday featured speeches from University President Lawrence S. Bacow and Dean of the College Rakesh Khurana, who spoke to a packed Sanders Theatre about the transition to college.

Moments after Bacow started his speech, he was interrupted by protesters supporting the third day of a strike by the Harvard Graduate Students Union-United Automobile Workers. Over 40 students and their supporters acquired red badges and snuck into the theater to stage the demonstration.

After the protest ended, Bacow continued his speech in which he expressed gratitude to parents for choosing Harvard as the next step in their children’s education.

“Thank you again for entrusting these remarkable young people to us,” he said. “It is a real privilege to be with them, to work with them, to teach them, but to also learn from them.”

Khurana spoke about how students will grow throughout their time at the College and the lessons they will learn.

“We want our students to understand that our society is not a machine that runs on its own; rather, it depends on good people who are willing to help recreate it,” he said.

Some parents decided to protest outside Memorial Hall rather than attend the speeches by Bacow and Khurana in support of the strike.

Carey Kasapidis — a parent visiting from Duluth, Minn. — said she skipped the event in solidarity with the strikers.

“We were outside with the crowd,” she said. “We never went in. We didn’t cross the line.”

Freshmen and their families also attended Fall Fest on Saturday, where they braved the pouring rain to tailgate ahead of the football game between the Harvard Crimson and the Dartmouth Big Green.

Despite heavy showers and a 20-17 loss for Harvard, parents said they enjoyed the football game.

“The weather is unfortunate, but it’s still fun to be here and experience it,” said freshman parent Carl Francioli.

Scott Riddle — a parent from Texas — also said he was having a good time at the game, though he was unimpressed with the level of football being played.

“I'm sitting here thinking about how many high school teams back in Texas would beat up either of these teams,” Riddle said.

Dean Graham, who was visiting from Chevy Chase, Md., described the weekend as “wonderful” and said the highlight was spending time with his son and learning about college life.

“Harvard does a really nice job for the parents to try to get a sense of what your kid’s life is like as a student,” he said.

Maria Cheriyan ’25 said it was difficult to find time for class work in between family obligations.

“It’s been a bit difficult balancing school and upcoming midterms with seeing my family, but it’s a necessary sacrifice,” Cheriyan said. “They also sacrificed a lot for me to be able to get to Harvard, so I’m glad that they can have this experience too.”

Other students encountered different struggles with welcoming their parents to campus and inside their dorm rooms.

Simon Sun ’25 said he put a lot of effort into preparing his space for the arrival of his parents.

“I cleaned my room for them, but they were not very impressed by it,” he said. “So that was sort of unfortunate.”