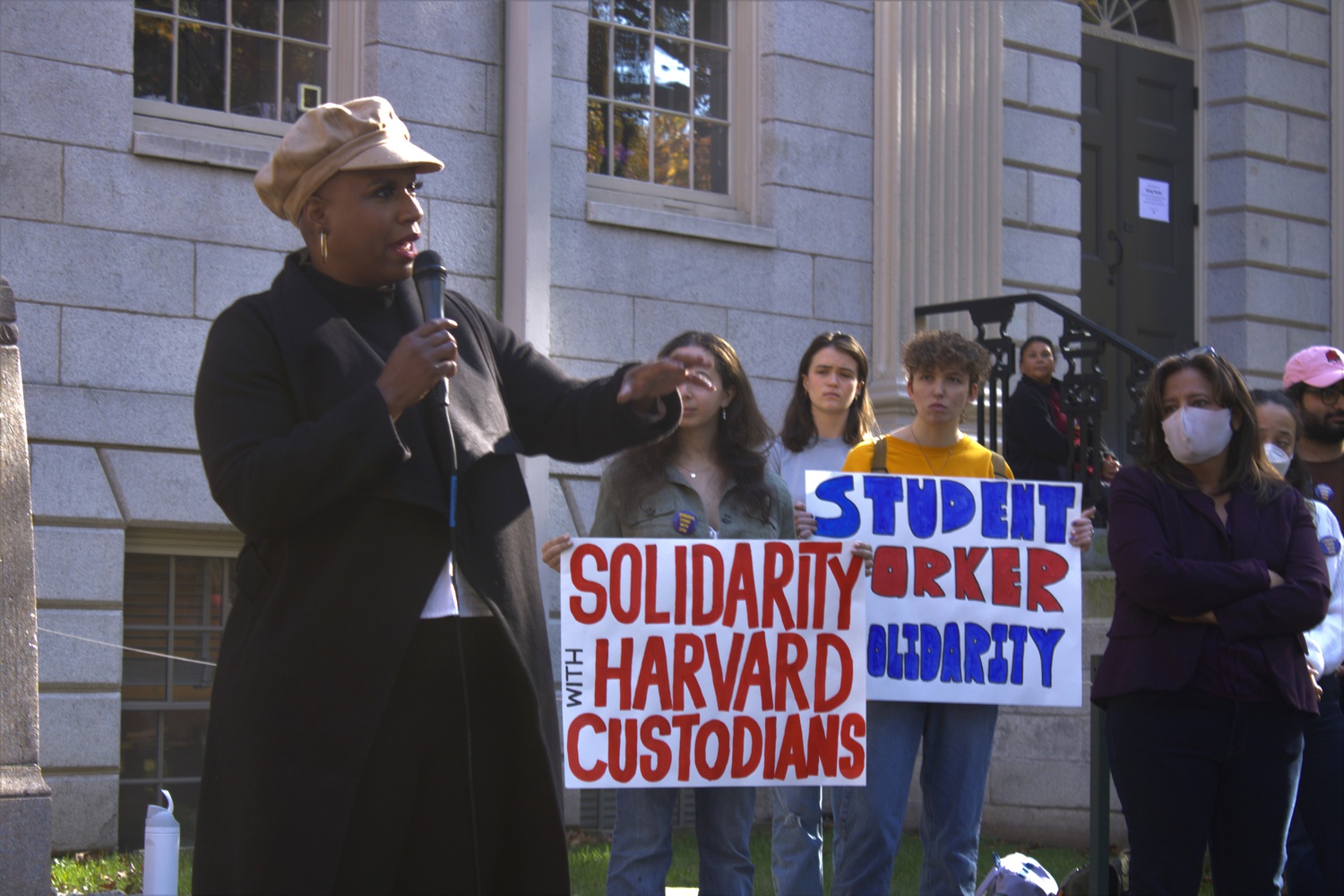 The Harvard College Student Labor Action Movement organized the event in conjunction with the Young Democratic Socialists of America in support of Harvard custodial workers and security officers, who are represented by 32BJ Service Employees International Union.

The union began negotiations in October for a new contract with the University; its current one-year contract is set to expire on Nov. 15.

According to SLAM, Harvard offered the union a five-year contract this week that included a 2 percent annual wage increase, which SLAM said fails to match the rate of inflation and does not meet standard living costs.

Roxana Rivera, vice president of 32BJ, said at the rally that the 1,000 Harvard workers the union represents “deserve a living wage.”

“We are coming off of a pandemic and we’re still in it — that hasn’t happened for a century,” she said. “Now, what is the richest University in the world going to do to help those families catch up?”

“This needs to be a recovery contract — one that gets people up and forward for the next four years,” Rivera added.

Harvard custodian Itelvina Fernandes told the demonstrators that workers are not asking for more than what they feel they are owed.

“It’s what we believe in and what we deserve,” Fernandes said. “With more than $53 billion dollars and they then come with 2 percent. They think we’re gonna be down, but that just makes us stronger.”

Doris E. Reina-Landaverde, who has also worked as a Harvard custodian for 17 years, said in an interview that she plans to carry out a hunger strike on Monday if Harvard fails to meet 32BJ SEIU’s demands before the contract expires that day.

“Most of us, we are immigrants, and most of us, we work two or three jobs because what we get here in Harvard is just for rent, but we need money for buying food, and this is what we are fighting for,” Reina-Landaverde said. “We want a fair contract, a better wage, because we need to bring the bread on the table for our families.”

Speaking at the rally, Pressley voiced support for 32BJ and its demands.

“Organized power is realized power,” Pressley said. “I think people get it twisted and think that we’re somehow making an appeal for a charity or trying to speak to their benevolence. This isn’t charity, this is reciprocity.”

“If we show them that we support them — that we’re cognizant of the amount of effort that they put in, and that they deserve to be treated fairly because of the work that they do to help us get a proper education — then that’ll give them the willpower and the courage to get through these negotiations,” Chopra said.

Members of other Harvard unions, including Harvard Graduate Students Union-United Automobile Workers President Brandon J. Mancilla, argued at the rally that Harvard had failed to provide sufficient wage increases to any of its unions in recent negotiations.

“It’s unacceptable to come to the workers that have sustained this campus during quarantine, and in this pandemic have made a pretty easy, seamless transition into an in-person semester again, and telling them ‘Oh, we can’t actually afford to give you what you need to survive in this city’ as the cost of living increases once again,” he said.

State Representative Michael L. Connolly, who represents part of Cambridge, said in an interview following the rally that “custodians do some of the most difficult work anywhere.”

“The notion that after all they did on the frontlines of this pandemic to keep the University open and to keep it running, the fact that the offer of a raise has only been 2 percent, which doesn’t even keep up with inflation, is incomprehensible and outrageous,” Connolly said.

In an interview after the event, Pressley said she hopes Harvard’s administration will meet the union’s demands.

“This is an august institution which develops world leaders,” Pressley said. “I think leadership is about empathy and compassion. And so it isn’t enough to produce leaders in the world who you’re asking to practice that, if the very institution itself is not.”