The Grad Student Strike is Over. What’s Next for Student Workers? 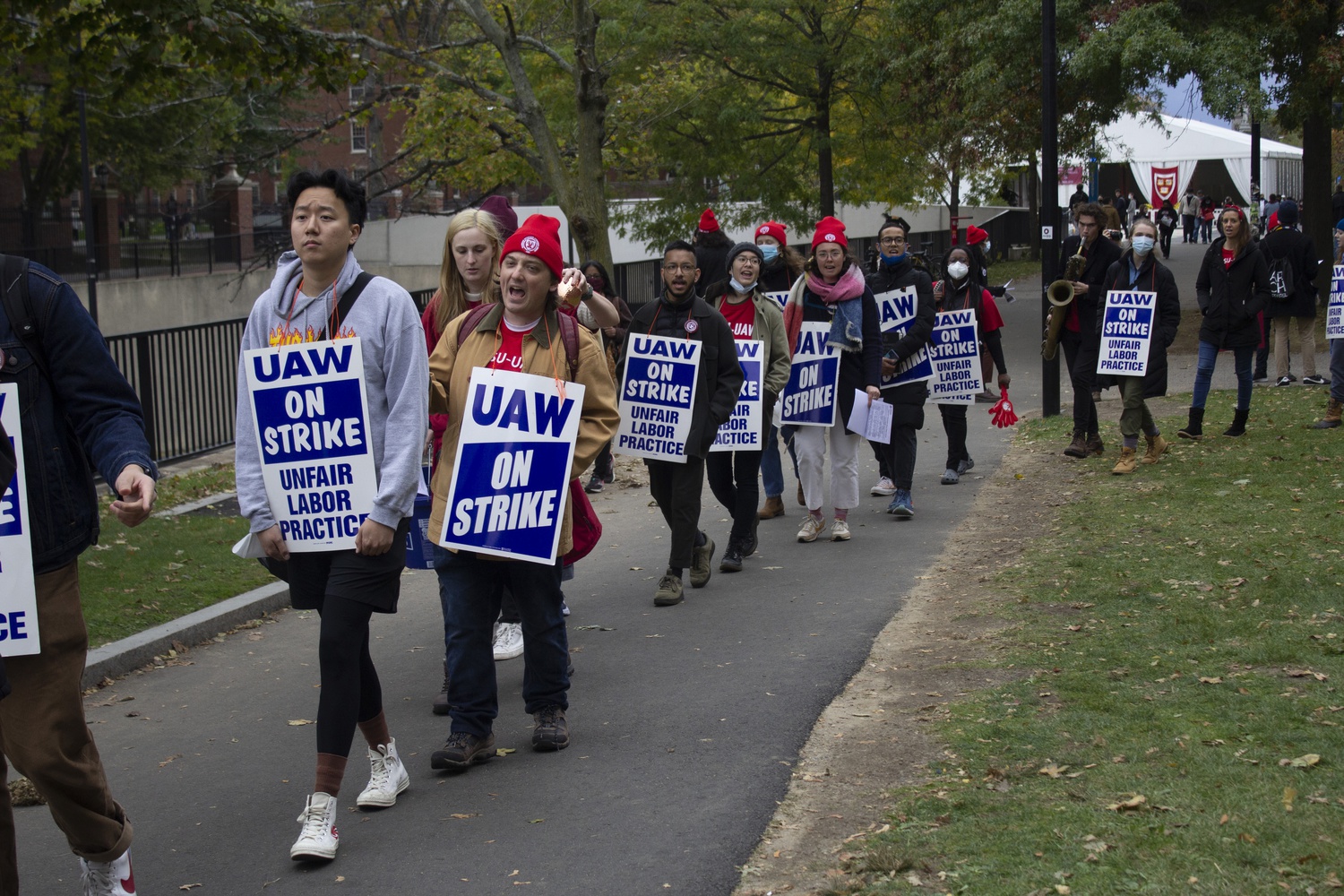 The graduate student union went on strike for three days last week, with some union members raising the possibility of a second strike later in the semester. By Aiyana G. White
By Cara J. Chang and Meimei Xu, Crimson Staff Writers

Harvard’s graduate student union reflected on its three-day strike at a membership-wide meeting Tuesday evening, discussing the University’s request for strikers to log hours of work withheld and next steps, including the possibility for a second strike.

The Harvard Graduate Students Union-United Automobile Workers strike started on Oct. 27 after more than seven months of negotiations for its second contract with the University failed to produce agreements on three fronts: compensation, provisions for non-discrimination procedures, and agency shop, which requires all student workers in the bargaining unit to pay some form of compensation for union activities or a student worker health fund. The strike ended Friday night.

On Saturday, Paul R. Curran, director of the Office of Labor and Employee Relations, sent an email to all student workers represented by HGSU-UAW. Curran asked student workers to fill out a form indicating if they withheld paid labor over the strike by Thursday.

“Based on the information provided, the University may seek repayment of compensation you received for labor you withheld during the strike,” Curran wrote.

“Harvard’s $53B dollar endowment is larger than the GDP of dozens of countries, but it’s trying to force underpaid student workers to repay three days of wages from last week’s strike,” Rachel A. Jacoby, a graduate student at the Kennedy School, tweeted.

Other supporters of the union also weighed in online, including U.S. Rep. Ayanna S. Pressley (D-Mass.).

“Dear Paul, I’m going to need you to give me a call about this,” Pressley tweeted, attaching a screenshot of Curran’s email.

While the National Labor Relations Act of 1935 protects workers’ right to strike, employers also have the right to withhold pay from strikers. In a union-wide email Saturday, HGSU-UAW leadership advised strikers to report their withheld labor to the University.

“It’s important for everyone who was on strike to say so, so that Harvard knows the full extent of our power,” they wrote.

Union leadership also asked members to email the University saying they do not consent to a wage deduction without negotiating with the union first.

Even as the union and the University assess the impacts of the first strike, HGSU-UAW membership discussed a possible second strike at the general membership meeting Tuesday.

HGSU-UAW President Brandon J. Mancilla declined to share specific plans, but said in an interview after Tuesday’s meeting that the union is waiting for the University to put forth another proposal. In the meantime, he added, union members “are going to keep fighting.”

Anatoly “Toly” Rinberg, a Ph.D. candidate in Applied Physics, said on the picket line Friday that he wants the decision to go on strike again to “be made democratically and collectively,” even though the September strike authorization vote technically authorizes the bargaining committee to call additional strikes through Dec. 31.

“It’s a decision that I want to see made democratically and collectively,” Rinberg said. “We’ll wait to see if Harvard offers us something that is palatable to our members. Right now, it’s not good enough.”

Steffan Paul ’19, a Ph.D. candidate in Medical Sciences, said in an interview Friday at the picket line they would not support a contract without new non-discrimination protections and raises that keep up with the rate of inflation.

“The fact that they are not giving us these very basic things, it’s kind of pathetic, and I think it’s about time we start expecting more from them,” they said. “So no, I’m not going to accept a contract that is subpar.”

Paul said they would go on strike again to achieve these demands.

“I think that at this point, we’ve shown our power, we’ve shown that we can disrupt, we’ve shown how much grad students do, and hopefully this will make bargaining move forward,” Carter said. “But if it doesn’t, then we will go on strike again.”